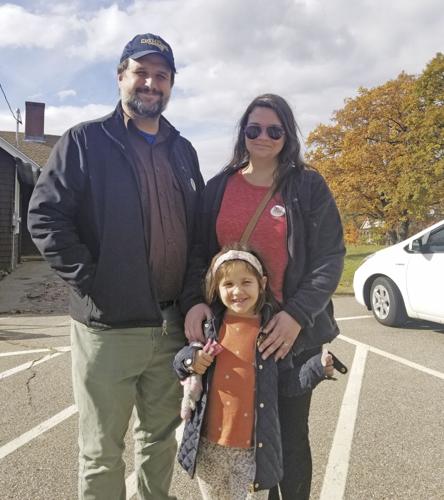 Ward 6 residents Wesley and Marie Becklo with their daughter, Evie. Voters on Tuesday were guided by many issues. The Becklos said their main concern was having a mayor they trust, whose values align with their own. (Robert Baker/The Laconia Daily Sun photo) 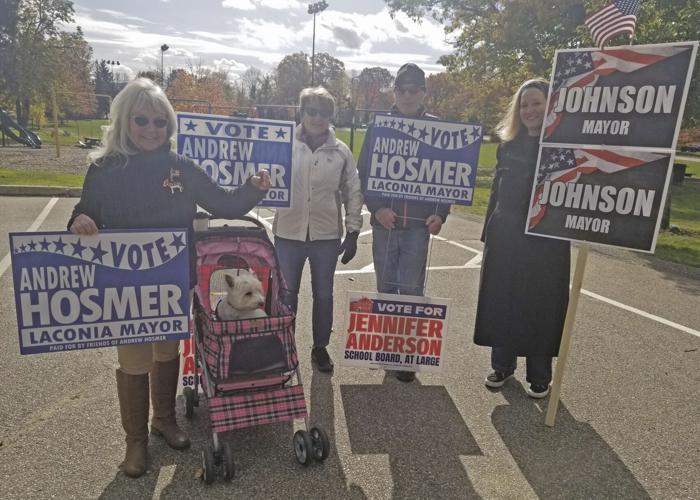 Ward 6 residents Wesley and Marie Becklo with their daughter, Evie. Voters on Tuesday were guided by many issues. The Becklos said their main concern was having a mayor they trust, whose values align with their own. (Robert Baker/The Laconia Daily Sun photo)

LACONIA — Voters pick candidates according to personality, whether they perceive values and ethics that match their own, and whether they like what is happening or believe it’s time for a change.

Many voters on Tuesday said the key issue guiding their choice was continuing the revitalization of the City on the Lakes – which includes a downtown, a tourist haven, and a community of residents and business owners who want affordably-priced housing as well as business growth, plus high quality education for their children.

"We love what's happening for Laconia," said Jim Rowe, who voted in Ward 6 with his wife, Barbara, and moved here from Lincoln in 2007. "Whoever is responsible for it, we're happy to see what's happening. The Opera House, everything is perking up."

Voters who were skeptical of city and school leadership complained of lack of transparency, civility and integrity. Many were dissatisfied with the state of the nation and the economy, want local taxpayer money to be carefully spent and schools to provide a solid foundation in the basics. Some had concerns that affect them personally.

“We need housing in the city for people who need to work,” said Marilyn Ireland, a Ward 1 resident who works as a quality improvement nurse at Concord Hospital – Laconia. “It’s not about everyone who can afford the new condos on the lake.”  She hopes the city will take over Eastman Shore Road, which is currently maintained by roughly 30 resident families, most of whom live there year-round. But that requires a unanimous vote, which is unrealistic, she said. “This is a very important issue for folks on our street. There are only a few houses left that are seasonal,” she said.

Randy Haas of Ward 1 was driven to vote to secure responsible, reasonable leadership. “It was the lesser of two evils. There were people I really didn’t want to see in a position. For the school board, it’s important just to have sensible people there who are willing to listen and talk and not be disruptive.”

“I want people who will work with other people in a calm and reasonable manner,” said Pat Anderson of Ward 1, who is retired and works as a volunteer. Anderson said she's heartened by recent changes in the city. “I like what they’re already doing. I’m seeing a lot of exciting things happening."

Her vote was cast, she said, “just keep moving forward for the future,” including with efforts to create affordable housing and improve public education. From the school board she’d like to see less contentiousness and a greater ability to work with people in the community.

Alison Hildebrand was worried about a shift in the perception and zoning of Weirs Beach, which is a primarily a resort, not an industrial area. As the city’s tourism hub, it remains “a cash cow for Laconia,” said Hildebrand who moved here from Chicago 14 years ago, and spearheaded the campaign to save the trademark arrow sign at the entrance to Weirs Beach. “It’s an unusual and wonderful place that’s been around for a long time,” she said. “If there’s too much modernization going on, sadly we might be losing the charm.”

Chris Krupp of Ward I wants to keep a lid on rising taxes. But he also champions the city’s rebirth. “We like the way the city’s being renewed," he said.

One Ward 3 resident rushing to get to work said her number one reason for voting was “making sure Dawn Johnson doesn’t become our next mayor. Her performance on the school board was atrocious.”

Another resident who declined to be named said it was important “to keep Democrats, liberals and socialists out” and combat the trend toward more spending, a weaker economy, and less personal choice. “I wanted to make certain that we have a fair education for everybody. Parents have a right to speak their mind. I believe in that,” he said.

In Ward 6, Janet Roger of Lakeport wanted “Sidewalks! I’m asking for sidewalks, which we can’t have.” Otherwise Roger said she’s happy with the city's trajectory. “I’m impressed with what’s been happening recently. The Colonial Theatre and the Lakeport Opera House.  New business and restaurants. Everything is a little bit more active,” said Roger who relocated here in 2019.

Former Laconia Mayor Mike Seymour said part of his focus in voting was to ensure that the city’s efforts to encourage development continue. He would like the city to simplify its rules and protocols to make Laconia “more user-friendly for business owners and residents.”

Middle class housing priced between $250,000 and $300,000 is in short supply and should be made a priority, he added. “Some of that is related to the economy, which we can’t control," he said.

Anne Grant, who lives in Ward 6, hopes the fate of the Laconia State School property will soon be decided. “It could be multi-use, with retail shops and housing. Housing is needed for younger couples who might have a child and for the elderly,” Grant said.

A Ward 6 voter named Susan, who declined to give her last name, said she hopes city officials will tackle the downtown parking garage, which is in severe disrepair. She is also unhappy about the way the sale of the mid-priced condos above the Colonial were handled. “I'm not sure they were put on the market, and whether it was a fair sale or not.”

Shawne Randlett, also from Ward 6, said she's concerned about the city’s current mix of housing, which remains out of reach for most. “There’s no low-income housing. Rents are terrible, and these people need a place to live.”

Dave Randlett, her husband, said fiscal responsibility at the local level topped his concerns. “With Biden’s economy, everything’s shot up in price” and production is moving overseas. “We need lower taxes and sensitivity to what families are struggling with,” he said.

“I’d give anything for a mean Tweet right now,” said Shawne. “We want to see people using our tax dollars well, not just at the federal level, but at the local level. Housing is absolutely out of reach. Rental rates are obscene. We have to do something about the job market. As far as I’m concerned, I’m going to vote for the values of the candidate, as far as I can discern them.”

Michael Mills of Lakeport, president of Mills Industries on Water Street, a manufacturer of plastic packaging, said he is dissatisfied with how hard the city seems on businesses, enforcing rules that seem arbitrary, outdated and inflexible – features that create an anti-business climate when the city wants to attract more.

“When I want to get something done, I have to call City Hall, which I now call Soviet Hall. Whether it’s planning or zoning or the school board, it’s time for change. They need to be more flexible on some rules. For instance, I have a factory and wanted to put signs saying 'shipping' and 'receiving' on the docks” to show trucks where to go “and was told I had used up my allotted square footage just with the sign on my building.”

Building permit fees for residences and businesses are discouraging, if not prohibitive, he said Mills.

Another problem has been what he called the incorrect posting of "10-ton limit" signs on his road, which serves factories and businesses that ship and receive goods and supplies year-round. “If a carrier’s trying to make a delivery, they’d be in violation,” said Mills.

“They’re not responsive about moving signs. An industrial business cannot function without pick up and delivery, but they didn’t seem to care. Between our four businesses (on this street) we have 200 to 300 employees. Do you want to shut that down? It’s probably not as bad as it used to be, but the reality of the day-to-day stuff, it just isn’t there.”

Mills believes there should be a community-wide forum on what local businesses need and need changed, “if you really want to bring in business.”

The school board conduct and decisions during the last year have been worrisome, too, said Mills.“There’s a huge disconnect between what they seem to be for, and what the average person wants.”

As with any situation, perceptions differ.

Miriam Moore, who lives in Ward 6 and works at Holy Trinity Catholic School, said her most important motivator are issues affecting schools. “I think they’ve done pretty well with what they’ve done. I’m happy with the people who are on the school board. It’s a hard job,” said Moore.