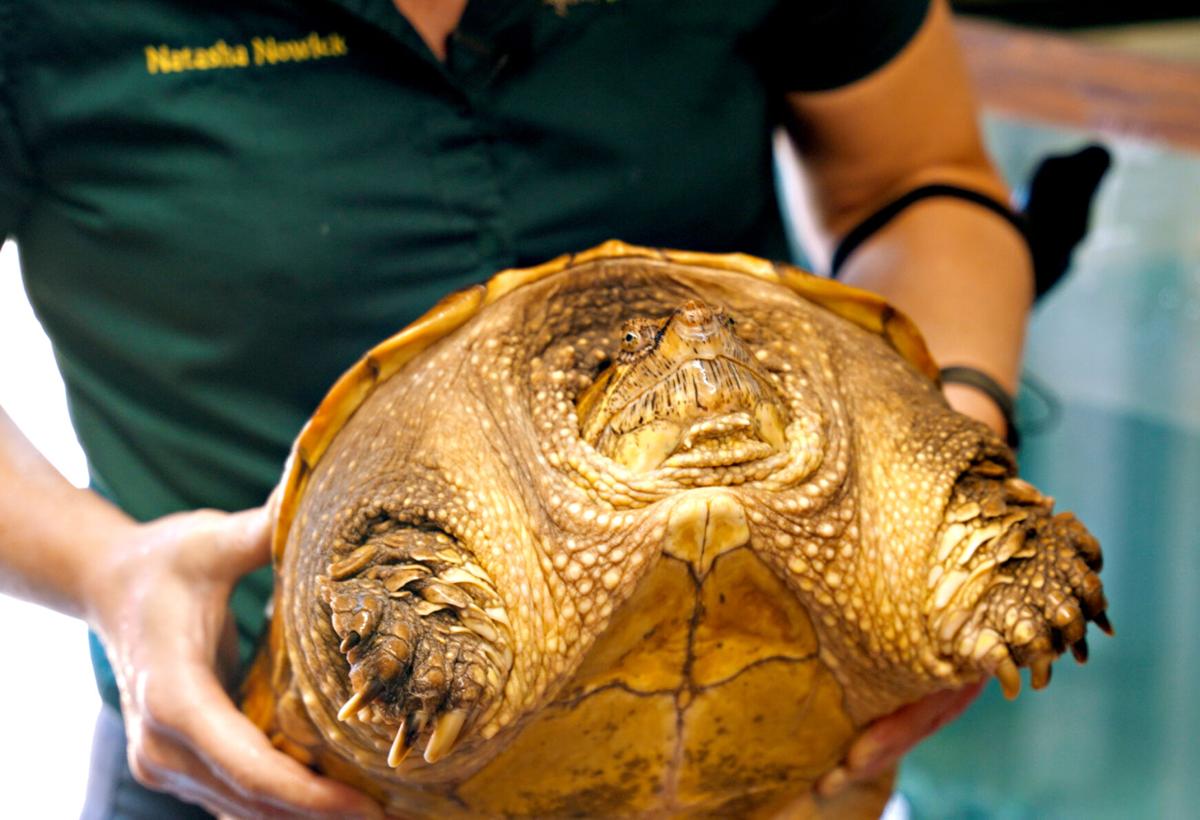 The turtle at Camaro Heaven is several pounds overweight. Turtle Rescue League officials say they will try to give it a diet with more vegetables, give it some exposure to sunlight and give it more exercise. (Bob Pierce/Courtesy photo) 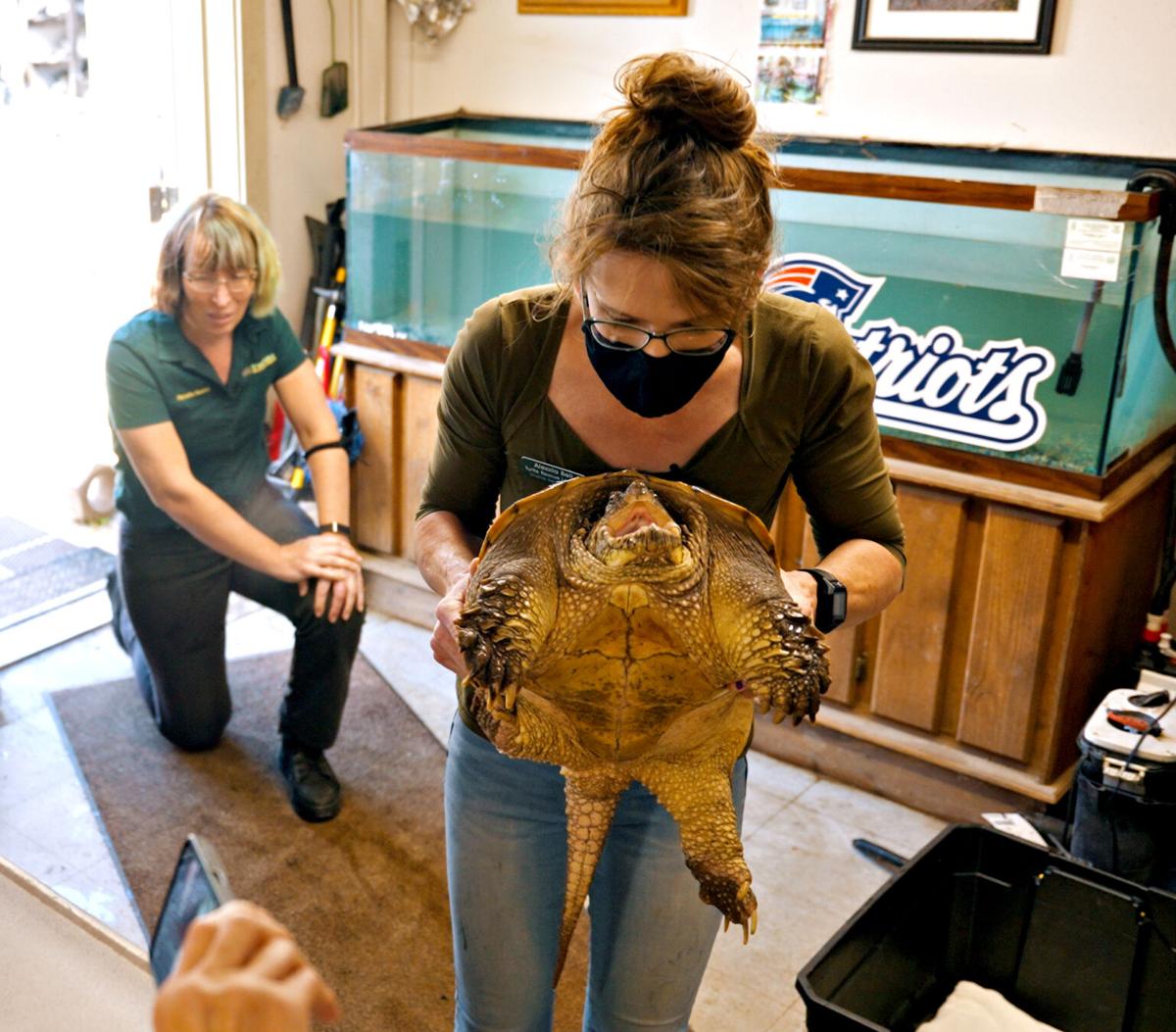 Natasha Nowick and Alexxia Bell of the Turtle Rescue League go to Camaro Heaven to take possession of a snapping turtle that has spent nearly a quarter century in a tank at the auto parts operation. (Bob Pierce/Courtesy photo)

The turtle at Camaro Heaven is several pounds overweight. Turtle Rescue League officials say they will try to give it a diet with more vegetables, give it some exposure to sunlight and give it more exercise. (Bob Pierce/Courtesy photo)

Natasha Nowick and Alexxia Bell of the Turtle Rescue League go to Camaro Heaven to take possession of a snapping turtle that has spent nearly a quarter century in a tank at the auto parts operation. (Bob Pierce/Courtesy photo)

TILTON — A snapping turtle named Shel-he, which has lived in a tank at Camaro Heaven for nearly a quarter of a century, has been moved to nicer accommodations maintained by the Turtle Rescue League in Southbridge, Massachusetts.

First order of business will be putting the snapper on a diet, said Alexxia Bell, president of the non-profit rescue organization.

Bell and Natasha Nowick, the group’s director, went to the office of the automobile parts yard last week to take Shel-he out of the tank so that it can begin a new chapter of its life.

Its caretakers at Camaro Heaven fed it shrimp, crayfish and other delicacies. The turtle, an omnivore, will now be fed more greens, providing needed calcium. The dietary change, a chance to roam and some exposure to sunlight should be good for it.

Although the turtle seems in good health and was cared for lovingly by the people at Camaro Heaven, the animal is overweight and its shell has a few irregularities, Bell said.

“The shell comes up a little in the back, like the spoiler on a 1967 Camaro,” Bell said.

“There are a few bumps and angularities on it, kind of like the wings on a 1957 Chevy, when it should be round like the body of a Ford Taurus.”

She weighs about 32 pounds, and she should be closer to 28.

Shel-he is currently in quarantine in a 110-gallon stock tank.

Eventually, she could get some outside time, and even meet some of the other more than 100 turtles being cared for by the rescue organization. She’s also been given a new name, Miekki, Polish for soft.

While snapping turtles are not endangered, they are getting scarcer. Only about one out of a thousand hatchlings make it into adulthood. Some can’t find water sources after hatching on dry land, some fall prey to other animals, some don’t survive a trip across sunbaked concrete and some are run over by cars.

Many people think they can break a finger with their bite, but this is not so, Bell said.

“They can’t do that at all, maybe a full-grown one could break a pencil,” she said.

Bell explained what she loves about turtles.

“They’re not potatoes with legs,” she said. “Each one has a unique and different personality. Some are scared, some want to come near you, some like strawberries, some don’t.”

“She’s very overwhelmed that she had been moved after 24 years. It’s going to be hard to tell what she will be like. I think she will be a bit of fun when she comes around and finds herself.

“It takes six months to a year for a turtle to show some personality.”

Joan O’Brien, a board member of the NH Animal Rights League, said those who rescued the turtle when found as a hatchling by the side of the road were well meaning, but she recommended that others do not follow that example.

They are wild animals, not to be kept as pets. When dealing with a wild animal, it’s best to get advice from an expert, with a view toward returning it to its natural habitat, a swampy or pond-like area, as soon as possible.

Chuck Drew, who owns Camaro Heaven, said he will miss the turtle and hopes to visit her when she becomes settled.

“You grow attached after a while, but I really just want what is best for her,” he said.

Thank you, Joan and the NH Animal Rights League, for making this happen. Finally, she (not it) will enjoy some freedom out of doors with room to move around and get exercise. It is not easy or inexpensive to take care of a large snapping turtle, so if anyone wants to help, please donate to the Turtle Rescue League of Southbridge, MA. https://www.facebook.com/turtlerescueleague/

Where oh where is Hilarious Hilary ?🤣🤣🤣