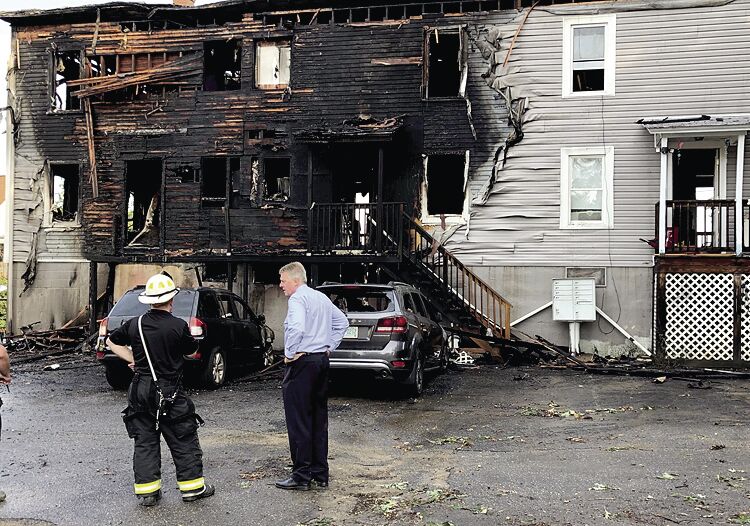 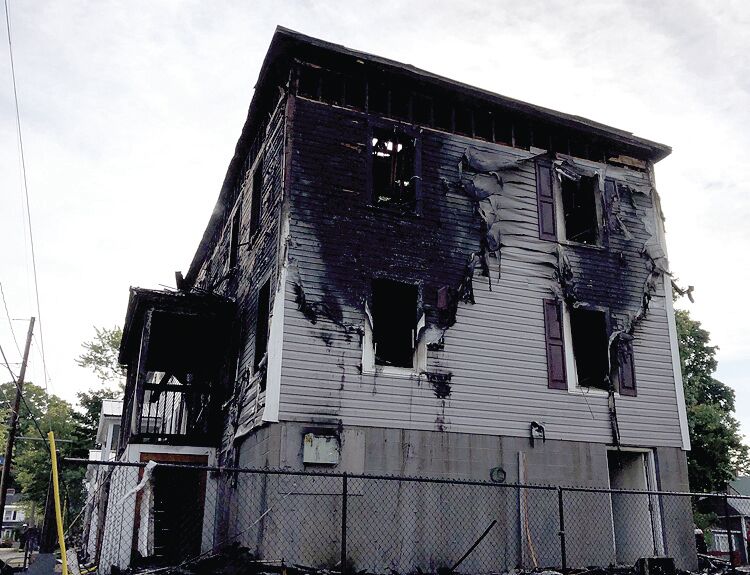 Charred wood and melted vinyl siding are all that remains at one end of an apartment building at 17 Dyer St., in Laconia, which was heavily damaged in a five-alarm fire early Tuesday morning. (Michael Mortensen photo/The Laconia Daily Sun) 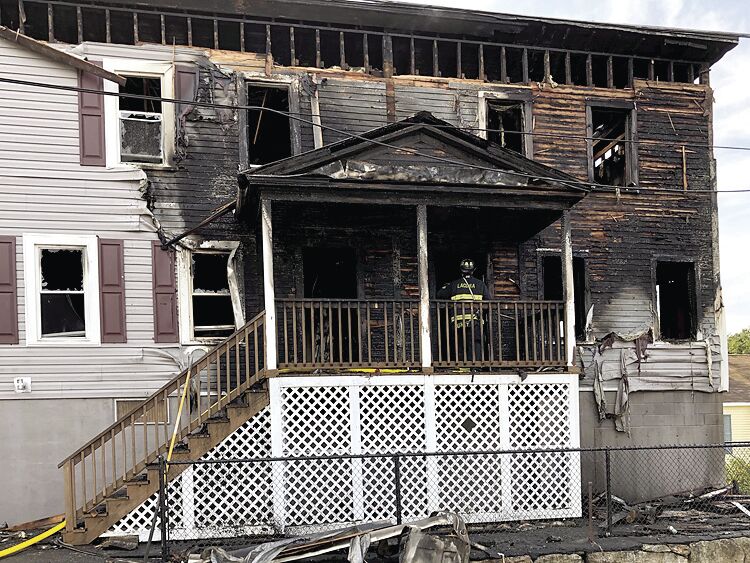 A Laconia firefighter enters one of the apartments at 17 Dyer St., in Laconia, which was heavily damaged in a five-alarm fire early Tuesday morning. The apartments shown in the photo were closest to where the fire started and received the most extensive damage. (Michael Mortensen photo/The Laconia Daily Sun)

Charred wood and melted vinyl siding are all that remains at one end of an apartment building at 17 Dyer St., in Laconia, which was heavily damaged in a five-alarm fire early Tuesday morning. (Michael Mortensen photo/The Laconia Daily Sun)

A Laconia firefighter enters one of the apartments at 17 Dyer St., in Laconia, which was heavily damaged in a five-alarm fire early Tuesday morning. The apartments shown in the photo were closest to where the fire started and received the most extensive damage. (Michael Mortensen photo/The Laconia Daily Sun)

LACONIA — With only the clothes on their backs, more than a dozen people fled their burning apartment building in the middle of night Tuesday, escaping a fire officials are calling suspicious.

The five-alarm fire heavily damaged the eight-unit apartment building at 17 Dyer St., where between 16 and 18 people lived, according to the building manager.

Misty Beaudoin, one of the residents, said she got to her 5-year-old daughter's bedroom just as the flames reached the room.

"I threw a blanket over my daughter's head and I had to get out of the fire and run her down the stairs," she said soon after fleeing the building.

Beaudoin's husband and a 13-year-old child were also able to escape safely.

"I have nowhere to go. I lost everything," she said.

Laconia Fire Chief Kirk Beattie said it appeared that the fire started outside at the rear of the building, and that he considered the blaze suspicious. Both the state Fire Marshal’s Office and the Laconia Police Department would be involved in the investigation, he said.

The fire was first reported 12:45 a.m. when several neighbors called 9-1-1, Beattie said. A neighbor hurriedly knocked on the doors to each apartment to alert those inside, many of whom were asleep.

Firefighters and equipment were on the scene moments after the initial call. The Laconia Fire Department’s Central Station is located 1½ blocks away.

The blaze eventually went to five alarms, making it one of the biggest fires in the city in recent years. Firefighters battled the flames for more than three hours before bring the blaze under control at 4:04 a.m., Beattie said.

Though the investigation is continuing, Beattie said it appeared that the fire began outside the west end of the 186-foot-long, two-story building which contains eight townhouse-style apartments.

The first floor of the end units quickly caught fire and the flames soon spread to the second floor. From there the fire burned through the ceilings on the upper floor and into a 2-foot-high attic. Once inside this space the fire then raced unimpeded through the attic toward the opposite end of the building.

The heat from the flames was so intense that it melted some of the vinyl siding of a house next door.

Beattie said six of the units received significant fire damage. The two units at the east end of the building had minor fire damage, but serious smoke damage, he said.

In addition, three cars parked behind the building were destroyed, the chief said.

Jacob Young, who lives across the street at 10 Dyer St., said he was sitting outside his apartment at 12:30 a.m., talking with a friend. They smelled smoke and then “all of a sudden the back side (of the apartment building) got really bright.” Young said he then ran across the street. When he saw the fire he ran from door to door awaking those inside and then called 9-1-1.

David Crawford, the property manager of the building who lived in the unit on the opposite end of the building from where the fire started, said he was in bed when he heard someone pounding on his door “yelling and screaming.”

Ian Patterson, who lived in the unit next to Crawford, said he too was awakened by people “yelling fire.”

Beattie said the smoke detectors in the building were working.

He noted that multiunit buildings being constructed today would be required to have so-called fire walls reaching all the way to the roof so that fires could not spread so easily to adjoining units.

The building is owned by ETW54 LLC and Keystone Properties of Concord.

A woman who answered the phone at Keystone’s office and identified herself only as a company employee said, “We have no comment.”

The owners bought the property in 2017. The building is currently assessed at $297,400, according to records on file with the city’s Assessor’s Office.

All apartments are currently uninhabitable, Beattie said. Electricity and gas to the building were disconnected as a precaution.

The Red Cross is providing assistance to 14 people who were displaced by the fire, according to Ann Kim, a spokesperson for the Red Cross’s Northern New England Region. She said the assistance includes temporary housing for those who need it, clothing, and emotional support.

State and local investigators remained on the scene until about 4 p.m.