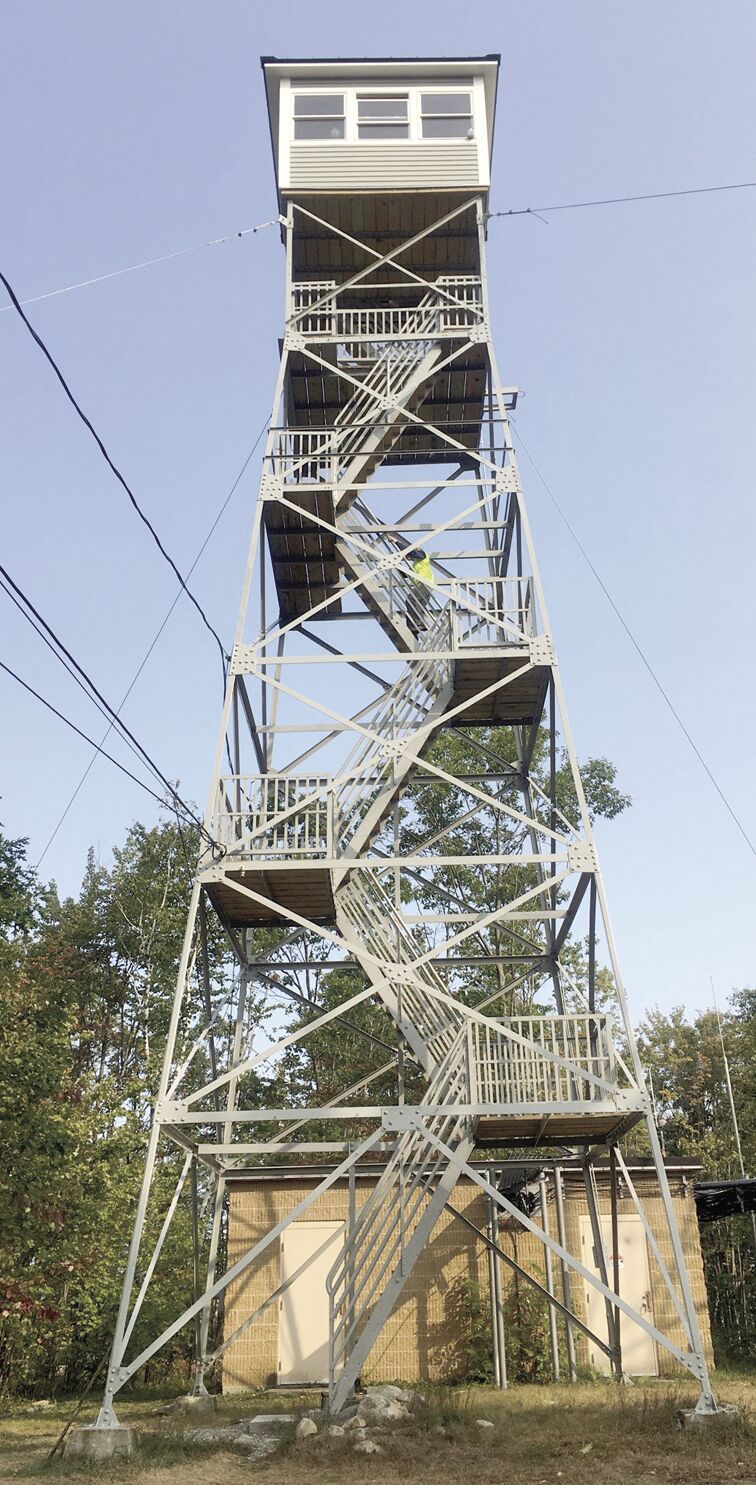 Hiker Judy Caron of Boscawen (in yellow) climbs the Oak Hill fire tower on Wednesday. The state has 15 towers, including one on Belknap Mountain. (Rick Green/The Laconia Daily Sun photo) 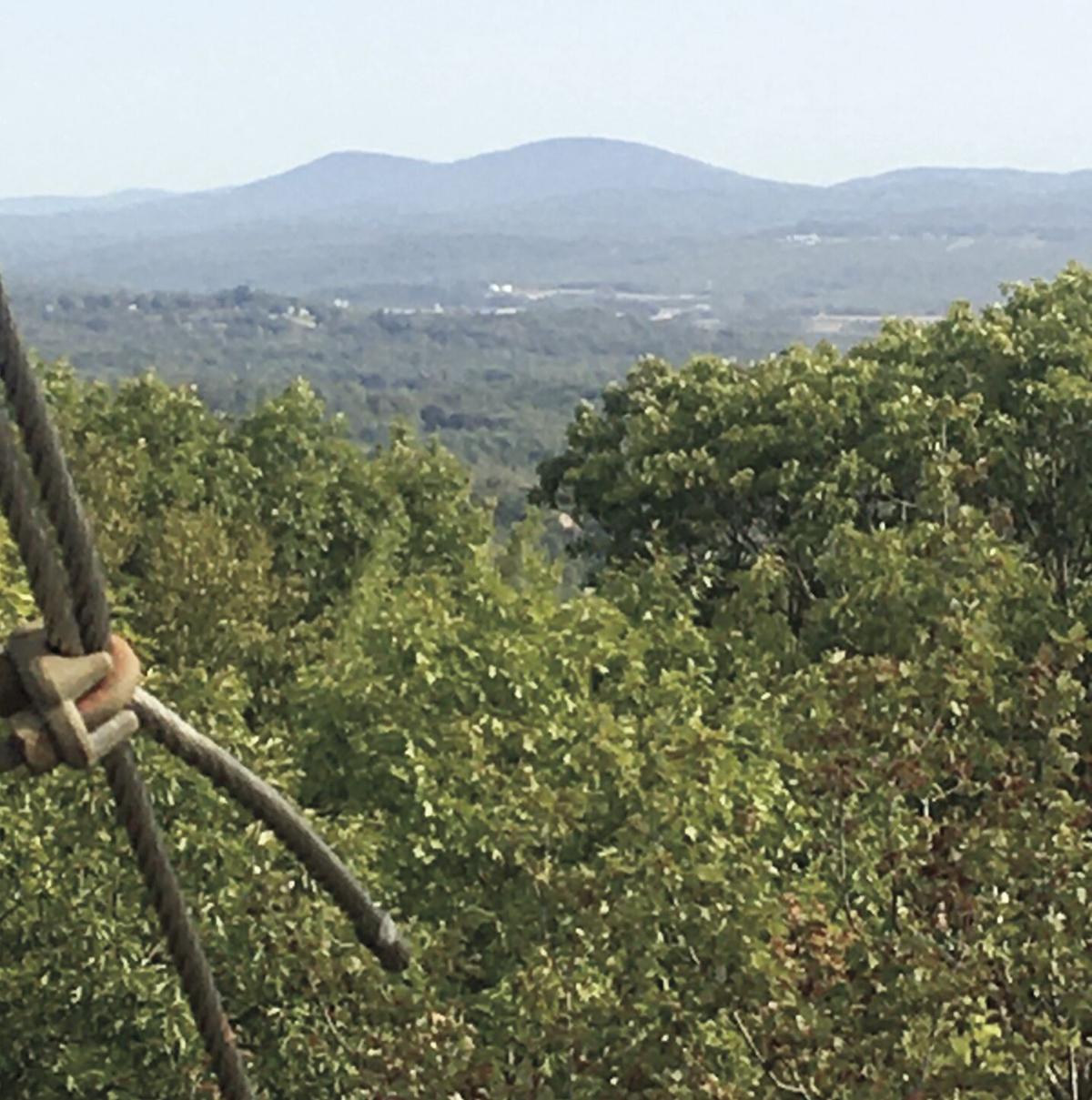 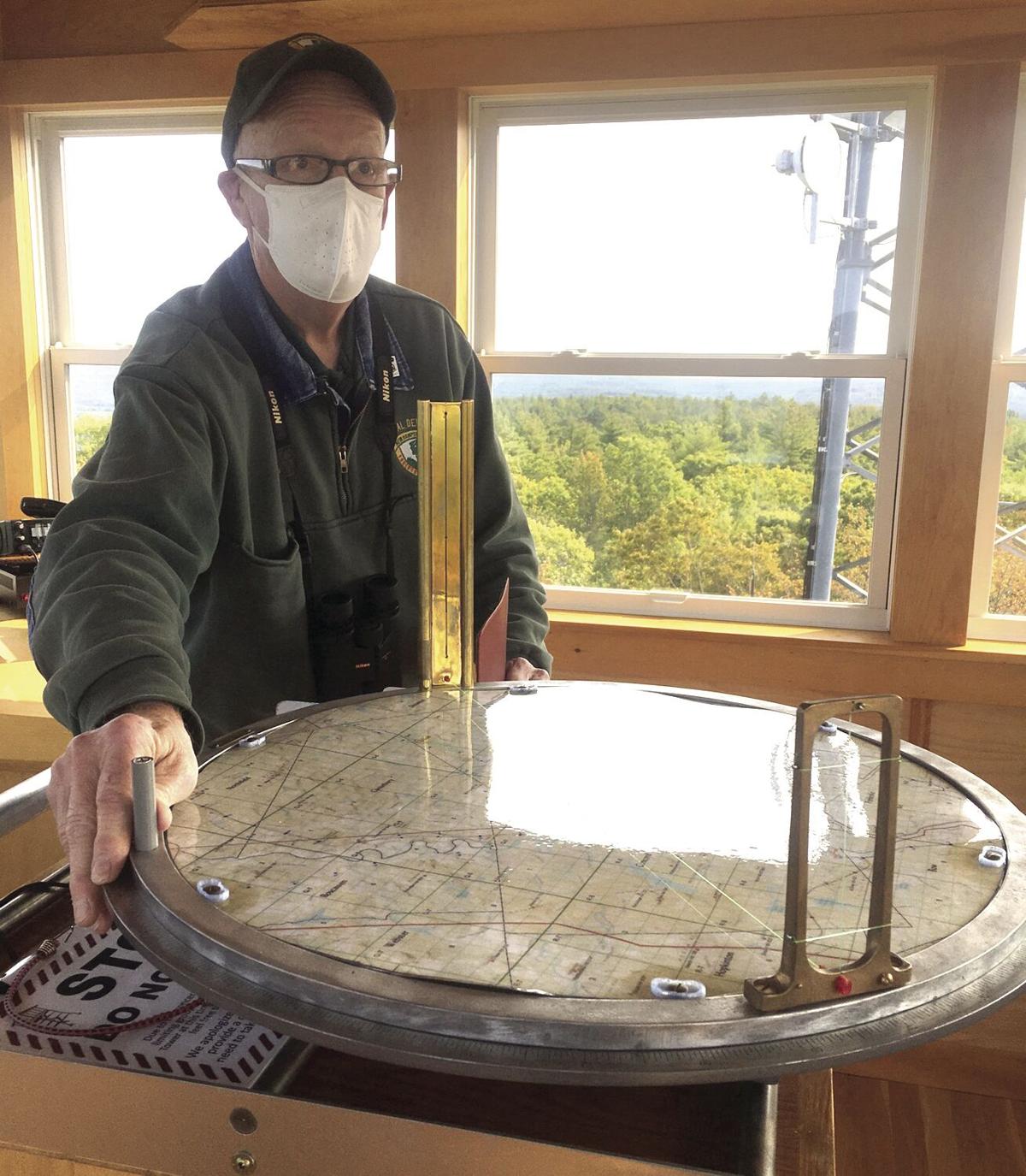 Hiker Judy Caron of Boscawen (in yellow) climbs the Oak Hill fire tower on Wednesday. The state has 15 towers, including one on Belknap Mountain. (Rick Green/The Laconia Daily Sun photo)

He was looking for any telltale traces of smoke on a day with Class 4, or very high, fire danger. Warm, windy conditions and low humidity meant that any fires that did get started could spread rapidly.

As a tower watchman, he has a duty to give ground crews the information they need to locate a fire.

He uses a fire-finding device called an alidade. It is essentially a flat circle that rotates.

Sanborn gets a fire in its sights and obtains a bearing. Watchmen in other towers, including at Belknap Mountain, will also take a bearing on the fire.

Sanborn and his counterpart at the Belknap tower worked together on locating a fire Tuesday in the Concord area.

“I also sent a picture to the Concord battalion chief and they were able to figure out how they were going to get in,” Sanborn said.

Fire departments are responsible for initial attack on blazes in New Hampshire. If fires can be spotted when they are small, they can be extinguished faster, saving time, money, property and potentially injuries or deaths.

“If they burn uncontrolled for two or three days and we’re dealing with hundred-acre-fires every time, it’s a huge burden on communities that still have volunteer firefighters,” Miner said. “We try to supplement with our staff, but we’re pretty limited as well.”

The state only has five full-time forest rangers in the field, with two more now going through a training academy. There used to be 13 rangers and a seasonal program before budget cuts and a hiring freeze reduced staffing.

The New Hampshire Division of Forests & Lands maintains a statewide system of 15 fire lookout towers. Some are accessible by cars, while others are at the end of a hiking trail.

“There are a lot of gaps. We don’t have the ability to look into every valley anymore, but we’ve made arrangements with the Civil Air Patrol,” Miner said. “They need training time for pilots. We pay some of their operational costs.

“On days when we are very concerned about fire danger we’ll set a predetermined flight with the CAP and they’ll check in with every fire tower as they go on a predetermined route, looking into those areas where the towers are no longer positioned to see.”

In the 1930s through the 1950s, there were about 60 fire lookout towers in the state and about 40 more observation points at various high points, even basic ones like barn cupolas, Miner said.

“The first fire tower in New Hampshire was Croydon Fire Tower and that was in 1913,” he said. “A lot of it goes back to the New Hampshire Timberlands Owners Association.

“The large landowners back then realized with the great fires that were happening in the North Country, they needed to make some effort to protect their investment. A lot of the valuable timber was burning on lands they were trying to manage.”

All but one of the fire towers are open to the public. Visitors are frequent.

“It’s a gorgeous day,” she said as she reached the viewing deck. “I just see a little bit of haze. I can’t wait until more trees change to their fall colors.”

When she returned to the ground she said the view from some fire towers is as good as that of some 4,000-foot peaks.

She has bagged her share of 4,000-footers and she also enjoys the “52 With a View” peaks, but now she’s not venturing far afield.

“I’ve been just hiking locally as makes sense with Covid. I’m not interested in being on crowded trails.”

The state has a “Tower Quest” program that provides a patch for those who visit at least five of the state’s fire towers.

Miner said the days have been a little on the hazy side, perhaps because of the fires burning in the Western United States.

“When it’s really clear, you can just see the glint of light off the windows at the Prudential Tower in Boston from here,” he said, looking out the window from atop the 50-foot Oak Hill tower.

Public asked to be careful with burning

LACONIA — With all of the state in either a moderate or severe drought, this fall could be a challenging forest fire season, New Hampshire For…