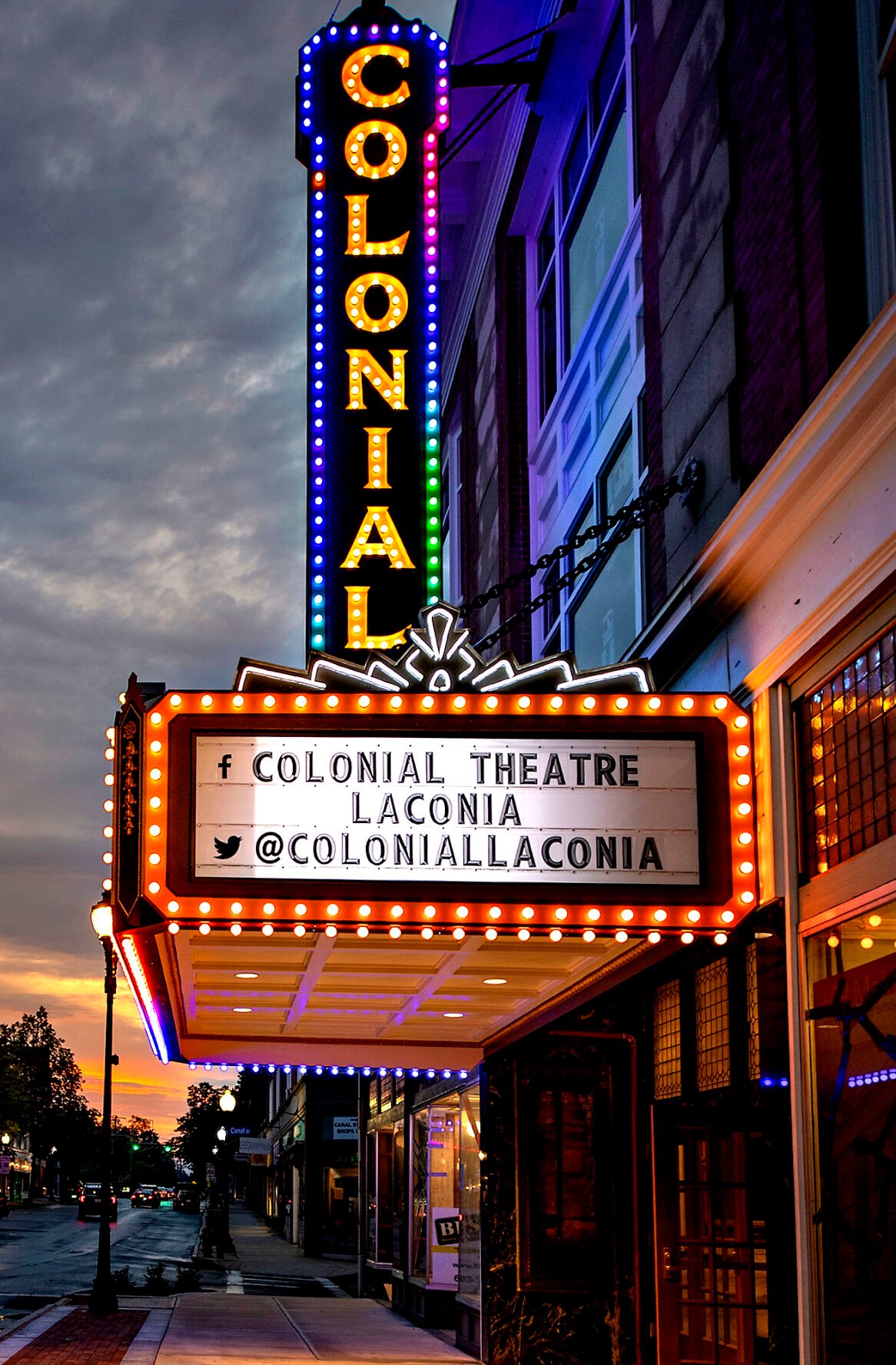 The marquee in lights at the Colonial Theater in Laconia, NH. (Karen Bobotas Photo/for The Laconia Daily Sun) 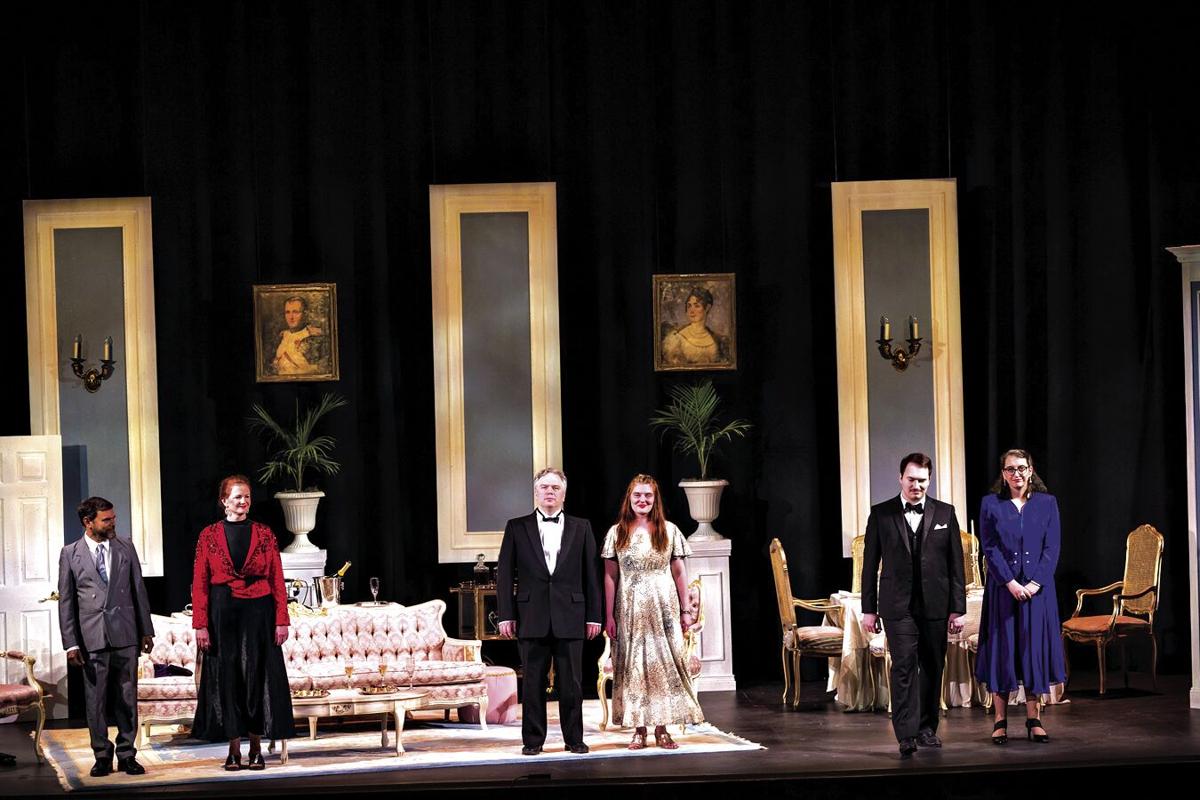 Neil Simon's "The Dinner Party" was the first dramatic production put on at the Colonial Theatre since it was renovated. (Courtesy photo)

The marquee in lights at the Colonial Theater in Laconia, NH. (Karen Bobotas Photo/for The Laconia Daily Sun)

Neil Simon's "The Dinner Party" was the first dramatic production put on at the Colonial Theatre since it was renovated. (Courtesy photo)

LACONIA — When Stephen Duprey, a developer who spearheaded the revitalization of Concord’s Main Street in the 1990s, surveys the City on the Lakes, he sees a downtown poised to take off.

The foundation for economic revival is the restored Colonial Theatre – now a regional arts venue, one that will lure visitors and arts and culture enthusiasts who will discover or re-discover Laconia.

“It brings people into the community that otherwise might not show up on a regular basis,” said Duprey, who helped obtain state and federal funding to create the Capitol Center for the Arts, which opened in a restored Concord landmark in 1996. More recently, Duprey developed the Bank of New Hampshire Stage plus retail and office buildings across on Main Street – buildings that contain Gibson’s Book Store and the League of New Hampshire Craftsmen on the ground floor. “The arts usually go in first then others follow,” Duprey said.

Boosting Laconia’s arts and entertainment scene are performances at the newly renovated Lakeport Opera House, and ongoing cultural events and exhibits at the Belknap Mill, which further fuel the engine for growth.

“The average person coming in to buy a ticket spends a lot of money in other places, including in shops and restaurants, and that creates a ripple effect,” Duprey said.

It’s a chain reaction that Duprey predicts for Laconia.

On Tuesday, September 21 from 5 to 8 pm at the Lakeport Opera House, Duprey, Mayor Andrew Hosmer and local business owner Karen Bassett will lead a community-wide conversation at LAKEVIEWS: Downtown Development Panel Discussion and Artful Networking Reception. The event, which is free and open to the public by reservation, will be followed by a cocktail reception hosted by NH Business Committee for the Arts, which will include a demonstration of augmented reality – a system that enables art lovers to virtually experience New Hampshire works of art from any location.

The goal of the forum is to share ideas and expertise and turn enthusiasm into drive. Rebirth requires strategic planning, community consensus building and taking critical, proactive steps to make downtown a desirable destination, Duprey said.

Certain elements are key, including restaurants and shops that stay open weeknights and weekends, creating a safe, well-lit place for visitors to meander and spend time. Wherever possible, offices that close at 5 or 6 pm should occupy upper floors, said Duprey, saving first floor visible space for enterprises that cater to consumer interest, appetites, entertainment and spending.

Stores and signs should be colorful and brightly lit, making downtown a safe and inviting place to walk at night – and not-so-subtly planting the desire to return. Outdoors banners that change monthly and flowers that look fresh and change with the season create a happy and appealing street.

Duprey said the domino effect of the arts can be profound.

A 2010 survey of spending by arts businesses and non-profits in Concord, including salaries of employees and the amount of money ticketholders and arts-goers spent downtown after going to exhibits and performances, showed the arts sector contributed $17 million annually to Concord’s economy.  That doubled to $34 million by 2015, said Tim Sink, president of the Greater Chamber of Commerce.

The Capitol Center for the Arts, the state’s largest indoor performing arts center with 1,300 seats, “has had a huge impact on downtown Concord,” said Sink, turning the southern part of Main Street into an extended culture and business district. “Whenever the CAP has a sellout show, hotels fill up and the restaurants get slammed,” he said.

Surveys of visitors have shown that, on average, every ticket buyer spends an additional $30 to $40 in the immediate area, usually in restaurants, Duprey said.

“With remote work becoming more common, people are discovering they can live and work in an area they previously might not have considered. The communities growing the most not only have natural beauty like the Lake Winnipesaukee area, but a vibrant cultural and arts scene, which is almost an essential item on checklists for people who are deciding where to live and work remotely,” said Duprey. In greater Laconia, compared to Portsmouth, “You probably have more affordable housing, and a great lake. But you need more things for people to do. Arts and culture are a key part of that.”

Duprey said that a study five years ago on the effect of Concord’s Capitol Center for the Arts found that 60% of its audience comes from outside Concord and Merrimack County. Even if restaurants aren’t within walking distance, it’s important to offer meal-deal packages to ticket holders, who are then willing to drive to dine, he said.

After the arts colonized Concord, O’s Steakhouse opened within a short walk along with Revival, and Constantly Pizza has reported a constant flow of customers, Duprey said.

“Every bank in the state has moved to Concord since the downtown redevelopment,” he said. For businesses, a key factor in employee retention is quality of life. “It’s not just having a hospital or a good school system. It’s recreation, parks and a vibrant cultural life.”

In Concord, Duprey built the 100,000 sq. ft. “Smile” building and 70,000 sq. ft. “Love Your Neighbor” building next door “because there were businesses with employees who wanted to be able to walk to lunch downtown,” and stay for after-work events.

Most people underestimate the impact of arts and culture to a region’s economic base. According to a report by the U.S. Bureau of Economic Analysis in 2017, the arts and culture sector contributed $2.6 billion to the New Hampshire’s economy four years ago, or 3.3% of the state’s GDP, which includes the year’s receipts for New Hampshire-based goods and services, compared to $2.5 billion from the construction industry and $1.9 billion from educational services – which makes the arts a significant player.

“It’s an attraction that gets people excited to visit communities or go to events,” said Tricia Soule, executive director of New Hampshire Business Committee for the Arts, which has members from arts and business sectors.

“It’s what makes people want to move there and live. That’s what New Hampshire needs to attract and retain talented employees, young people and families,” said Soule.  She points to successful arts anchors in Portsmouth, Concord, Manchester, Littleton, Lebanon and Peterborough, and more recently, Newmarket, which now offers an art walk and outdoor concerts in the park in conjunction with its local tourism office.

“New Hampshire towns, no matter what shape or size, are embracing the arts,” said Soule. “The arts play a huge role in enabling New Hampshire to grow.”

For more information on LAKEVIEWS: Downtown Development Panel Discussion and Artful Networking Reception, go to www.laconiadailysun.com/site/sunevents. For reservations, go to