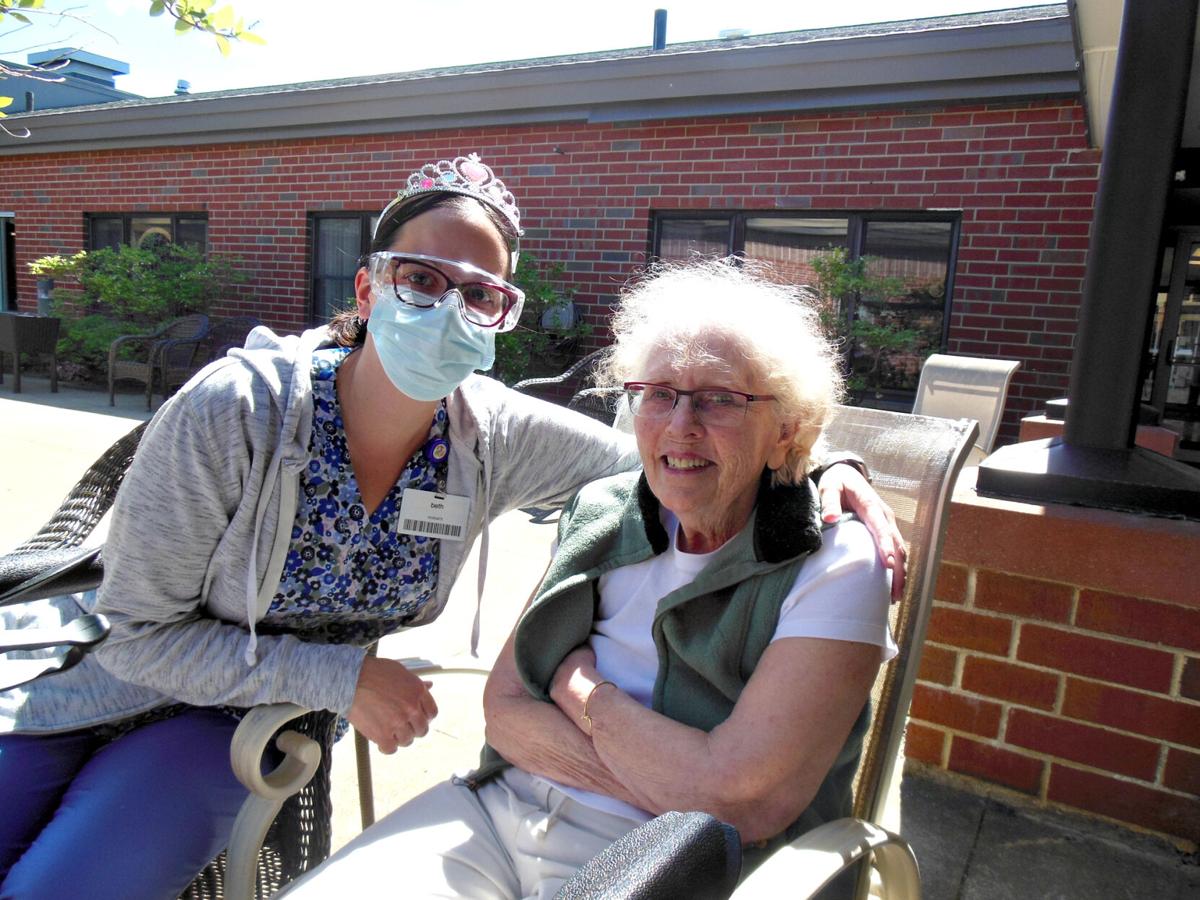 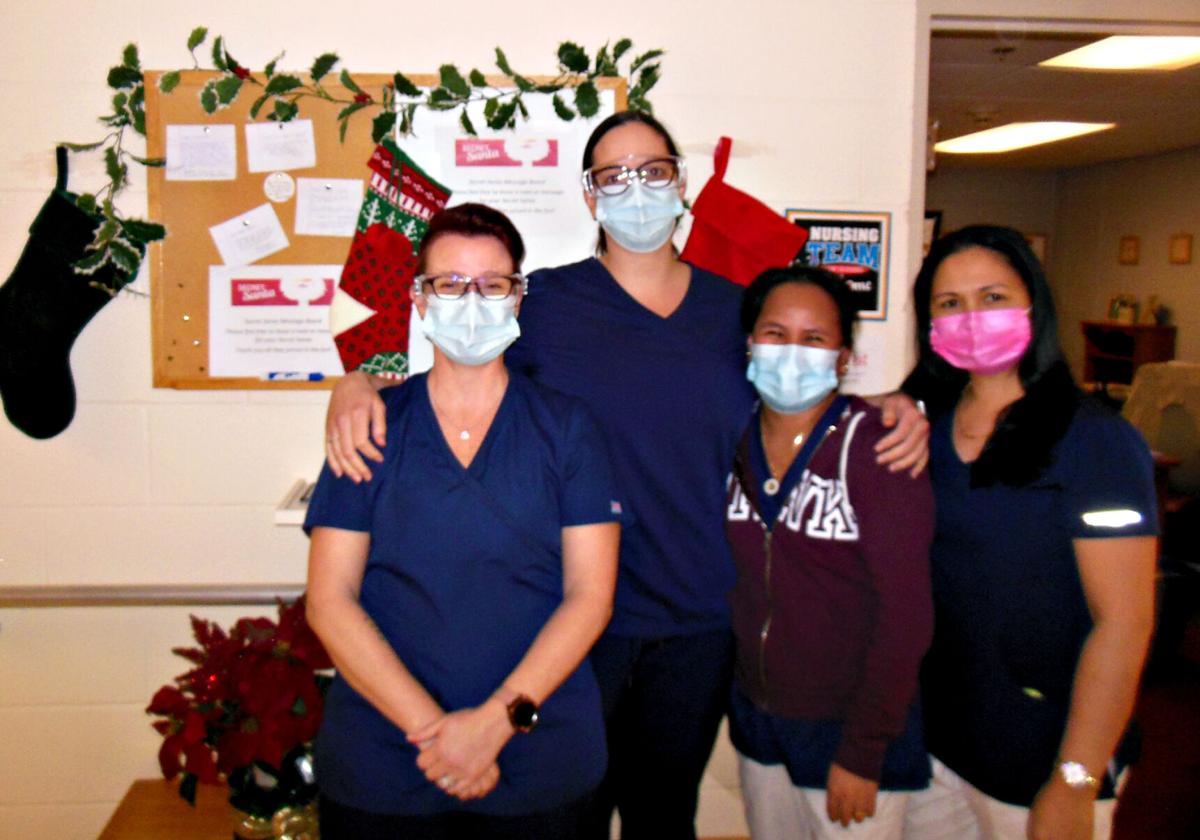 Four LNAs at Belknap County Nursing Home who took advantage of a career growth path. They had all had just graduated to become Medication Nursing Assistants. (Courtesy photo)

Four LNAs at Belknap County Nursing Home who took advantage of a career growth path. They had all had just graduated to become Medication Nursing Assistants. (Courtesy photo)

LACONIA — If it were up to John Miller, the direct care staff at Belknap County Nursing Home would get significant, permanent raises to keep them tirelessly caring for incapacitated residents in their final years, including his mother, Rita.

“I’m not sure how to put a dollar amount on compassion, dedication, love and commitment,” Miller told Belknap County Commissioners on Sept. 9, before they voted to boost the paychecks of strategic county workers by $200 a week through December, using funds from the American Rescue Plan. For licensed nurse assistants or LNAs, that translates to a jump of roughly $5 an hour, or a starting rate of $17.76 – which makes their wages competitive with nursing homes around the state, including private facilities that can offer $17 to $20 an hour.

Miller’s mother suffers from vascular dementia and is unable to be safely cared for at home. A nursing assistant at BCNH regularly rubs her shoulders and feet, and occasionally sneaks into her room at night to give her an ice cream treat, even though she’s not ordinarily supposed to indulge.

“How many times have I gone and seen an LNA or nurse dancing and singing to my mother?” said Miller, who lives in Belmont. “You find something you love and make it a job. I think these women have done that. People aren’t leaving the nursing home because they want to. It’s because they have to.”

Before the pay raise, some found they couldn’t live on the previous $12.76 per hour starting rate, which trumped their attachment to caregiving, according to nursing home experts. Working at home, including in data entry, allowed single moms, who comprise a significant population of LNAs, to avoid travel and childcare costs, said Brendan Williams, president of the New Hampshire Health Care Association, which represents nursing homes across the state.

The national shortage of health care workers and the exodus from nursing professions because of retirement or burnout is not a new situation, but it is growing and becoming more urgent across the U.S, according to current surveys. Particularly in rural areas, skilled help, including every level of hands-on care worker, has become harder to come by since the pandemic, Williams said.

“There are people who are still not working or who have chosen other paths,” said Lynn Carpenter, director of New Hampshire Needs Caregivers, a non-profit dedicated to bringing people into nursing and making their education affordable.

Early this month, Belknap County Commissioners voted to allocate federal American Rescue Plan funds to bolster compensation for nursing assistants from the beginning of August to the end of this year. The purpose was to stem the loss of all levels of nurses and make it possible to hire new ones and keep current employees from quitting, or relocating for better pay. ARP funds will also subsidize local LNA training.

It’s a critical short-term fix for a problem that festers, growing a little worse each year.

There are many reasons that nursing assistants are hard to find: low pay, long hours, work that is physically and emotionally draining, lack of flexibility in schedules, and sometimes little respect from patients or superiors, nursing home experts say. Meaningful work and attractive benefits packages that include retirement plans and health insurance are usually not enough to overcome lean pay.

It’s a long-standing challenge across New Hampshire, the nation’s second oldest state, where the number of nursing home-eligible patients is expected to increase - at the same time caregivers are dwindling.  Between March 2020 and June 2021, New Hampshire experienced a net loss of 226 working LNAs, according to the New Hampshire Board of Nursing. That doesn’t reflect the drain of registered nurses, licensed practical nurses or other patient-care related staff. The state is currently launching a campaign to attract health care workers to relocate here, and hoping to lure more traveling nurses, who may fill the gap temporarily, but are prohibitively expensive to retain.

“We’re all vying for the same staff,” said Shelley Richardson, administrator at Belknap County Nursing Home. “It affects how many new patients we can take, and it clogs hospitals” that can’t release patients to nursing homes. The fallout is fragile and chronically sick elders requiring a higher level of care, living tenuously at home while family members struggle to provide a fraction of what they need, and becoming burned out themselves.

“We’re at the proverbial fork in the road for our facility, one we want to maintain,” Richardson told the county commission early this month. BCNH currently has 18 full-time and six part-time vacancies. Because of that, the home currently serves 66 residents, down from a capacity of 94. Hallways have been closed to consolidate residents closer to where staff can serve them. Richardson said 38 staff retired or left BCNH since the since the start of the pandemic. The home has gained nine employees since January.  Since the county’s salary stipend was announced, BCNH has had three inquiries from potential LNAs who only wanted to work daytime hours. They weren’t willing to work the needed 3 to 11 p.m. shift or on weekends - even when Richardson said that would get their foot in the door, and they could switch to day shifts as they become available.

The temporary boost from ARP funds raises starting pay for unit aides, who do not provide direct patient care, to $16.59 an hour, and housekeepers to $16.28 an hour. Richardson believes the pay raise will certainly keep current staff on board, but it may not be as effective at pulling in newcomers.

Manchester-based Elliot Healthcare just announced a starting pay of $17 an hour for LNAs in order to staff that southern New Hampshire health care system. For some potential workers, the choice is tougher when Irving gas station convenience stores are also offering $17 an hour. When enough nurses can’t be found, some New Hampshire nursing homes are now paying $90 an hour or more for traveling licensed practical nurses or LPNs from out of state, said Richardson, with a significant portion of that going to the agency they work for.

There’s another detriment to hiring temporary staff, Severance said. Their increasing presence “can erode the culture of nursing homes, because they’re not vested in the nursing home itself, like a regular long-term worker, who loves the place and knows the residents well. Particularly in long term care, it’s about relationships, and some people thrive on that,” Severance said.

Belknap County Commissioners will vote early next year on whether to extend their support of strategic county workers by tapping ARP funds, by adding $150/week to their paychecks in 2022 and $100/week in 2023. At the county jail and Belknap County Nursing Home, vacancies have ballooned since COVID, and staff shortages are capping inmate and resident capacity.

To Debby Poire, an LNA who has worked at the county nursing home for four years, this year’s bonus comes as a sweet reprieve, an assurance that she’ll be able continue doing what she loves: caring for fragile and lonely people in need.

“This has been an uphill battle over many, many years,” Poire said. “We were overwhelmed with the (county’s) vote. It’s helping us move forward. This is our family. I’m with them more than I’m with my own family,” she said. “It all comes down to the heart. A lot of us are caregivers from a very young age. That’s all you know. A lot of us are here because we love the nursing home and love the residents. We’re in the mode of caring for people, and we love our jobs. Most of us will go in, juggle our schedules and put ourselves on the back burner.”

During COVID that meant 12-hour shifts, working on days off and coming back early from vacations, she said. For Poire, keeping residents safe also meant no summer parties or family gatherings at Thanksgiving or Christmas. “We worked ourselves beyond the brink of exhaustion,” she said.

“We are the residents’ and families’ emotional support system. We hold their hands and talk softly to them until their last breath," said Poire.“We’re on a rollercoaster ride that we can’t jump off of. The residents need us now more than ever.”

She said BCNH is the best nursing home she’s worked for. “No one brought COVID into Belknap County Nursing Home. We’ve got to be doing something right.”

Oh, we take care of your mother and you want all that do the work to get paid more. Well isn't that nice. Maybe reach into your own pocket instead, you know, to care for YOUR family. I'd rather save my money to ensure you and no one else have to pay to take care of mine. Shut down the county nursing homes, there's zero need for this intervention in the market.

One of the biggest problems with the LNA shortage I don't feel being a person who held an LNA license is the pay as much is the hours I would still have my LNA license if they hadn't taken it when my mom got sick and I lost my hours because of a death in the family not wanting to go back and take the test all over again getting a straight a on it but because I have problems with testing did it orally you know I got a straight a and I lost my hours that is why I do not now practice as an LNA I have all the knowledge and would volunteer anytime and give my hours without the pay to any of these nursing homes because of the shortages but hey don't have a license anymore people work without licenses all the time all over the state of New Hampshire and are getting paid more than lna are getting paid I think they should start a volunteer program with former LNA should be able to volunteer in nursing homes if they want to and help out to support the license lna's cuz I gladly give my time to these nursing homes why my son was in school. I would love to give back to my community and then I could earn my hours back to be able to test back in. What a great way to earn your license back for former lna's versus having to go back to school again to renew what we already know