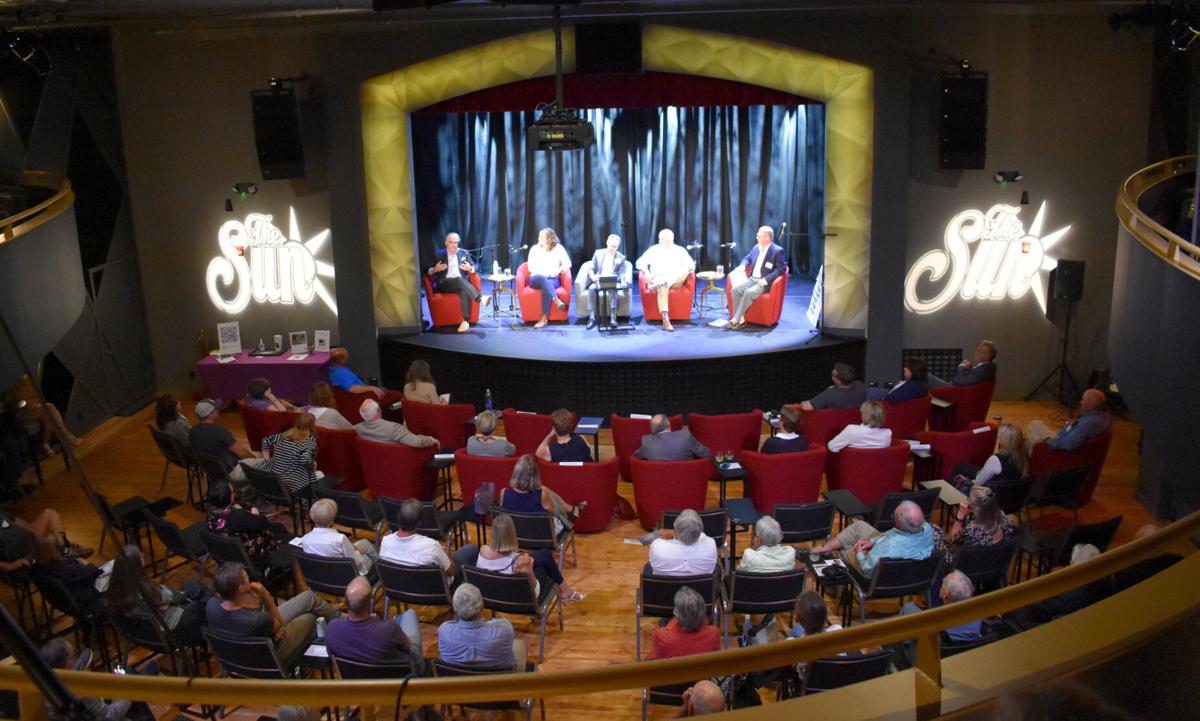 The first LAKEVIEWS forum focused on how to maintain and build upon Laconia's momentum of revitalization. (Adam Drapcho photo/The Laconia Daily Sun) 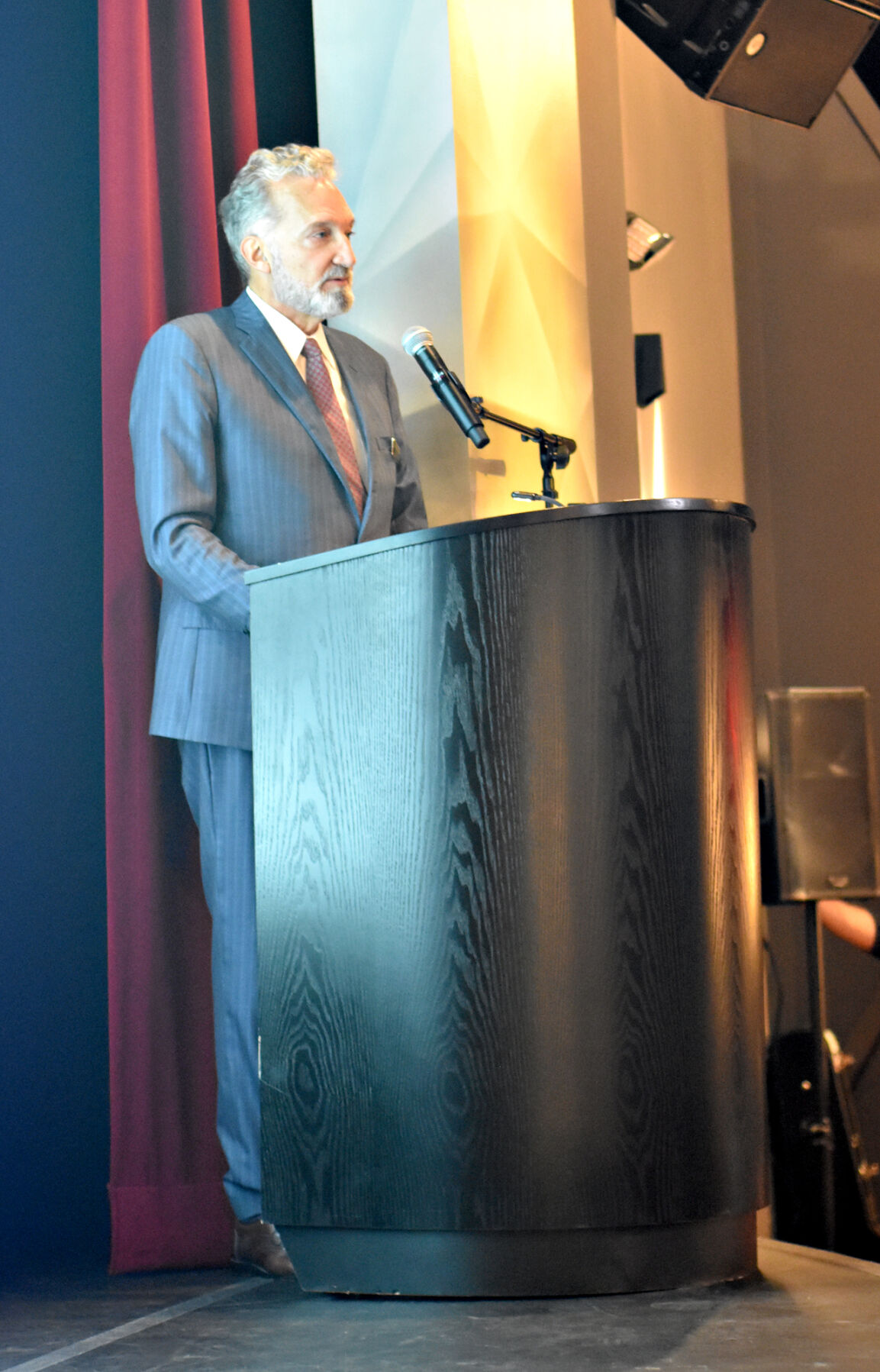 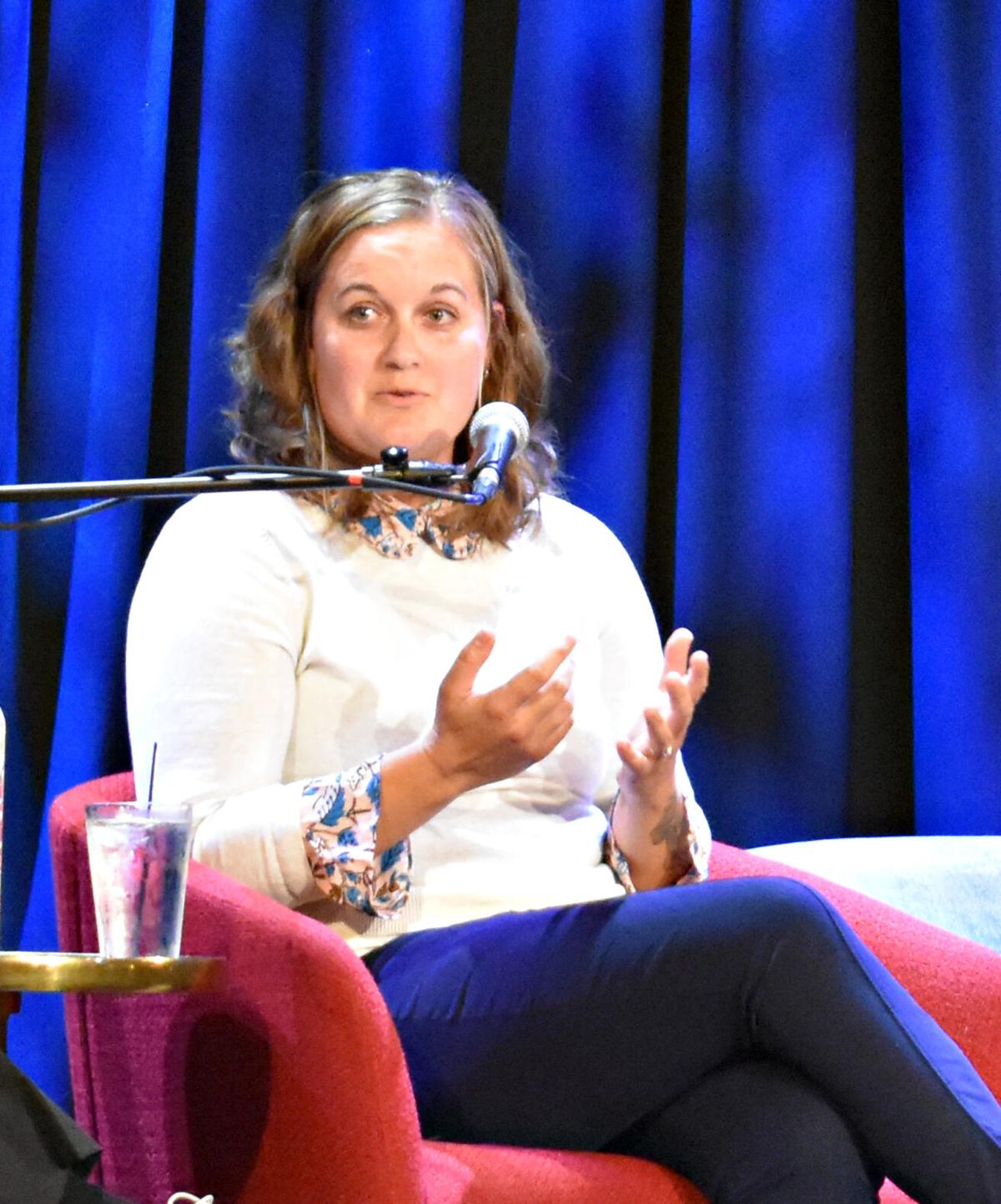 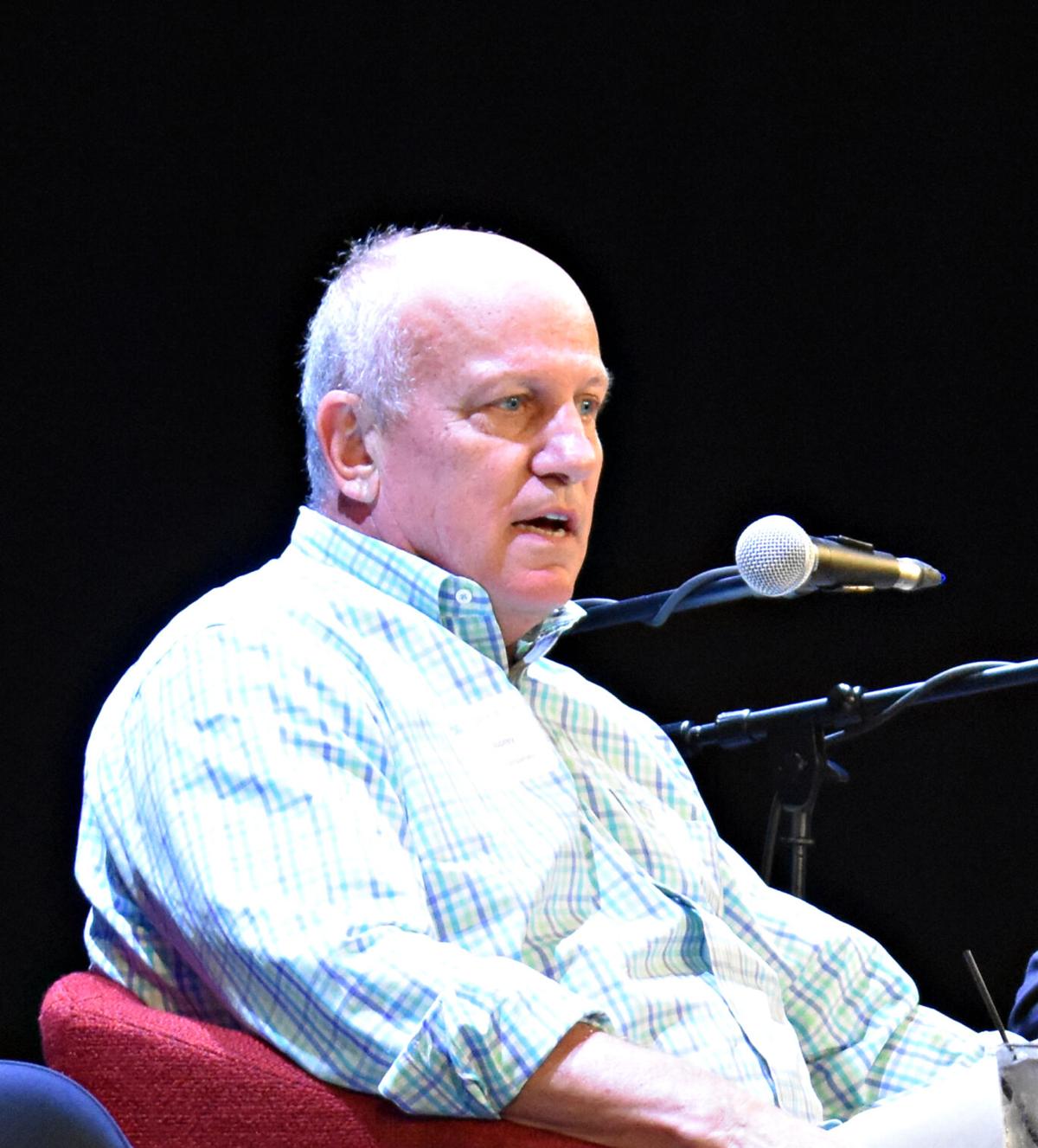 Steven Duprey, a developer who helped change Concord from a sleepy downtown to a thriving Main Street, said it took partnership with the city and many hours-long meetings with community members. (Adam Drapcho photo/The Laconia Daily Sun) 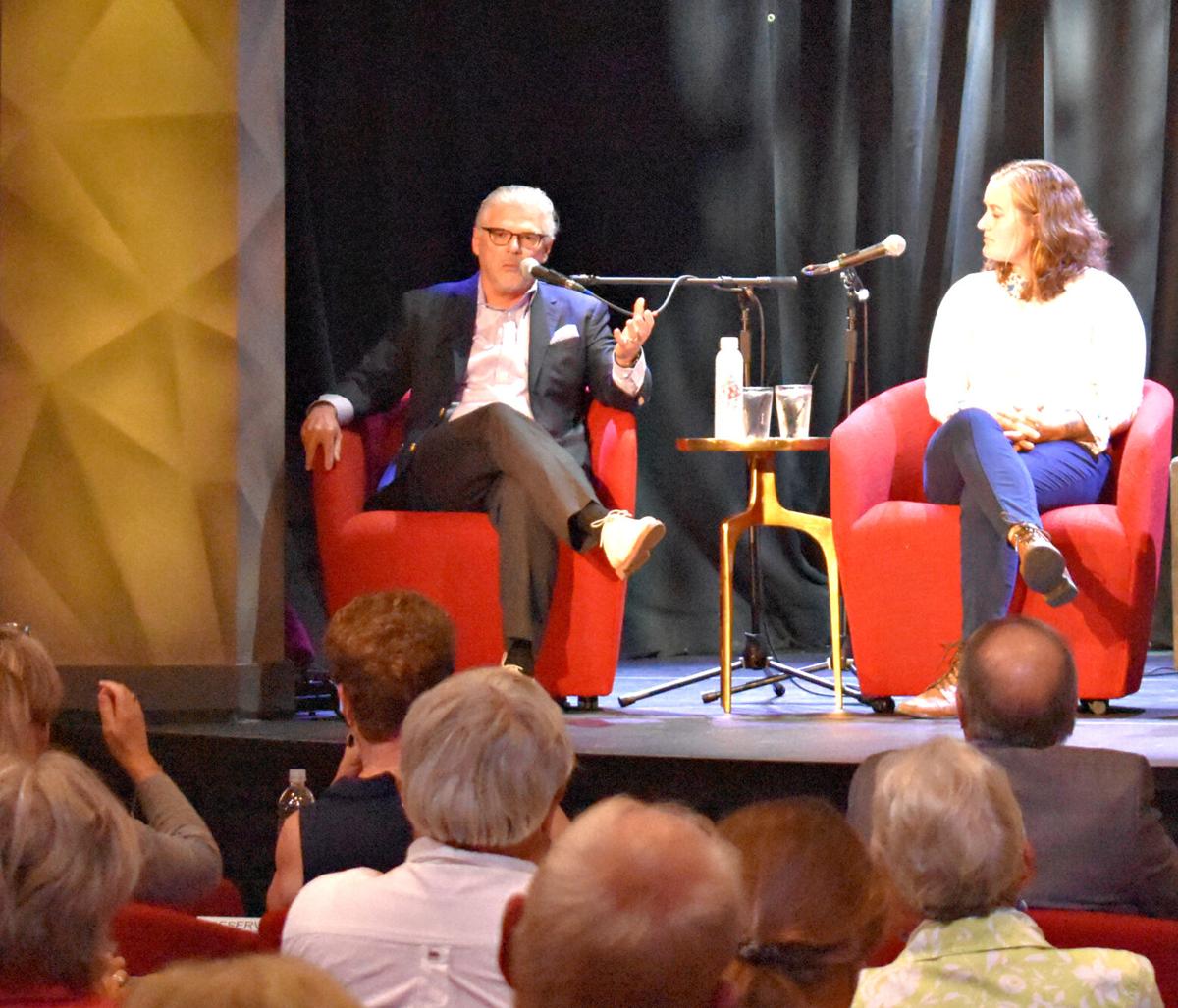 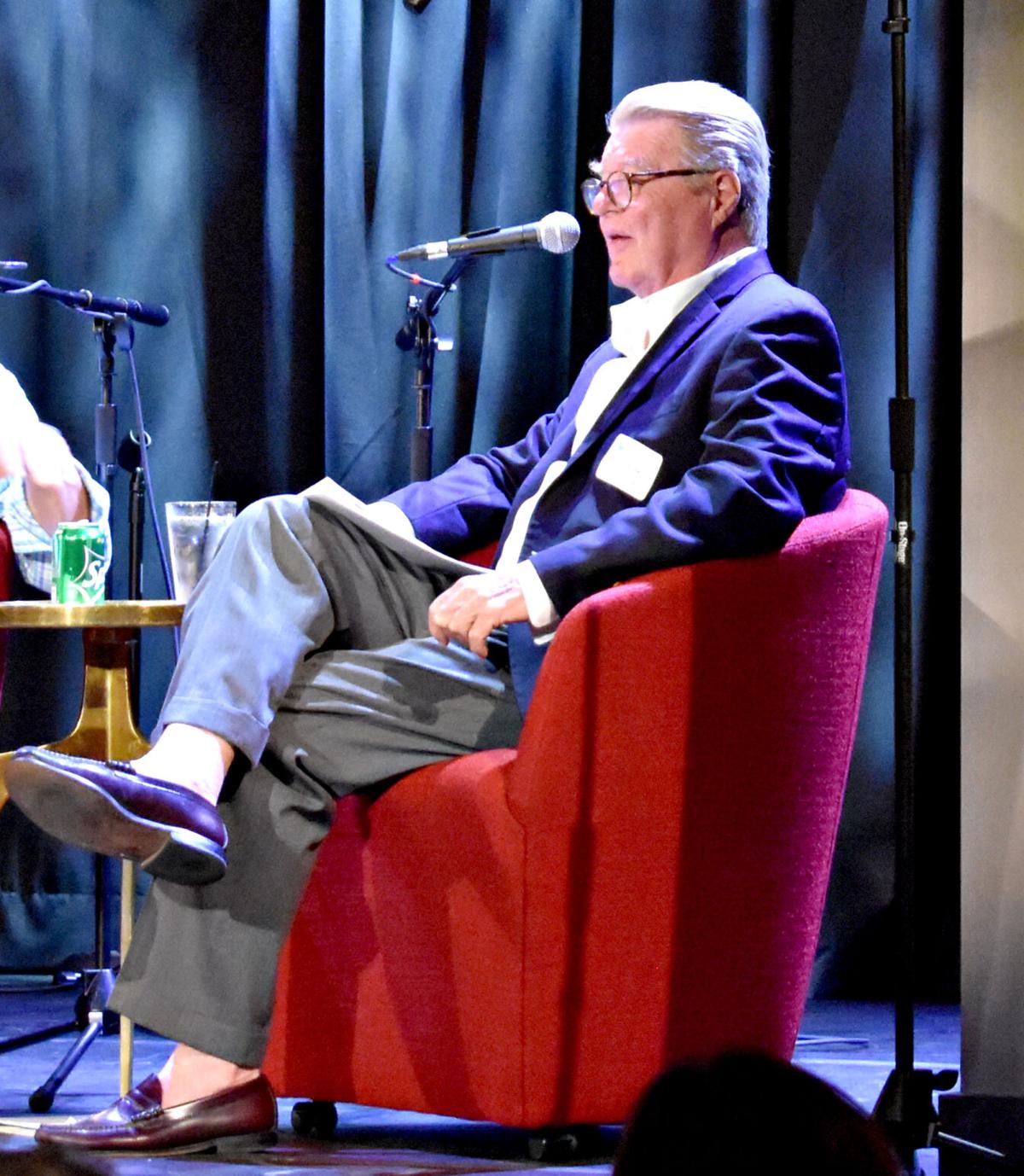 The first LAKEVIEWS forum focused on how to maintain and build upon Laconia's momentum of revitalization. (Adam Drapcho photo/The Laconia Daily Sun)

Steven Duprey, a developer who helped change Concord from a sleepy downtown to a thriving Main Street, said it took partnership with the city and many hours-long meetings with community members. (Adam Drapcho photo/The Laconia Daily Sun)

LACONIA — LAKEVIEWS, the first forum in a series on how to revitalize downtown Laconia, drew roughly 150 people from the Lakes Region and 25 viewers online for a community conversation Tuesday on what works and what doesn’t when it comes to making the city's economic revival last.

The goal now is to capitalize on the spark provided by regional arts venues, the restored Colonial Theatre and Lakeport Opera House, and make downtown a destination for locals, tourists and culture buffs – as well as for an expanded workforce that will want to live here.

Cementing downtown's success boils down to mustering and spreading interest and support, the panelists said. That includes securing backing from the city and private investors, offering tax and other incentives to businesses that open here, and creating a lifestyle-friendly landscape that offers quality, moderately-priced housing, enticing storefronts, sidewalk lighting and dining, and ample, walkable parking, plus restaurants and shops that stay open nights and on weekends, according to the panel members.

Laconia’s advantages, in addition to being a commercial hub in a four-season recreation area, include a municipal airport and a community college as well as a nexus of new arts venues with a wide appeal.

“We have a foundation in this city that is remarkably strong and resilient and serves as a launching pad to have a robust city. We have an opportunity to build the community we want,” Hosmer said. He added that policies and responsiveness from city government can expedite that, serving as “a tailwind that supports business people” and keeps the momentum going.

Rusty McLear, who redeveloped Meredith into a tourist destination in the 1980s, said team building and community support helped to overcome obstacles and skeptics who doubted that wholesale transformation was even possible. “There were very few people who were interested and thought it could be successful. What we started to do is make sure we had as many people on board as possible,” said McLear.

McLear started by creating a marketplace that included men’s and women’s clothing stores, a restaurant and bar, and an art gallery. “After a little while some dropped out. But in the beginning something that was new and different brought in a lot of people,” said McLear. Building and expanding hotels also made a big difference. Adding 22 rooms to the first 55 hotel rooms, increased occupancy by 15% the first year, and by 35% the second, he said.

Stephen Duprey, who spearheaded the renaissance of downtown Concord, assisting the Capitol Arts Center project and developing retail and office space across the street, and most recently, the Bank of New Hampshire Stage, remembers a dreary state capital that looked frozen in the 1950s, with narrow sidewalks, businesses that closed at 5, and downtown traffic that was dangerous for pedestrians crossing Main Street.

In addition to bringing city leaders on board, Duprey held eight to 10 stakeholder committee meetings, then conducted 29 three to four-hour meetings for community members on topics ranging from trees and traffic to parking.

“We let the public speak. They reached a consensus on what downtown could look like and they bought into what that could do,” said Duprey. Growth increases goods and services without increasing taxes, he said. “It took 14 months to build Main Street. It took three years to apply for grants and decide what we could do.”

“Just build consensus with people who are willing to be talked to,” said McLear, recalling his experience in Meredith. “Don’t ever lecture to them.” When he couldn’t find a contractor to perform a parking study, McLear did one himself, photographing lots around town at different times of day.

Karen Basset, who, with her husband Reuben Bassett, has opened or purchased four restaurants in downtown Laconia and Lakeport, said their experience makes her positive about local consumer staying power, and the arts only expand that. “This town just keeps showing up. Whether we have the arts or not, this town shows up for good business and good products” and the arts venues are poised to pull more consumers in.

Bassett, a Seattle native and former kindergarten teacher, said she opened Wayfarer Coffee Roasters in 2015 to create a community meeting place “where respectful conversations can happen.” Downtown foot traffic has since taken off, with a critical mass of destination stores. “We’re now bringing 300 to 500 people a day to Main Street,” said Bassett. “I see them taking their Wayfarer coffee and shopping around.”

“They created a product, but also an atmosphere that people are drawn to,” Hosmer said of Wayfarer and a second location in Lakeport. The obligation of elected officials and city staff is to listen, and support the efforts of new business, including through tax breaks and tax districts that favor more business development. Hosmer advocates public-private partnerships. “These are our community makers, and we want to help them,” he said

Now, downtown needs more restaurants, especially sit-down eateries that serve dinner and are open at night. What spurs this are landlords who are willing to give tenants four months rent-free while they build out their location in preparation to open, said Bassett. “We’re appreciative of building owners who are willing to let us get our feet under us and start to make money,” she said.

Laconia has day-time coffee shops that serve plenty, but not bistros that stay open at night – which extends visitor traffic and prolongs downtown life, said John Bethell, co-owner of Piedmont Print and Frame on Canal Street, who attended the event. “Shopkeepers keep downtown going,” said Bethell. “But Saturday after 3 or 5, we roll up the sidewalks. If we can manage three barber shops in two blocks, we can find a way to do that.”

Parking is a perennial issue that crops up in towns and cities throughout New Hampshire, said panel moderator Seymour.

McLear said the city of Claremont helped McLear and restaurateur Alex Ray construct a hotel in Claremont mill building by creating a parking garage, sewer and sidewalks that served it.

Duprey said there’s a lingering misperception about whether parking is required directly in front of stores. Concord’s Main Street traffic and sidewalk reconfiguration sacrificed some parking spots – a prospect that scares store owners. “It was really changing a mindset. People will easily trade convenience of parking for activity and excitement,” he said, pointing to the success of downtown Portsmouth, which doesn’t have much on-street parking in the retail district. “Even the biggest cynics will say the old idea that you need to have parking in front of a store is gone.” What’s needed are multiple shops, attractions and restaurants that add up to a walkable, stimulating experience, a place where you can spend a day and an evening.

A future goal that will require concensus-building is the extension of the WOW trail to Weirs Beach and Meredith, said McLear. “You get older people who want to get exercise, and young kids on their bikes. We in Meredith will do damn near anything we can to try and be part of it,” he said.

Duprey cites the popularity of the bike trail from Boscawen to Lebanon, which attracts cyclists to Concord, which has roughly 100 miles of walking trails within the city limits, Duprey said. He said there is ample federal funding available now for infrastructure projects, including rail trails. “I’ll bet you can get grants for 50 percent of the cost of it,” Duprey said.

A recording of the forum can be viewed at http://suneventsnh.com/

With the cost of food higher this year than others, what's something you'll include on your Thanksgiving table no matter the price?