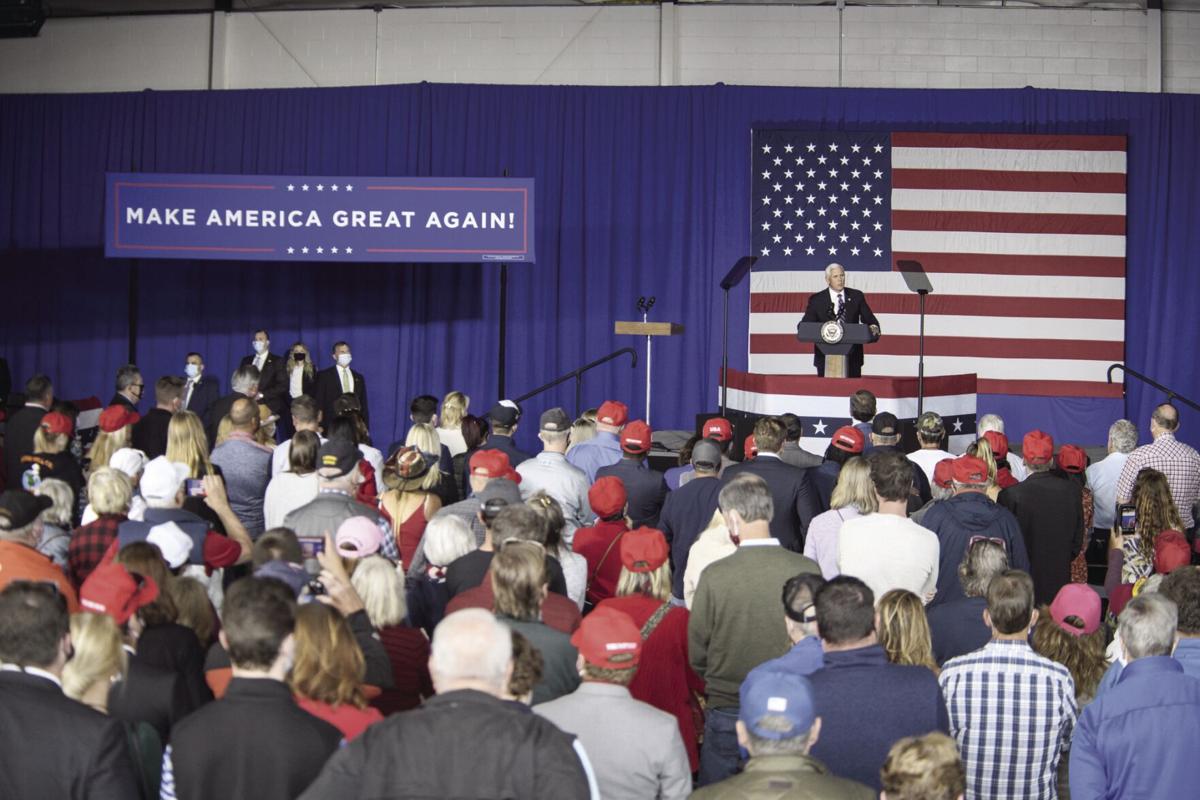 Vice President Mike Pence speaks to a capacity crowd at a campaign stop at the AutoServ hanger at the Laconia Airport on Tuesday. (Alan MacRae photo/for The Laconia Daily Sun) 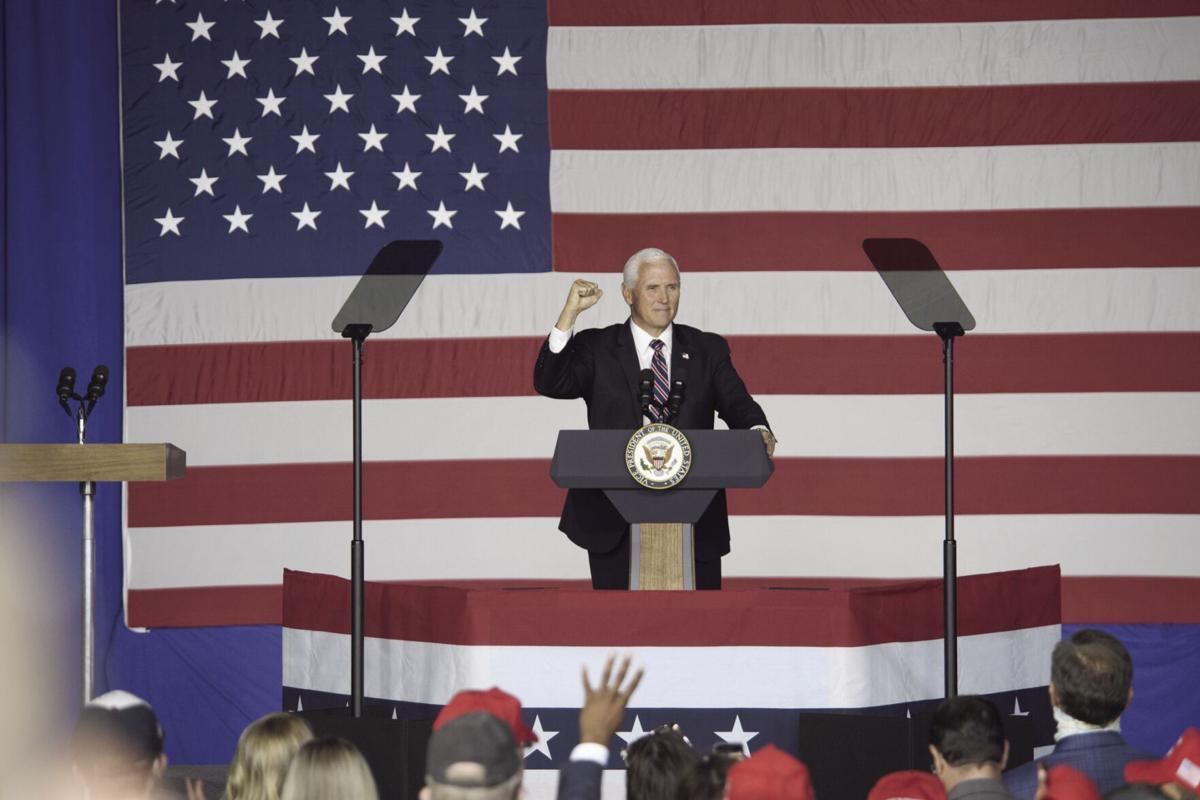 Vice President Mike Pence gestures during a campaign stop at the AutoServ hanger at the Laconia Airport on Tuesday. (Alan MacRae photo/for The Laconia Daily Sun)

Vice President Mike Pence speaks to a capacity crowd at a campaign stop at the AutoServ hanger at the Laconia Airport on Tuesday. (Alan MacRae photo/for The Laconia Daily Sun)

Vice President Mike Pence gestures during a campaign stop at the AutoServ hanger at the Laconia Airport on Tuesday. (Alan MacRae photo/for The Laconia Daily Sun)

GILFORD — On the day the U.S. coronavirus death toll hit 200,000, Vice President Mike Pence pronounced Donald Trump's presidency a success and asked a crowd at a Laconia Municipal Airport hangar to grant him and his boss four more years.

“A movement that began in this state has continued, brought our country to all new heights and brought us through challenging times," Pence told a crowd estimated by organizers at 500.

Trump carried the state in the 2016 presidential primary, but Hillary Clinton took New Hampshire in the general election.

Pence said Trump has boosted the economy, built the military, improved trade policy, cut taxes and red tape, has been strongly anti-abortion, appointed 200 conservative judges to the bench and will soon appoint a replacement for the late Supreme Court Justice Ruth Bader Ginsburg.

He said there have been 29 vacancies on the Supreme Court during an election year in U.S. history and presidents have always nominated a replacement.

On March 16, 2016, Obama nominated Merrick Garland to the Supreme Court, but Republican leaders in the Senate never gave him a hearing.

“The truth is Joe Biden would double down on the policies that have led to violence,” Pence said.

Biden for President Deputy Campaign Manager and Communications Director Kate Bedingfield released a statement: “For four years, the Trump-Pence administration has failed Granite State workers and families. They failed to protect Americans from the COVID-19 crisis, and as a result, 438 Granite Staters have lost their lives and more than 65,000 are out of work. To make matters worse, the Trump Administration is trying to invalidate the Affordable Care Act, which would rip away critical protections from as many as 572,000 Granite Staters living with preexisting conditions. A campaign rally isn't going to reverse the damage wrought by this administration or make New Hampshire voters forget that for nearly four years, President Trump and Vice President Pence’s failed leadership has left Granite State workers and families behind.”

Pence acknowledged the grim death toll and said he feels for the families of those lost.

He said that Trump did well by shutting borders and that this ultimately saved lives.

The crowd to watch Pence included Joe Juliano, 70, of Gilford, and his wife of 48 years, Sue.

“He has values. He has American values, Christian values.”

After the speech, Bonnie Burke of Laconia said she liked what she heard.

“It was awesome,” she said. “I love Vice President Pence. He’s a God-fearing man, he’s for law enforcement and the military. He wants to create jobs and turn America red again.”

Gov. Chris Sununu met Pence at the Manhester-Boston Regional Airport, boarding Air Force Two to talk to him and Admiral Brett Giroir about the pandemic.

Also present to greet Pence were congressional candidates Steve Negron and Matt Mowers and Senate candidate Bryant “Corky” Messner, who all joined Pence at the rally.

The Associated Press contributed to this report.

SANBORNTON — For the fifth time this summer, Jim and Wendy Mayotte have placed signs on their property proclaiming, “Trump, Pence, Keep Americ…