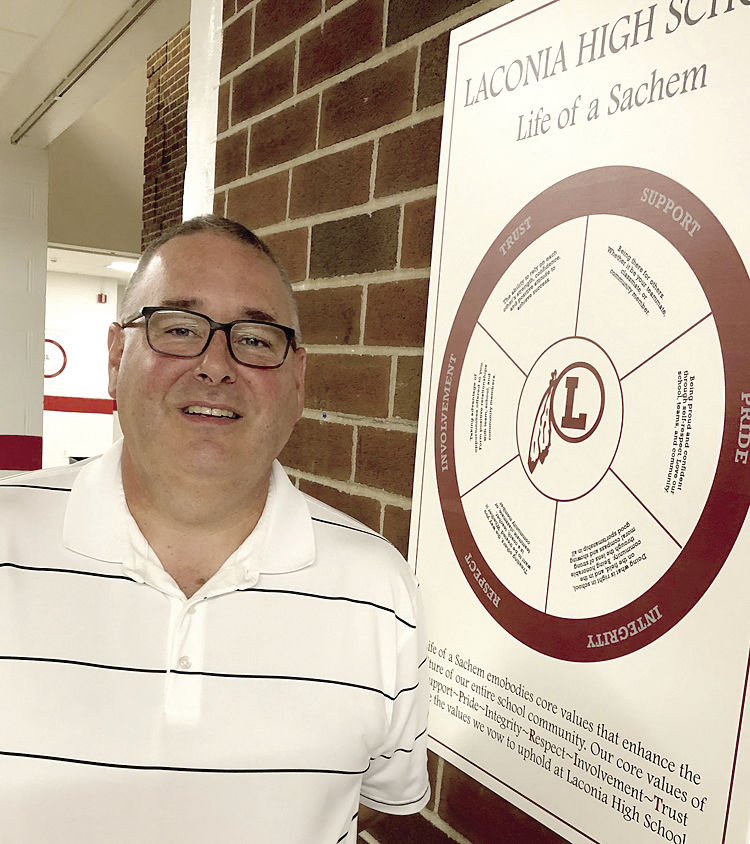 Robert Bennett, Laconia High School's new principal, stands next to a plaque that proclaims the school's core values. That statement of purpose is one of the things that attracted him to apply for the principal's job. (Michael Mortensen/The Laconia Daily Sun photo) 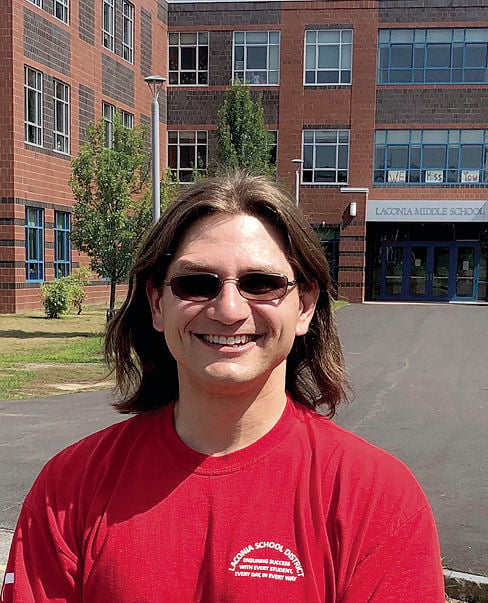 Chrigus Boezeman, the new assistant principal at Laconia Middle School, stands outside the school where he will also serve as the athletic director. (Michael Mortensen/The Laconia Daily Sun photo)

Robert Bennett, Laconia High School's new principal, stands next to a plaque that proclaims the school's core values. That statement of purpose is one of the things that attracted him to apply for the principal's job. (Michael Mortensen/The Laconia Daily Sun photo)

Chrigus Boezeman, the new assistant principal at Laconia Middle School, stands outside the school where he will also serve as the athletic director. (Michael Mortensen/The Laconia Daily Sun photo)

LACONIA — Robert Bennett, Laconia High School’s new principal, says the biggest lesson he has learned in his 25 years working in education is the importance of communication.

It’s a skill that he and other educators will need to display in the coming weeks and months as school leaders work to come up with a plan to safely reopen schools during the ongoing coronavirus pandemic.

“It’s like building a plane and flying it at the same time,” Bennett said as he sat in his office just one week after officially taking over the principal’s job.

“It’s not a situation educators are all that comfortable with,” Bennett said with a smile. “People think that, when it comes to running a school and educating children, we are supposed to be the ones with all the answers.”

Bennett and Boezeman have just assumed key positions in the two schools that account for almost half of the city’s approximately 2,000 public school students.

Bennett comes from Kearsarge Regional High School, which serves New London and six surrounding towns. He started working in the Kearsarge School District 25 years ago as a teaching aide. His first full-fledged teaching position was teaching social studies at Kearsarge High. He was also a coach. From the classroom he went on to become the school’s assistant principal and he became Kearsarge principal seven years ago.

“It was a chance to help have a global impact on the school,” Bennett said of his decision to shift from teaching to administration.

Bennett believes he had a positive impact on the students and the educational programs during his time at Kearsarge, but is quick to point out that he is a firm believer in a team approach to leadership.

The Kearsarge and Laconia districts are similar in terms of enrollment, both districtwide and at the high school. Kearsarge High’s enrollment is in the “low 500s,” Bennett said, while LHS’s enrollment is a bit higher — between 525 and 530, though it is expected to jump to more than 600 in the next couple of years, he pointed out. But the similarity ends there.

Kearsarge comprises seven towns with a combined population of approximately 14,000 — about 2,000 fewer people than live in Laconia alone. To underscore the district’s sprawl, Bennett noted that its school buses rack up a total of about 2,400 miles every school day — the equivalent of traveling from Laconia to Salt Lake City, he said.

Laconia also faces more economic challenges. While 19 percent of Kearsarge students qualify for free and reduced lunch, 52 percent of Laconia’s students are eligible for that assistance.

But Bennett, who grew up in East Andover, stressed that the Laconia school system has a certain character that he finds appealing, almost irresistible.

When he interviewed for the LHS principalship he acknowledged that he was asked, “Why do you want to come here?”

As soon as he knew that the district would be conducting a wide-open search to replace departing principal Michael Fredericksen he applied. It was the only job he applied for, he said.

“Even with the difficulties that this school district may have faced over the years, no matter who I talked to I met people who told me there was a toughness and a grittiness,” and it was that resilience and determination that attracted him. “Even in tough times this school district is the lifeblood of the community, and the school spirit is unmatched.”

Bennett said there are signs of that wherever he turns in the expansive LHS campus. Along one of the main corridors are trophies that speak to the school’s athletic achievements. But equally important and inspiring is a plaque that proclaims the school’s core values of support, pride, integrity, involvement, respect and trust.

Boezeman comes to Laconia Middle School after having served as a middle school assistant principal in Concord.

His foray into working with kids occurred when he became a middle school wrestling coach while he was still in college.

“That’s where the education bug bit me,” Boezeman said.

After working for a phone company and part-time in his dad’s print shop, he took a position as an assistant dean of students at Concord High School. The responsibilities of that position included dealing with students with discipline problems.

“You get to work with all kinds of kids,” he said of that job.

Later he taught social studies, and also coached wrestling and football. But when he moved over to become a middle school assistant principal he had to give up his involvement in athletics, something he sorely missed. So when he heard that Laconia Middle School was looking for an assistant principal/athletic director, he jumped at the opportunity.

“I, too, was told about Laconia’s community spirit,” he said.

What students do after school can often be as important to their development as what they learn in the classroom, Boezemen said.

Helping formulate a comprehensive plan to get kids back into school will be a major priority for the two men in the weeks to come.

COVID-19 has made every experience new, including education, Bennett said.

“We may be restructuring what education looks like, and at the same time as we try to bring calm to the community,” he said. “That’s not easy,” he admitted. “It’s hard to put everyone’s mind at ease. But we’ll get there.”

“You can’t listen too much. You can’t communicate too much,” he said.

LACONIA — A local man with a background in business management and youth development has been chosen to lead the area’s only Catholic school.