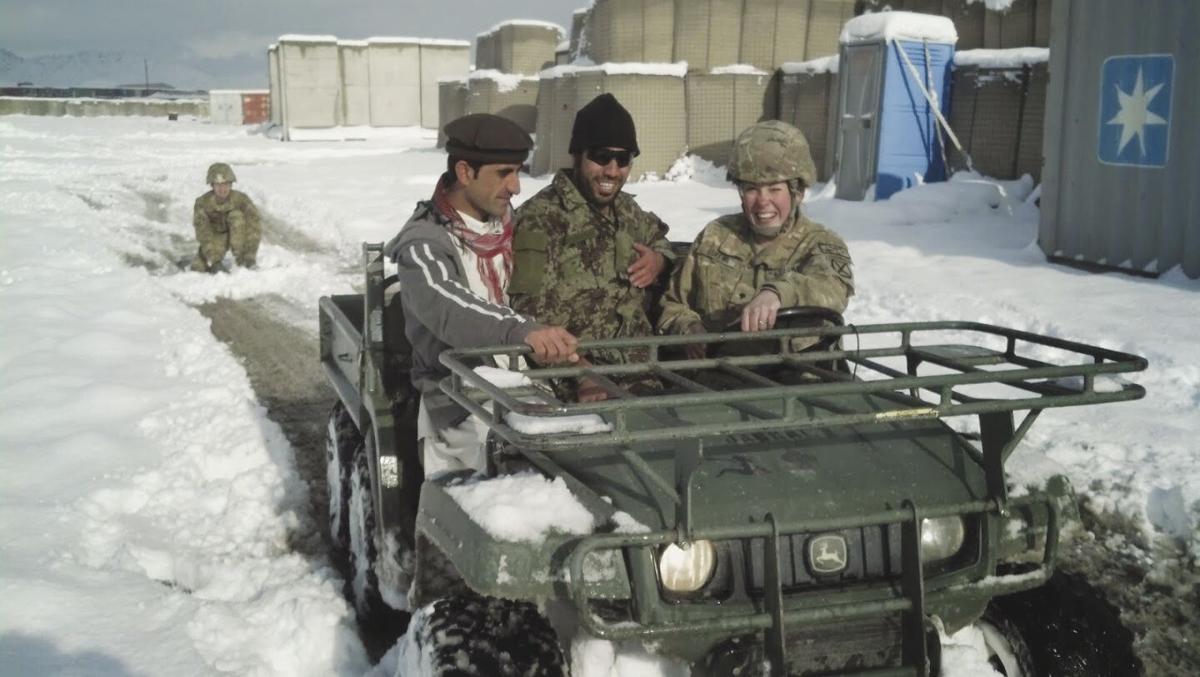 Specialist Eskew drives a four-wheeler as Kris Webber and their Afghan counterparts and interpreter sled around the helicopter landing zone at a forward operating base in Afghanistan. (Courtesy photo) 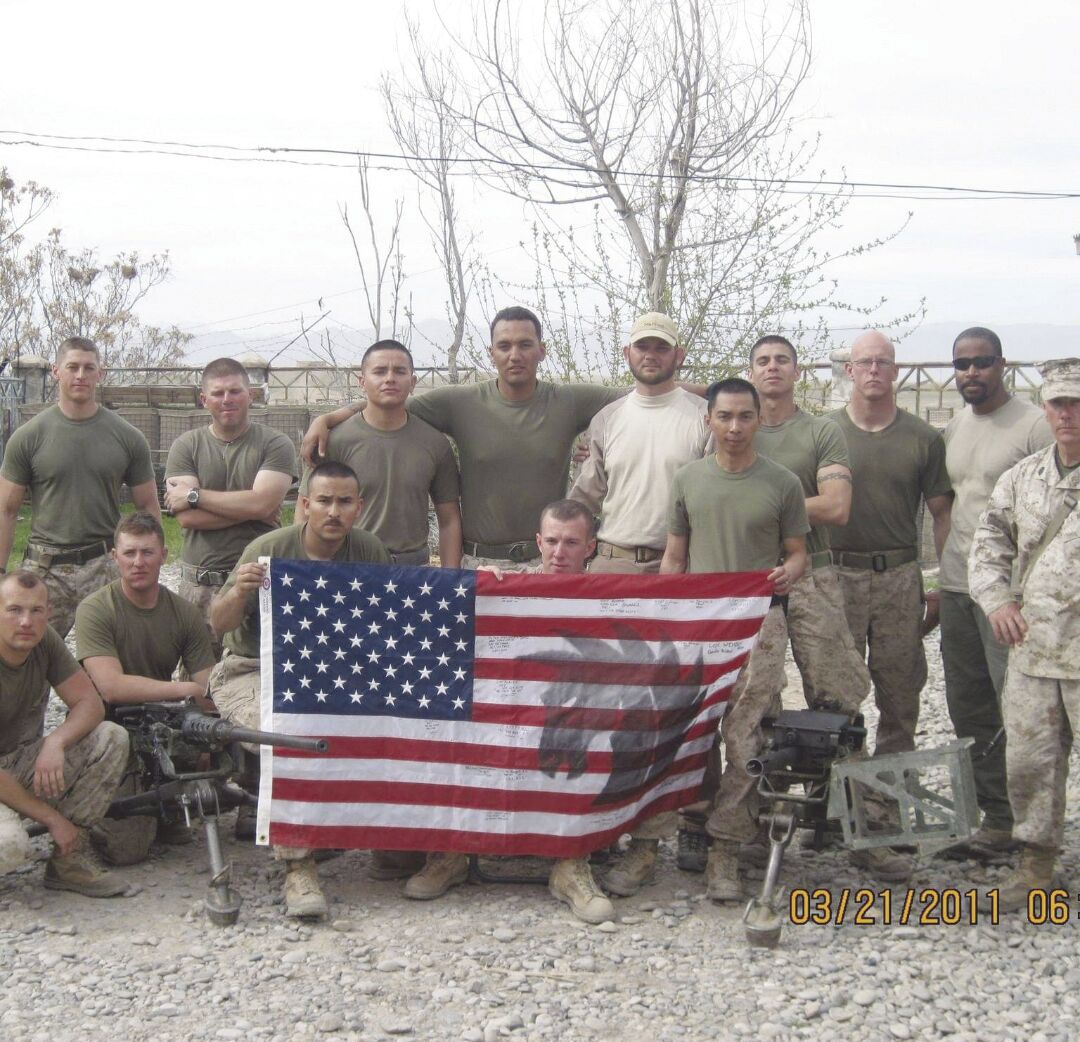 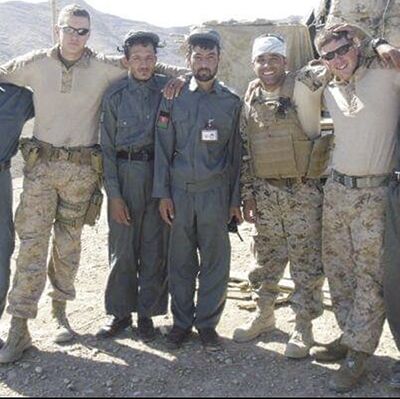 Aaron Anderson, far right, poses with members of the Afghan police with whom he trained and patrolled at center, an interpreter second from right, and Corporal Gallagher Road at left. (Courtesy photo) 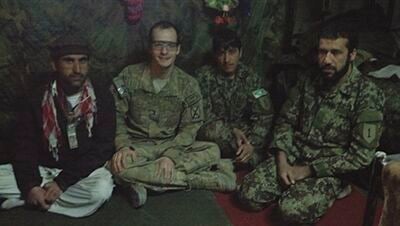 Kris Webber works on his mission of forging relationships with the Afghan Security Forces by sharing chai. (Courtesy photo) 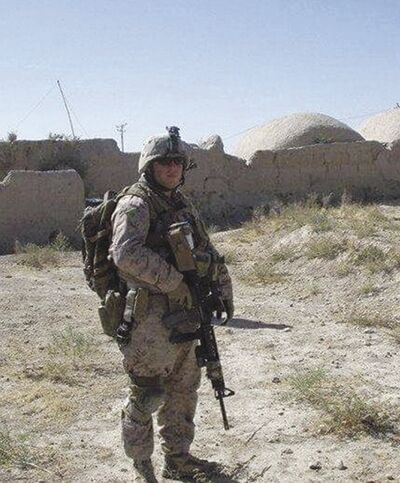 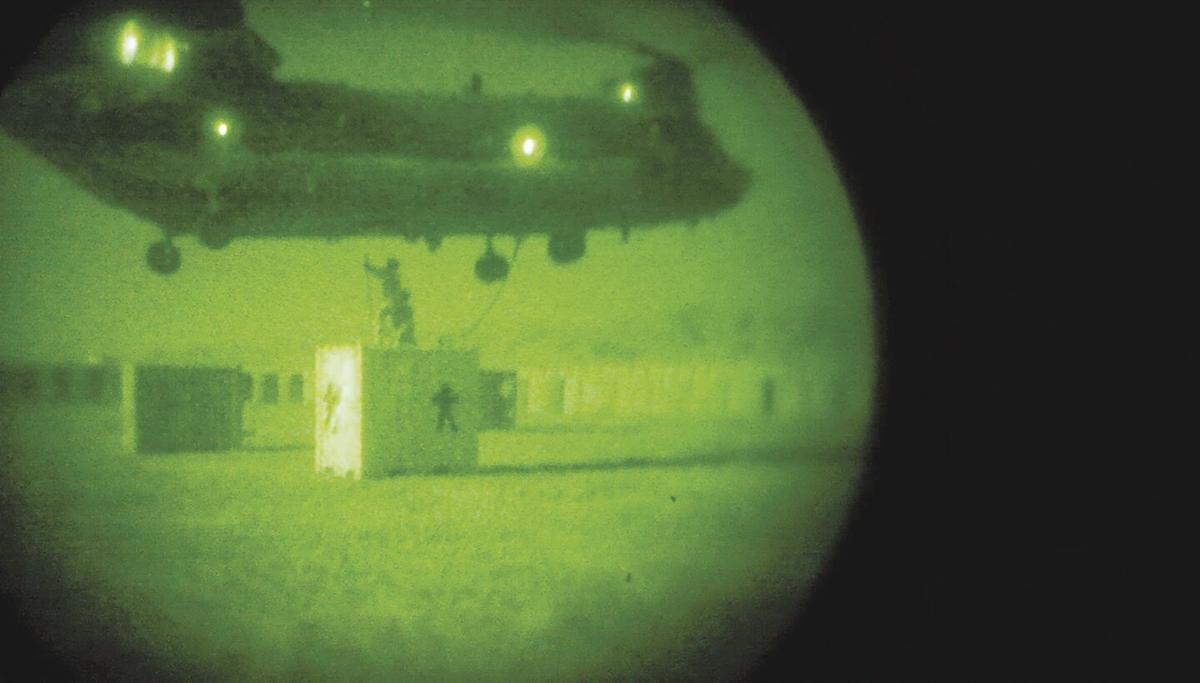 Soldiers hook up a container of U.S. equipment for retrograde from a foward operating base in Afghanistan. (Courtesy photo) 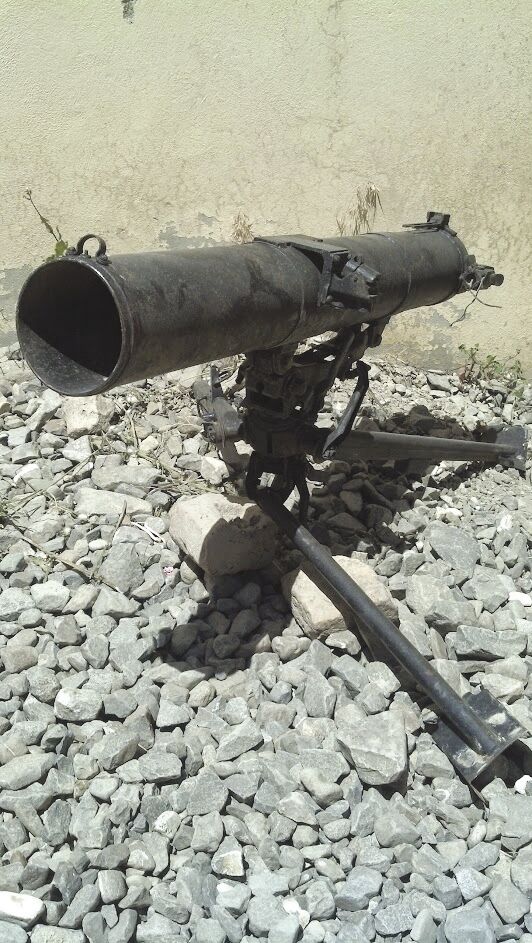 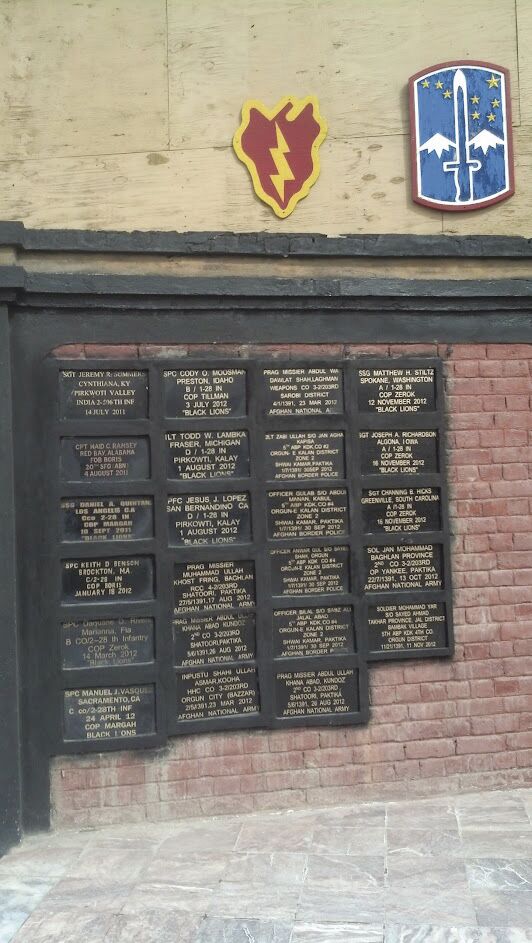 The memorial wall for the fallen soldiers in the Orgun-E AO. (Courtesy photo)

Specialist Eskew drives a four-wheeler as Kris Webber and their Afghan counterparts and interpreter sled around the helicopter landing zone at a forward operating base in Afghanistan. (Courtesy photo)

Aaron Anderson, far right, poses with members of the Afghan police with whom he trained and patrolled at center, an interpreter second from right, and Corporal Gallagher Road at left. (Courtesy photo)

Kris Webber works on his mission of forging relationships with the Afghan Security Forces by sharing chai. (Courtesy photo)

Soldiers hook up a container of U.S. equipment for retrograde from a foward operating base in Afghanistan. (Courtesy photo)

The memorial wall for the fallen soldiers in the Orgun-E AO. (Courtesy photo)

For many, the words “September 11th” provoke images of planes and towers. For some, that date brings to mind faces, and months spent on the far side of the world.

The anniversary of the terror attacks of Sept. 11, 2001, is a personal and often troubling date for veterans who served in Afghanistan. This year’s commemoration is all the more traumatizing. The Taliban, who harbored the organization that carried out the murder of more than 2,000 Americans, are once again in control of the country despite 20 years of effort and blood by U.S. service men and women.

Aaron Anderson, who lives in Farmington, is now a 33-year-old father of three. He was 14 on Sept. 11, 2001, and the terrorist attacks shook his world. “My best friend’s father was a pilot of Flight 11,” the first plane taken over by al-Qaeda terrorists and flown into the World Trade Center’s north tower. “It hit me really hard,” Anderson said. “That’s what really pushed me over the edge to join when I graduated high school.”

Anderson wanted to hit back against Afghanistan, but the U.S. Marine Corps had different plans for him. He served from 2006 to 2011, first as a military police officer in Iraq. He volunteered for an additional tour, from Aug. 2010 to April 2011, because it meant that he would be able to serve in Afghanistan.

“My job there was to train the Afghan police,” said Anderson. He was deployed with Marines serving in the Helmand Province, thought to be one of the country’s most dangerous areas. “We lost 25 Marines, had over 200 wounded in that deployment. Trying to keep these guys’ memories alive is what I’m trying to do,” Anderson said.

While Anderson said he was ambivalent about the country’s involvement in Iraq, he said he was “one hundred percent” certain that military operations in Afghanistan were justified. One of the things that troubles him today, though, are how those operations were carried out.

“I got to know my interpreters, I slept and fought with Afghan police,” Anderson said. He and his fellow Marines earned the trust of a local population that was distrustful by nature, he said, to the point where civilians would tell the Americans where improvised explosives had been placed. “That was huge. They didn’t have to do that,” Anderson said.

He feels that trust was betrayed when the U.S. started scaling back its military involvement, which left the door open for the Taliban, he said.

“If we had kept going for another five years, the Taliban would have been done. The problem was we kept changing the rules, moving the goal lines, and the next thing you knew it, we were pulling out and the Afghan people felt they were being abandoned. And I don’t blame them,” Anderson said. His view of the management of the war went from bad to worse in August, when instead of an organized withdrawal of personnel from the country, he saw a harried evacuation that he called “a complete debacle.”

Returning to civilian life has been difficult for Anderson. He said he’s been going “from job to job, trying to figure out what fits me.” He has some financial support from the government, as his PTSD, anxiety and depression, as well as issues with his knees and his back, qualify him for disability. Yet, he’s quick to point out, “I’ve got brothers of mine that gave a lot more, whether it’s their leg, or their life.”

Asked about his service, Anderson said, “I wouldn’t trade it for the world,” though he also expressed frustration about what his sacrifices brought.

“I’m emotionally and physically hurting, and for what? We did what we were supposed to do. We kicked the Taliban out of where they were, we stood up schools, we stood up police,” Anderson said. “We made it a pretty safe place, and for what?”

Kris Webber, also 33, said he is unusual among military veterans of his age in the Sept. 11 attacks didn’t cause him to join the military. He said he always knew he would join the armed services, and watching the events of that day only gave him insight into what his service would be like.

“Probably like everyone else, I vividly remember. I was in Gilford Middle School, we got pulled into a classroom to watch the news. Even then, I knew I was going into the Army,” Webber said. “I knew I was going to be part of whatever was starting. Who knew in 2001 that we would still be going there in 2013?”

Webber went to West Point, and served in the U.S. Army until 2019. He went to Afghanistan as a lieutenant, and said he didn’t really know what to expect.

“It was my first deployment,” Webber said. “Having significant responsibility, especially for my age, was daunting. You are the one that’s responsible for everything your unit does and fails to do, you are responsible for the lives of your soldiers.” He said he was filled with stress in the days leading up to his entry into the war zone, but that was replaced by another sense when he got to work.

“I think the general tone of our time was, I hate to say it, futility,” Webber said. He and his soldiers were trained as infantry, taught to conduct warfare on a field of battle. Instead, they were given a different mission, passing those skills on to the Afghan security forces — and they weren’t supplied with nearly enough people to do it, Webber said.

“Training a partner in an indigenous nation security force is just not our job description . . . We felt like amateurs trying to play at a professional job.” And if that wasn’t enough, “we were so undermanned,” Webber said. “We consistently felt that we just couldn’t get the job done, there were parts of the country that we just couldn’t put eyeballs on for a month or two at a time.”

Webber has a range of feelings about his service in Afghanistan. He has fondness for the people he served with, “We were family,” he said, yet they were put in a can’t-win situation. It left a pain that haunts.

“The thing that I think of whenever September 11th rolls around are the fellow soldiers I served with. A lot of them aren’t around anymore. The thing that sticks out are the ones that took their own lives, even years and years after deployment. One of my friends, just this year, went there,” Webber said.

He said he has felt that pain himself, especially since being discharged in 2019.

“It was a pretty rough transition,” said Webber, who is currently working in cyber security and living with his parents in Gilford while having a house built in town. “A lot of issues caught up with me. I guess there was never time to work through (them) when I was in the Army, because the next thing was always the most important thing.” He said the hardest part was trying to work through those issues while also being separated from the friends and unit members he had grown so close to.

What’s made it worse for Webber is the disconnect between the Americans who have deployed abroad in combat zones, and the rest, an overwhelming majority, for whom the war has been a distant, occasional thought.

“The general thing that I want to say to the rest of the people is that it didn’t affect your life. You have to acknowledge that you just straight up didn’t notice that we were at war for months at a time.” Webber said that it’s common to see messages to “Support Our Troops,” but wonders if the troops’ sacrifice is truly understood.

“As an amateur student of history, every generation has to learn that war is bad, war is hell, it’s not something we should ever do, under any circumstances . . . It’s a little disappointing that the tangible lesson probably won’t stick.”

A mental health professional with the Veterans Administration said that the end of combat operations in Afghanistan could result in “a range of challenging emotions” for veterans who served there. Veterans who served in other conflicts might be similarly affected if the media coverage reminds them of their own experiences.

“We want all veterans to know that they are not alone. Reach out. There are a wide range of resources available to help you find your path. Here at your Manchester VA, we have same day access to mental health services along with many other wellness services. Give us a call at 603-624-4366, ext. 3199 or come in and see us. If you or someone you know is in crisis, the Veterans Crisis Line is available 24/7/365 at 800-273-8255 and press 1 or text 838255. We challenge everyone to save the Veteran Crisis Line number in their phones as it could be the difference in saving a veteran’s life,” said Alicia Semiatin, chief of mental health at the Manchester Veterans Affairs Medical Center. “Finally, if you have a veteran in your life, reach out, let them know you care and take the time to listen.”