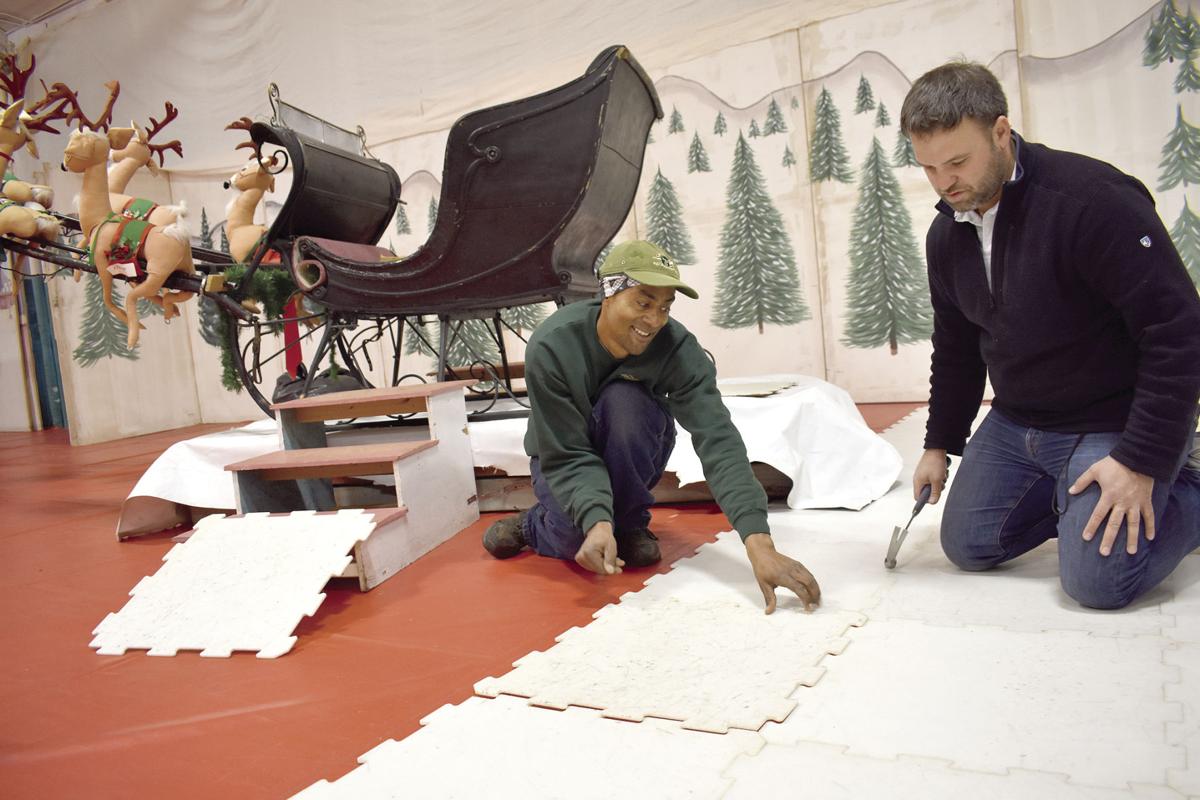 Jay Pitts, an employee with Laconia Parks and Recreation, fits a square of artificial ice for Matt Mansur to hammer into place. Mansur, assistant director for the city department, said Parks and Rec would be able to take responsibility for the set-up of Christmas Village if needed. 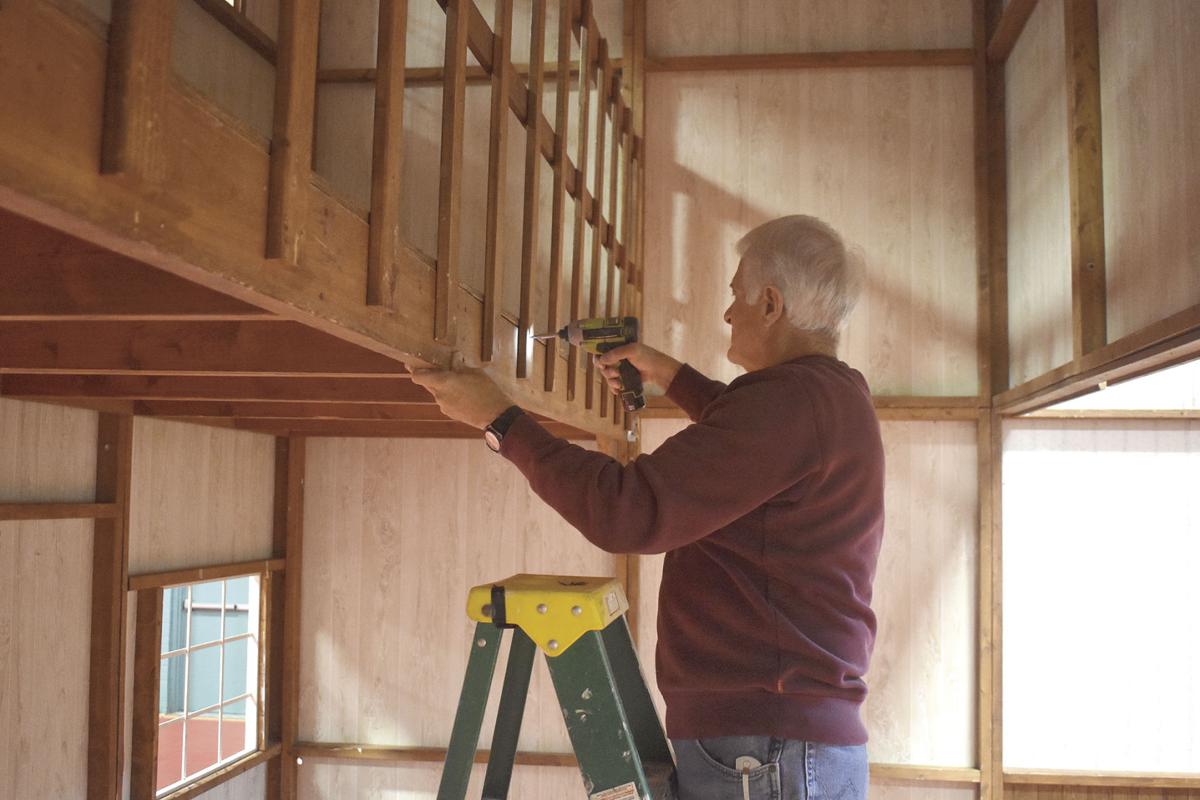 Bob Hamel, who has volunteered for more than 40 years to help put on Christmas Village at the Laconia Community Center, attaches a railing for the balcony in Santa's house. Hamel said it's time for a change in leadership for the annual holiday tradition. (Adam Drapcho/The Laconia Daily Sun photo)

Jay Pitts, an employee with Laconia Parks and Recreation, fits a square of artificial ice for Matt Mansur to hammer into place. Mansur, assistant director for the city department, said Parks and Rec would be able to take responsibility for the set-up of Christmas Village if needed.

Bob Hamel, who has volunteered for more than 40 years to help put on Christmas Village at the Laconia Community Center, attaches a railing for the balcony in Santa's house. Hamel said it's time for a change in leadership for the annual holiday tradition. (Adam Drapcho/The Laconia Daily Sun photo)

LACONIA — Skylor Miller said she never missed a chance to attend Christmas Village when she was growing up. The experience, she said, was “magical.”

“Walking into the village when they open those curtains is the coolest thing as a kid, the first thing you see is all the lights and Santa’s house,” Miller said. Children first enter into the Laconia Community Center’s basement for games and activities while they await their turn in the village. Once they’re welcomed inside, they stop for cookies and lemonade, ride on Santa’s sleigh, look at model trains, and build an ornament in the woodshop. “Your excitement builds as you go through the village and get closer to Santa’s house,” she said. Each child gets their own moment with Santa, and they all leave with a gift.

This will be the 44th year that Christmas Village is created within the Laconia Community Center. There’s no cost to attend, and the event has become a treasured holiday tradition for many families. That’s the case for Miller, who now joins the 60 or so volunteer “elves” who help the 1,500 visitors expected when the village is open this year, Dec. 5-8.

Christmas Village is at a kind of crossroads, though. For many years, the village was spearheaded by Bob Hamel and the Bolduc brothers, Ernie and Armand. Armand died last year, and Ernie is now in his 80s, leaving Bob, who has been part of every Christmas Village, with more than he can shoulder.

“We’ve tried to get folks to step up,” Hamel said. Help has come, but the new generation of leadership that he was hoping to pass the event to hasn’t materialized. That leaves Hamel with the conclusion that if Christmas Village is going to continue, it will have to do so as a city program. In fact, he said the village’s current survival is owed to city help.

“They’ve helped out for quite a few years. If we didn’t have Parks and Rec, it wouldn’t happen, because nobody shows up,” Hamel said. Hockey players from the Laconia Wolves team helped move the many components of the village from storage to the Community Center, but it’s a several-person, several-day job to assemble all the pieces to create the village.

“This is the pain part,” Hamel said, taking a break after screwing together the railing for the balcony in Santa’s house. “The fun part is when the kids come in.”

All kinds of children will visit the village, he said, including some for whom that will be their only Christmas.

Patty Derosier is Miller’s mother and one of the “elves” of the village. It’s her job to ensure that 800 dozen cookies have been baked for all the children. She said the conversation between the child and Santa can lead to startling revelations. One year, when Santa encouraged a boy to have good behavior, the child responded, “But I was good last year and you didn’t visit.” Further discussion with the parents revealed that they had lost everything in Hurricane Katrina and were using inflated pool toys for mattresses. Derosier said volunteers were able to connect the family with local businesses that helped provide furniture and bedding.

“We’re not just there to entertain everybody one weekend a year, we’re there to bring in the Christmas spirit, to help people in need,” she said. “We go above and beyond, we want these kids to leave there with a good memory.”

That’s the kind of experience that keeps Hamel coming back. “Another year, but I’ve got to admit, it’s wearing. It takes a lot of time to put up. And then you’ve got to put it down,” he said.

Matt Mansur is the Parks and Rec department’s new assistant director. He said the village “is an important contribution to our community,” and that he would be willing to take on the set-up and take-down of the village as a responsibility of his department.

“The more we can continue to get volunteer help, the better,” Mansur said. “And I’m excited about the possibility of getting a new generation of Laconia volunteers to come in and take a lot of pride in this.”

CANTERBURY — Canterbury Shaker Village is open through Sunday, Nov. 24, and will re-open for holiday events. Through Nov. 24, guided tours are…