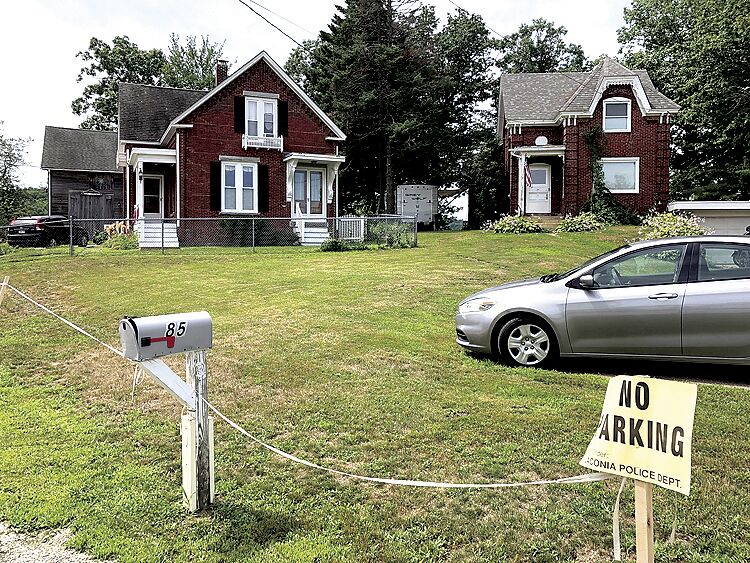 Temporary no-parking signs and tape line a section of Winnisquam Avenue after hordes of beachgoers thronged the usually quiet Bartlett Beach on Lake Winnisquam, with many parking their vehicles in the yards of nearby homes. (Michael Mortensen/Laconia Daily Sun) 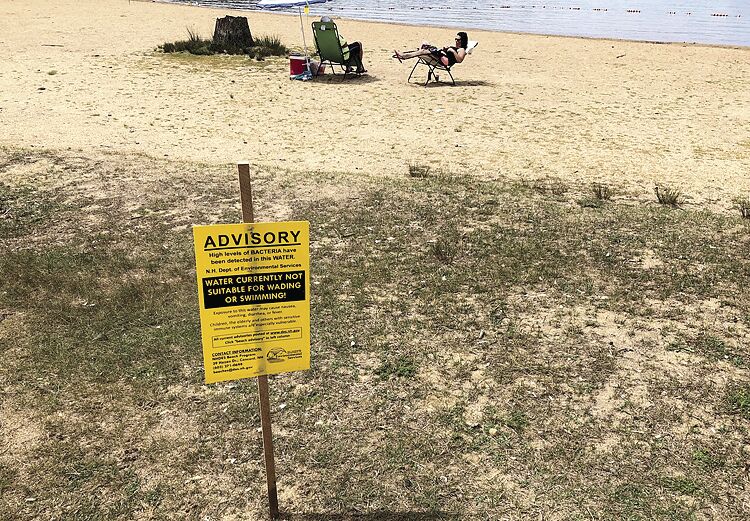 A couple has Bartlett Beach on Lakes Winnisquam in Laconia all to themselves Friday., while a sign warns beachgoers that the water at the beach is unsafe for swimming because of high bacteria levels. The beach has become much more popular on weekends this summer due to restrictions at other area beaches because of COVID-19. (Michael Mortensen/Laconia Daily Sun)

Temporary no-parking signs and tape line a section of Winnisquam Avenue after hordes of beachgoers thronged the usually quiet Bartlett Beach on Lake Winnisquam, with many parking their vehicles in the yards of nearby homes. (Michael Mortensen/Laconia Daily Sun)

A couple has Bartlett Beach on Lakes Winnisquam in Laconia all to themselves Friday., while a sign warns beachgoers that the water at the beach is unsafe for swimming because of high bacteria levels. The beach has become much more popular on weekends this summer due to restrictions at other area beaches because of COVID-19. (Michael Mortensen/Laconia Daily Sun)

LACONIA — Limitations on the capacity of Weirs Beach has caused other area beaches to become overcrowded, creating headaches for some residents, prompting complaints to public officials and triggering a decision to more than double the attendance cap at Weirs Beach.

The city’s Parks and Recreation Commission increased the maximum number people allowed on Weirs Beach from 400 to 1,000, city Parks and Facilities Director Amy Lovisek said, a move designed to take pressure off other beaches in the city, especially Bartlett Beach.

The Parks Commission imposed the 400-person limit on the 450-foot-long Weirs beach two months ago in an effort to enforce the social distance guidelines designed to reduce the spread of the coronavirus. The decision to increase the limit to 1,000 came Monday evening after about 15 members of the public turned out to voice their complaints at the commission’s meeting held in the Laconia Community Center gymnasium, Lovisek said.

Weirs Beach has a rated capacity of 2,200 people, and is the largest beach in the city.

Lovisek said raising the COVID capacity of Weirs Beach should relieve the pressure on Bartlett Beach, as well as the beaches at Opechee Park which have also seen especially large crowds on recent weekends.

The 400-person cap at Weirs Beach has been causing “a huge strain on our other beaches which have seen record numbers,” Lovisek said.

Ahern State Park beach, which like Bartlett Beach, is also on Lake Winnisquam, has also been overrun with visitors who were turned away from Weirs Beach. The unusually large weekend crowds swelled the beach and swimming area, and left behind bags of trash which local residents said were not collected for days.

At Bartlett Beach the scene has been even more chaotic every weekend this month.

The beach has a small dirt parking lot which quickly filled up, so later arrivals parked in the yards of businesses and private homes on Winnisquam Avenue. In addition, some people used the beach as a boat launch. And others who launched their craft elsewhere then beached their boats and jet skis next to the swimming area. Neighbors also complained that some at the beach were smoking in violation of city ordinance, and playing music so loud it could be heard blocks away.

On Friday, Lovisek said steps have been taken to correct the problems. The parking lot has been striped to delineate room for about 35 vehicles. Boulders have been placed between the parking area and the beach to prevent boat-launching. A beach caretaker will be assigned to Bartlett Beach on Saturdays and Sundays to inform people about the rules. The caretaker will also call police if necessary if they fail to comply.

Adding to the problems at Bartlett, water quality tests conducted last week found bacterial levels which make the water unsafe for swimming or wading. The beach has been posted. Lovisek said the high bacterial levels were due to waterfowl excrement and the higher than usual number of beachgoers. The water is due to be tested again early next week she said.

Both Lovisek and Police Chief Matt Canfield said a community resource officer will be stationed near the entrance to Bartlett Beach on Saturdays and Sundays and once the lot is full people will have to park at an approved parking lot elsewhere. In addition, the chief said an officer will patrol Bartlett and Bond beaches as well as Opechee Park.

The officer will also patrol Ahern State Park. Canfield said he was informed that the state was planning to reopen the access road to the Ahern Park Beach Friday and would place a large waste container at the beach for people to deposit their trash.

Lovisek said limits on the number of people allowed at Ellacoya State Beach in Gilford had further strained the city’s other beaches. She was unsure what the cap at Ellacoya was. Calls to the state’s park service for information were not returned Friday. But a check of the department website on Friday showed that Ellacoya was sold out for today, and that there were 14 spots available for Sunday.

LACONIA — Five years ago, Donald Gagnon was hanging out in Fort Lauderdale, Florida, when he saw a strange vessel float past. It looked like a…