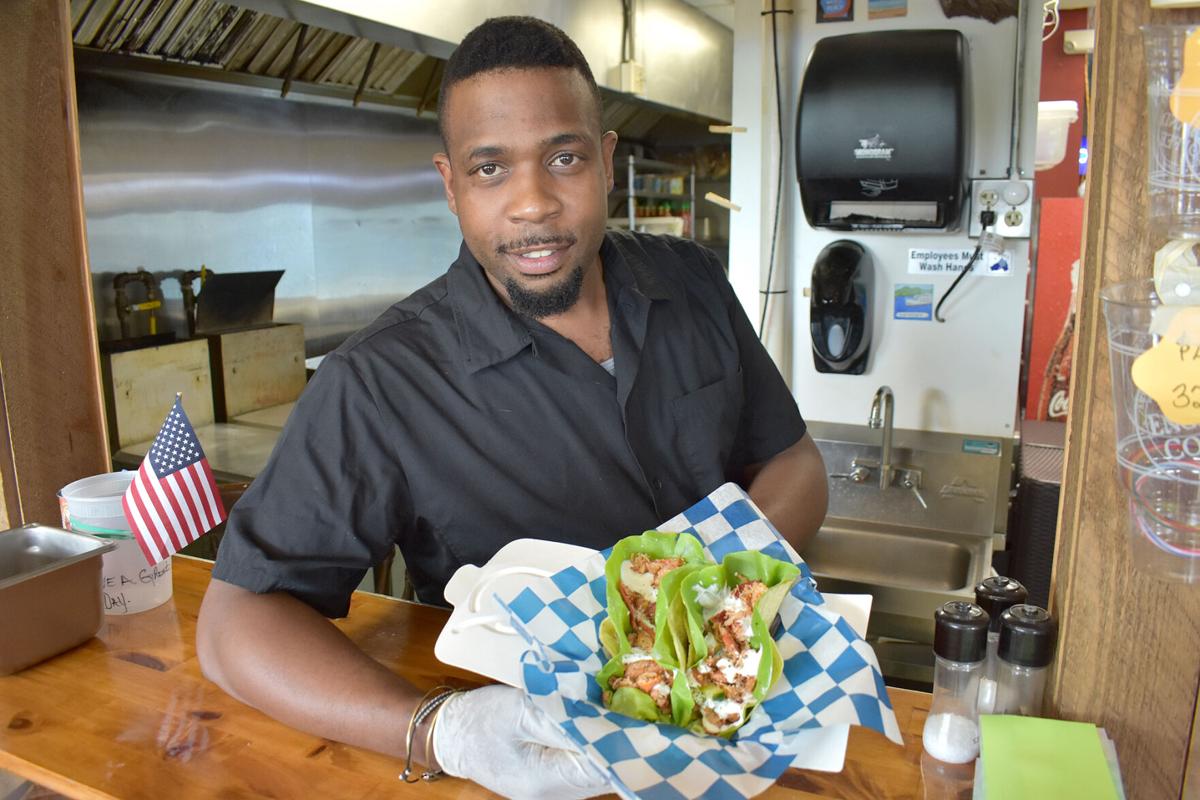 Hernerce Popo, head chef at Beach Taco on the Winnipesaukee Pier, has found that his blend of Mexican presentation and Haitian flavors has been a hit, such as with the Cajun lobster tacos he's holding here. (Adam Drapcho/The Laconia Daily Sun photo) 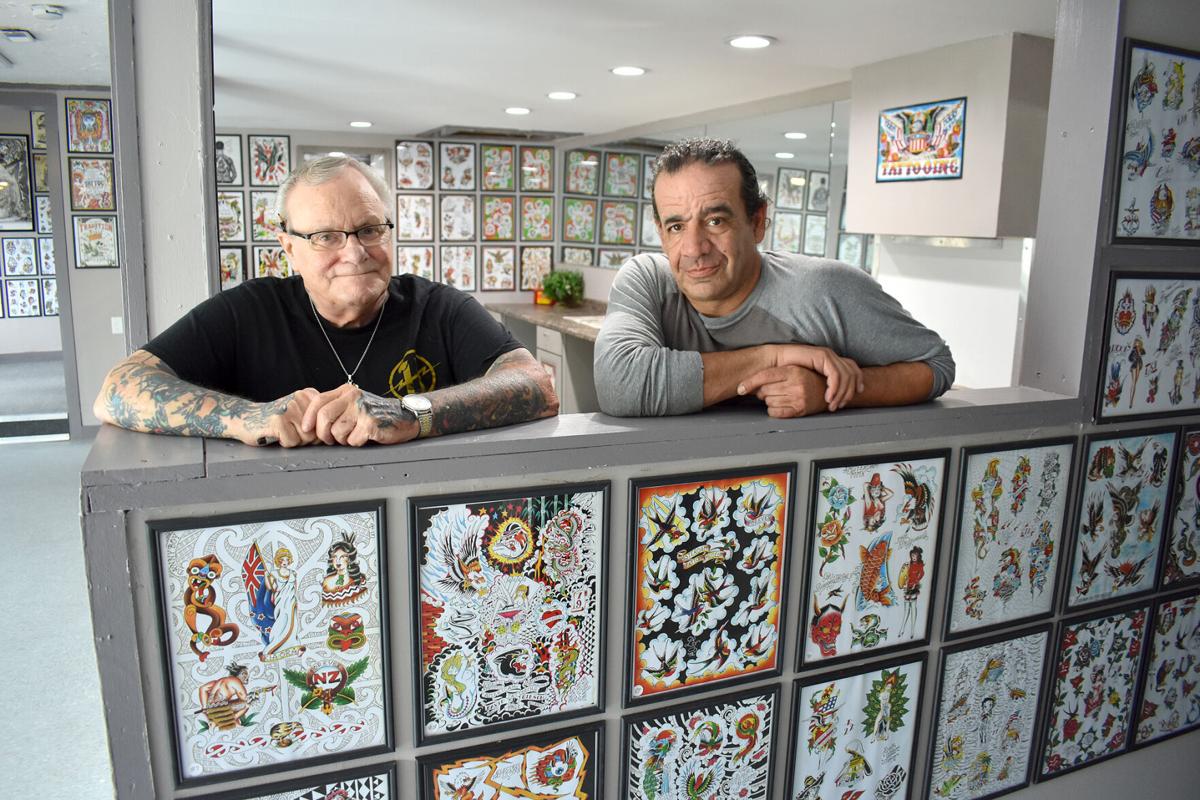 Jeff Denoncour and Anthony Santagate have opened Weirs Beach Tattoo Co. in a storefront that has been a tattoo parlor for more than 20 years. (Adam Drapcho/The Laconia Daily Sun photo)

Hernerce Popo, head chef at Beach Taco on the Winnipesaukee Pier, has found that his blend of Mexican presentation and Haitian flavors has been a hit, such as with the Cajun lobster tacos he's holding here. (Adam Drapcho/The Laconia Daily Sun photo)

Jeff Denoncour and Anthony Santagate have opened Weirs Beach Tattoo Co. in a storefront that has been a tattoo parlor for more than 20 years. (Adam Drapcho/The Laconia Daily Sun photo)

LACONIA — There’s a new taco stand on the Winnipesaukee Pier, and a storefront that was long a tattoo parlor is again open, both of which are examples of entrepreneurs who have decided to double down on their investment in Weirs Beach.

Carol Adkins is in her third year of ownership of the Compass Café, located on Lakeside Avenue. As her restaurant gained a following, she started to have a problem.

“We needed to fill a need at Compass, a good and bad thing was takeout was so busy on the weekend that we couldn’t keep up with demand for sandwiches and everything to go,” Adkins said. Walk-up take-out business was so brisk that her kitchen was struggling to keep up, resulting in longer wait times for her dine-in customers. That’s why she decided to open Beach Taco, a short walk away, on the Pier.

Adkins, whose food is gaining a reputation for being a bit healthier than the usual Weirs Beach fare, said she picked tacos because they are quick and portable, and something that no-one else was offering.

“We’re looking for a cleaner, fresher alternative. There’s plenty of fried dough and burgers and everything else,” she said.

To lead Beach Taco, Adkins hired Hernerce Popo, a Miami transplant who brings his own palate to the kitchen. Popo grew up in Florida in a Haitian household, and spends time every year on the Caribbean island.

Tacos are, of course, a Mexican food, but Popo can’t help but bring his Cajun sensibilities to the menu. Their most popular taco so far complicates things further by incorporating one of New England’s most iconic proteins, lobster.

The cajun lobster starts with a familiar combination of flavors – lettuce, lobster, a little bit of mayonnaise – but then adds the warmth of Cajun spices, and the crunch of seasoned cucumber chunks.

Popo, who said he’s enjoying the easier pace of life in Laconia, as opposed to Miami Beach, has always wanted to work with food.

“When I was four or five, I would stay outside and play in the mud. I would add sticks and grass to it and swear I was a chef,” he said. Adkins said that his ability to blend flavors from different cultures is sure to earn fans on the Pier.

“Hernerce is a rock star,” she said.

On the opposite side of Compass Café from Weirs Beach, a small storefront is about to re-open, and will again offer the same service it had for many years: tattooing.

Jeff Denoncour, who is semi-retired and has 48 years of experience as a tattoo artist, will lead the business. The owner is familiar face to Weirs Beach, Anthony Santagate, who owns the nightclubs Tower Hill Tavern and The Big House.

This won’t be Santagate’s first foray into the body art business. He got into business for himself by selling temporary tattoos in Tarlson’s Arcade in 1976. “I’ve been a part of The Weirs for all that time,” Santagate said.

Santage went from selling tattoos to running a pizza shop at the base of Tower Hill, eventually turned the building into a two-story nightclub, and more recently purchased the Paradise Beach Club and turned it into The Big House.

Santagate didn’t like seeing the storefront across the street, at 346 Lakeside Avenue, dark after being a tattoo parlor for so long. “Boulevard” Bill Stinson was the first artist to do ink there, converting it from a motorcycle shop in the 1990s. A string of other artists ran the shop over the following years, and when it became available to rent, Santagate said he decided to open a tattoo shop even though he doesn’t have any himself – and doesn’t plan on it, either.

He may not want any tattoos, but he knew what kind of tattoo shop he wanted: someplace clean and inviting, and run by someone like Denoncourt, who knows how to handle a tattoo gun.

“Everything is brand-new, it is going to make for a nice experience for the public,” Santagate said.

Denoncourt said the shop, which is called the Weirs Beach Tattoo Co., will offer “nice, clean, traditional tattooing.” Tattoos aren’t for everybody, he said, but then, “A lot of people consider it a form of therapy.”

“The reasons for getting a tattoo are as varied as each individual. It could be the passing of someone, the birth of someone, but the two most prevalent are the happy occasion or a sad occasion,” Denoncourt said.

Santagate remodeled the interior of the shop, said it will be open year-round, and will do especially brisk business during the several block parties and other public events planned for Weirs Beach.

“Having a clean, nice tattoo shop in this area is going to be really good,” Santagate said.

Expanding his holdings in the middle of a pandemic might sound like a strange business move, but he said he felt he couldn’t turn it down.

“It’s stressful, but when the opportunity is there, you have to take it,” Santagate said.

LACONIA — Five years ago, Donald Gagnon was hanging out in Fort Lauderdale, Florida, when he saw a strange vessel float past. It looked like a…