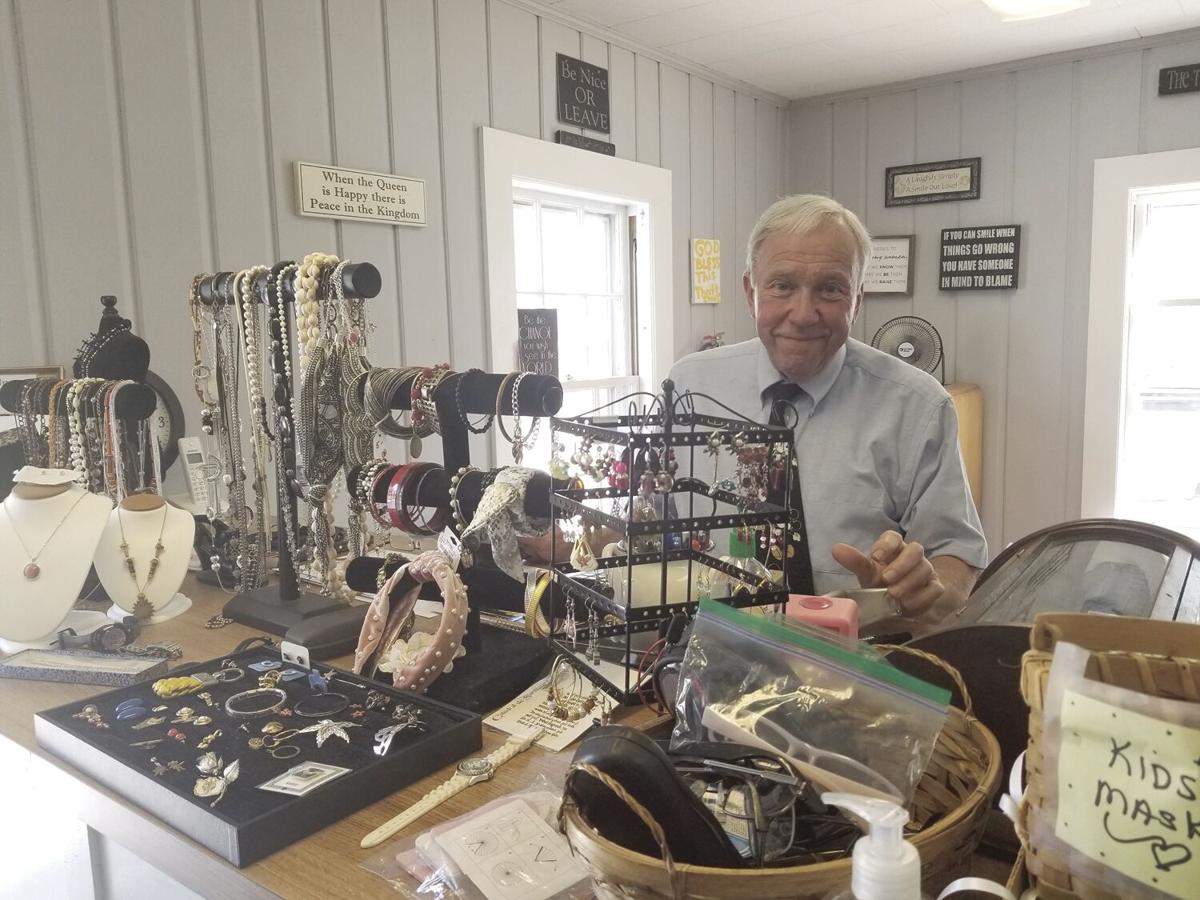 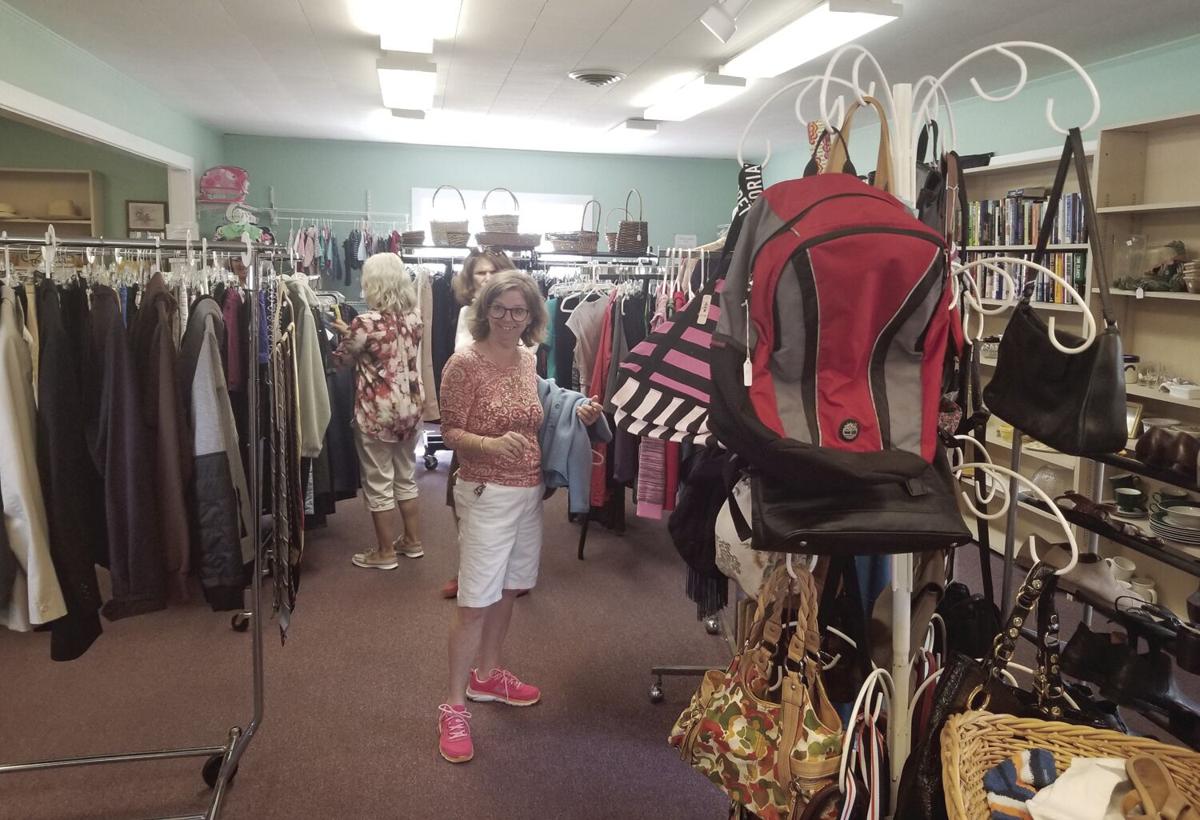 MOULTONBOROUGH — This cottage industry began in an empty bay at a mechanic’s garage.

Its rotating inventory now includes previously-owned, high-fashion apparel, furniture from vacation homes on the lake, hiking boots created by the designer Prada, pocketbooks by Coach, and one-of-kind treasures such as the wooden box-shaped musical instrument that was resold on eBay, raising $450 to buy food.

Today the Lakes Region Food Pantry and Thrift Store is a pint-size business with a gallon-size mission. Its furnishings-and-fashions-to-food voucher system benefits families who might otherwise go without healthy meals, or anything nutritious for snacks.

Last year, from January through December — despite COVID’s three-month shutdown — the thrift store sold enough lightly-used jewelry, collectibles, furniture and clothing that had been donated by area residents to buy $93,000 in monthly grocery vouchers that local individuals and families redeemed at Hannaford in Meredith and EM Heath in Center Harbor. Another $26,520 went to vouchers for parents to buy healthy ingredients to make children’s lunches over the summer.

“We have some things donated that are worth $300 to $500,” said Amy Logue Norton, the thrift store’s manager, who remembers how tough it was to make ends meet as a single mother of five.

It’s a simple, but unusual system — one that has thrived in the wake of the pandemic, as shopping and donations have soared at most area thrift stores, benefiting community-based social missions.

It’s a win for people who seldom have many choices — other than the choice between paying rent or buying medicine, clothing or food. Leaner times are expected to return when COVID’s government benefits — which include boosted food stamp benefits — come to a halt or trickle off, making thrift store shopping more of a necessity and a smarter way to stretch a dollar.

Despite being closed for three months during the height of the pandemic, 2020 was a record year for many in the thrift store business, in spite of the global health crisis that ravaged most other retailers.

“We had our best year ever in 2020 and a couple of record-breaking months already” in 2021, said Lisa Stevenson, manager of Hearts and Hands Thrift Shop on Maple Street in Meredith, which was voted the Lakes Region’s best thrift store last year. “Shopping is up and dropping off is up. Clothes are flying out of here, along with general household and kitchen items.” Thrift stores resell donated items to raise money for charity, in contrast to consignment stores, which resell items for consignors and take a percentage of the sale price.

In the wake of COVID, “I’ve seen a lot more faces, and a lot of new faces,” said Meghan Marshall, manager of the Salvation Army Thrift Store on Salem Street in Laconia.

After COVID, “There was tremendous pent-up demand to come back into the store, and a tremendous demand to bring donations,” said Tom Witham, treasurer of Hearts and Hands, a cooperative effort of Meredith churches Trinity Episcopal, St. Charles Catholic Church and First Congregational Church. In five years, sales at Hearts and Hands have funded $300,000 in grants to nonprofits, including $50,000 in the first four months of this year, Witham said. “We help people who depend on purchasing things here. At the same time, it gives people a place to drop off things that don’t go to the landfill.”

“We make more now in three days than we made in five days before COVID,” said June Huot, store manager at the St. Vincent de Paul Thrift Store on Union Avenue in Laconia. At the start of the coronavirus pandemic, “We were absolutely inundated with donations. We had to rent outside storage space to handle it,” she said. The first week in June, when stores were allowed to reopen, the thrift store, which funds charities that include its food pantry, “opened up to business like we’ve never seen before. Half the time, in the morning, people were lined up down the ramp and around the corner.”

Now, the thrift store clientele includes a broader age range, Huot said. Young parents buy thrift store clothing for their young children. Employees who work in Laconia shop here at lunch. Older customers flock here on ‘Senior Tuesday’ for 30 percent off, and “may buy four or five things, or baskets of stuff,” she said. A small number of regulars come to buy clothing and collectibles to resell online.

“Now we have a much younger clientele,” said Huot. “High school and college age and early 20s – which we never had at all.”

Thrift store shopping is nothing new. Many people patronize different stores on different days of the week, sometimes once in the morning and again in the afternoon, allowing for new items to appear on the shelves and racks.

Thrifting is “a hobby that people enjoy doing” that serves a purpose, financially and socially, including after in-person shopping fizzled during COVID, Huot said. “We get people who come in two or three days a week. They socialize, and we chat back and forth.”

“Life has changed because of COVID,” Huot said. Thrift stores now brace for bigger crowds. “On days when we’re closed, we just run around trying to pick up to get ready for the next day we’re open.” Adequate staff can become a challenge, even for St. Vincent de Paul Thrift Store, which has about 60 volunteers who take regular shifts. “The volume of stuff that comes in here as quickly as it moves out. They work their tails off in here.”

With the incoming bounty, some thrift stores are offering more deals to move merchandise out quickly.

“We do a lot of dollar clothing days. Some people come twice a day to see what we’ve put out,” said Lt. Brian Perks, who oversees the Salvation Army Thrift Store. It has become a magnet for people looking for vintage clothing for their own collections or to resell, Perks said.

This month, the Lakes Region Food Pantry and Thrift Store started half-off everything the first Friday of the month, which translates to second-hand or donated new clothes at 50 cents to $2 per item.

“We’ll have a line wrapped all the way around here,” said manager Norton. A "gourmet rack" features higher-end clothes that are priced individually. “It’s like Filene’s Basement in here,” she said. “We have piles and piles of knick knacks up front. It’s crazy, but it’s fun.” Bargain hunting can turn into a giddy frenzy as people race and sift for things they want.

At the same time, COVID seems to have sparked a joy in divesting things you might have a weak tie to, but don’t really want and no longer need — a “big-cleaning” craze that began when more people were working from home during COVID and wanted a fresher, cleaner space.

Norton said de-cluttering surged in popularity 10 years ago after “The Life-Changing Magic of Tidying Up — the Japanese Art of De-Cluttering and Organizing” by Marie Kondo became a bestseller online and in stores.

“That really made thrift shops” as donations took off, Norton said. But at the same time, people still “love to get a good bargain.” Thrifting can become a revolving door of dropping off unwanted stuff and returning with newfound treasures discarded by someone else – which combines the joy of giving with the pleasure of getting a good deal.

It’s a lure of abundance and value. “The quality of the merchandise we get in here,” said Nancy Chapman of Moultonborough, a volunteer at Lakes Region Food Pantry and Thrift Store. “The generosity of this community is amazing.”

“We’re in such a great area," Norton said. "Everyone changes things out all the time. They would rather donate than sell.”

“We have customers who come in every day to wait for the truck to come,” laden with donated things, said Huot at St. Vincent de Paul. “What I could use is about 10 more volunteers.”

SANBORNTON — They are co-angels in the battle against food insecurity.