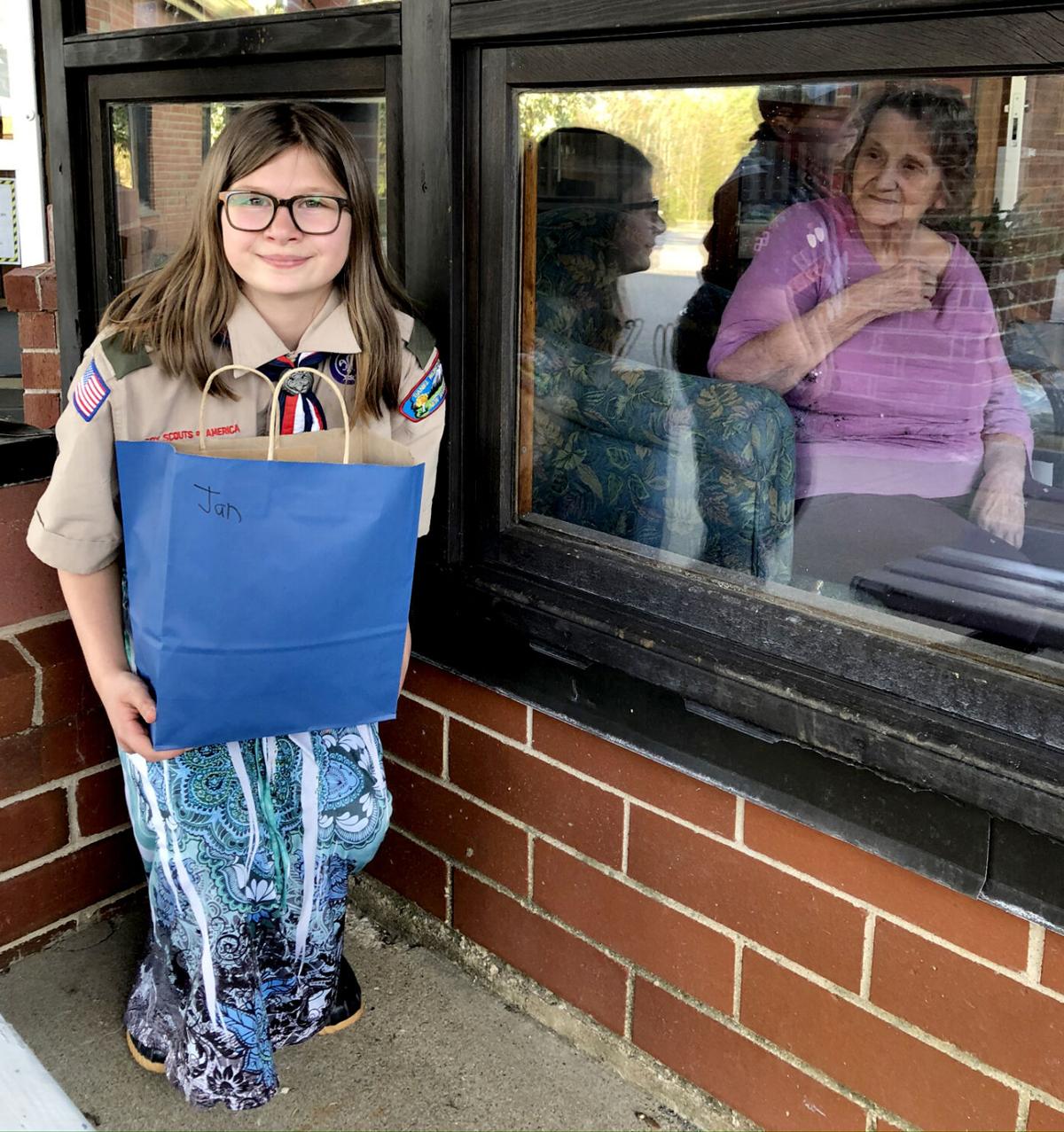 Jan Atherton, 85, has a visit through the window of the Belknap County Nursing Home with her pen pal, Jayd. (Courtesy photo) 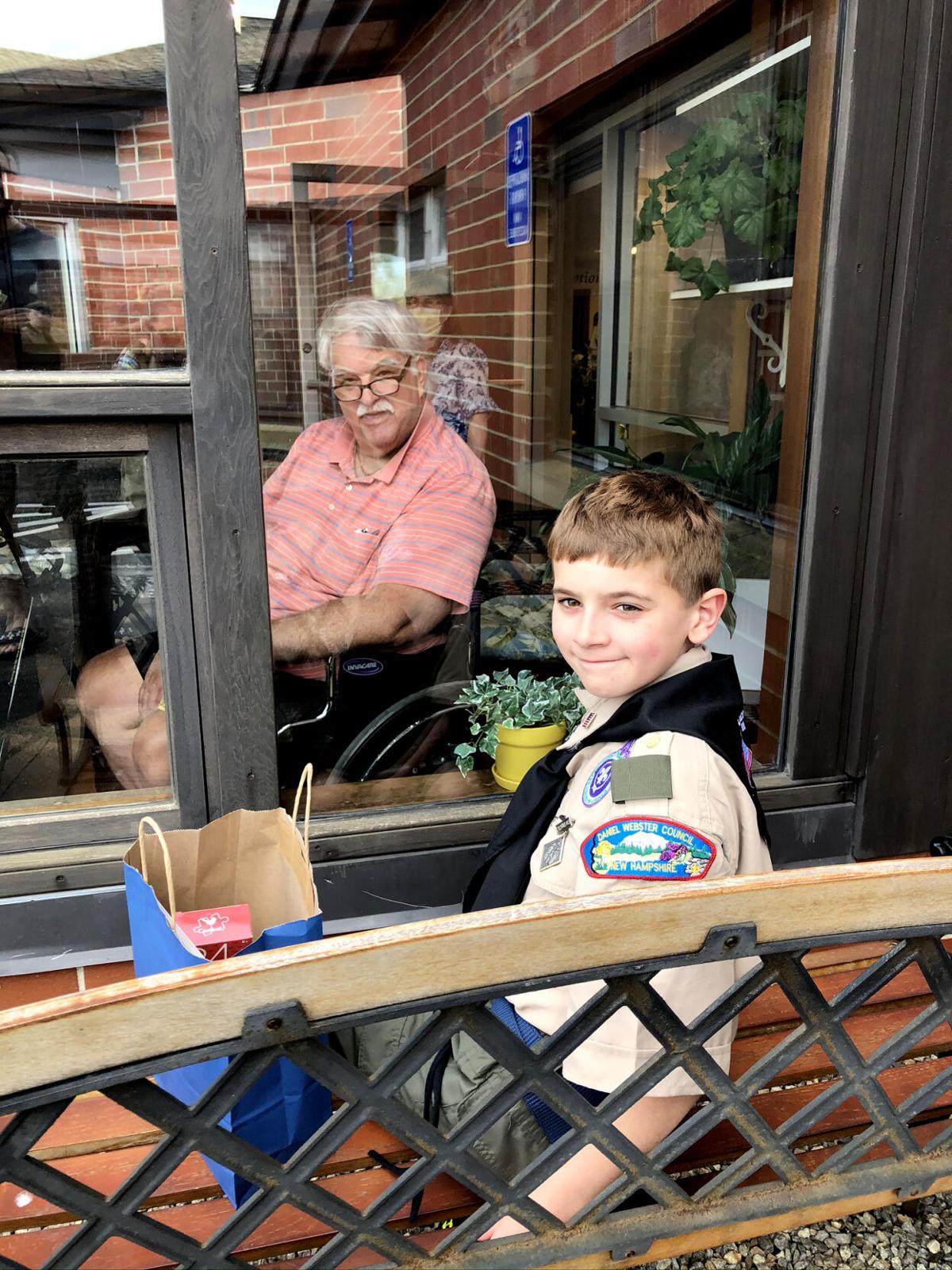 Ted Shastany, 70, has a visit through the window of the Belknap County Nursing Home with his pen pal, Cameron. (Courtesy photo) 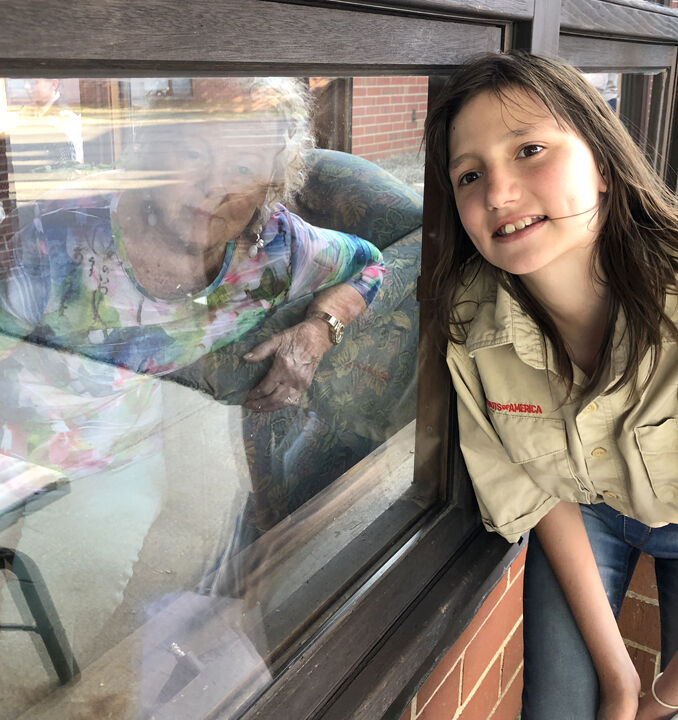 Judy Wallace, 85, has a visit through the window of the Belknap County Nursing Home with her pen pal Madison. (Courtesy photo) 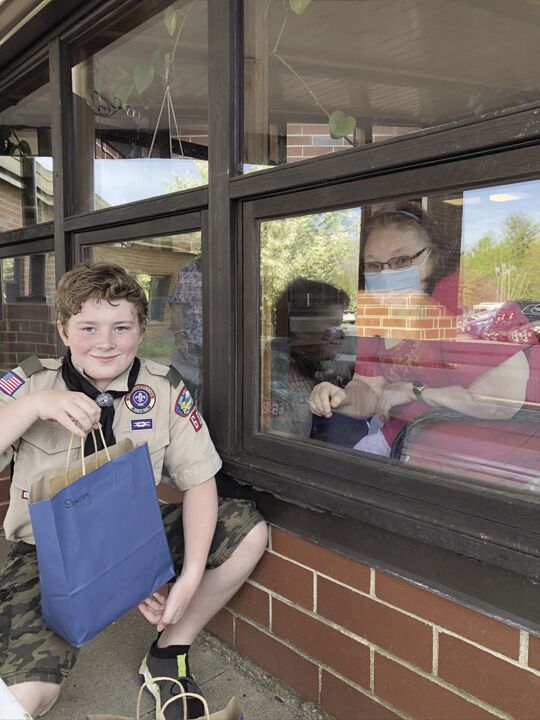 Sharon Baird, 69, has a visit through the window of the Belknap County Nursing Home with her pen pal Alex, a member of the Boy Scouts. (Courtesy photo) 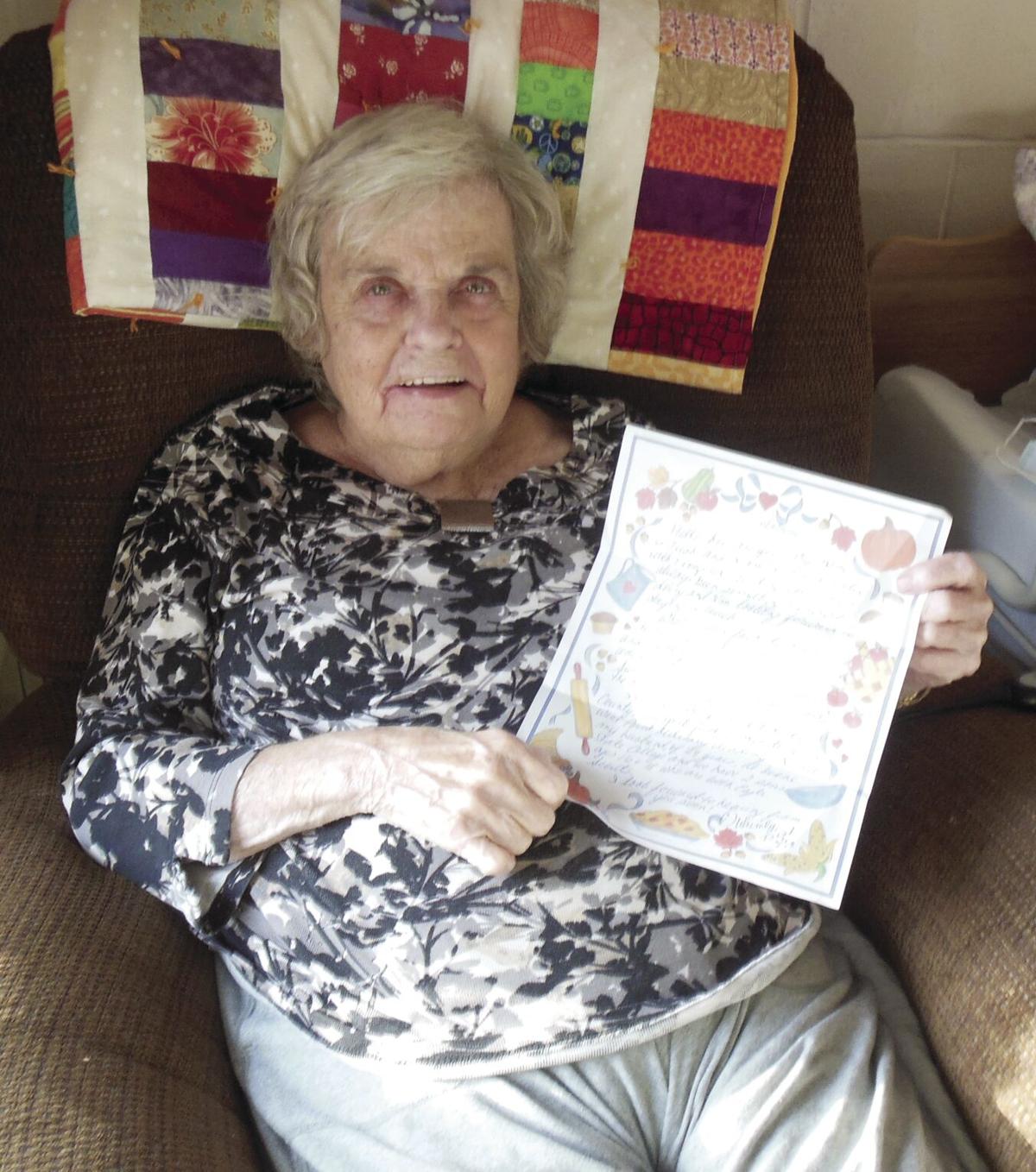 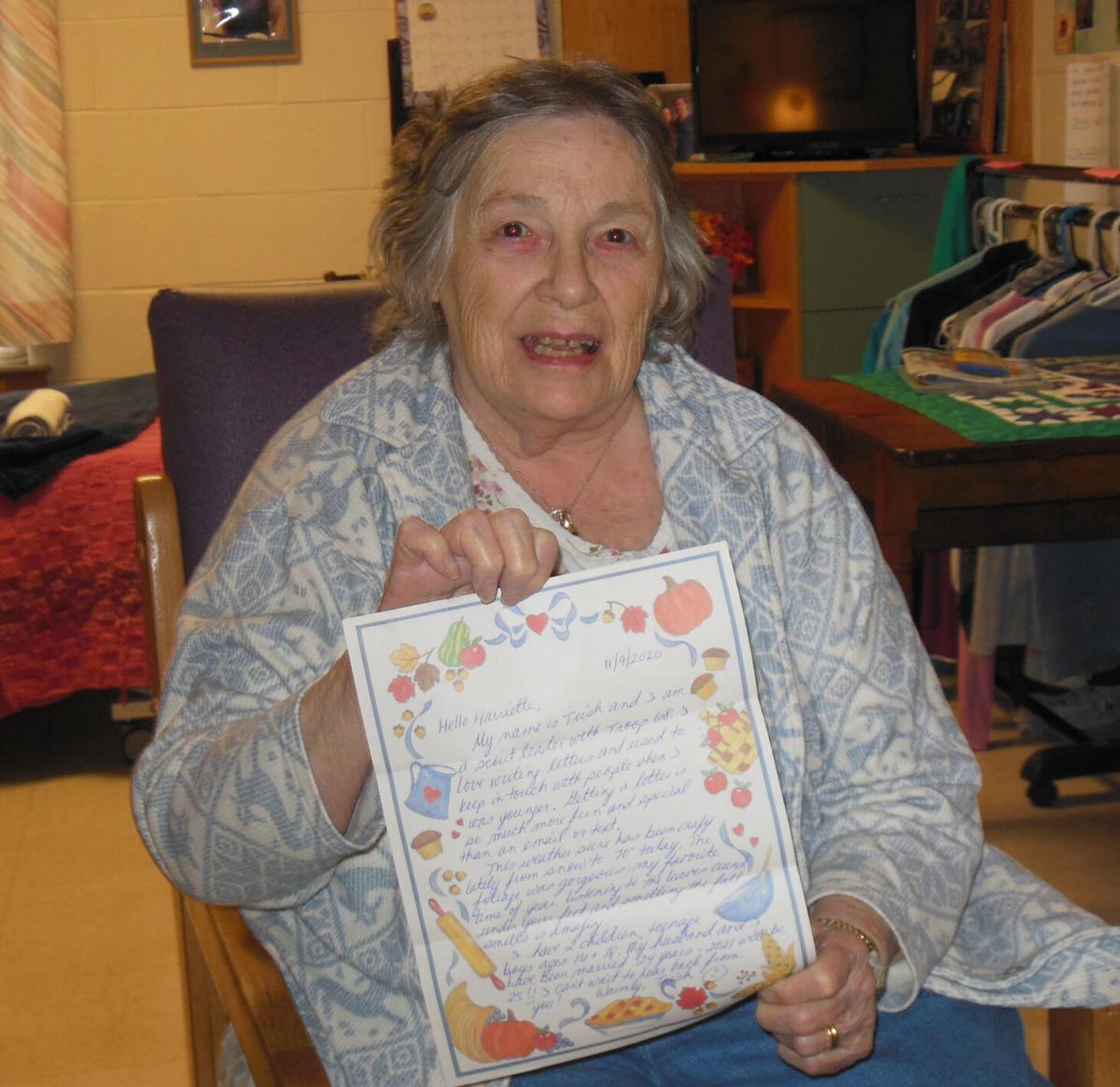 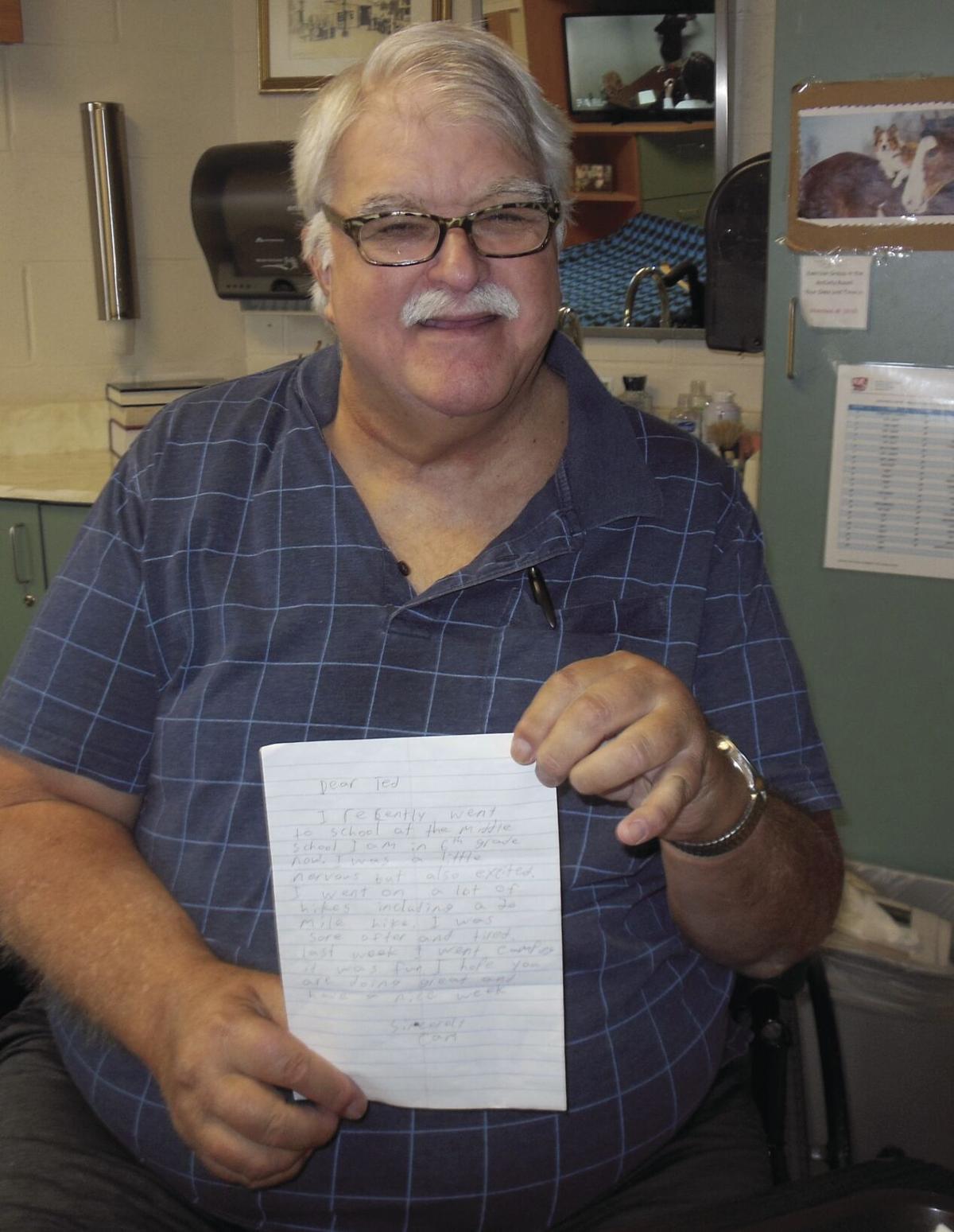 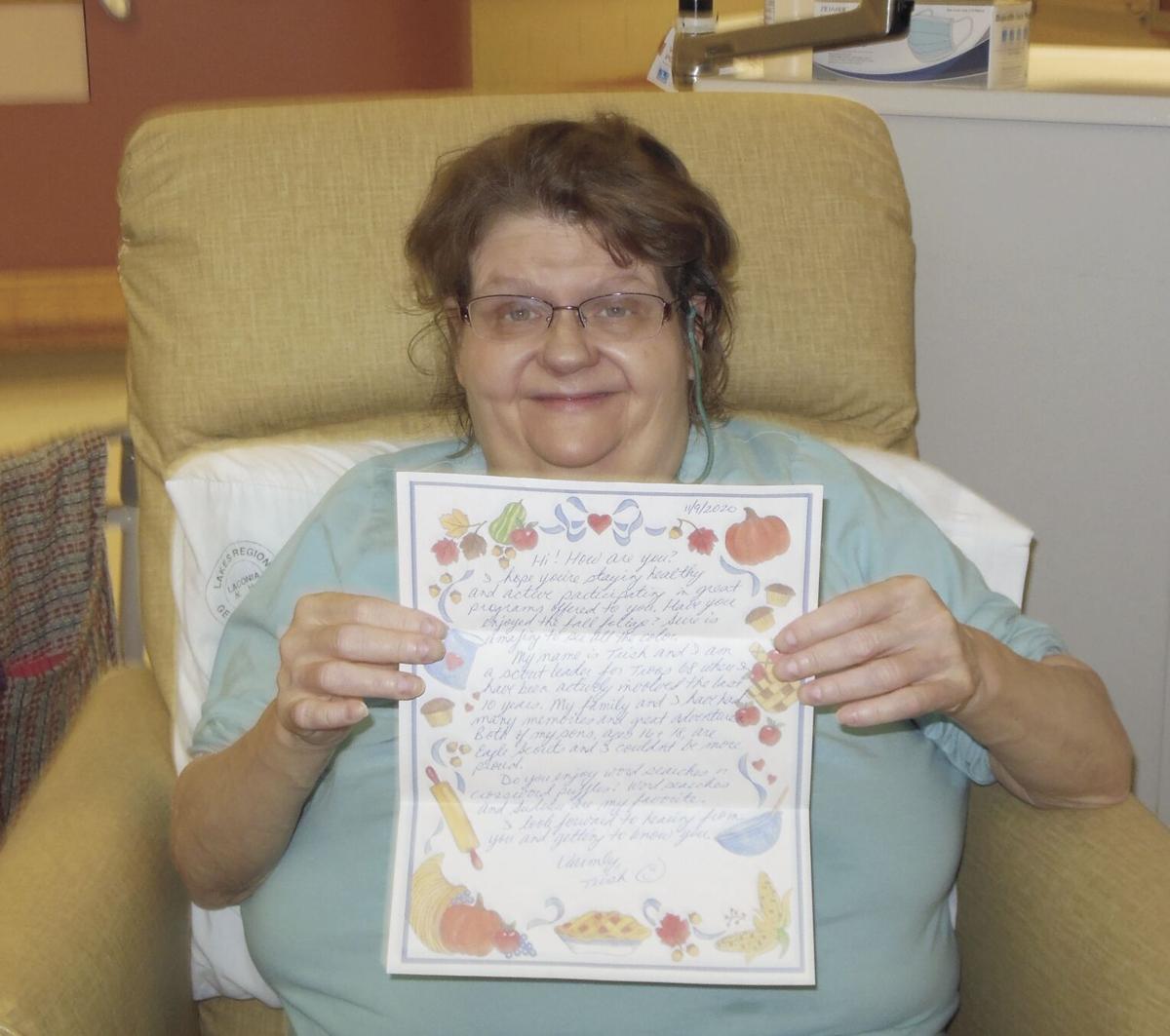 Jan Atherton, 85, has a visit through the window of the Belknap County Nursing Home with her pen pal, Jayd. (Courtesy photo)

Ted Shastany, 70, has a visit through the window of the Belknap County Nursing Home with his pen pal, Cameron. (Courtesy photo)

Judy Wallace, 85, has a visit through the window of the Belknap County Nursing Home with her pen pal Madison. (Courtesy photo)

Sharon Baird, 69, has a visit through the window of the Belknap County Nursing Home with her pen pal Alex, a member of the Boy Scouts. (Courtesy photo)

LACONIA — Letter writing may no longer be in fashion, but don't tell that to the boys and girls in Laconia Scout Troop 68 and a cadre of Belknap County Nursing Home residents.

They're reviving the time-honored tradition of taking pen to paper and handwriting a personal message – then mailing it to someone they care about and want to get to know.

Especially during COVID-19, when nursing home denizens are quarantined in rooms and communication with loved ones and the outside world is limited to Face Time or Zoom, the letters come as a highlight of a predictable day and feel more intimate – like a gift someone has carefully picked out. The letter writing is also stimulating for people starved for affection and interaction, and presents a chance to make new friends.

And the benefits run both ways, including to 12 scouts who make it a monthly habit.

“They enjoy it. They look forward to writing. I think the biggest thing is getting the letters back,” said Cassandra Prescott, the scout leader who launched the pen pal program nearly three years ago, when her son was 9 and in Cub Scouts. “I’ve seen them grow and ask, what can we bring” to delight their nursing home pals? For Prescott’s son Alex, now 12, the answer was baking homemade snickerdoodle cookies.

At the Belknap County Nursing Home, Lyn Niskala, a recreation assistant, delivers the scouts’ missives to 12 to 13 residents in their late 50s through 90s.  “They are very excited when she passes the letters out. And they are very excited to write back,” said Brenda Twardosky, recreation director at the nursing home.

According to staff at other skilled nursing facilities, some have tried jump-starting pen pals, but the program has been more of a one-and-done thing, mostly just handwritten well-wishes in holiday cards. Communication fizzles when the holidays pass.

But the county home pen pal outreach has morphed into something self-sustaining because it’s heartily enjoyed, the participants say. Some members of Troop 68, which now consists of 16 boys and 7 girls ages 11 through 17, have been writing letters for over two years, Prescott said.

Alex Prescott said he looks forward to updates from his pal, Sharon Baird, “because it’s different stuff, different stories each time. I like asking questions and getting answers. She’s become a friend.” He enjoys visiting her at the nursing home whenever possible, he said.  In the past they’ve played bingo and Go Fish.

The residents also look forward to seeing the scouts in person – even if that means smiling and shouting through window glass in the community room, while the scouts stand outdoors – which has been the protocol during COVID. Walkie-talkies have helped with hearing and volume control.

Through the program, Prescott said she’s seen growth in her son – a joy in being an agent of kindness as well as a dependable correspondent. “Since March, they haven’t been able to go into the facility. We haven’t stopped the connection. We write to them,” sometimes twice monthly, she said.

At the nursing home, letter day is a big event. During COVID, the messages have continued like clockwork.

For a year and a half, Ted Shastany, 70, has been pen pals with Cameron Lacroix, 11, who lives in Laconia. Shastany moved to the nursing home after retiring as janitor at Laconia High School, where he knew Cameron’s father, a teacher.

Through their letters, Cameron is “getting an internal view of the nursing home, and I’m getting an external view of what’s going on in the outside world,” Shastany said. “He tells me about life at school and home and his activities in summer,” and describes his fishing, camping and hiking trips with his parents.  “I tell him how we’re doing here, what life is like, what the food is like, what we’re doing for activities, and how the staff and nurses are treating us.”

“He and I like to socialize,” said Shastany. Before the recent return to quarantining in rooms, Cameron would “come up to the window and we would communicate through the glass. It pretty much feels like we’ve become friends.”

Niskala, a staff member who helps some residents read and write messages, said the letters dispel residents’ loneliness and isolation. “They’re absolutely excited when they get a letter or a visit," she said. "The letters are something very special for them.”  For residents who can no longer write, staff transcribe their messages into notebooks, which are sent back and forth.

Judy Wallace, 85, of Gilford, is pen pals with Madisyn Nicoll, 10, of Laconia. “She writes about her animals.  She’s a sweet girl. I write back, asking how school is going, and if she has brothers and sisters. She was here when my granddaughter brought my great grandson. She wrote, ‘I’m hoping when I come to see all your friends that I can see your great grandson, too.’  So I wrote, ‘He’s over a year old now, walking and talking.  If you come to the nursing home now, I’ll make sure you see him.’”

“I enjoy being pen pals.  I wish I saw more of her,” Wallace said. “She’s always friendly and happy to see me, and her father comes with her and he’s happy and friendly, too. We’ve been writing back and forth for about a year.  It’s nice for her and me, too.”

David Plourde, 59, of Lakeport, is Cassandra Prescott’s father, and the troop’s co-leader.  Plourde was in scouts as a boy, and agreed to help his daughter when she could find no one else to step up. Five years later, he’s a convert. What started as a community service project for local scouts has become a valuable piece in Plourde’s life as well.

“It was a learning curve for all of us. Some of the pen pals passed on. The kids had to learn to deal with that.  But the kids handled it well. And the residents love the heck out of them,” said Plourde.

“It’s really cool to see those faces light up when they see those kids and start to talk to them,” said Plourde. “Watching these kids learn to interact and look forward to seeing their pen pals has been something. They care about them. These are people they’ve never known, and they built a relationship. You watch their eyes light up when they start talking and playing games with them.”

“I’ve become pretty fond of it, too,” said Plourde. “It brings you down to a little bit of reality. You live your life and sometimes, this is where you end up. These are some of the people who have been forgotten.”

Among the scouts, the pen pal program has blossomed and the next group is growing into it, he said. “If some kidsdrop out and are busy and can’t show, we have kids who want to go. Just looking at them smiling and hearing the kids talk about it afterwards. They come out of their shells and it’s nice to see. Most of the kids still have their grandparents, and this is the first time some have not been able to visit granny or grampy. The older residents reminisce about when they were kids,” and give the scouts a rare window on what their younger years were like.

Most heartwarming was what happened on a pre-COVID visit, when Plourde’s grandson’s pal didn’t feel well and said she needed to lie down. “Are you OK?” his grandson asked. His concern continued, and days later he wanted to know if he could find out. “Their attachment grew over time,” said Plourde. “It brought me to the fact that people can care, even if it’s not your grandfather or your aunt. People still need someone to care about, and that makes a big difference.”

Plourde said there have been surprising rewards for him, too. The troop is now co-ed, one of the first in the Lakes Region. “Every time (one girl in the scouts) sees me, I get a hug,” he said. “I wouldn’t trade that for the world.”

Saving Thanksgiving with potluck and gratitude

Saving Thanksgiving with potluck and gratitude

LACONIA — When asked what he is grateful for, John-Paul Kehoe lights up – perhaps with more intensity than other downtown shoppers on a sunny …

Drinking spikes as anxiety and depression peak at home