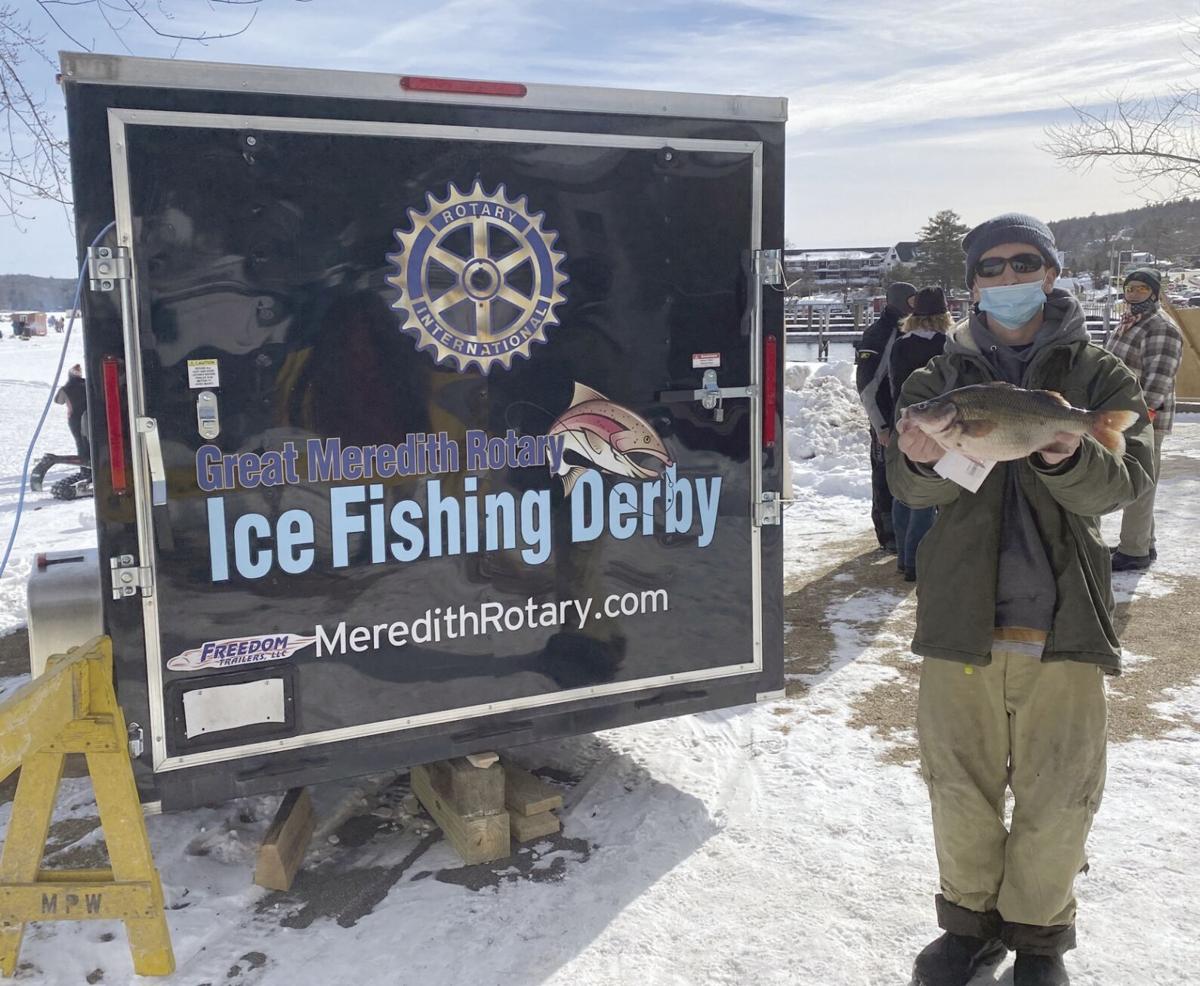 Cameron MacDonald of Pittsfield, Mass., holds up a white perch –– measuring 15.5 inches long and weighing 2.61 pounds – that he pulled out of Lake Winnipesaukee early Saturday morning. He then had to wait all weekend to find out of it was big enough to win the white perch category and qualify him for the grand prize in the Great Meredith Rotary Fishing Derby. It was, and his ticket was the winner pulled from among the seven finalists, good for a $15,000 payday. (Courtesy photo) 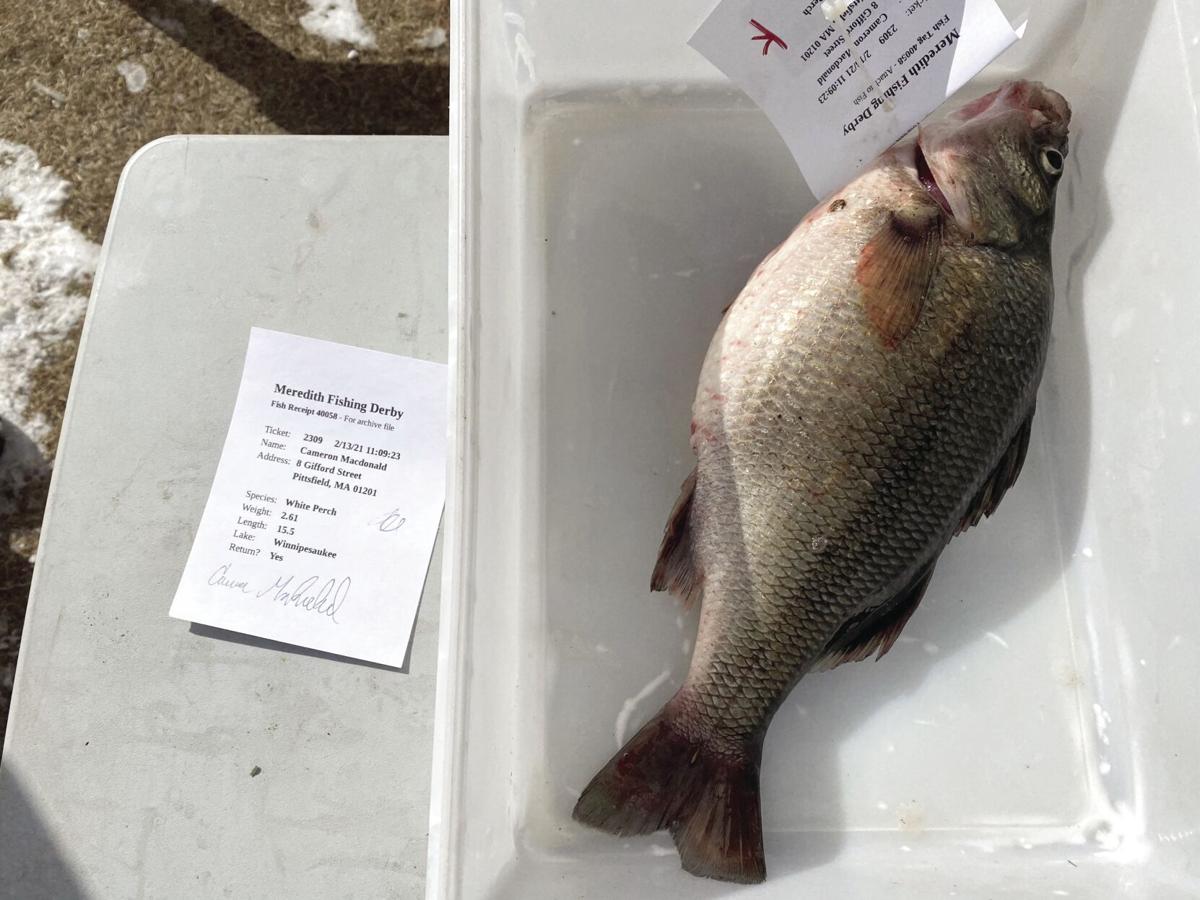 Cameron MacDonald caught the biggest white perch of his life around dawn on the Saturday of the Great Meredith Rotary Fishing Derby. (Courtesy photo)

Cameron MacDonald of Pittsfield, Mass., holds up a white perch –– measuring 15.5 inches long and weighing 2.61 pounds – that he pulled out of Lake Winnipesaukee early Saturday morning. He then had to wait all weekend to find out of it was big enough to win the white perch category and qualify him for the grand prize in the Great Meredith Rotary Fishing Derby. It was, and his ticket was the winner pulled from among the seven finalists, good for a $15,000 payday. (Courtesy photo)

Cameron MacDonald caught the biggest white perch of his life around dawn on the Saturday of the Great Meredith Rotary Fishing Derby. (Courtesy photo)

MEREDITH — There’s something about white perch that drives Cameron MacDonald to fish for them. This past weekend, that obsession paid off in a big way, as his 2.62-pounder earned him the grand prize in the Great Meredith Rotary Fishing Derby.

“That’s my main target species,” said the 23-year-old MacDonald, who lives in Pittsfield, Massachusetts. He said he has been participating in the derby for four years. He caught his winning fish on Winnipesaukee at dawn on Saturday.

“It’s a rush, it’s fun finding the biggest whites out there in the lake,” MacDonald said about his fascination with white perch. “There’s only two times of day you can catch them, morning and dusk. It’s the kind of fish that drives me to chase them.”

He said he pursues white perch the way a hunter stalks prey.

He found them on Saturday morning, even noticing a larger one on his fish finder.

“I was on a nice school of them. I saw the big one come up on the Vexilar, it was on from there,” MacDonald said.

He knew he had a good fish when he pulled it up – the biggest white perch he’s ever caught, in fact, and it was made sweeter because he shared the moment with his grandfather, Scott MacDonald, the man who taught him to fish.

That was at the very start of the derby, though. MacDonald had to wait to the end of that day to see if his catch would take home the daily $500 prize for the biggest fish of the seven species accepted in the derby, caught in any of New Hampshire’s freshwater lakes or ponds during the weekend. Then he had to wait until Sunday to find out if his was larger than any whites caught that day, which would mean he had a one in seven chance to have his name drawn for the grand prize of $15,000.

“It was a freaking roller coaster of emotions, I’ve never won anything like that in my life. I’m definitely a happy person,” said MacDonald, who is currently pursuing licensing necessary to begin an HVAC career. He said he planned to buy some new fishing gear and take his family out for a nice dinner, and as for the rest of his winnings, “who knows.”

A different kind of catch

MacDonald wasn’t the only one celebrating on Saturday. Eric Peterson and Shannon Tinker took the opportunity to get married on Meredith Bay in front of their Bud Light-themed bobhouse.

Peterson, a heavy equipment operator from Meredith, and Tinker, a product manager for a medical device company, met about two-and-a-half years ago and, when it came to talk of a wedding, they both agreed that a conventional ceremony wasn’t for them.

“We both wanted something simple, we both like being down there on the ice even though we never catch anything,” Peterson said. They figured they’d have just their justice of the peace to officiate, the two of them, maybe a handful of family members to witness.

When the time came, though, people from all over the bay put down their fishing poles and walked over, socially distanced, to take their place in an impromptu wedding party.

“People took five minutes out of their day and took part in it,” Peterson said, estimating that there were around 75 people there.

Fred Strader, chair of the Rotary Club’s Derby Committee, said he was weighing a fish at around 1 p.m. on Saturday and heard a loud cheer when the happy couple’s ceremony concluded. He said neither he nor any other Rotarians could recall a wedding taking place at the derby.

The 2021 derby was a high water mark, Strader said, with more than 5,300 tickets sold. He said that’s easily above recent years, and is likely due to a confluence of factors. First is that fishing has gained in popularity during the pandemic, and second is that the weather was favorable.

“It all added up for a great result for us and for the community,” Strader said.

The Rotary Club debuted a new software system this year, which permitted them to post real-time updates to their online leader board, replacing the physical leader board that usually draws a crowd by the derby headquarters.

He said that the old-fashioned fish board will return as soon as coronavirus is history, but that the systems improvements will remain.

Strader said the effort of putting on the derby during a pandemic revealed how important it was to local residents and business owners, who were encouraging and supportive. The Tackle Shack donated prizes for all children who entered a fish, regardless of size, and Stewart’s Ambulance donated COVID tests for all of the derby volunteers, who work in close proximity in the derby HQ trailer.

“Everybody wanted the derby to happen, they look forward to it every year,” Strader said, noting that all of the money raised goes back into the community through scholarships and other charitable efforts. “It’s part of the community, this is part of New Hampshire and part of the Lakes Region. They wanted it to happen and they came out and supported it.”

“I want to thank all the fishermen and women who came out,” Strader said.