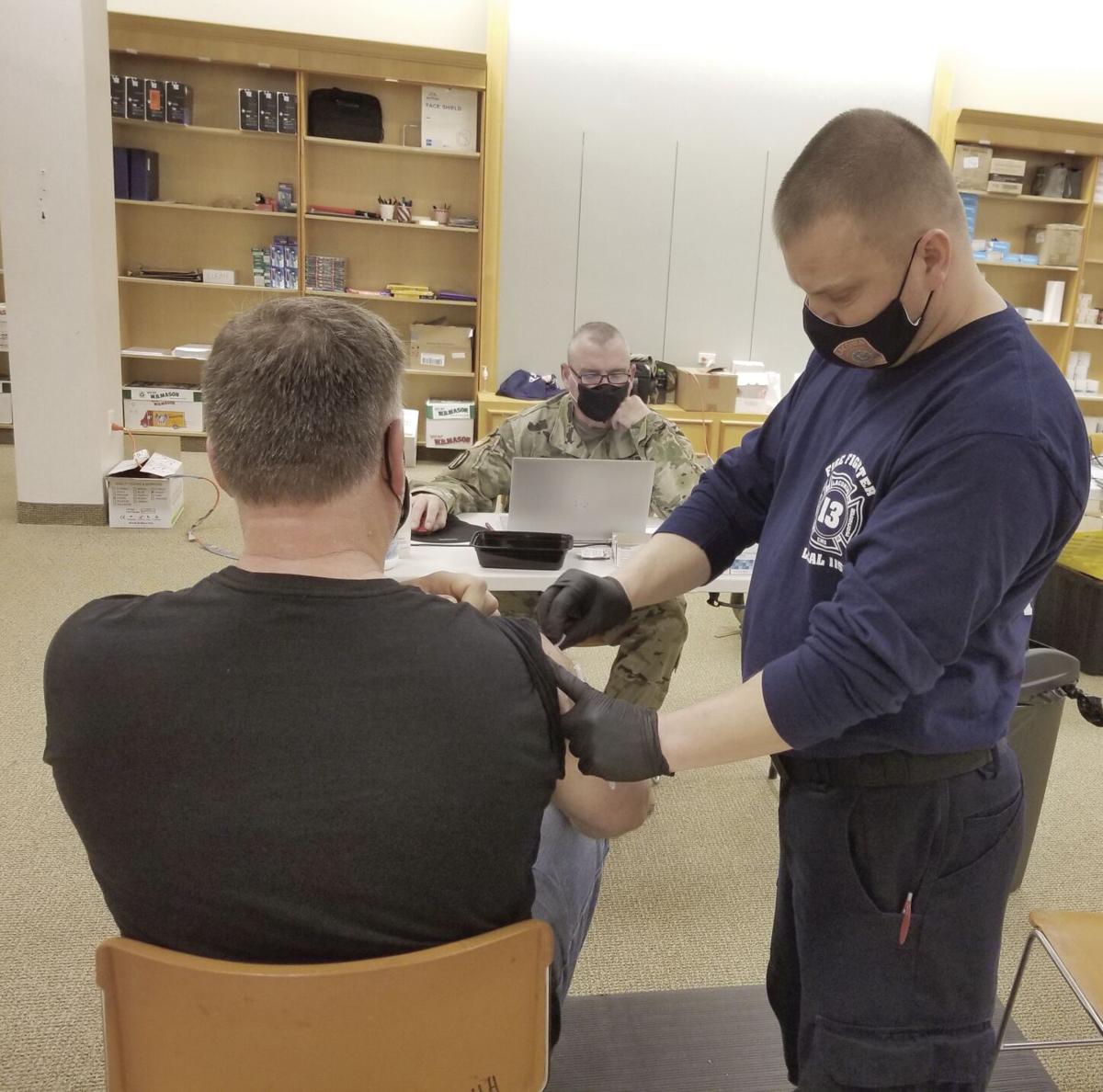 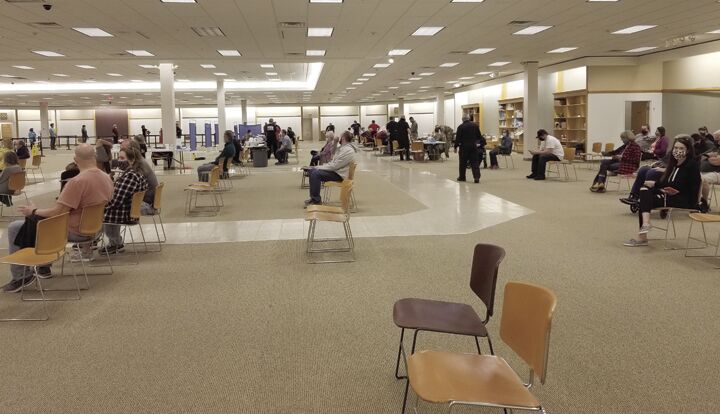 Despite delays and glitches when the vaccination sites first opened, the site at the Belknap Mall in Belmont is now able to move people through with little or no wait, according to NH National Guard staff. Crunch times sometimes occur when the site opens at 8 a.m., and around noon. (Roberta Baker/The Laconia Daily Sun photo)

Despite delays and glitches when the vaccination sites first opened, the site at the Belknap Mall in Belmont is now able to move people through with little or no wait, according to NH National Guard staff. Crunch times sometimes occur when the site opens at 8 a.m., and around noon. (Roberta Baker/The Laconia Daily Sun photo)

BELMONT — Between 8 and 10 a.m. on Thursday, during the first two hours of vaccination at the Belknap Mall, 232 people received COVID shots – and Shawn Stuart, 44, of Meredith was glad to get his.

“In March, I was still skeptical and undecided. Then, with discussing it with my doctors and doing a little research, I felt it was the right thing to do,” said Stuart, who has two chronic health conditions, and was relieved to get his second shot.

“If we all get vaccinated, it’s a pathway back to normalcy. If you look at it logically, this is the only path to being with family and friends, going to concerts, and having businesses completely open. To me, it’s a small sacrifice to getting back to normal life.”

Now that COVID vaccinations have opened to anyone age 16 and up, New Hampshire vaccination sites are seeing a rise, according to the state Department of Health and Human Services. The consensus among providers is that the effects of steady, building vaccination will eventually revive social and economic life after the year-long pandemic withered the world as we know it.

A survey published March 31 by the Kaiser Family Foundation showed that 61 percent of U.S. adults have gotten vaccinated or plan to as soon as possible, 17 percent plan to “wait and see,” and 13 percent say they will definitely not get the COVID vaccine — a number that’s held steady since December. Kaiser’s findings also show that 20 percent of Americans in rural areas are opposed to getting the shot, as are 30 percent of Republicans and white Evangelical Christians, according to those surveyed. That resistance worries public health and medical officials in the Lakes Region, who say herd immunity will be achieved when 70 percent of the public gets vaccinated.

In Belmont and Plymouth, two National Guard-run vaccinations sites are currently open 8 a.m. to 8 p.m., Monday through Saturday: the Belknap Mall on even-number days, and the Plymouth Armory on odd ones. In the mall, 1,200 to 1,500 residents typically funnel through daily over the course of 12 hours, said Capt. Raymond Youngs, the officer in charge at the Belknap Mall.

On Thursday mid-morning, 8 of 10 individual vaccination stations were open in the space that used to house Peeble’s, and there was no line at check-in — compared to opening-hour lines recently that snaked to the other end of the mall. Noon can also bring a rush, but otherwise the line varies and is often sparse, and the pace is relatively stress-free for patients and medical workers. “Even though you’re pushing people through, it doesn’t feel like you are,” Youngs said.

For almost everyone, the shot is painless and the angst is over in seconds. “You have to convince people that you actually gave them a shot, ‘Yes, here’s the empty syringe.’ There’s a technique after you do a few thousand,” said Staff Sgt. Donald Colcord, a combat medic who was logging vaccines and scheduling second vaccine appointments Thursday, while Laconia Fire Department paramedic Richard Raper swabbed arms with alcohol and administered the vaccines.

“It’s a little tougher when you’re doing this in a moving ambulance,” Raper said. The experience surprises the needle-phobic. “I haven’t seen anyone who’s too sour about it. Most people are so grateful to be able to see their grandmother and do family things,” said Raper.

The protocol is simple: At a desk at the entrance, NH driver's licenses or non-driver IDs and body temperatures are checked. Patients – who must have scheduled an appointment by calling 211 or booked online at vaccines.nh.gov, unless they are the spouse or family member accompanying someone who has an appointment – proceed to a second desk, where they are logged into a database which shows whether this is their first or second shot. Then they line up for the next vaccine station available. On Thursday just before 10 a.m., the queue numbered five or fewer.

Some people are nervous, because they fear needles and injections, but for the most part, “people are giddy and grateful,” said Sgt. First Class Thomas Reneau, who worked Wednesday at the site. People are relieved to get it over with. One extended family member, who had been waiting to schedule a shot as soon as possible, texted that she was in tears, Reneau said. “You can see the anxiety in some people. But the vast majority are just happy to be here.”

Greg and Kerry Watts of Moultonborough, both 38, feel it’s a rite of passage, essential to securing reasonable social life post-pandemic. “It also helps the community. We have two kids, 8 and 11, and they can’t get the shots. This helps protect them. I looked into the science a lot. I think it’s the right thing to do," Kerry said.

“Everybody knows more about the virus now. Hopefully, as more people get vaccinated, the numbers will trend down,” she said.

“Friends or people in town — they’re not hugely against it. But they’re not jumping to get it. Maybe they think it’s not that important,” said Greg. “This is quick and easy — easier than in most states where there’s more people.”

Compliance on the rise

Ongoing surveys of attitudes toward the COVID vaccines conducted by the Kasier Family Foundation show that vaccine compliance is rising among previously hesitant groups, such as Blacks. But resistance remains in certain demographics.

For Susan Dalton, 74, and her husband Bob, 86, of Laconia, who were reading in the observation section after being vaccinated, there was no question that they’d get the shot.

Going forward, they plan to gather cautiously with family and friends, but hesitate to dine indoors. “This makes you feel a little freer. But it doesn’t mean the door is open to do all kinds of foolish things,” Susan said. The masks, she said, are uncomfortable and inconvenient for everyone, but the couple will wear them in public until herd immunity is achieved, when roughly 70 percent of the population is vaccinated against COVID. “It’s not something we all love, but it’s certainly better than being on a ventilator.”

Gillian Dechert, 30 and her husband Myles, 34, drove from New Durham to get vaccinated before their baby is born in June. Gillian said her doctor reassured the couple that it was beneficial protection, not something that might harm the fetus.

“There’s a good chance the baby gets a lot of those antibodies and comes out better prepared,” Myles said.

“We’ve been vaccinated for everything else. It was just a matter of timing for us,” said Gillian.

According to data updated April 7 by the NH Department of Health and Human Services, 86,935 of New Hampshire’s 1.36 million residents have been diagnosed with COVID-19, 95 percent have recovered, and 1,250 deaths (one percent) have been attributed to COVID. There are 3,387 active cases counted statewide, with 96 people hospitalized.

Nationwide and in New Hampshire, vaccination rates vary by race and ethnicity. In the Granite State, 15.2 percent of white residents have been vaccinated, 9.7 percent of Asians, and 6.2 percent of Blacks and Hispanics now have vaccine coverage.

For more information on the vaccines and vaccine safety, NH and Lakes Region experts recommend these websites:

CDC Vaccine Information for You and Your Family

Many veterans usually don’t like to air their struggles or setbacks. Those things stay bottled up — partly because of an unspoken, understood …