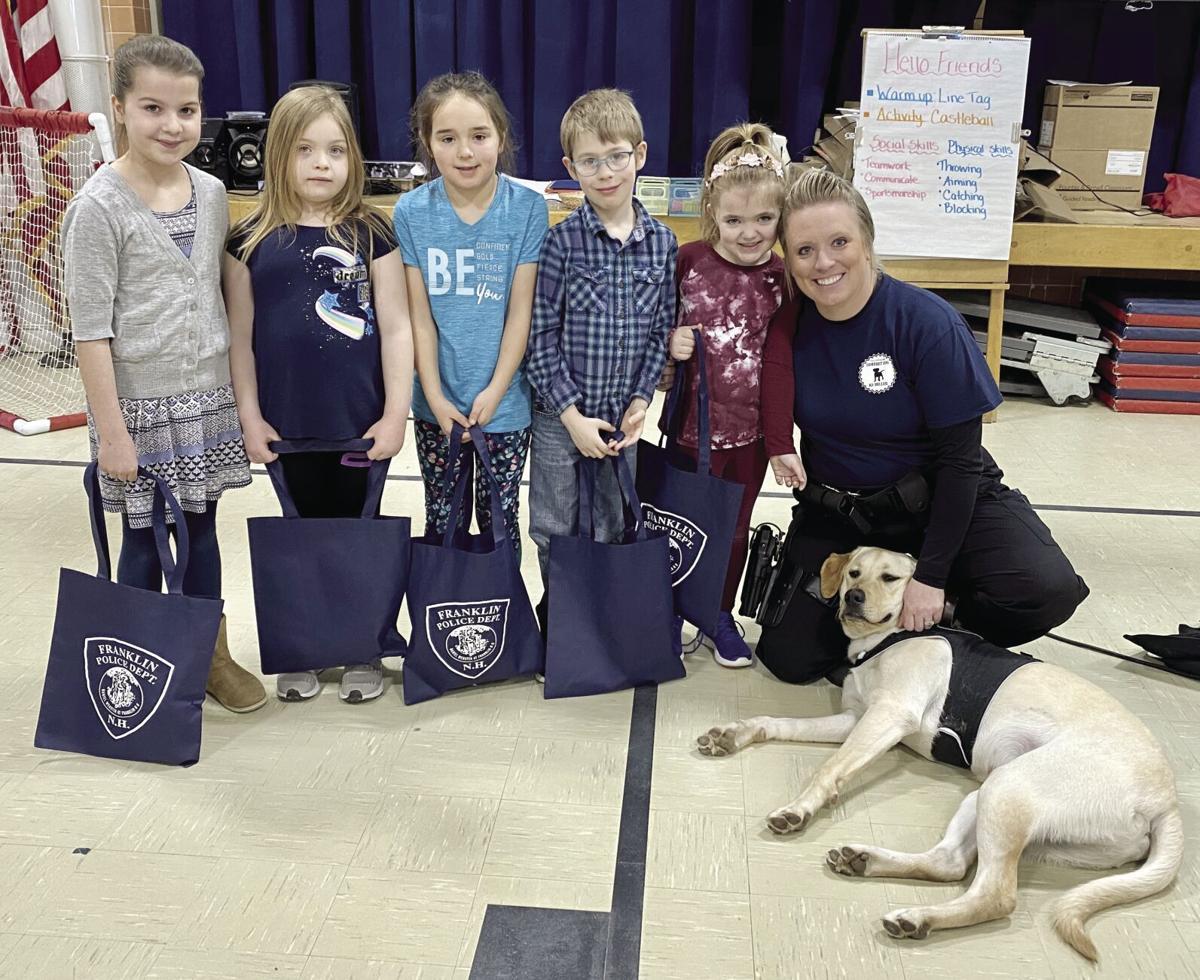 Franklin police Officer Kristin Tracy, right, and her comfort-dog partner, Miller, visit with pupils from the Paul Smith School who were the winners of Miller’s coloring contest. (Courtesy photo) 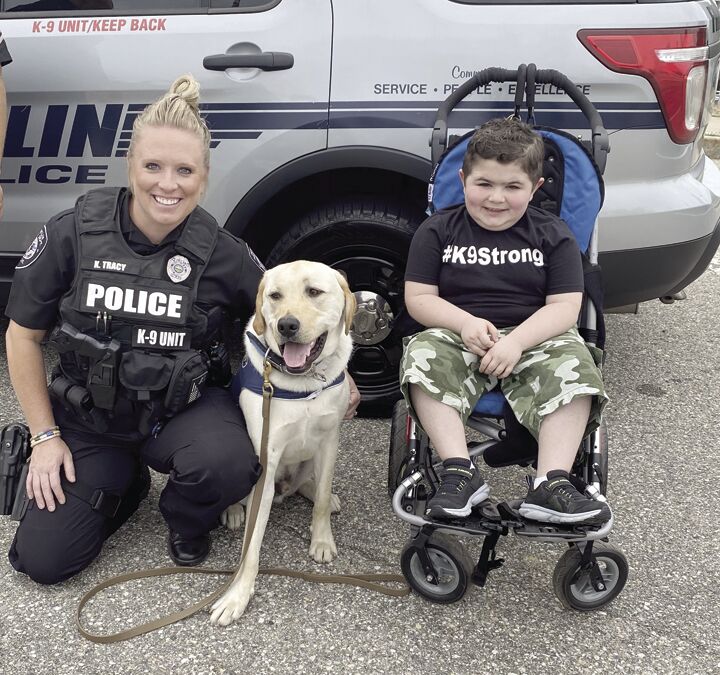 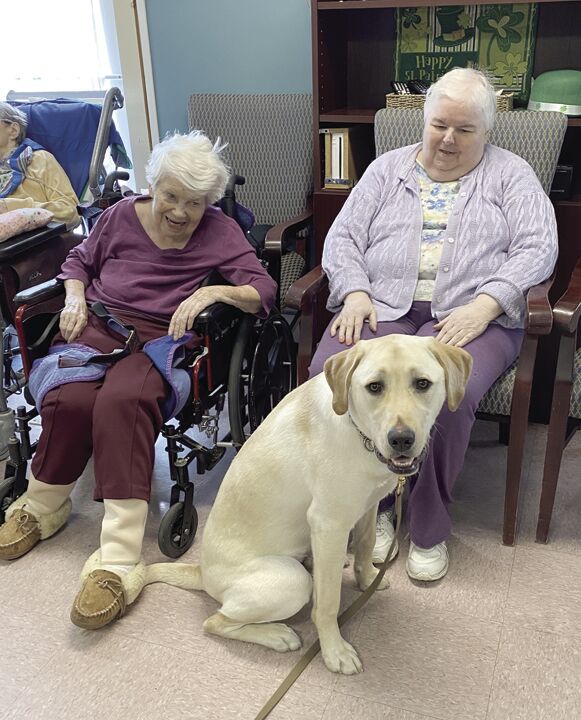 Franklin police Officer Kristin Tracy, right, and her comfort-dog partner, Miller, visit with pupils from the Paul Smith School who were the winners of Miller’s coloring contest. (Courtesy photo)

FRANKLIN — Many couples rehash their days at work. For Kristin and Bryan Tracy, talk often turns to work done by their dogs – what happened where, how their dogs saved lives, how they made the survivor of a suicide attempt smile or an elderly nursing home resident amble to the community room window to see the wagging canine outside.

As ardent dog lovers who use their canine cohorts to accomplish what they can't do alone, the Tracys represent flip sides of a valuable coin: Bryan, a NH state trooper, is partner to Stryker, a 5-year-old Belgian Malinois, a smaller and more agile cousin of the German Shepherd, who works as a patrol dog and narcotics locator. Two years ago, Kristin, a Franklin Police officer, adopted and trained Miller, a 2-year-old Labrador retriever – the state’s second police comfort dog after the first one in Concord. Both Tracys have been honored for their successes. But comfort dogs are filling new niches.

Across the state, comfort-giving, conversation-starting, silence-breaking canines are on the rise, especially as police respond to traumatic incidents involving children and families. In Franklin and elsewhere, COVID’s social and economic fallout caused an uptick in domestic violence and suicide attempts, and comfort dogs like Miller fill a critical role.

“The dogs are like keys. They open a lot of doors,” said Selena Barker, a volunteer at Hero Pups, Inc. in Stratham, which trains service dogs, emotional support animals and comfort dogs for veterans, police and first responders. Hero Pups placed 43 dogs in 2020, compared to 25 in 2019, including at police departments in Manchester, Hudson and Claremont.

Everywhere they have gone, comfort dogs have been therapeutic for police, crime victims, witnesses and schoolchildren who feel anxious, frustrated or out of control.

“We have a lot of domestics and people who need help,”  Kristin Tracy said. “Whether they’re at home or school, this is something to lift them up. You bring a dog in the room and their whole body language changes. They can forget what just happened to them and relax. They want to talk because Miller’s there.”

Tracy and Miller patrol downtown Franklin and visit nursing homes, schools, community events and neighborhoods in New Hampshire’s smallest city. It's a place where social, economic and community health challenges have resulted in police calls per capita that rival Manchester, the state’s largest urban center, and where substance abuse and poverty are common.

Because of visiting schools, “Every kid in Franklin knows Miller,” Tracy said. This translates to greater openness and cooperation and less tension when she responds to calls at homes where children are present, and a young voice calls out, “Officer Tracy, do you have Miller?”

The Franklin Elks Club recently named Tracy and Miller – and Franklin PD Sgt. Joe Guerriero and his patrol K-9 Falco – as Citizens of the Year.

Comfort dogs “have done more overnight for community relationships than any other police initiative in 40 years, more than school resource officers or ‘Officer Friendly,’” said Franklin Police Chief David Goldstein, who keeps a dog bed with a sign, “Miller’s Place,” in his office. “The change in how we deal with the public when we have these dogs with us is incredible.”

For state and municipal agencies with comfort dogs, it’s a new chapter in law enforcement and human relations. They double as on-the-job and in-house therapy dogs, answering answer calls related to substance misuse, mental health crises and domestic violence, and others where a calming presence is useful. Their role includes making lasting connections in police-resistant communities, combating stigma and boosting trust, reducing stress for officers at the station when they return from disturbing events, and breaking the silence of victims and witnesses who are reluctant to talk.

As tempers, anxiety, and depression and suicide risk remain high in the aftermath of COVID, demand for comfort dogs is increasing. Two years ago, there were two working police comfort dogs in New Hampshire – now there are roughly 30 statewide, with about 10 still in training, Tracy said.

“With times being as tough as they are, it’s a gentler approach to police work,” said Peggi Brogan of Boonefield Labradors in Rindge, which has donated 14 trained comfort dogs to the Middlesex County  District Attorney’s office in Massachusetts and to police departments in Vermont, Rhode Island and New Hampshire – as well as a funeral home in Jaffrey, and Hillsborough County (NH) Youth Services.

“It’s been an ice breaker for many departments,” Brogan said. “Dogs by nature have a calming effect.”

Massachusetts State Police use two Boonefield Labs as employee assistance dogs for destressing officers after high-stakes calls, and when they’re being debriefed at the station. “They work the room and sit with the officers who can’t unsee what they’ve seen,” said Brogan. “The mood change is almost instantaneous. When they have shift changes, if they’re out all night or at a bad accident, everybody gets to visit with the dog.”

The dogs’ popularity extends to courthouses, child welfare agencies, funeral parlors and other places where grief or anxiety are far too common.

“We just got a call the other day from a dentist’s office,” Brogan said. “It’s making the police more approachable overall. The more people find out, the more departments want them.”

“Some kids who are just having a tough day will come into my office and say hello to her,” Downey said. “If the kids are upset, she helps de-escalate them.  In years past, those kids might have just walked by. Now kids come up and pet her and say hello to me out of courtesy.”

Haven has her own Instagram and Facebook pages, and a growing fan club on social media.  People in town “love the program and love Haven,” said Downey. The dog, who came from Hero Pups, cost the department $5,000. America Pets in Hudson sponsors her food and grooming, and public donations pay her medical bills, Downey said. “When I’m around town they call out Haven’s name before any of ours. She’s an unbelievable icebreaker if you are trying to reach out to people.”

During COVID, the demand for dogs has ballooned as more Granite Staters are working and watching kids at home. Canines provide comfort, recreation and companionship – and reduce the feeling of being alone and sequestered, including for military veterans suffering from PTSD and individuals with disabling social anxiety or chronic mental illness.

Hero Pups rehabilitates and trains rescued dogs and others donated by breeders, and inquiries from law enforcement have come from as far away as Texas and Oregon. There's a wait list in 2021, said Laura Barker who runs the program.

Eight comfort dogs went to New Hampshire police departments before COVID eliminated their essential training in crowds, including at stadiums, where the dogs learn how to remain steady and calm amidst chaos. “I liken them to a therapy dog on steroids,” said Barker. “The amount of training and environmental exposures is dramatically increased.”

Comfort dogs in the field have been game changers in emergencies. One was able find a four-year-old autistic boy wandering the streets alone, calm him and escort him and his mother to the hospital, Barker said.

In Franklin, Officer Tracy and Miller went to the emergency room to visit a girl who had tried to take her own life by jumping out a second-story window. “She had gone catatonic,” said Goldstein, the police chief. “As soon as Miller walked in, she opened up completely. She remembered him to from her first day of school” when Tracy brought Miller to meet students.

After Franklin police found an elderly African-American veteran who had passed away from natural causes, the department got a call from his family members in Cincinnati, Ohio, who wanted to bring his body home. Goldstein said they hesitated coming to mostly-white New Hampshire because they were afraid they might encounter racism here. Goldstein and Miller met them at the police station to console and reassure them – but Miller was the key influence that made them relax and feel welcome.

The most moving call that Tracy received concerned a case of child neglect. She and Miller removed two malnourished children from a local home who seemed barely aware of their surroundings. The officer and dog accompanied a nine-year-old boy who looked to be five and weighed about 30 pounds to a hospital emergency room, where he was evaluated and ate ravenously. “The little boy said, ‘This was the best day of my life!’ Just playing with a dog, and being given all this food,” said Tracy.

Day-to-day at the station, Miller melts hearts and sour moods. “It makes it a little bit lighter,” Tracy said. Seeing the dog presses the reset button for officers returning from tough situations, which have a cumulative toll on mental health. “Sometimes we’re kind of a staid group of individuals. I see police officers get a little upset if Miller doesn’t pay attention to them. Their first impulse is to reach out and pet him. He’ll lie down and flop on his back and it’s belly-rub time,”  Goldstein said.

“We call him our Goober,” said Tracy. “He’s happy all the time and loves everybody and just wants to be fed treats. If my chief is there, I don’t exist.”

“My wife made him a blanket and it’s all his,” Goldstein said. “Like a good hotel, when I leave for the night, I always leave treats on his pillow. I’m a rabid animal lover. If it’s on four legs, it’s OK with me.”

TILTON — It was a day to celebrate a life saved – and an act of duty, courage and instinct that will live forever for baby Evangeline Noelle F…