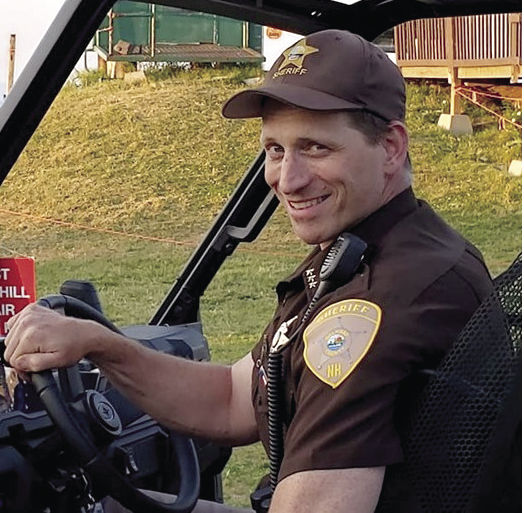 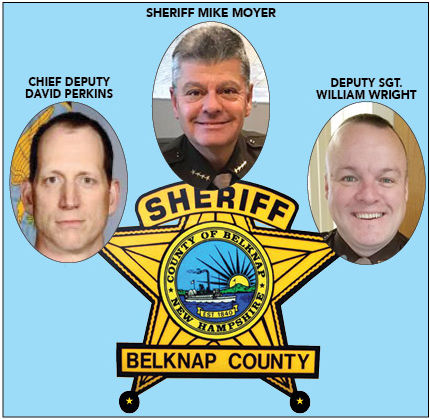 LACONIA – When Belknap County Sheriff’s Chief Deputy David Perkins returned to work in early January after an unpaid five-day suspension, his reinstatement didn’t last long. And, according to a letter from his attorney, text messages Perkins sent to his wife on his county-issued cell phone played a key role in what happened next.

Perkins’ lawyer, Peter D. Anderson of the McLane Middleton law firm, said in a letter that Belknap County Sheriff Mike Moyer informed Perkins on Jan. 13 that the deputy was being investigated a second time, accused of violating several department rules, including:

• and violation of a rule regarding who deputies are permitted to associate with.

Perkins, who has threatened to sue the sheriff and county if he is fired, was placed on paid administrative leave – essentially a suspension with pay – which remains his status at present. He is collecting $1,744.80 a week in taxpayer money while not working and has received about $30,000 since the start of his leave.

While it’s not clear whether Moyer ever investigated questions raised by Perkins last summer about the integrity of the Sheriff’s Drug Task Force, Moyer turned over the first investigation of Perkins to the Strafford County Sheriff’s Department. That inquiry was based on complaints Moyer received about Perkins from Deputy Sgt. William Wright and Tilton Police detective Nate Buffington, the top two members of the Drug Task Force.

Perkins was cleared of charges that he was untruthful and abused his authority, his lawyer said, but served the five-day suspension after investigators upheld the claim that Perkins had been insubordinate and improperly disseminated information about the department.

And who was Perkins alleged to have shared department information with?

According to his attorney, the recipient of that information was Perkins’ wife; moreover, the information came from Perkins’ county-issued cellphone, which he had turned over so investigators could review his messages from Aug. 9 as part of the first inquiry.

But in order to do that, the lawyer said, investigators had to extract all of his text messages, including those of a personal nature.

The Sheriff’s Department rules and regulations don’t address the issue of using county-issued phones for personal business, but Perkins’ lawyer claims it was a widespread department practice at the time.

It soon became apparent that the second investigation launched in January centered around information the sheriff had gleaned from looking at Perkins’ text messages that were extracted during the first investigation, “including his private and personal text messages with his family,” the lawyer wrote. “There was no reason for the Sheriff to review these messages after the Prior Investigation had concluded and the Chief Deputy had served his suspension, and the Sheriff has provided no explanation for doing so.”

Those text messages between Perkins and his wife covered the period from May through October 2019.

Moyer confirmed to The Daily Sun in early March that Perkins was on paid administrative leave and said he expected the internal investigation to be wrapped up “soon.”

During a phone interview later in March, Moyer denied Perkins’ allegation that the sheriff was trying to drive his top deputy out of the department and clear the way for Wright – the man Moyer defeated in the 2016 election – to run for sheriff. Those claims were “lies put out by Dave Perkins and his friends,” Moyer said.

Moyer declined at the time to say who was conducting the second investigation of Perkins, but multiple sources, including Perkins’ lawyer, said the probe was handled by Moyer himself.

As part of the second investigation into Perkins, Moyer interviewed his Chief Deputy on Jan. 24, with Perkins’ attorney present.

“The vast majority of the questions that the sheriff asked pertained to private and privileged text messages” between Perkins and his wife, “where one or both made an unflattering comment about the Sheriff or Sergeant Wright,” Perkins’ lawyer wrote in his letter to the county proposing a settlement.

“At that meeting, we also told the Sheriff that we thought it was improper for him to be conducting the investigation given that he is the subject of the text messages he is relying upon as evidence of the Chief Deputy’s alleged rule violations and therefore he could not possibly be a neutral and unbiased investigator,” the attorney wrote.

Moyer’s response, according to the lawyer, was that it would take too long to bring in an outside agency.

Contacted by email on May 7, Moyer said he was legally prohibited from talking further about the case.

The findings of that second inquiry have not been made public, but attorney Anderson wrote that when he spoke with Moyer without Perkins in the room, the sheriff said he accepted Perkins’ explanations relating to the bribery and gifts charge, and the allegation of improper association, and “he planned to unsustain those.”

On the issue of improperly disseminating information, the attorney said Moyer pointed to Perkins’ use of department software to search for information about someone who was dating a family member; Moyer said that report was confidential and Perkins is alleged to have shared some of its findings with his wife via text message.

The Sheriff’s Department policy on dissemination of information reads, in part: “Deputies and employees shall not discuss operations and official business of the Department which is of a confidential nature with anyone outside of the Department unless given permission to do so by the Sheriff.”

Perkins’ rebuttal was that the information obtained from the search was a matter of public record anyway, and could have been obtained through a Right-to-Know request.

On the issue of insubordination and unbecoming conduct, the attorney said Moyer only cited the text messages between Perkins and his wife as evidence to support that charge.

“The notion that private and confidential text messages between spouses can form the basis for the Insubordination and Unbecoming Conduct charges is absurd,” attorney Anderson wrote. “These messages were exchanged between spouses during a very difficult and stressful time in the Chief Deputy’s career.”

If they were presented as evidence to a judge in court, the lawyer said, the messages would be disallowed because communication between spouses is privileged.

But that privilege is complicated by the fact that Perkins was using a county-issued cell phone, according to Albert (Buzz) Scherr, a professor at the University of New Hampshire Franklin Pierce School of Law.

“There’s no legal rule that says, in any context, what you say to your spouse, that’s privileged,” Scherr said. The spousal communication privilege exists as a rule of evidence, which means it doesn’t exist until the case lands before a judge.

“If there were courtroom litigation about him being suspended, then the question becomes this: could you use his text, his communication to his wife while they were married, against him in that litigation,” Scherr said. “The rules of evidence suggest no.”

But because the county owns the cell phone on which that communication happened, “you open up everything you do on that phone to the county,” Scherr said. “Those are the two competing influences on how that decision would be made.”

Scherr called it “an interesting little conflict” and said, “I would not put money on using the spousal communication privilege.”

When The Daily Sun asked commissioners to release information in their possession regarding the current suspension of Perkins, that request was rejected by county administrator Debra Shackett, who cited an exemption to the Right-to-Know Law that may permit certain personnel issues to be shielded from public view.

The Sun then asked that the request be brought to County Commissioners, since that’s where it was directed.

The board took up the request at a meeting on April 30. Commissioner Hunter Taylor of Alton made a motion in public session to approve the Sun’s request for disclosure. The motion failed to get a second from either of his fellow commissioners, Chairman David DeVoy of Sanbornton and Glen Waring, who represents Barnstead, Belmont, Gilmanton and Tilton.

DeVoy, who chairs the commission, said in a May 19 phone interview that he couldn’t talk about the matter because, “this is a personnel and legal issue we’re trying to resolve.”

Asked if he was comfortable with Perkins being placed on administrative leave for so long, DeVoy said, “The sheriff has operational control of his deputies. You should be asking the sheriff.”

Taylor alone among commissioners said he believes the matter should be discussed publicly, and he recently disclosed that commissioners voted in secret earlier this month to authorize a third investigation.

“I think this thing has set and festered for so long that, to me, it’s very clear that somebody’s got something to hide here. If Perkins did something that’s really wrong, Perkins should have been dealt with appropriately,” he said. “Taxpayers shouldn’t be paying $25,000 for some third investigation that didn’t need to be done.”

That investigation was conducted by attorney Lauren Irwin of the law firm Upton & Hatfield. County administrator Debra Shackett had no comment when asked about the status of the investigation on Thursday, but Taylor said it’s his understanding that the inquiry is finished.

“If it is so open-and-shut that Chief Deputy Perkins did something seriously wrong, it is hard to figure out why all of this has taken so long and required three investigations,” he said Thursday. “Hopefully, I, the other county commissioners and most of all the public will be able to see all three reports and related documents and understand the reason for the lengthy delay, the secrecy and considerable monetary cost involved.”

Commissioners have seen none of the investigations, Taylor said, but with an election for the sheriff’s job coming up in the fall – possibly between Wright and Perkins, who have both expressed an interest in the job – it’s important that voters have all the facts.

“I don’t have a dog in this fight,” he continued. “If the two (Wright and Perkins) run against one another, I want the better candidate to win and I want the public to have the facts and make a decision accordingly. If there’s a smoking gun there,” he said, “let’s see it.”

Roger Carroll can be reached by email at rogercarroll@laconiadailysun.com