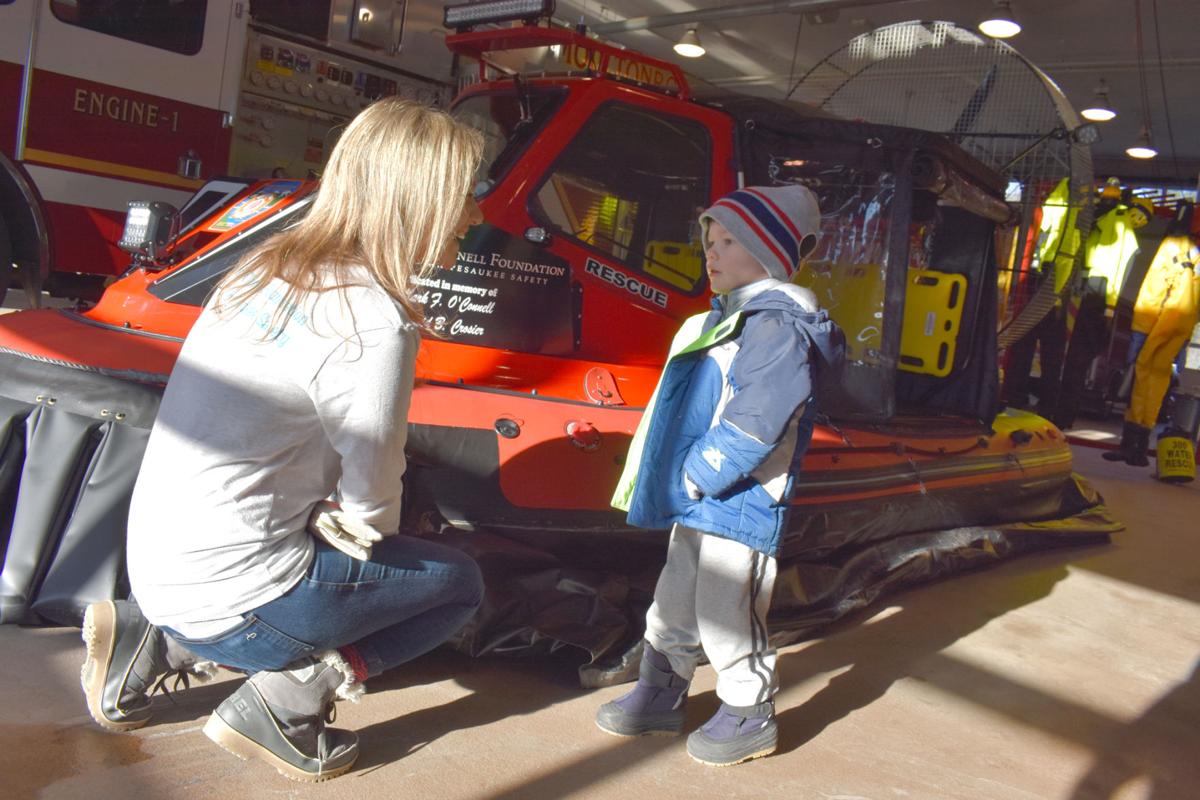 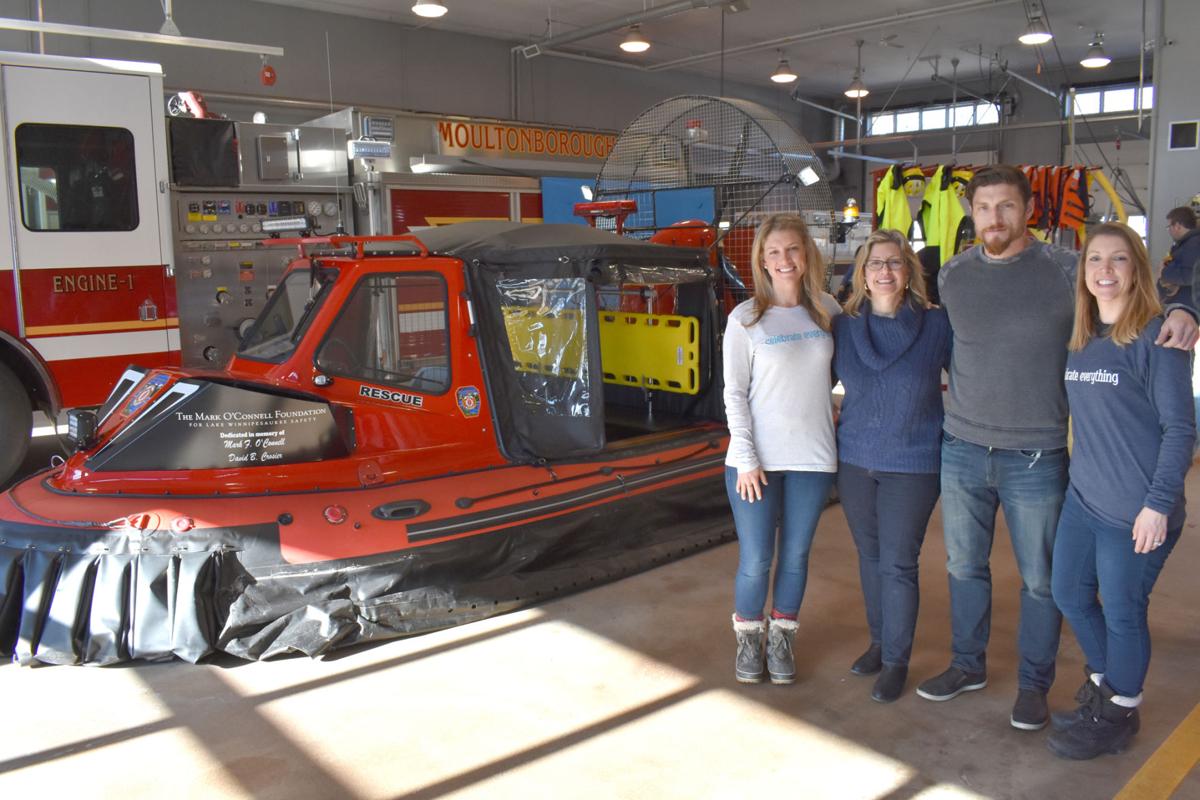 Shannon, Debbie and Brendan O'Connell, and Kara Bouchard, the children and wife of Mark O'Connell, are shown here with the hovercraft that the Mark O'Connell Foundation donated to the Moultonborough Fire Department. Not pictured is Sean O'Connell. (Adam Drapcho/The Laconia Daily Sun)

Shannon, Debbie and Brendan O'Connell, and Kara Bouchard, the children and wife of Mark O'Connell, are shown here with the hovercraft that the Mark O'Connell Foundation donated to the Moultonborough Fire Department. Not pictured is Sean O'Connell. (Adam Drapcho/The Laconia Daily Sun)

MOULTONBOROUGH — Mark O’Connell’s year-round residence was in Massachusetts but – as much as could be said about anyone who vacations in the Lakes Region – Lake Winnipesaukee was his home away from home. When he died two years ago in a snowmobiling accident, his family could have sold the lakeside home and walked away. Instead, they doubled down on their commitment to the region.

On Saturday, Feb. 9, the Mark O’Connell Foundation for Lake Winnipesaukee Safety presented the Moultonborough Fire Department with a rescue hovercraft, a piece of equipment that might have made a difference on Feb. 11, 2017, one of the deadliest days on Lake Winnipesaukee in recent memory.

That day fell during the weekend of the 38th Great Meredith Rotary Fishing Derby. The weather was odd leading up to the weekend of the ice-fishing derby, which draws thousands of visitors. Some come to compete for cash prizes, others just come to take in the carnival-like atmosphere. Locals knew there were hazards on the lake. It had been unseasonably warm during the week, nearly 50 degrees just a few days before the derby, and some areas of ice had turned to open water. Then the weather returned to normal, and thin ice formed over those areas just before a few inches of snow fell.

By derby time, temperatures were in the single digits and those who arrived for the weekend saw what looked like a classic mid-winter Winnipesaukee. It was anything but. The bays of the lake had plenty of ice, but in other areas of the lake the freshly-fallen snow hid the fact that the ice beneath was just an inch or two thick.

O’Connell, celebrating his 62nd birthday, came up to his vacation home on Long Island along with two friends, David Crosier and Steven Weiss, all from Westboro, Massachusetts. They headed out for a snowmobile ride on the morning of Feb. 11, and about an hour later, all three men and their machines had fallen through the ice. Weiss, who made a split-second decision to turn toward shore and open the throttle, was able to wade to shore and spent the next 40 minutes trying to find an occupied home to call for help. Both Crosier and O’Connell died before help could reach them.

Later that day, in the Broads, two other snowmobiles crashed through the ice. Rescuers were able to save Arnaud Remy, from Mamaroneck, New York, but his 15-year-old son Arthur died.

In both incidents, rescuers had to wait precious minutes for the only airboat on the lake, stationed in Tuftonboro, to arrive on scene to safely approach the victims.

Standing in front of dozens of people in the Moultonborough Fire Department garage – with a brand-new hovercraft parked behind her – Shannon O’Connell, one of Mark’s four children, said her family felt supported by their home communities – both in Westboro, and Lake Winnipesaukee.

“My dad loved this lake,” Shannon said. In the wake of his death, she felt that love returned to them, especially when the family formed the Mark O’Connell Foundation and began to raise money. After a year and a half of fundraising, they had collected $70,000, enough to purchase a hovercraft manufactured by the Ontario, Canada-based Air Rider.

“We are blown away by how much support this community has shown us these past two years. Friends, family and complete strangers came together to make our goal a reality,” Shannon said.

“The hovercraft was put into our capital improvement plan before this tragedy occurred,” Bengtson said. “We identified a need for something like this.”

Bengtson suggested to the Mark O’Connell Foundation the specific model that they purchased. He said he liked the fact that the machine is designed and built by a company in Canada, which gives him confidence that it will operate in winter conditions.

The hovercraft can hold 1,000 pounds, Bengtson said, and when it is operating it floats on a 16-inch cushion of air. It can achieve high speeds on open water or smooth ice, he said, but will normally be piloted at moderate speeds due to its limited ability to steer or stop.

In addition to making rescues, the hovercraft will provide the department with the ability to surveil ice conditions and issue reports or warnings in advance of events such as the fishing derby.

“Today will be remembered (as the day) that the Mark O’Connell Foundation for Lake Winnipesaukee Safety made the lake a safer place,” Bengtson said.

For those who grieve O’Connell, the gift of the hovercraft brought mixed emotion.

Barbara O’Connell, Mark’s mother, who lives in Enfield, Connecticut, said she thought she would be more emotional during the ceremony.

“I’m really buoyed up by the response of all the people in Moultonborough, and the work of all the girls and boys (who created the foundation) especially,” Barbara said. She said it has brought “a lot of comfort to the family” to know that there is now a greater ability to respond to emergencies on thin ice.

“We know in our hearts that Mark could have been rescued if there had been such a boat,” she said. “It’s been the worst tragedy in our lives.”

Debbie O’Connell, Mark’s wife, said that Saturday was a “happy-sad day.” She said having a goal to work toward gave her family a way to move forward despite their grief. “There’s so much that needs to be improved, the lake is a big lake. We just don’t want this to happen again. I’m proud of my family for accomplishing this in two years.”

Shannon said that she and her family are currently in talks with other departments and agencies to identify what their next fundraising project will be.

“When you have tragedy, you feel powerless. In some way, this is my family taking back some power,” Shannon said.