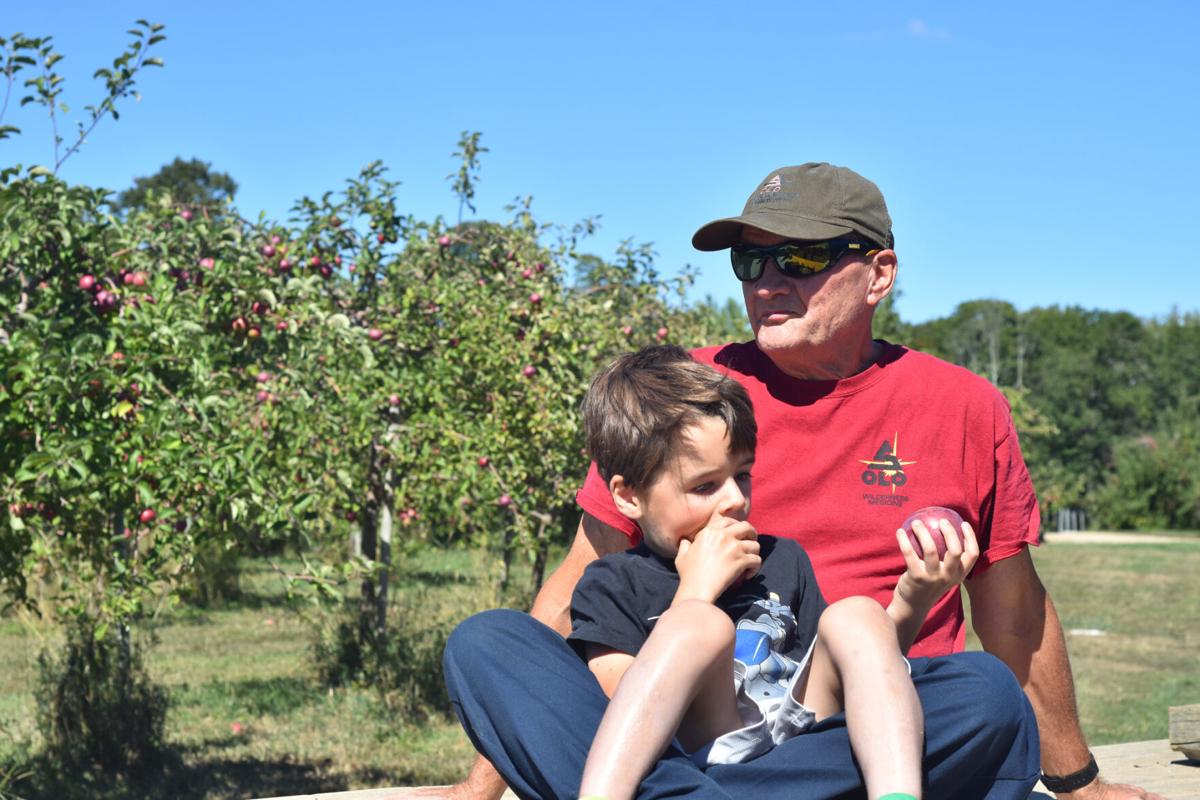 Otis Drapcho and his grandfather, David Drapcho, sit in a trailer as a tractor pulls them back to the farm stand at Smith Orchard in Belmont on Sept. 12. 2020 has been a good year for local apple orchards. (Adam Drapcho/The Laconia Daily Sun photo) 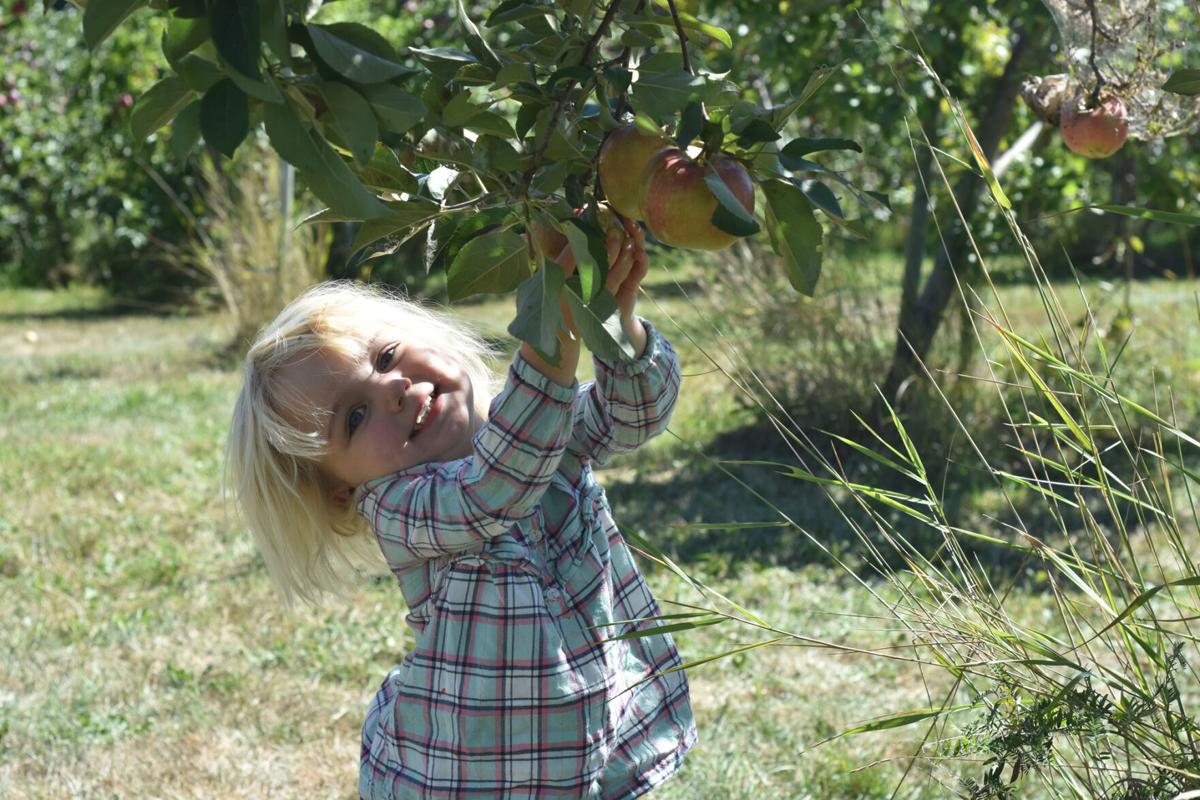 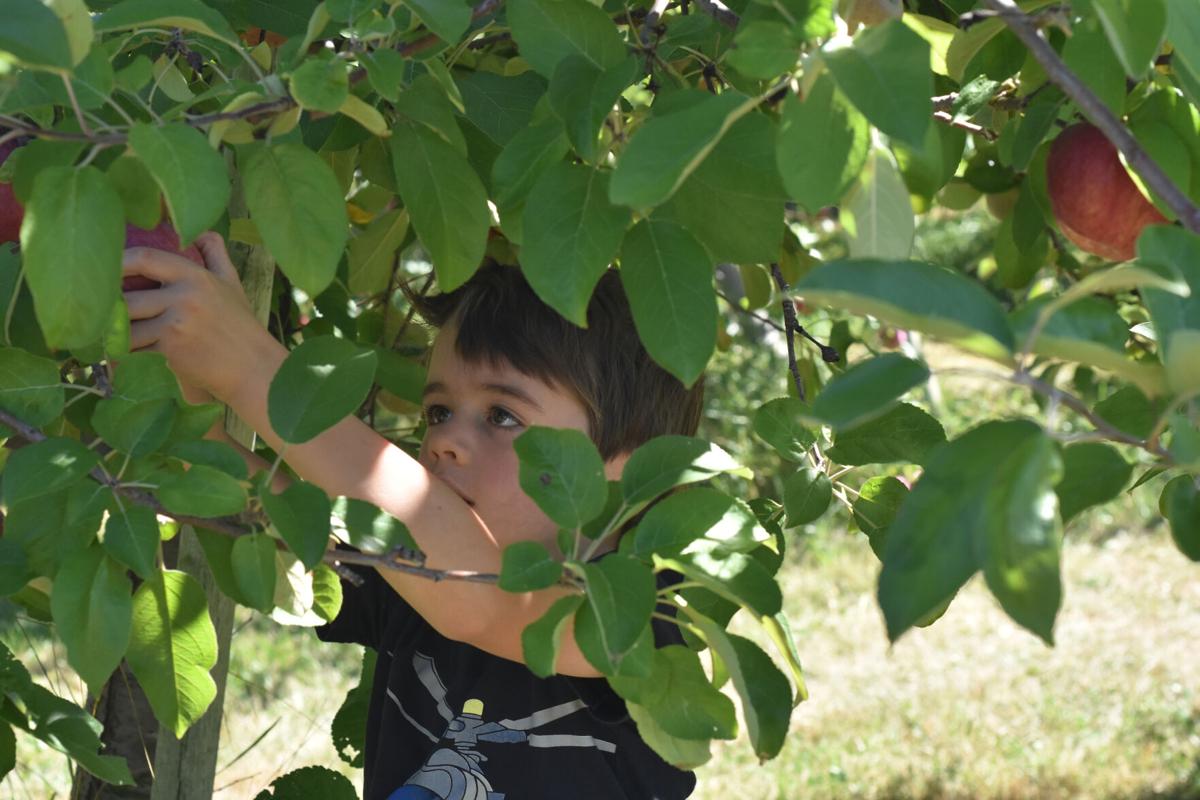 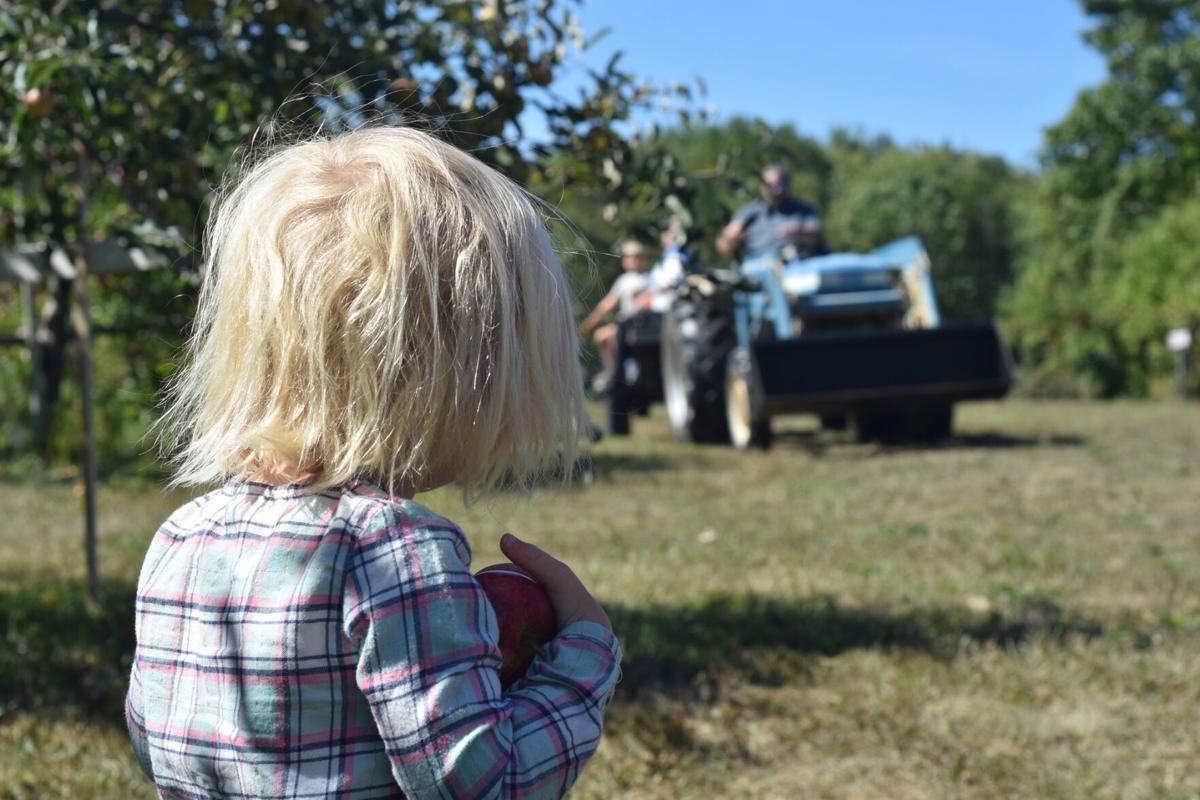 Otis Drapcho and his grandfather, David Drapcho, sit in a trailer as a tractor pulls them back to the farm stand at Smith Orchard in Belmont on Sept. 12. 2020 has been a good year for local apple orchards. (Adam Drapcho/The Laconia Daily Sun photo)

With country fairs canceled and limited attendance at most social events, pick-your-own orchards have been seeing a bumper crop of visitors this year.

George Hamilton, field specialist for the UNH Cooperative Extension, said orchards are benefiting from two pandemic side effects: other traditional autumn activities are canceled or seen as risky; and consumers are more interested in local agriculture.

“What I’m hearing from pick-your-own (growers) is that the past two weeks have been fantastic. People have been coming out of the woodwork to pick,” Hamilton said, adding that it’s been a continuation of what he’s seen all year. “There’s been great demand for local product, fruit and vegetables.”

The sun has been shining on farmers this year. A little too much, actually, as the summer ended in drought. That’s led to increased production costs for orchardists, Hamilton said, as they’ve had to irrigate their trees to make up for a lack of rain.

It’s been an average year in terms of yield, according to Hamilton, which has been good enough for an industry that has pivoted from a wholesale model to direct-to-consumer.

“There is enough for the normal demand. If they plant more fruit and have a bumper crop they’ll have too much fruit,” Hamilton said. “We like to have enough fruit to go into Columbus Day weekend.”

In prior generations, wholesale apple growing was big business in the Northeast. That changed with the rise of other growing regions and the globalization of the apple product market – growing conditions are more favorable in the Pacific Northwest, for example. Rather than try to compete on the global wholesale market, New England farmers leveraged their advantage.

“Our competitive advantage is, we have the public here,” Hamilton said, explaining why there are so many pick-your-own orchards in New England. It also explains why New Hampshire’s apple orchards shrank from 4,500 acres to about 1,300 over the past 30 years.

“We are basically a quarter of what it was, and it’s because of the loss of the wholesale industry,” Hamilton said. Wholesale growers are going for maximum yield, which they send to a processing facility. If that facility closes and moves to Washington, though, that apple grower is faced with a new set of rules: grow just enough apples to satisfy your local consumers, and focus more on quality and appearance than quantity. Apple pickers are picky people, it turns out.

“You have to produce what your customer is demanding in order to stay current in the industry,” Hamilton said. Apple pickers expect a well-kept orchard with lots of picture-perfect fruit. The challenge for growers is to anticipate what kind of fruit they’re looking for.

“The tastes of the younger generation have changed from the older generations,” Hamilton said.

Joe Rolfe, along with his wife, Cindy, operates Stone Mountain Farm in Belmont. His is a modern, high-density orchard. The trees at Rolfe’s orchard are grafted onto dwarf root stock and are grown on trellises so that the trees’ branches don’t have to bear the weight of the fruit. With this strategy, they’re able to fit 8,000 trees on about eight acres of land.

Rolfe said they’ve planted more than 40 varieties of apple trees, from traditional favorites to varieties that most people have never tasted.

“I think the millennial crowd, they just want more variety. They want more choices. We see a family come in, say, a family of six, they all want a different apple. As a grower, that tells you what direction you need to go in,” Rolfe said.

Hamilton said that older consumers tend to seek well-known apples, such as McIntosh, Cortland and Baldwin, so that their sauce, pies and cider would taste the same as they always did. Younger pickers aren’t as interested in their grandparents’ apples, though. They prefer the snappy texture and sweet-tart flavor of newer varieties such as Honeycrisp, which was developed by the University of Minnesota and released to commercial growers in 1991.

If Rolfe’s orchard is modern, Wende Richter’s is the opposite. Smith Orchard, also in Belmont, is traditional, and its generous, grassy aisles between fruit-laden trees have been a haven this year for families looking for a familiar fall outing.

“Our season has been fabulous,” Richter said. I’ve got a safe space out here, it’s wide open, traditional country orchard. People come and spend the day, bring picnics and their kids… I had a beautiful crop and it’s been a good year.”

Smith Orchard’s landscape hosts traditional varieties, Macs and Cortlands. “I think the old people, that’s what they’re used to,” Richter said. She can’t forsake the future for the past, though. She has Honeycrisps, too, and she has open space reserved for whatever can knock that variety off the top of the heap.

“The younger generation, they’re into trying something new and different,” Richter said. “There isn’t anything on the market that’s taken off like Honeycrisps did.”

“My favorite way is to buy local apples so you know where they’re from. There’s nothing like eating a fresh apple right off the tree, and it’s a beautiful time to be out there. But, in a couple of months, when the weather gets colder, there’s nothing like a warm apple pie or apple crisp. That really hits the spot,” Hamilton said. Making that bite taste even better is the thought that he’s helped preserve that experience for future generations of apple pickers, whatever apple they might be pursuing.

“If we want to have local products, we have to support our local farms,” Hamilton said.

Skiers won’t be able to ride the chair lift with strangers, state says

CONCORD — Final guidance released by the state Friday for operation of ski areas recommends against seating strangers together on chair lifts.