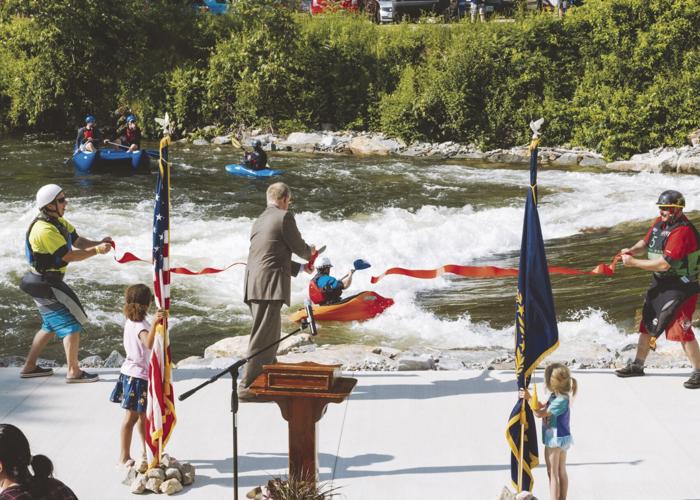 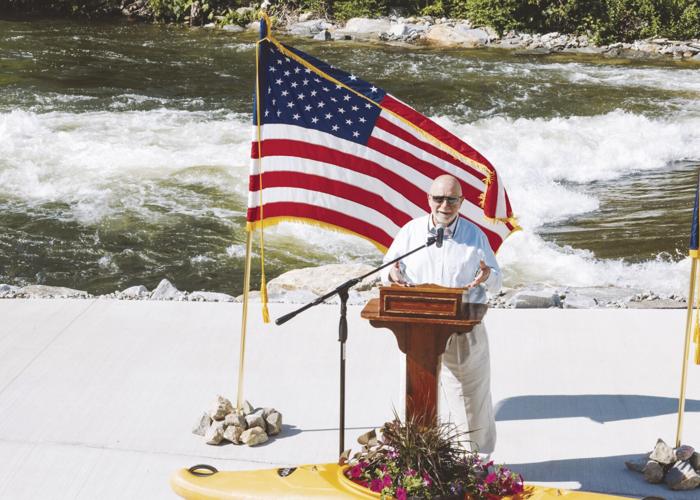 Robert Grevior offers comments about donating the land which is now the center of Mill City Park in Franklin during the ribbon cutting ceremony on June 17. (Alan MacRae photo/for The Laconia Daily Sun) 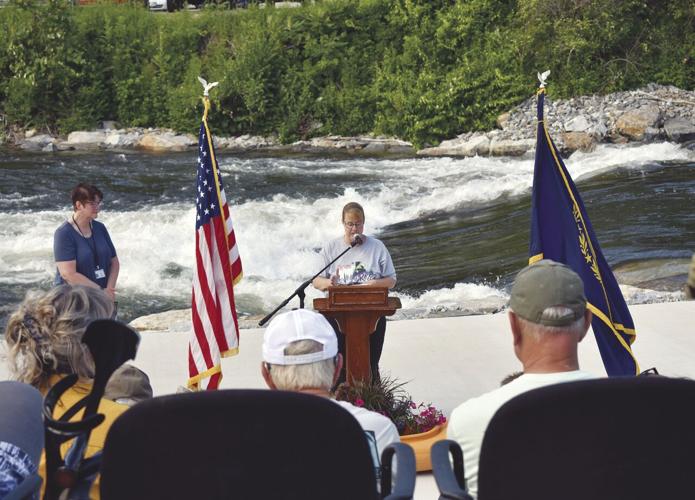 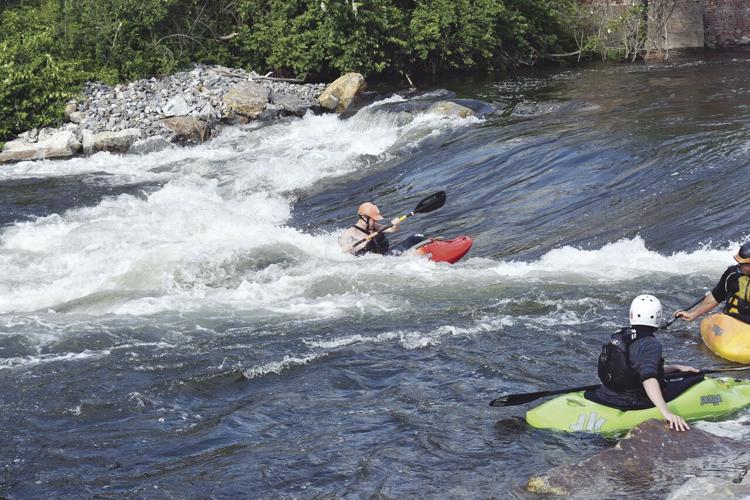 Robert Grevior offers comments about donating the land which is now the center of Mill City Park in Franklin during the ribbon cutting ceremony on June 17. (Alan MacRae photo/for The Laconia Daily Sun)

FRANKLIN — Six years of work at transforming the Three Rivers City from a former mill town to that of a modern micro-urban community reached its goal on June 17 with the ribbon-cutting ceremony for Mill City Park’s first river feature — a stationary wave that allows kayakers to hone their skills while remaining in one spot — and an amphitheater for spectators to watch the river activities.

The event celebrating the first whitewater park in New England kicked off the city’s annual Winni River Days, running June 17-19 this year and drawing 1,740 adults, as measured by over-21 wristbands that provided access to the beer from Kettlehead and Vulgar brewing companies. Many attendees, including children, came to downtown Franklin to enjoy the river, live music, and the items offered by other vendors lining Central Street.

Mayor Jo Brown gave credit to her predecessor, Tony Giunta, for helping to secure some of the commercial support that made the project possible, and she issued a proclamation naming the third weekend in June as Winni River Days so “all will come to enjoy our beautiful river and park, and to realize that dreams can come true. You just have to believe.”

When Kuster spoke, she said, “My husband was teasing me and said, ‘How many ribbon-cuttings are you gonna do in Franklin?’ And I said, ‘I’m going to go every year as they keep building Mill City Park.’ This is just amazing.”

The newly dedicated kayak wave is the first stage of a three-phase plan to engineer features into the bottom of the Winnipesaukee River as it cascades from Cross Mill Bridge to downtown Franklin. On-shore work has been taking place for many years.

Prior to any discussion of Mill City Park, there was the Winnipesaukee River Trail, running from Franklin to Northfield, with plans calling for it to eventually connect with the multi-use trail between Tilton and Belmont, where it turns into the Winnisquam-Opechee-Winnipesaukee (WOW) Trail going through Laconia.

When work began on Mill City Park, land across the river was purchased for a parking lot and path leading to the eastern side of the Winnipesaukee River. A community garden was created beneath the old railroad trestle that spans the river, and eventually there will be a pavilion and camping area. Plans also call for the trails on both sides of the river to be connected with a pedestrian walkway.

When completed, the park will consist of 13 acres with an adjacent 21 acres of preserved land, and three whitewater features. A groundbreaking ceremony for the first feature took place on July 12, 2021, and work was completed in December of that year. The amphitheater, dedicated to Franklin Savings Bank, is an integral part of that project.

Ron Magoon, FSB’s president, said the bank had an opportunity to begin participating in the “vision” for the city when Todd Workman arrived in Franklin with his “permaculture” approach to the city’s revitalization. His PermaCity Life venture led to creative adaptation of the city’s buildings to attract new businesses and investment.

“Shortly thereafter, Marty [Parichand] started with Mill City Park, and we realized we had something special happening,” Magoon said. “Not that there haven’t been a number of attempts to revitalize Franklin, because there have been, but the thing that changed… was that everyone got on board… And I’ll be honest with you, that’s why we were so successful.”

Inspiration for Mill City Park came from Salida, Colorado. That community — which, like Franklin, had been languishing since its railroad economy collapsed — came together to create a whitewater park along 1,200 feet of its waterway on the Arkansas River. Salida experienced an economic renaissance built around the riverfront activities.

Parichand saw the same opportunity in Franklin which already was a destination for kayakers attracted to the Class IV rapids in the Winnipesaukee River. The section of river between the Cross Mill bridge in Northfield and Franklin’s railroad trestle descends an average of 77 feet per mile, making it ideal for whitewater kayaking. Debris from the crumbling mills made the river dangerous, however. Cleaning up that debris and placing artificial structures that would create permanent waves required government permission.

Support from the state’s congressional delegation was important in obtaining the permits and federal funding that made the project possible. In addition to Kuster, representatives of senators Jeanne Shaheen and Maggie Hassan came with messages of congratulations.

Cailee Griffin, special assistant to Shaheen, read a letter in which the senator said the park represents “a new era of sustainable and innovative development.”

Ben Belanger read Hassan’s letter in which she said, “this project will strengthen the economic vitality of Franklin and the region as a whole, and will also highlight the natural beauty of this region while allowing for conservation and preservation efforts.”

In his remarks, Bob Grevior said, “The first thing I want to say is I thank my wife for giving up her waterfront property for nothing.” He quoted his father as telling him, “If you’re gonna do something, do it while you’re alive.”

Jeremy Laucks, owner of Blackfly Canoes in New Hampton and president of the Mill City Park Board of Directors, introduced some of the people whose financial assistance made the project possible.

Katy Easterly Martey, executive director of the Community Development Finance Authority, recalled first touring Franklin with the mayor 10 years ago when the Twin Rivers Intergenerational Program Center was to be moved from downtown Franklin to the former Bessie Rowell Elementary School. “And I really saw how this community cared,” she said. “We’ve learned so much about what it takes to build and rebuild these communities by participating.”

Eric Feldbaum, community recreation specialist with the Division of Parks & Recreation, NH Department of Natural and Cultural Resources, cited some of the financial numbers involved. He said about $2.5 million has come into New Hampshire for local and state development projects, with $735,000 coming in the last six years to purchase land and develop the plans.

“I don’t think there’s a better project in this state that truly links recreation to redevelopment,” he said.

Don Berry, president of the Lakes Region Conservation Trust, offered his congratulations and said he looks forward to enjoying it in the years ahead.

The whitewater park has received five federal grants, totaling more than $1.7 million; a $250,000 matching grant from Franklin Savings Bank; and donations by the Tim Horne Foundation, Gilbert Block, Capital Region Development Corporation, and the Franklin Business & Industrial Development Corporation. Watts Water Resources and the Grappone Automotive were among the businesses buying tax credits in support of the project.

Since it is impossible to purchase the same number of hot dogs and buns, what do you do? Do you get more buns or more dogs? And what do you do with the extra? Click the image below to answer