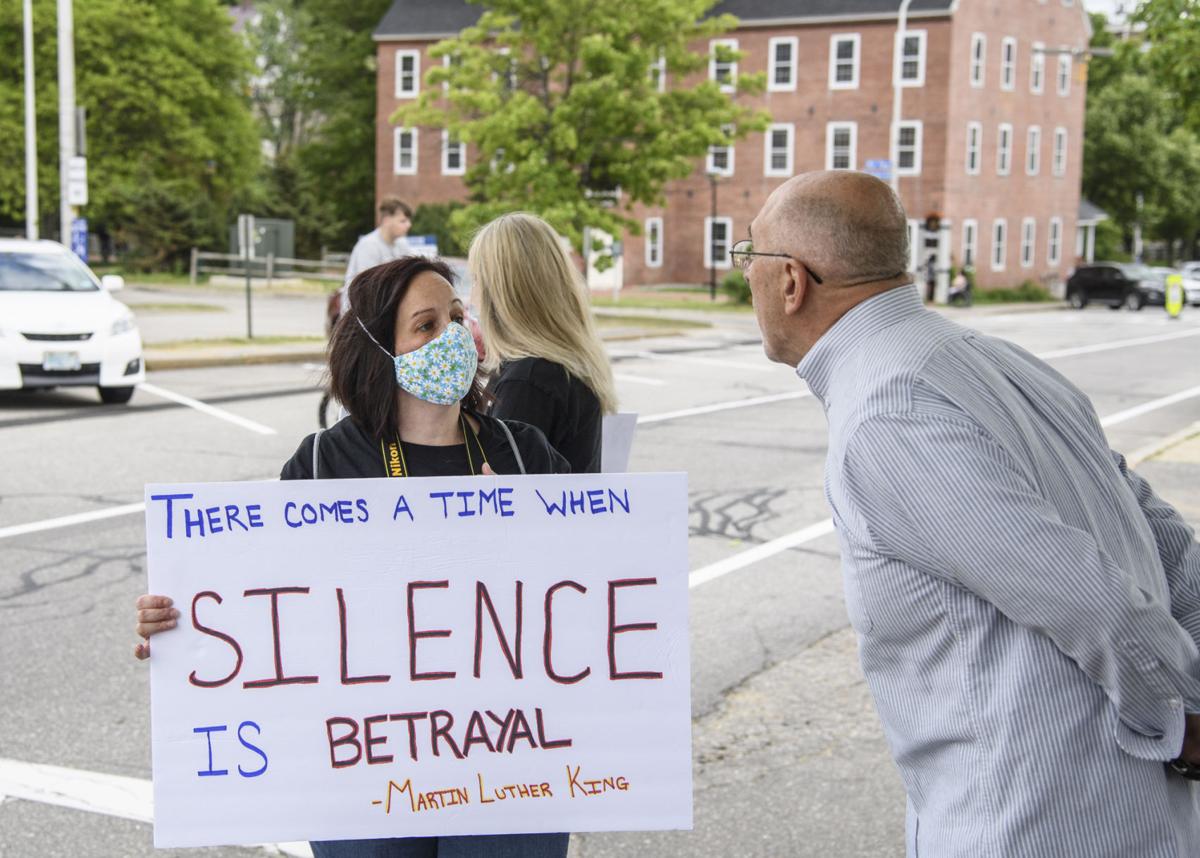 Angie Carignan of Laconia and Alan Gagne of Hampstead engage in a heated discourse prior to the start of the Black Lives Matter protest in Laconia on Sunday. (Alan MacRae photo/for The Laconia Daily Sun) 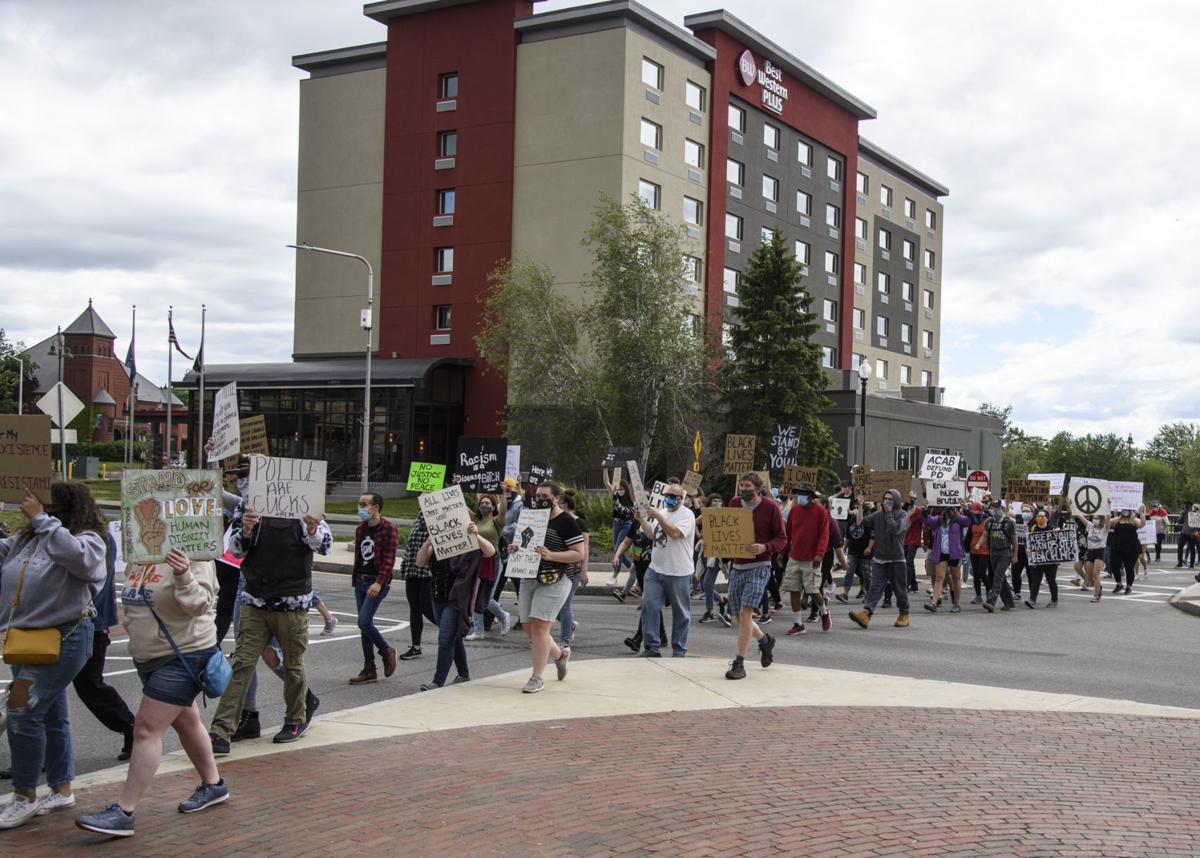 A sizable group of demonstrators march from Beacon Street West around the end of the Laconia mall, onto Beacon Street East to Rotary Park during the Black Lives Matter protest in Laconia on Sunday June 7, 2020.(Alan MacRae for the Laconia Daily Sun) 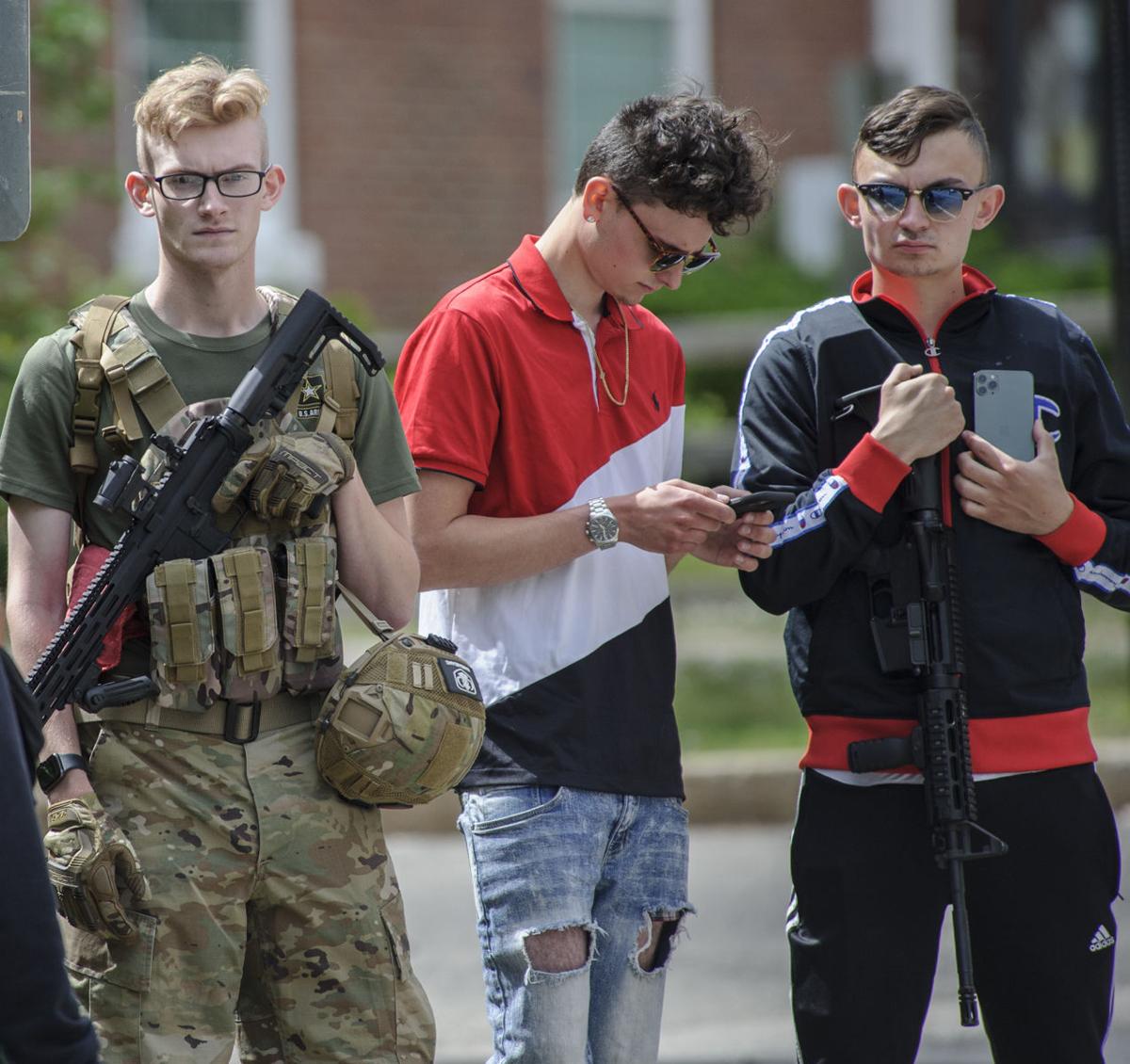 Armed men were among those who watched the Black Lives Matter protest in Laconia on Sunday. Police said they received several calls from people voicing concern about the presence of people with weapons. There were no incidents. (Alan MacRae photo/for The Laconia Daily Sun) 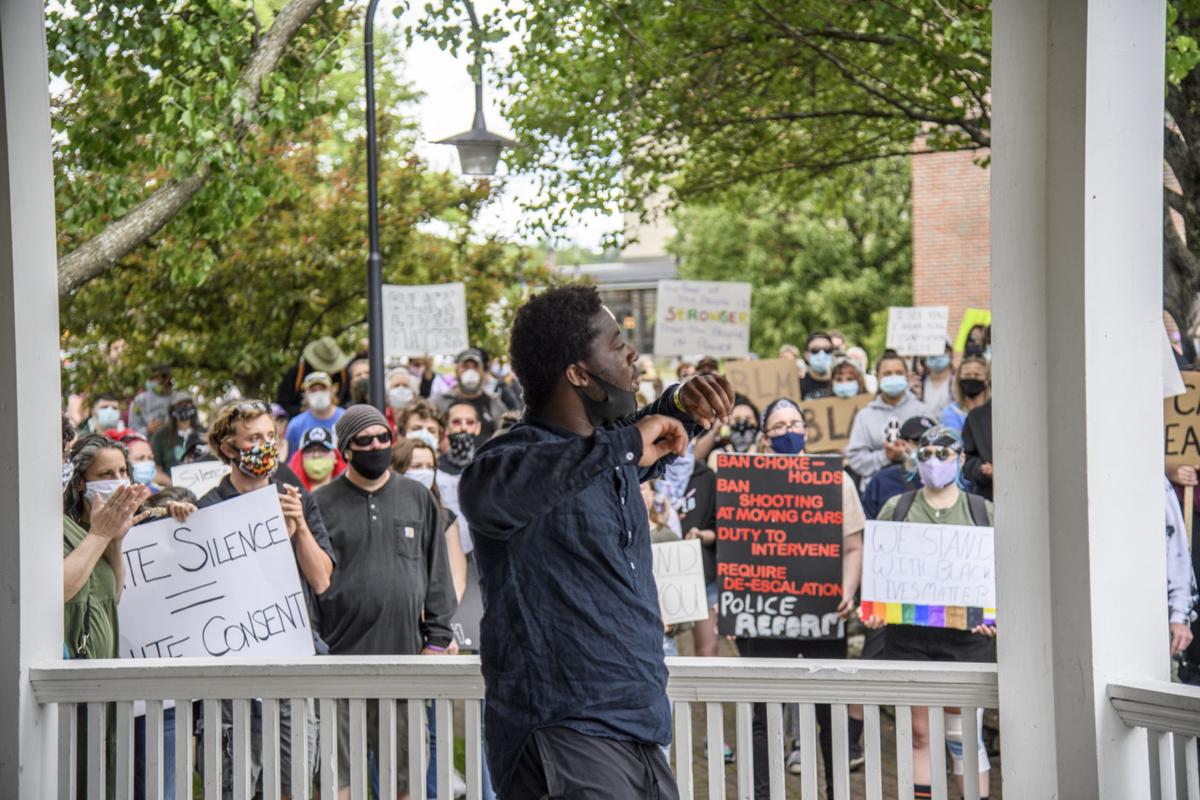 Angie Carignan of Laconia and Alan Gagne of Hampstead engage in a heated discourse prior to the start of the Black Lives Matter protest in Laconia on Sunday. (Alan MacRae photo/for The Laconia Daily Sun)

A sizable group of demonstrators march from Beacon Street West around the end of the Laconia mall, onto Beacon Street East to Rotary Park during the Black Lives Matter protest in Laconia on Sunday June 7, 2020.(Alan MacRae for the Laconia Daily Sun)

Armed men were among those who watched the Black Lives Matter protest in Laconia on Sunday. Police said they received several calls from people voicing concern about the presence of people with weapons. There were no incidents. (Alan MacRae photo/for The Laconia Daily Sun)

LACONIA — About 300 people chanting “No Justice, No Peace,” “Black Lives Matter” and other slogans marched through downtown Laconia Sunday in a peaceful demonstration to protest systemic racism and police brutality.

The crowd, which included many teenagers and millennials, turned out for the two-hour demonstration in a show of solidarity with groups that have protested in other parts of the country and overseas in the wake of the death of George Floyd, who died while in police custody.

“It’s the best way for the community to come together,” said Elizabeth Flynn of Belmont, one of the demonstrators. “It’s a way of supporting people around the country, but also supporting one another. I hope this demonstration amplifies the message.”

There was no violence, as some had feared because earlier demonstrations in some places, including Manchester, had turned disorderly.

Police made no arrests, Police Chief Matt Canfield said. Police kept a low profile during the demonstration, but on Monday the chief reiterated a statement he made late last week that police had contingency plans in place to respond if things had turned ugly. He declined to describe what those plans were.

There were, however, a few instances when those who opposed the protesters’ positions got into arguments with some of the demonstrators.

Floyd died two weeks ago after a Minneapolis police officer knelt on Floyd’s neck for up to nine minutes, ignoring the man’s cries of “I can’t breathe.“

The demonstrators, most wearing face masks, assembled in the parking lot in front of City Hall before marching along the ring roads which encircle the city’s downtown area before gathering in Rotary Park to hear speeches.

Canfield estimated the number of demonstrators as between 250 and 300.

While the event which spurred Sunday’s demonstration occurred 1,400 miles away, one of the speakers told the crowd that racism exists even in Laconia, though it is less pervasive or overt than in other places.

“Even in elementary school I’ve experienced racism. It needs to be brought to light,” said Cheikh Kamara, who was born in African nation of Senegal, but immigrated to Laconia 20 years ago, when he was 1 year old. He now lives in Manchester. “All lives matter,” he continued, “but that’s when we’re all together and equal.”

The rally was organized by Nezir Alic, who attended school with Kamara.

Alic, now a college student, noted that many demonstrators were his contemporaries.

“Younger people (are) the ones who are most outspoken on these issues,” he said moments before the crowd marched up Beacon Street East and through Veterans Square and then down Beacon Street West and into nearby Rotary Park.

But there were older demonstrators as well.

“This is a small part of the silent majority that won’t be silent anymore,” said Roger Andrews of Gilford, a retired Army combat engineer who was holding a homemade sign that read “Veterans for Black Lives Matter.”

Asked whether there was anything in particular that prompted him to take part in the rally, Andrews said, “My black comrades (when I was in Vietnam) were the ones I could always depend on.”

A small gathering of men wearing motorcycle jackets with emblems for Combat Warriors of New England and Patriot Syndicate Riding Club stood silently close to the veterans monuments in Veterans Square as the demonstrators marched past.

“We were not there to interfere or to take away from the protest but to (ensure) that the veterans memorials were not vandalized,” read a post on the riding club’s Facebook page.

Among the motorcyclists were Ron Egalka of Gilford, from the Combat Warriors Motorcycle Club.

“We feel it's kind of our duty to protect this. Not against the protest. We all signed a document a long time ago to protect the Constitution and everybody's right to free speech and to protest, but that doesn't include the violence, clearly, if it happens to occur in and around a veteran organization.”

Other individuals, who Canfield called “self-styled militia,” walked around downtown carrying what police said were assault weapons, though they kept their distance from the marchers.

Canfield said Monday police received numerous calls from people who were driving through the downtown at the time to report their concerns that such weapons were being displayed.

Patrick Williams of Barnstead was part of an armed group standing outside Artful Things on Main Street. He said they were there “just to defend the businesses in case anything gets hairy.”

He said he didn’t belong to any particular organization, but was one of about a dozen young men carrying similar weapons.

“If it comes down to it, yes, we'll stand our ground,” Williams said when asked if he would shoot someone. “As we've seen with a lot of protests across the nation they've been defacing memorials that they believe are racist.”

Another armed young man, who said his first name was Trey and declined to give his last name, said he was from Gilmanton and didn’t have a problem with the demonstrators, so long as the gathering stayed peaceful. “I understand peacefully protesting and everything, but I don't believe in destroying buildings and attacking police officers who are trying to arrest people.”

“I agree with the basic premise of the protesters, not the rioters,” Williams said.

Carlos Cardona, chairman of the Laconia Democratic Party, told demonstrators they need to translate their zeal into political commitment.

“We can change our city. We can have better leadership. But you have to register to vote,” he said.

Pat Wood, of Laconia, a retired attorney, noted that he was the only non-person of color to speak.

“I’m white and I’m privileged,” he said before reading a lengthy excerpt from Martin Luther King’s “Letter from Birmingham Jail.” Wood also urged the crowd to support a petition demanding to change the names of Army bases currently named for Confederate military figures.

Not all of those who turned out were sympathetic with the protesters’ views.

Alan Gagne and Angie Carignan stood almost toe-to-toe in the shade of a tree across from Laconia City Hall on Sunday, clearly not seeing eye-to-eye.

Carignan, a demonstrator, carried a sign that said, “There comes a time when silence is betrayal” as she made her way to see a friend when she stopped for a photographer.

“And that’s where it started,” Carignan said by email Monday morning.

The “it” she was referring to was a heated dispute between the pair during the otherwise peaceful demonstration.

A sticking point appeared to be whether there is such a thing as white privilege.

Gagne was skeptical. He said he witnessed black privilege when he was in the military and saw less-qualified blacks promoted ahead of him.

Carignan explained that racial discrimination is real and her biracial son — who is now in high school — was subjected to the N-word when he was in school.

The two went on for about a minute longer before an exasperated Carignan walked away to join more like-minded people.

Gagne, who grew up in Laconia and now lives in Hampstead, said in an interview that, “I'm here in case Antifa shows up.”

He said his mother and sisters and brother still live locally, “and I’m here to protect them.”

“Police brutality happens, but it happens to all people,” he said. And while he considered the way Floyd died to be wrong, he objected to protesters turning Floyd, who had a criminal record, into a tragic hero.

Demonstrators brought signs with the message they wanted to share but listened as speakers explained their personal experiences dealing with racism.

Rally was a roving billboard