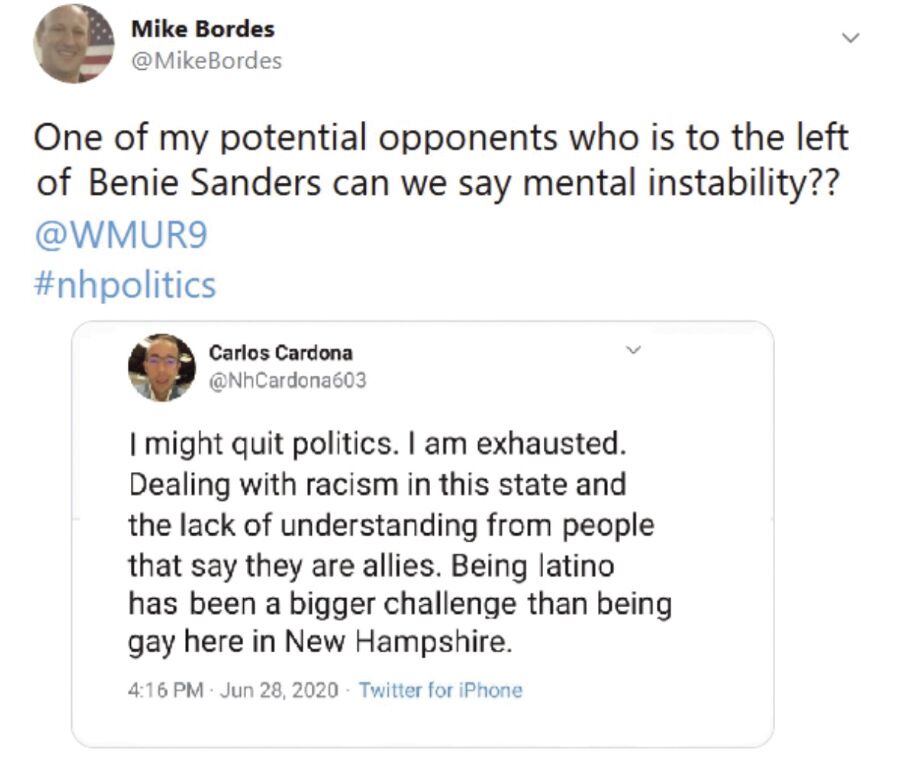 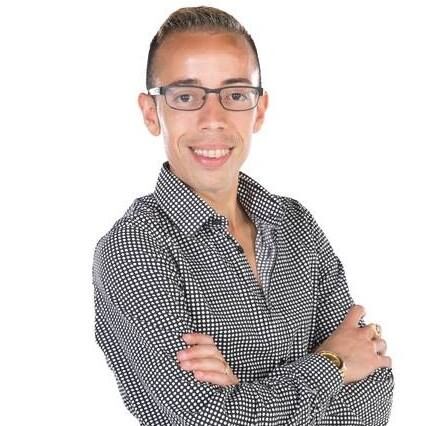 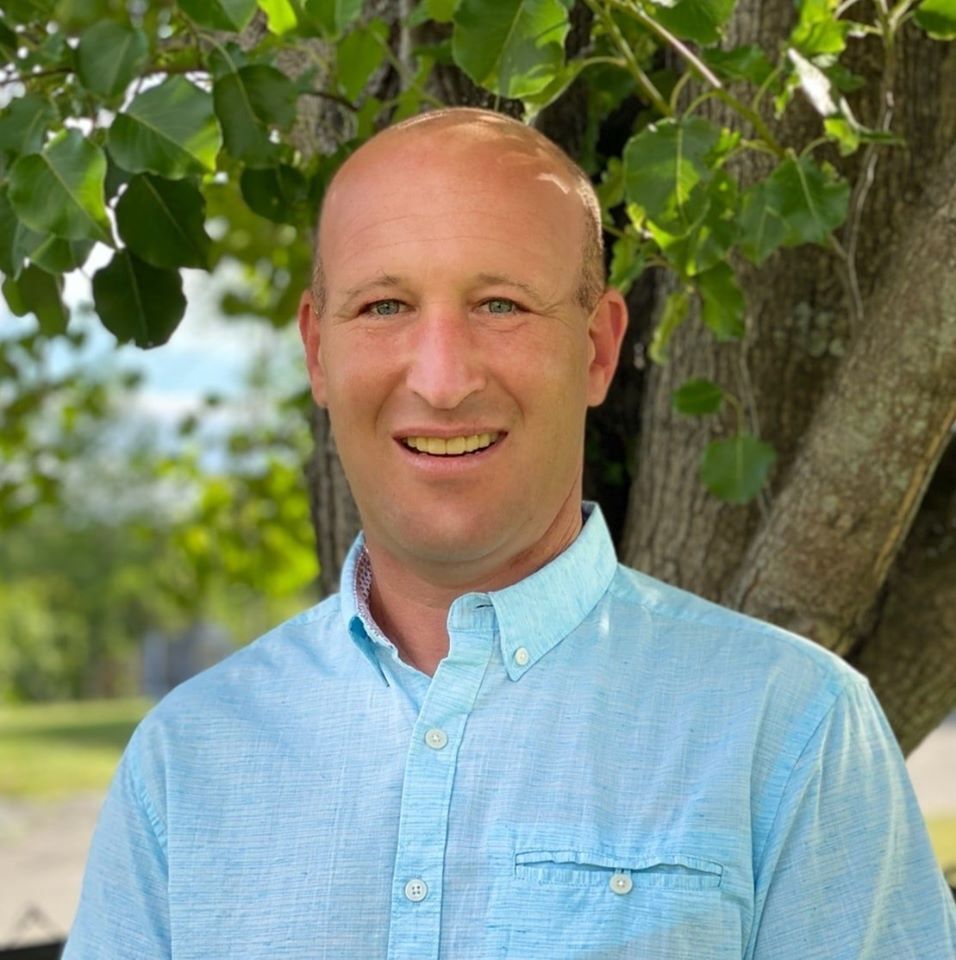 LACONIA — Mike Bordes and Carlos Cardona say they're friends now, but they took a pretty roundabout road to get there – one that included a nastiness that has become all too familiar in this age of political polarization.

Both men are running for a seat in the New Hampshire House, Bordes as a Trumpian Republican and Cardona as an unabashed liberal gay Democrat.

When their paths crossed on Twitter, the dialogue turned ugly.

“I might quit politics,” Cardona tweeted on June 28. “I am exhausted. Dealing with racism in this state and the lack of understanding from people that say they are allies. Being Latino has been a bigger challenge than being gay here in New Hampshire.”

To which Bordes responded: “One of my potential opponents who is to the left of Benie (sic) Sanders can we say mental instability??”

“While I vent how I feel about the state of politics. my racist opponent uses it to call me mentally unstable,” tweeted Cardona, a native of Puerto Rico who hosted several Democratic presidential candidates at his Laconia home last year.

“When I first saw that tweet, I was shocked because it had nothing to do with mental illness,” Cardona said. “It was painful at first to see, but it was heartening to see the support.”

There was “a big outcry from Republicans and Democrats in town that that was a terrible take on my tweet,” he said. “People are not going to stand for bullying.”

In an age when mental health has risen to a place near the top of the public health agenda, it's probably not surprising that it didn't take long for people to condemn Bordes' tweet, and he took down his Twitter account for several days. When Bordes' account went back up, the offending tweets were deleted.

“I immediately withdrew that tweet,” Bordes said in an interview last month. “It was definitely the wrong terminology used and I have since apologized.”

Bordes said he was out of line to raise an opponent's mental health as a campaign issue.

Moreover, Bordes said, “I don't think anybody should be attacking anybody on a personal level.”

Cardona said he has been the target of Republican attacks since he filed for state representative – a job that pays just $100 a year.

And then a funny thing happened on the way to the election: the candidates met face-to-face.

“I just reached out to him, we texted each other, we set a date and had a very productive conversation,” Bordes said.

Cardona said he feels “pretty comfortable that (Bordes) felt that his words were hurtful,” and they moved beyond the ugliness of social media to have “one of the most productive conversations I've had with a New Hampshire politician of the opposite party,” Cardona said. “We both talked about what our priorities are. I think we've both been fed a lot of misinformation.”

Cardona, who chairs the Laconia Democratic Party, said that misinformation often comes from the political parties themselves, when they seek to vilify candidates of the opposite party.

“Oftentimes politicians are fed information from their parties which creates division in their communities,” he said. That can lead people in one party to make assumptions about someone in the opposite party based on nothing more than a few social media posts.

While Cardona didn't spare his Democratic party from blame, Bordes declined to criticize his own Republican party for fostering an atmosphere of negativity, but agreed that he was operating under incorrect assumptions about Cardona.

“People have a lot more in common than you know,” Bordes said. “Put party politics aside and do what's in the best interests of everyone. I think that's been lacking for quite some time.”

Alan Glassman, chair of the Belknap County Republican Party, said his party bears no responsibility when candidates make remarks that cross the line of propriety.

The nature of political campaigns is that candidates try to show voters the differences between where they stand on issues, and where their opponents stand, he said. But, he added, “If somebody is out there and they blurt something out, that's entirely on their own.”

The perception that people somehow aren't accountable for comments they make on social media also fuels the division, Glassman said, but that's no excuse. “I hate nasty. People should not be nasty. We're still all members of the human race. Just because people have different opinions about certain legislation or a position on the political spectrum, there's absolutely nothing I've ever dealt with, with any of the people in politics – people above me in politics, people below me in politics – there's no push to be mean and nasty at all.”

Cardona said he and Bordes faced a choice after the Twitter dustup: continue to hammer at one another over social media, or meet and find out firsthand what the other was like. That was, he said, a decision that required genuine leadership.

So they met at Wayfarer Coffee Roasters downtown and found common ground over coffee and tea.

“Wayfarer's is neither a Republican or a Democratic place,” Cardona said. “It's a Laconia place. That's one of the great things about our city – we have a lot of businesses that put people before politics.”

“No matter who wins, we all want what's best for Laconia and the state of New Hampshire,” Bordes said, “although we may disagree on how to get there.”

“I've lived in this city for close to 12 years,” Cardona said. “I love this city and want us to figure out how, instead of putting the party first, how we can put our city first.”

Glassman, for his part, said he was delighted to hear that the two had put their differences aside and started a dialogue.

“I'm really pleased that they got together,” he said. “I think it shows professionalism and it shows maturity. What more could you ask for?”