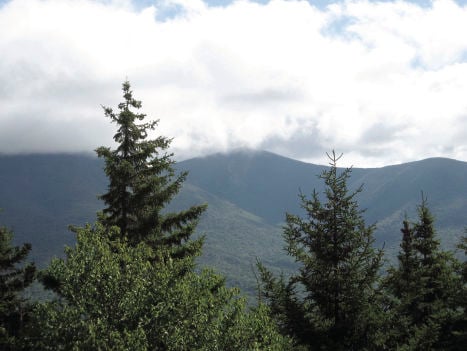 The view from the summit of Mount Pemigewasset. 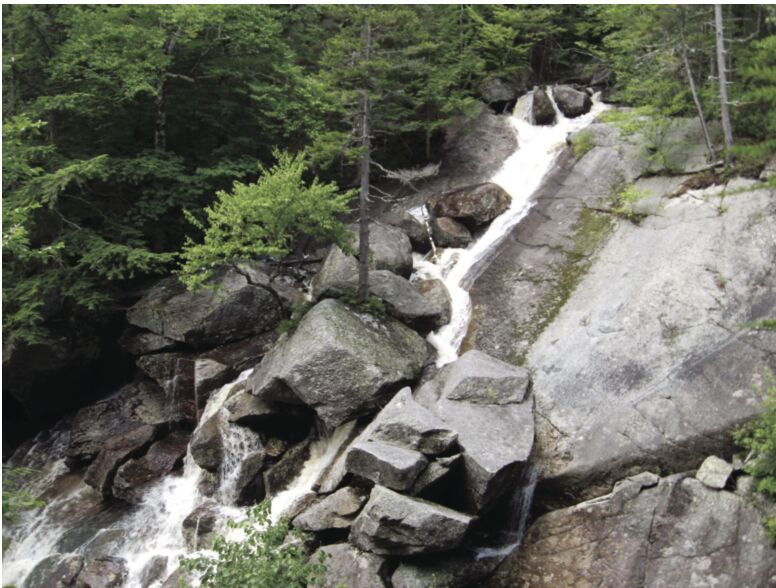 The Upper Falls of the Georgiana Falls on Harvard Brook.

The view from the summit of Mount Pemigewasset.

The Upper Falls of the Georgiana Falls on Harvard Brook.

Franconia Ridge, including the summits of Lincoln and Lafayette, was enshrouded in a layer of low hanging clouds when I reached the parking area of the Indian Head Trail. On the previous day we had torrential rain and the front was still moving through the mountains. So I thought, why waste a day climbing a mountain with no views? I could easily return another day when the skies are clear and I have the views that I had hoped for. The mountain will always be there, it’s not going anywhere. However, since I had already driven this far and the skies may clear later in the morning I reconsidered. I thought I may as well hike the trail and take what Mother Nature has given me.

Mt. Pemigewasset lies at southern edge of Franconia Notch. The Indian Head trail is one of two trails that climb to the summit and open rock ledges of Mt Pemigewasset, also known as Indian Head. The mountain is on the “52 with a View” which is a list of mountain summits in New Hampshire that have outstanding views. The list was comprised by a group of hikers known as “Over The Hill Hikers.” The Trailhead is located about .2 miles south of the Indian Head Resort on Rt. 3 and Indian Head can easily be climbed in two hours.

There was a fine mist falling when I started my hike and the trees overhanging the tread way dripped water on me as I progressed up the trail. Reuben and I followed the well-trodden path under both lanes of I-92 and then began a moderate climb that followed Hansen brook. The heavy rains of the night before had swollen the brook and Reuben enjoyed frolicking in the pools of water that the brook offered. We found beautiful cascades all along the trail. We quickly made our way following the yellow blazes that marked the trail as it climbed moderately toward the summit. The trail eventually left the brook and began a steeper climb with rough footing over rocks and boulders.

As we approached the summit we began climbing the rock ledges that have made Indian Head famous for its vistas. Just short of the summit the Pemigewasset Trail entered on the right. I then noticed that the clouds were lifting and through the trees I had a few limited views of Franconia Ridge. When I reached the summit the sun had broken out, and only the highest peaks of the Whites were clouded over. The views were outstanding from the rock ledge that overhangs Franconia Notch. So my foray into the mountains that day was not without reward.

As I stood on the summit I realized the day was still early. I had made the climb in under two hours and I had time to explore another trail. I noticed on my map that the Georgianna Falls Trail lies a short distance south of the Indian Head Trail. So Reuben and I hustled down the mountain, returning to our vehicle in an hour and headed for the Georgiana Falls.

In a few minutes we arrived at the parking area off Hanson Farm Road and were quickly on the trail following a dirt road under I-93. At .5 miles the trail turned right off the road and entered into the woods. After a short distance the trail angled left, and we soon hear the roar of Harvard Brook as it tumbled down the ledges from high above. We ambled down to the base of Georgiana falls and felt the cool mist against our skin. Reuben jumped into the pool at the base of the falls to cool off. We decided to continue on the trail to reach the upper falls. The trail snaked along the side of the gushing brook as the water tumbled over a long series granite ledges.

What is it about water falling over rock walls from heights above that lead so many of us to seek out these places? Just visit Diana’s Baths or Sabbaday Falls on any summer day and you will find crowds of people with cameras in hand gazing at the water tumbling over and down rock walls, plunging into shallow pools below. I am one of those seekers of falling water who has visited many of these places. I ask the question, “Why am I drawn to waterfalls like so many others?” I guess that I’m like many others who are drawn to and mesmerized by waterfalls, whether it be Niagara or Georgianna Falls.

As we continued our climb, the trail became steeper and was obscured in places, so we proceeded cautiously. When I reached the base of the Upper Georgina Falls I was awestruck. The sound of the cascading water resounded through the trees bordering the brook. Reuben and I continued climbing up the steep incline until we reached the ledges at the top of the falls, where we could look down at the base of the falls over ninety feet below. We were also able to view the Pemigewasset River valley as well as Loon Mountain. I was struck by the solitude that this trail offered. I encountered only two other people on the trail, yet I would guess that there were crowds flocking to the Flume, just across the road. What a gem I had discovered.

At the beginning of the day I thought of aborting my hiking plans, but as it turned out I was rewarded with not one but two of the most memorable hikes I had ever taken; both in one day. I would highly recommend these trails as being two of the most rewarding in the White Mountains and both trails can easily be done in a day.

If you are drawn to hiking other 52 with a view mountains or want to visit other mountain waterfalls I would recommend purchasing the guidebook, 52 With a View: A Hiker’s Guide, by Ken MacGray or Waterfalls of the White Mountains, 30 hikes to 100 waterfalls, by Bruce, Doreen and Daniel Bolnick. Both books are available at most book stores, including the Mountain Wandered Bookstore in Lincoln. If you do make a trip to the Mountain Wanderer you’ll be surprised by how many great books on the White Mountains are available in such a small space. Also, tell Steve Smith, the proprietor, that Gordon sent you. And if you’re at any of the local bookstores check-out my book, Paths Less Travelled, Tramping on Trails (And Sometimes Not) to find New Hampshire’s Special Places.

Hike and/or Bike: Opportunities abound in the Lakes Region

Whether you own a gravel bike, mountain bike, road bike, hybrid bike, electric bike, a bike with training wheels or a tricycle there are unlim…