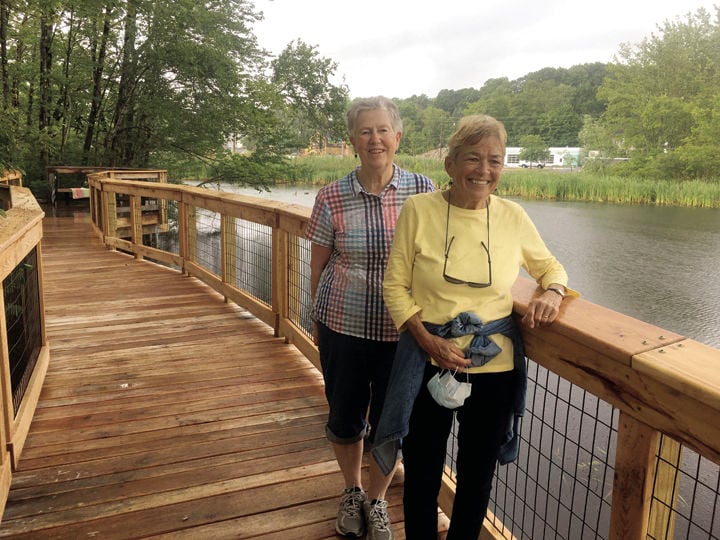 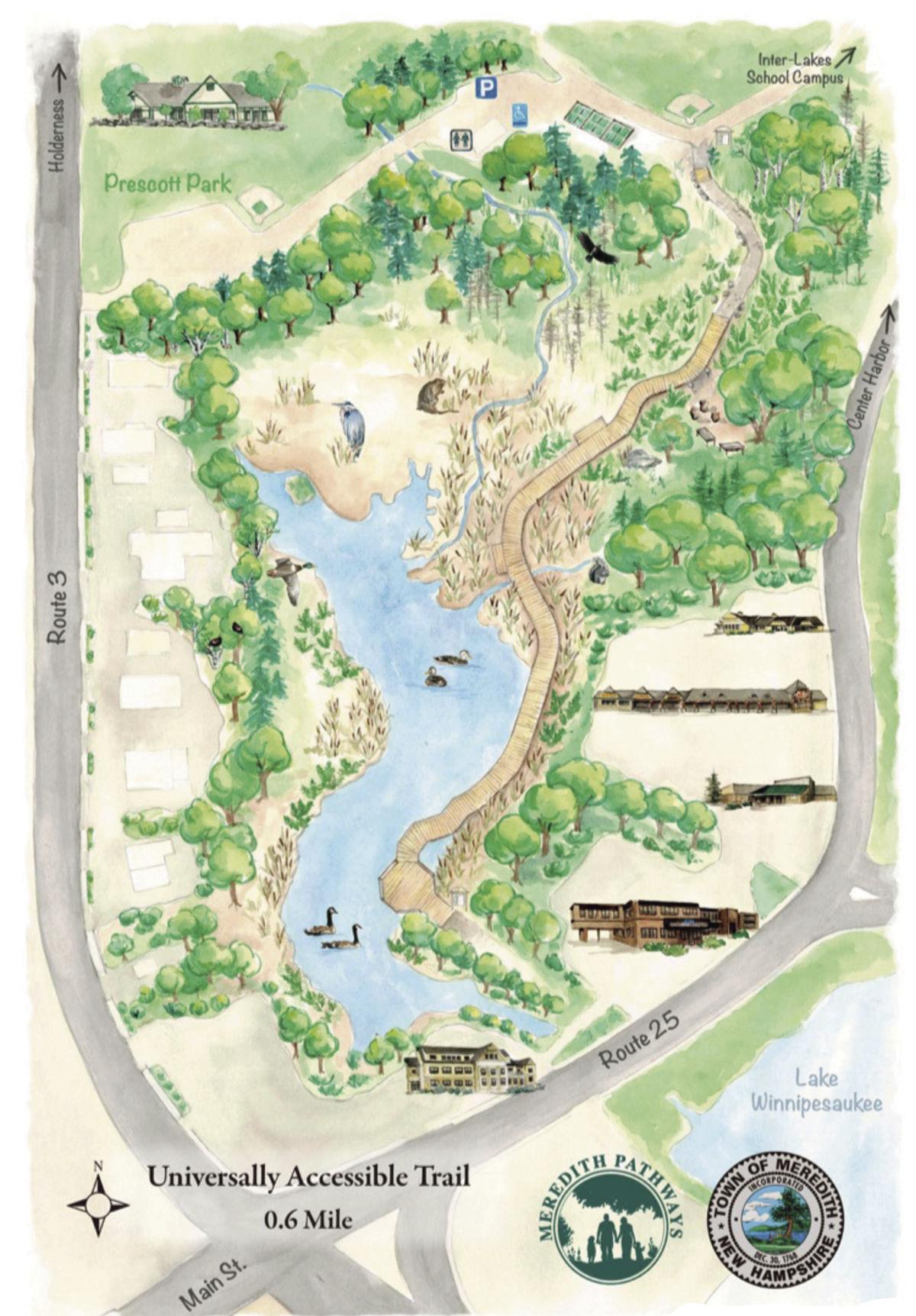 MEREDITH — Liz Lapham remembered when she and Andrea Bourn of the Meredith Village Pathways Committee kayaked on Hawkins Brook to scout for a possible trail through the scenic heart of this town.

John Sherman of the local Conservation Commission had suggested that the two women investigate the area for a walking path.

As they carried their kayaks back to their cars, Samuel Laverack, then president and chief executive officer of Meredith Village Savings Bank, walked up and asked them what they were doing.

The bank eventually committed to a large donation to help build the handicap-accessible trail, which opened Monday after eight years of research, planning, designing, fundraising and permitting. Construction cost more than $600,000, funded by donations, grants and an expenditure from the town.

It carries Laverack’s name and connects trailheads at the bank and Prescott Park.

“For this small committee to spend all its time and all these years and with the help of the town and these organizations and then some very generous people, and everybody on the committee has contributed to it, is quite an exceptional thing for our town,” Lapham said.

“The thing that impressed me and I think the rest of the committee was that this was right in the heart of the village. Anybody with a handicap, or anybody with a stroller, a walker, can walk this whole trail, and that was a real plus.”

Covering a little over one-half mile, Laverack Nature Trail at Hawkins Brook provides walkers a view of the trees, wetlands and wildlife invisible to those on nearby Route 3 and Route 25. Near Inter-Lakes schools, the community center and downtown, it provides a good route for pedestrians to leave the pavement but still get from Point A to B.

The path follows Hawkins Brook to a viewing platform overlooking the wetlands with its cattails, ferns, lily pads and ducks, behind Crosspoint Shopping Center.

“We’ve had nice cooperation with the Inter-Lakes schools and the science teachers and they can use this as a laboratory,” Lapham said. “They can come down and take water samples, anything to do with wetlands, which is becoming more and more important in this world to preserve all this stuff.

“Just this whole area, nobody knew was here. Just for the exercise part of it too, people walking. I’ve had a lot of people who work at the bank and particularly a woman who works at Aubuchon Hardware, who have just been waiting for this to be finished.”

A 1,450-foot black locust boardwalk supported by helical piles stretches through the wetlands and joins a crushed stone trail through the pine and birch woods, ending at Prescott Park. There’s an outdoor classroom, where students can sit on benches or stumps and learn about the flora and fauna.

The brook originates northeast of Keyser Road in Center Harbor, traveling south 2.5 miles along Route 3 before crossing under Route 25 and into Meredith Bay. It provides the second greatest inflow into the bay, after Lake Waukewan.

This area was once part of a much larger wetlands, which was partially filled by the town in 1830 to create Route 25 and in 1833 when Pleasant Street was created to access Meredith Neck Road.

The brook is named after the family of John and Lydia Hawkins. John Hawkins, a Revolutionary War veteran, settled in what would become Center Harbor. In 1803, their sons, William and John, purchased land where the Meredith Community Center is now located on Route 3. They operated a water-powered sawmill.

Alex Stoyle and Lyndsey Cole, who run Revelstoke Coffee in Concord, were checking out the trail for the first time on Monday with their goldendoodle, Piper.

“All the woodwork is just beautiful, so solid, but also just the fact that there is a nice body of water here and you get into those really tight pines. My God, who would have known it was right here, right up against town.”

• Stay on the trail.

• Stay on the trail.

• Leash and clean up after pets.

MEREDITH — The Meredith Village Pathways Committee has completed the Laverack Nature Trail at Hawkins Brook, and it will be open to the public…