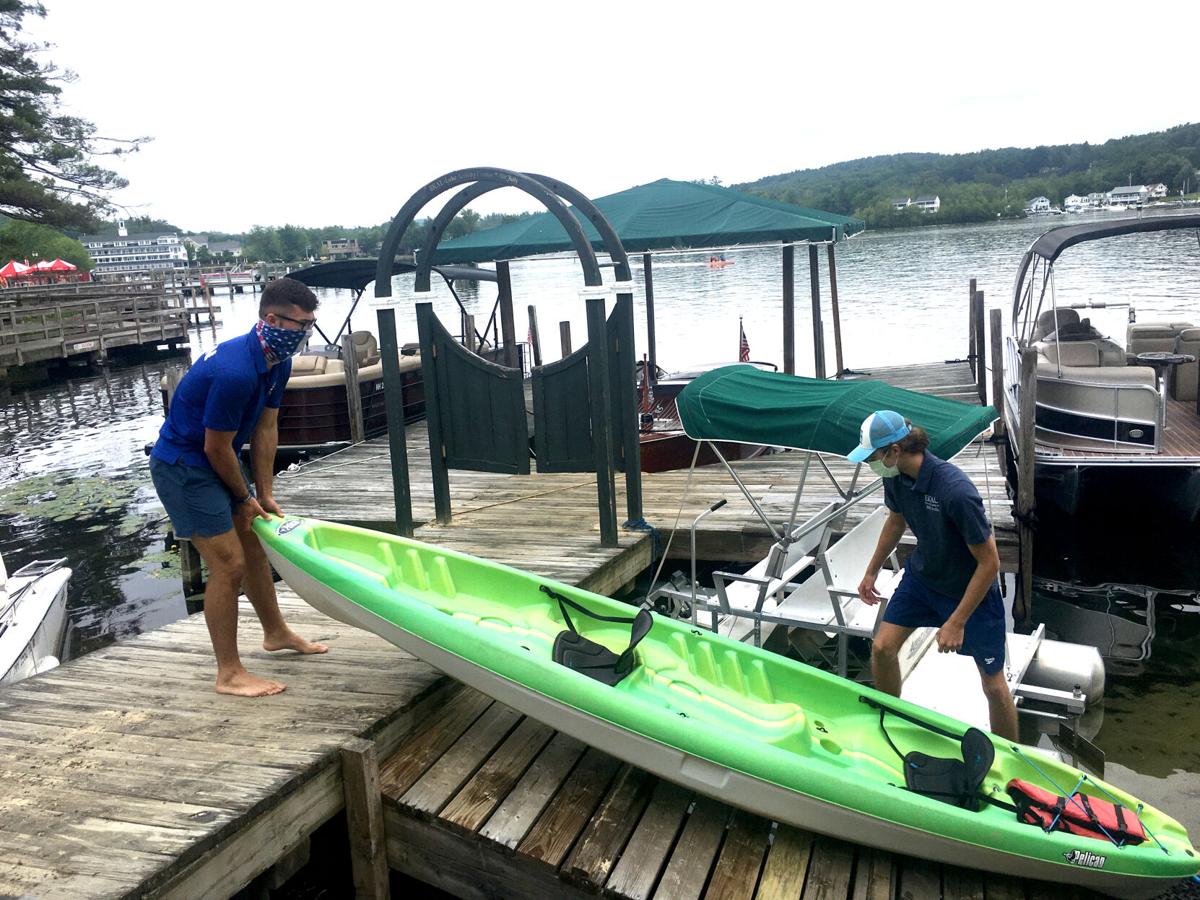 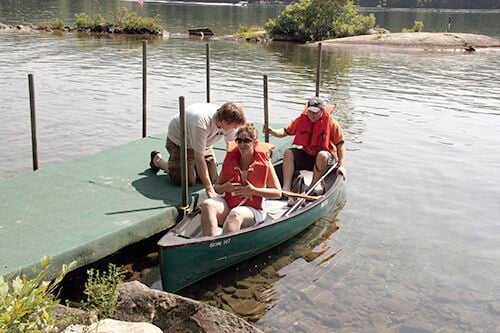 A worker at the Audubon Center on Newfound Lake helps a couple with a canoe. The center also offers kayaks for rent. The lake area is home to Wellington State Park, which the largest freshwater swimming beach in the New Hampshire state park system. (Courtesy photo) 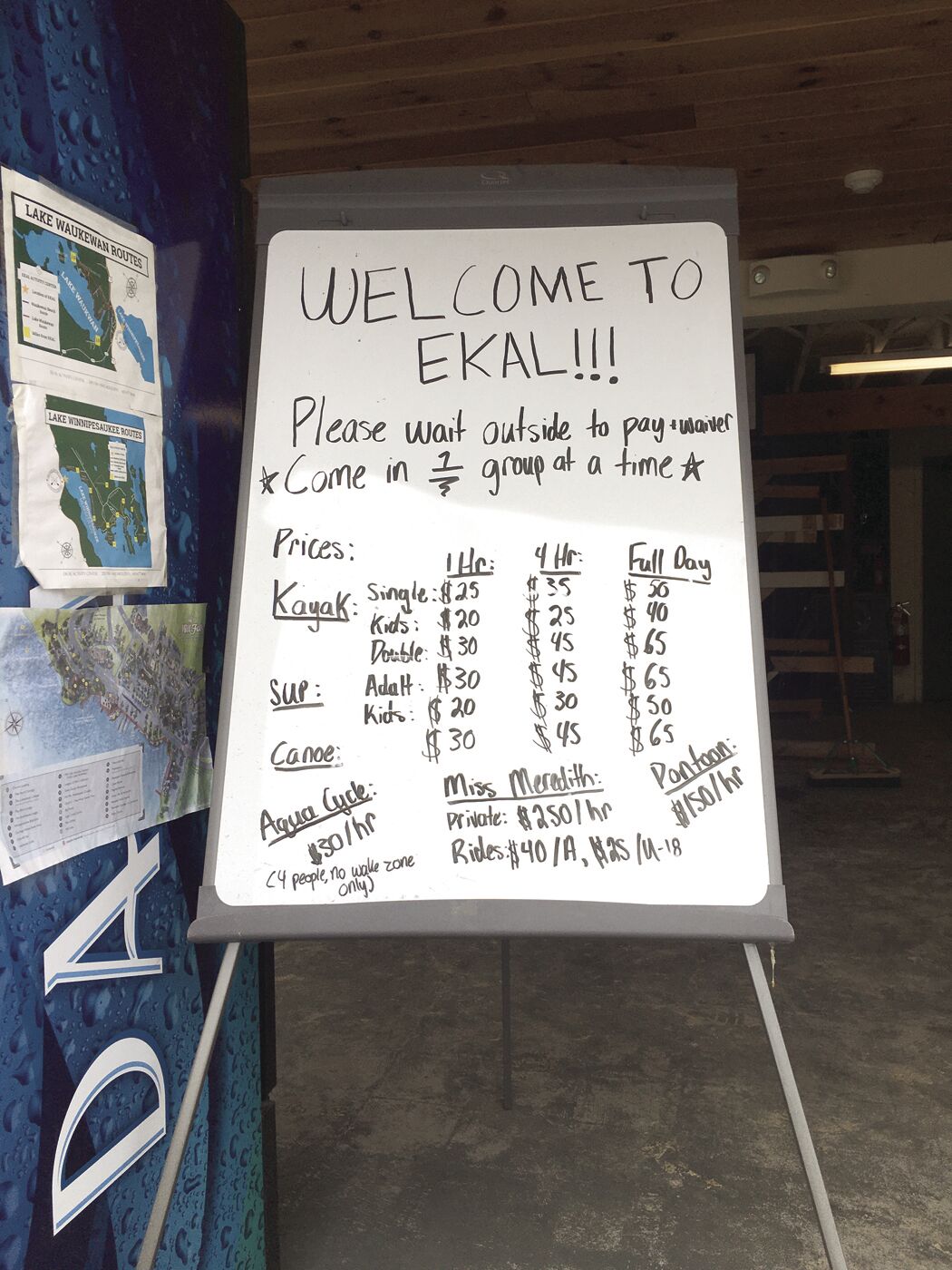 A price list at EKAL Activity Center in Meredith lists the prices to rent a variety of watercraft, including kayaks, canoes and stand-up paddleboards. The center provides life vests for those who rent equipment. (Photo by Rick Green)

A worker at the Audubon Center on Newfound Lake helps a couple with a canoe. The center also offers kayaks for rent. The lake area is home to Wellington State Park, which the largest freshwater swimming beach in the New Hampshire state park system. (Courtesy photo)

A price list at EKAL Activity Center in Meredith lists the prices to rent a variety of watercraft, including kayaks, canoes and stand-up paddleboards. The center provides life vests for those who rent equipment. (Photo by Rick Green)

MEREDITH — Want to get out on the waters of The Lakes Region for cheap and get some exercise to boot?

A kayak may be the answer. No experience required.

The good people at the EKAL Activity Center in Meredith offer advice for an easy paddle around Meredith Bay — float around near the shore, or if you’re only slightly more adventurous, head off to Indian Island.

Chances for tipping over and having to swim the kayak back to shore: Minimal to virtually non-existent, said Activity Center employee Tommy Donahue.

“See the Boston Whaler right here?” Donahue asked. “We use it when people flip over or need help. We’ve used it once this year. And that was for a canoe, and they really didn’t need help. And we’ve done over 1,000 rentals.”

What if you do tip it over?

“If you’re in the middle of the water, it’s difficult to get it back over unless you have a base of land to push off of,” Donahue said.

Of course, sit-on-top kayaks won’t fill up with water, so are easier to turn over, than those that you sit in, which will take on water, as will canoes.

“The equipment won’t sink to the bottom, but like it will be difficult to flip it back over and get on,” Donahue said.

“One time, somebody sunk a canoe and they were out there like holding it,” Donahue said. “Somebody called us from their boat, and they were like, ‘Hey we found a person flipped over in a canoe.’ We zipped out there and picked them up.”

After donning a life vest and shoving off, there’s plenty to see. The Town Docks, the Sculpture Walk, Clough Park all look a little different, a little better, when you are on the water looking in instead of on the land looking out.

Turns out making it to Indian Island is a breeze. After all, you can go as fast or slow as you want. It’s not a competition.

The little island is graced by an 11,000-pound eight-foot tall bronze replica of a Native American. Glenn Hines of Houlton, Maine, and his wife, Diane, crafted the impressive sculpture.

The trip back to the dock was as easy as the trip out, with no current to speak of.

Back on dry land, Michael Cipoletti, 56, of Salem, Mass., was putting his shoes back on after touring the bay with a friend in a tandem kayak.

He described the experience as “awesome, great.”

Cipoletti had already taken off his life vest, which will be sanitized as part of procedures to limit the spread of COVID-19.

He comes to Laconia every year.

“We stay like a week,” Cipoletti said. “We do kayaking and a lot of Weirs Beach. We were going to go ziplining at Gunstock, but it was closed because of the virus. Jeez, what’s next.”

One thing he likes about kayaking is that it’s much less expensive than renting a motor boat.

At Newfound Lake, kayaks can be rented at the Audubon Center for $25 for four hours.

On Squam Lake, Holderness Harbor rents them for $10 an hour, or all day for $50.

Rolling down the river

A month and a half ago, we had a fun kayaking trip down the Merrimack River, running from Franklin to Concord, with the family and grandkids. …