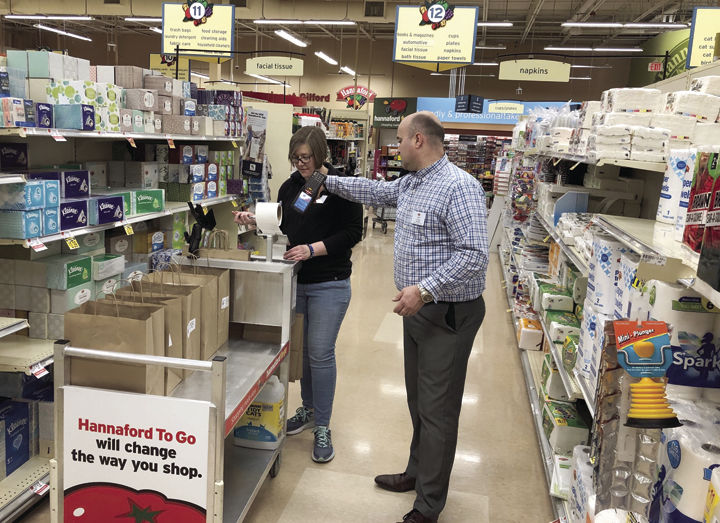 Joel Lloyd, manager of the Hannaford Supermarket in Gilford, scans an item as he and Kristin Reedy fill a customer’s online order Thursday. Rising concerns over the coronavirus have resulted in greater demand for the store's "to go" service, which eliminates the need for customers to go inside the store. (Michael Mortensen/The Laconia Daily Sun photo) 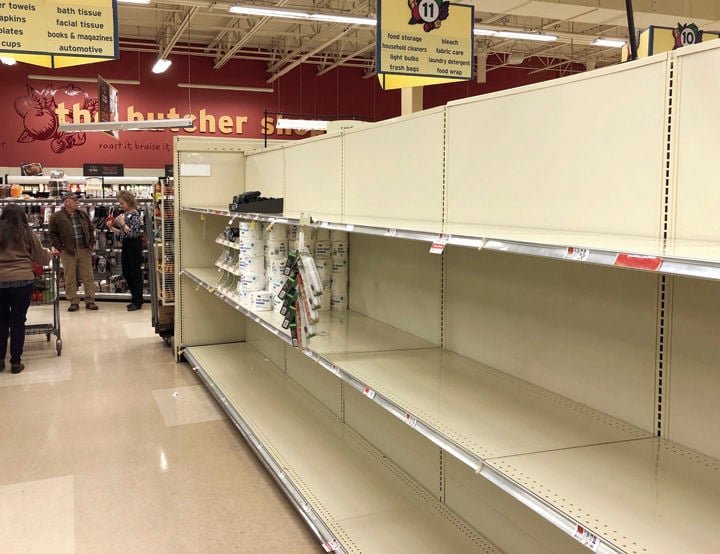 Shelves at the Hannaford Supermarket in Gilford that would normally be stocked with toilet paper were virtually bare by midday Thursday after being fully stocked in the morning. Concerns over the coronavirus have triggered higher-than-usual demand for toilet paper nationwide.

Joel Lloyd, manager of the Hannaford Supermarket in Gilford, scans an item as he and Kristin Reedy fill a customer’s online order Thursday. Rising concerns over the coronavirus have resulted in greater demand for the store's "to go" service, which eliminates the need for customers to go inside the store. (Michael Mortensen/The Laconia Daily Sun photo)

Shelves at the Hannaford Supermarket in Gilford that would normally be stocked with toilet paper were virtually bare by midday Thursday after being fully stocked in the morning. Concerns over the coronavirus have triggered higher-than-usual demand for toilet paper nationwide.

LACONIA — Field trips were cancelled, jury trials postponed, some schools were closed and businesses were struggling to adjust throughout the Lakes Region on Thursday amid growing concerns about coronavirus.

So far, these concerns have outpaced actual local spread of the disease. Six people in New Hampshire have tested positive, all in Grafton or Rockingham counties.

All schools in the Governor Wentworth District were closed Thursday after officials learned an employee’s family member was being tested for the virus, also called COVID-19.

A trip by members of the Laconia Middle School Band to Boston was called off.

Superintendent Steve Tucker said state Education Commissioner Frank Edelblut recommended “that any school closely scrutinize the purpose and destination of any planned travel and consider postponing any out-of-state travel for the time being.”

Massachusetts Gov. Charlie Baker has declared a state of emergency in the Bay State as a result of coronavirus.

The state Superior Court system announced that jury trials were being postponed until further notice.

Belknap County Attorney Andrew Livernois said the move would delay two jury trials scheduled to begin next week, and two others that were on the court docket for the week of March 30.

Locally, many nursing homes were screening or restricting visitors and cancelling activities. The elderly and those with significant underlying medical conditions are most at risk, according to the U.S. Centers for Disease Control and Prevention.

The Belknap County Nursing Home and St. Francis Rehabilitation and Nursing Center, both in Laconia, and the New Hampshire Veterans Home in Tilton, were asking visitors if they have any symptoms that might be associated with the flu or a cold, or if they have had contact with someone with a confirmed or suspected case of COVID-19, or who had traveled overseas to one of the high-risk areas within the last 14 days.

At the County Home, visitors who are found to be a potential risk may be asked to visit only if they wear protective equipment such as a face mask.

Michael McDonough, executive director for marketing and communications for New Hampshire Public Charities, said visitors at St. Francis who exhibit symptoms or who have had exposure to someone with the virus will be advised to postpone their visit.

In addition, anyone who has been on a cruise within the past 14 days or who has been in a state where a state of emergency has been declared will also not be allowed to visit. The only exception, McDonough said, would be those visiting residents who are in end-of-life care, in which case they will be required to wear protective gown, mask and gloves.

Golden View Health Care Center in Meredith has banned all visits except to patients who are in end-of-life care, Rosemary Simino, nursing facility administrator, said.

“We have no concerns (about the virus being inside the facility),” she said. “This is strictly preventative."

Forestview Manor in Meredith also said it would ban visitors starting today. It encouraged families and loved ones of residents to visit via social media.

Likewise, Golden View is encouraging family and friends to visit via Skype, Facetime, or another social media platform.

The Veterans Home also canceled its Easter egg hunt, which was scheduled for April 4, according to Sarah Stanley, the home’s program information officer.

Public reaction to the situation varied widely, based on interviews with random grocery shoppers Thursday.

Bonnie Taylor, of Laconia, said she was “being careful,” but was otherwise leading her life much as usual. However, she was disappointed that people are not being tested as much as they should be for the virus.

“Fortunately I don’t have to go out a lot, and I don’t go to crowded places,” she said.

Brooke Dinard, of Belmont, standing outside Vista Foods in Laconia, said her life has not changed much, but she was unsure whether she will take a planned visit to Colorado in about a month.

But Tom Worhood of Moultonborough, said the media is hyping the disease. He said except for the elderly and those with underlying conditions, the COVID-19 is not a serious threat.

“It’s a virus and in time it will go away just like the other 18 COVID viruses did,” he said as he walked out of the Hannaford Supermarket in Gilford. He said all the misinformation about the disease was being spread “by those who want to make President Trump look like he’s not doing enough.”

COVID-19 stands for Coronavirus Disease 2019, the year of its discovery.

Meanwhile, inside the Hannaford store, Manager Joel Lloyd said there has been a noticeable increase in the number of customers who are opting to use the store's "to go" service, where customers submit their shopping list online and store employees fill the order, then bring it to customers’ cars in the parking lot, eliminating the need to go into the store.

Because of the increased demand for the service, Lloyd was helping to fill orders Thursday afternoon.

He said the store receives seven shipments a week to replenish its inventory. He said it has been mostly business as usual since coronavirus started dominating the news. However, he noted there has been a much higher demand for products like sanitizing gel, wipes, and toilet paper.

On Thursday the toilet paper shelves were practically empty at noontime. The shelves were fully stocked when the store opened at 7 a.m., Lloyd said.

Karmen Gifford, president of the Lakes Region Chamber, said many businesses throughout the region are adjusting policies and procedures to come up with best practices for dealing with the public health threat.

"Businesses are taking action and putting policies in place," she said. "Northway, Meredith Village (banks) have teams monitoring the situation."

The new policies include no company travel outside the state, no hosting of large public events and an emphasis on social distancing.

Other organizations, such as Lakes Region Community Developers, are having their employees work remotely, or conducting business meetings by video conference rather than in person.

Working from home can have its own challenges. Even for companies where this is possible, not all employees have the right hardware, computer savvy or software security to work remotely.

Many in the business community are discussing policies for employees returning from vacation. Depending on what country the employee visited, there may be a need to isolate themselves for a period before they return to the office, Gifford said.

"People are being cautious and realizing that if they can separate themselves, it will be better moving forward," she said.

Bristol town officials reminded those going to Saturday’s Town Meeting to cough and sneeze into their elbows, wash their hands frequently, and keep their fingers away from their mouths. They also encouraged voters to try to stay at least 6 feet away from each other, and avoid handshakes and high-fives.

Kirk Beattie, the Laconia fire chief, said local emergency management officials are scheduled to meet next Wednesday, but will meet sooner if there is a COVID-19 case in the area.

TILTON — Ellah Murray has endured more hardship in her three years of life than most people will before they reach 83. She was born premature,…

Have you signed up to receive the COVID vaccine and, if so, how would you rate the process? Click here to answer