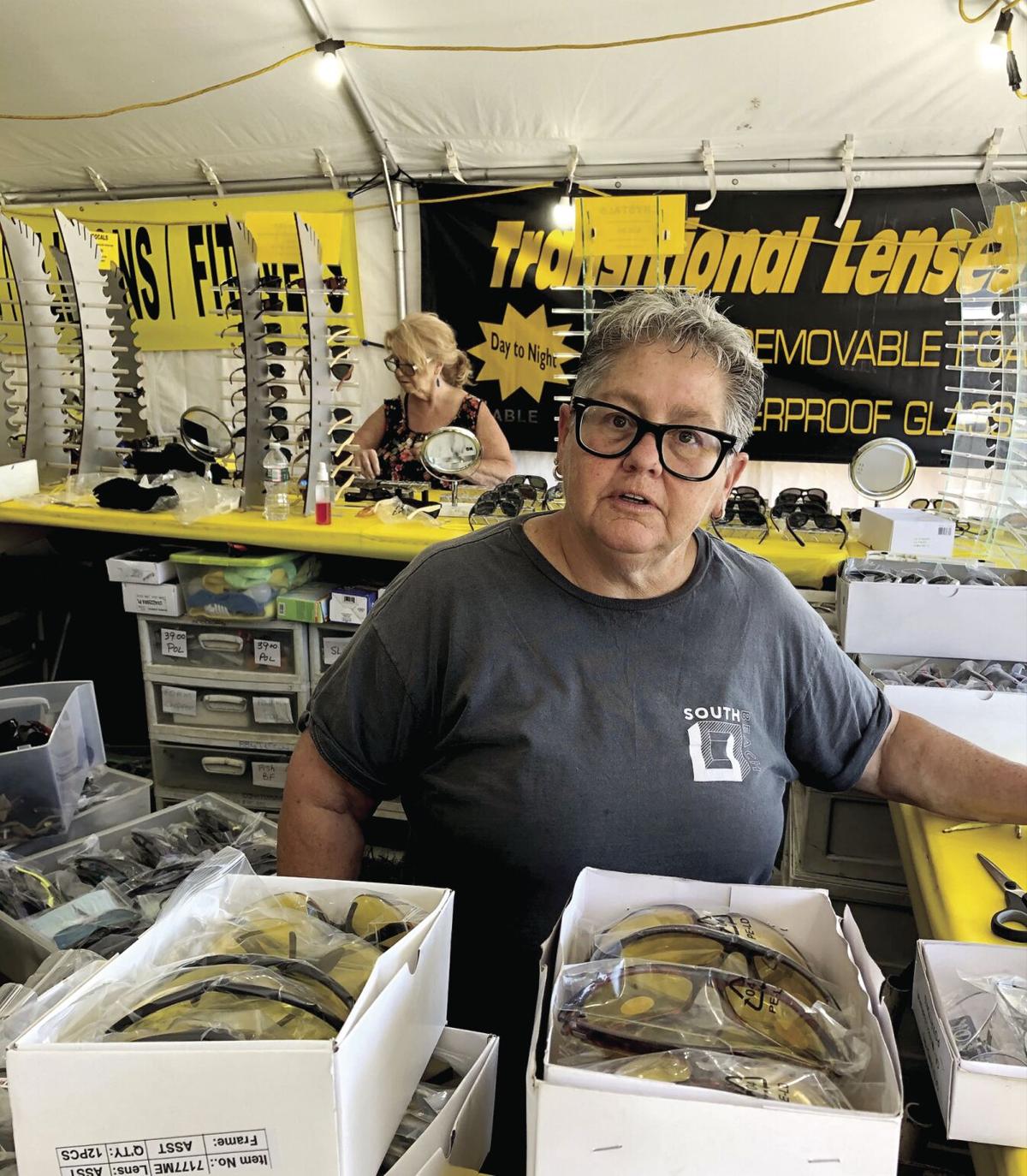 Mari Miles gets ready to set up her eyewear booth in Weirs Beach for Laconia Motorcycle Week. Miles and her partner, Teresa Scheil, operate Sunglass Connection and will visit 15 motorcycle rallies and other sports shows this year. (Michael Mortensen/The Laconia Daily Sun photo) 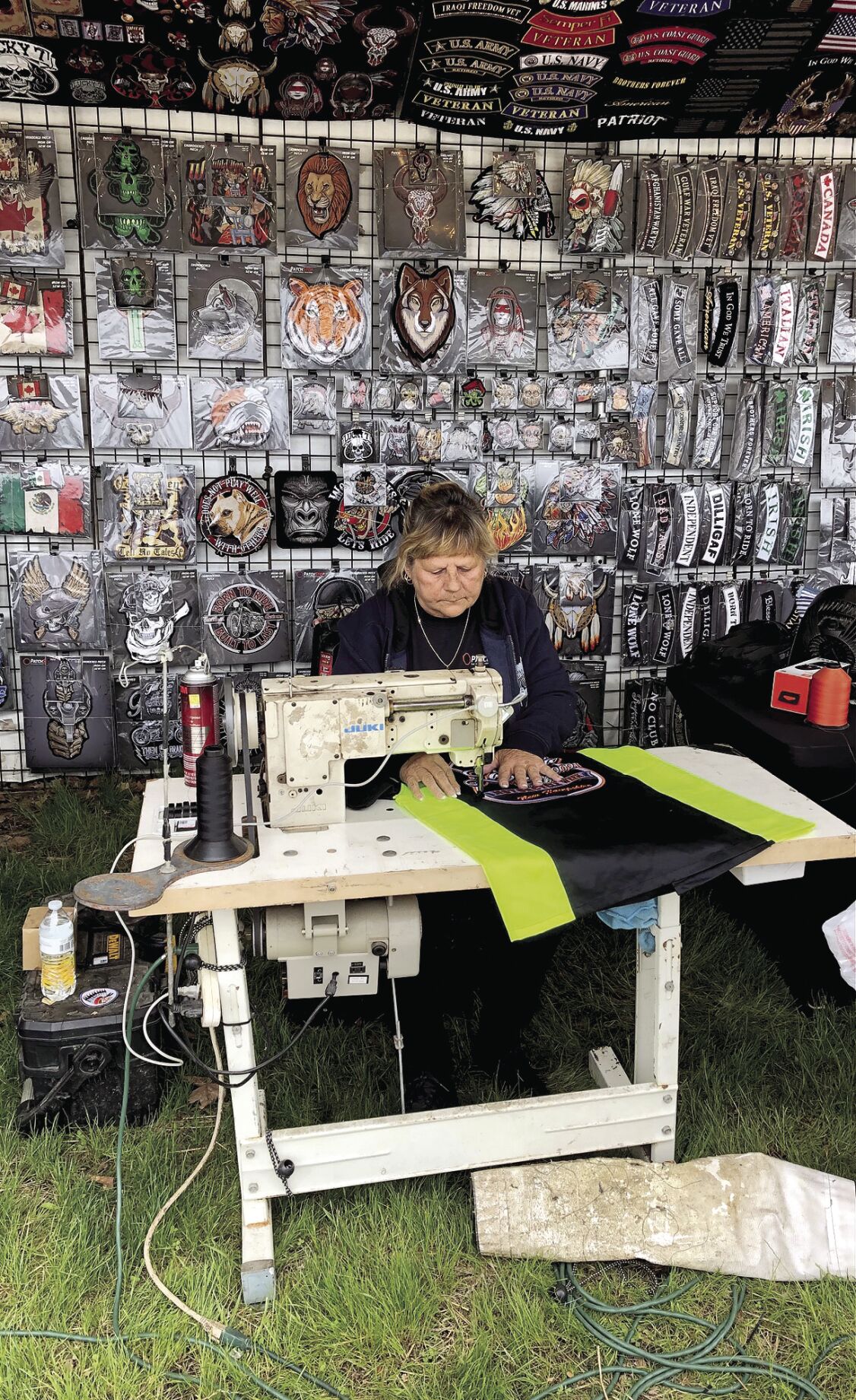 Mari Miles gets ready to set up her eyewear booth in Weirs Beach for Laconia Motorcycle Week. Miles and her partner, Teresa Scheil, operate Sunglass Connection and will visit 15 motorcycle rallies and other sports shows this year. (Michael Mortensen/The Laconia Daily Sun photo)

LACONIA — Motorcyclists have started rolling into the area, and organizers and businesses are bullish that the next nine days will be busy after the COVID pandemic put a damper on last year’s rally.

The expectation of a big turnout is evident throughout Weirs Beach, which for decades has been the epicenter of the nation’s oldest motorcycle rally.

David Wagner and his friend Randy Gibson were among the early-bird motorcyclists who were already in Weirs Beach early Friday morning. Both had taken a leisurely four-day ride up from their home near Winston Salem, North Carolina.

For Wagner, it was his first visit to Laconia Motorcycle Week in 20 years.

“I always said that I wanted to go back,” he said, as he sat on his bike parked on Lakeside Avenue, where vendor booths lined the thoroughfare on the opposite side of the street.

Vendors, who were not allowed at last year’s downsized rally, are back ready to sell leatherwear, T-shirts, a wide assortment of insignia to adorn a biker’s vest, and other types of biker paraphernalia.

Local businesses are also looking forward to a banner week and summer as well.

“We’re ready for a record year,” said Steve Deli, who along with his wife, Anne, own Laconia Harley-Davidson in Meredith.

The Delis said they have brought in bikes from their other dealerships to ensure a sufficient inventory for riders looking to purchase a new bike during the coming days.

Anne Deli also noted that every vendor site at the dealership is taken.

In Laconia, about 115 vendor booths have been licensed, according to the city’s Licensing Department.

Some vendors operate multiple booths, set up along Lakeside Avenue or bordering Route 3 near the Weirs Channel.

Heather Williams was helping put the finishing touches on one of the Lakeside Avenue booths being operated by the Patch Shop.

“There are about 300 or 400 large patches and about 1,000 small ones,” she said, pointing to display boards which allow customers to peruse the selection.

“New riders like to buy a vest and then fill it up,” Williams said.

Patches with the American flag or military symbols or slogans are the biggest sellers. “Anything patriotic,” she said. But patches proclaiming gun rights are also popular.

Mari Miles and Teresa Scheil are a two-person team who operate Sunglass Connection. They sell all kinds of eyewear geared to the needs and fashion sense of motorcyclists.

On Thursday they were busy setting up their booth with a view of Weirs Bay.

Some glasses have tinted yellow lenses, others are clear,  While still others have lenses which darken in brighter light. There are also glass frames with foam padding which helps protect riders from airborne debris or having their eyes bothered by strong winds.

Like other vendors, Miles and Schneil spend much of the year — in their case about one-third — on the road attending biker rallies and other sports shows around the country. As soon as Laconia Motorcycle Week wraps up next Saturday night, the two will pack up their Dodge Caravan and head for Johnstown, Pennsylvania, for the Thunder in the Valley rally that will take place June 24-27. All told, they will set up shop at 15 events this year, Miles said.

For bikers like Wagner and Gibson getting to a rally is more fun than the rally itself.

Gibson said he rode out to the big rally in Sturgis, South Dakota, some years ago.

“I got there. I bought my (Sturgis rally) T-shirt and headed home the next day,” he said.

Local officials said they were happy to hear it.

“We are pumped. We are so glad to see you guys come back,” Meredith Town Manager Phil Warren said at the Laconia Motorcycle Week kickoff news conference Thursday.

“Let’s get back into the saddle,” he said.