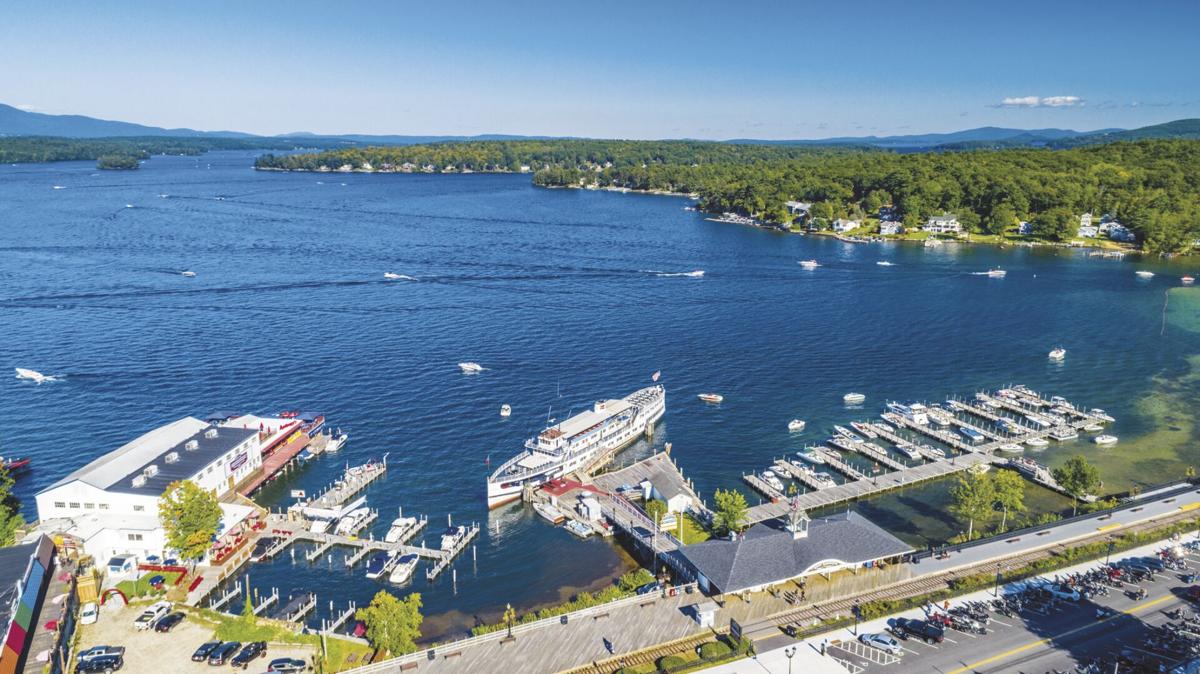 Last weekend I headed up to Lake George, New York, for a wedding. During that time, I took the opportunity to explore the lake and compare similarities to Lake Winnipesaukee. Lake George is known as the "Queen of American Lakes" and is located roughly 210 miles north of New York City. When I approached the lake along Route 87 at 8 p.m. Friday, the three-lane highway was full of Labor Day weekend traffic. Instead of red and white vehicle license plates, the color was bright yellow, and lots of cars. I passed the Lake George Factory Outlets a bit more upscale than our Tanger Outlets in Tilton. However, the next morning I wandered over to Lake George Village at its southern tip and must say it was over-commercialized. In the "Village," you will find dozens of souvenir shops, tons of restaurants and pubs with elevated decks, boutiques, arcades, and a multitude of motels, inns, cottage colonies, and resorts as far as the eye can see. Congested? Yes. There's even a "Frankenstein Wax Museum" to take the kiddies to. At the end of the bay, their coveted "million dollar beach," a 1,700 foot strand of beach, boathouses, concessions, and a boat launch. Several large excursion boats, all booked solid, provide tours of this beautiful Adirondack lake similar to our MT. Washington on the big lake.

The big crowds and bumper-to-bumper traffic pushed me to explore the outlying areas of this 32-mile long lake. The scenery improved as I rode around the eastern shores and later the western shoreline. Unlike Winnipesaukee, the main roads followed the lake contours similar to Lake Tahoe with steeper drop-off driveways to the lake. Winnipesaukee has so many necks, nooks, and coves with more intricate country roads to get to the lake. "Diamond Point" leads into "Boulton Landing," with more shops, restaurants, and marinas leading to the elegant "Sagamore at Boulton Landing" and other posh Adirondack bayside resorts and restaurants along the water. The Fort William Henry Museum, an outpost during the French & Indian Was and the resort itself were popular with tourists.

Several mountain ranges surround Lake George, with some of the mountains literally jutting out from the water's edge, making their elevations seem higher than the Belknap and Ossipee Mountains surrounding our lake. However, their highest peak, the Black Mountain Range, had an elevation of 2,646 ft compared to Mount Shaw on Winnipesaukee's Ossipee Mountain Range at 2,989 ft. (That does not include Mount Washington at 6,288 ft. off in the distance.

The configuration of the two lakes is quite different. Winnipesaukee is approximately 21 miles long, 1 to 9 miles wide, with 240 miles of shoreline and 258 islands. Lake George, on the other hand, is 32 miles long with a maximum width of 2 miles (average width is 1.33 miles) and 176 miles of shoreline, including 20 miles of state-owned and 40 miles of island shoreline. There are 170 islands on the lake 148 of them are state owns. The lake on the northern stretch is referred to as "the narrows," which runs close to 21 miles. However, it is very narrow compared to Lake Winnipesaukee.

One unique feature of Lake George is its access to state-owned islands. There are 387 shoreline campsites located on 44 state-own islands. Boat slips on the islands provide great access for campers in their boats to come over from the mainland. Many sites are well forested and private. All sites on the islands have a dock for one boat, a fireplace, and a picnic table.

"Cotton Point" on the westerly shore was very interesting — a narrow peninsula with homes on both sides. There are lots of water taxies at the local marinas to get back and forth to the islands. I looked at a couple of golf courses…the course at the Sagamore Resort is a gem with beautiful views of the lake, and the" top of the world gold course" on the eastern shores offered magnificent views of the beautiful lake at the gateway to the southern Adirondacks.

In summary, I would call Lake George a true Adirondack lake with magnificent mountain scenery and some beautiful lakefront homes with boathouses and a number of fine Adirondack lodges and resorts. However, its beauty is marred by its overly touristy vibe and over-commercialization of "the village of Lake George." It's a lot more honkytonk in appearance and traffic congestion and people compared to the scenic resort towns or "villages" of Meredith or Wolfeboro on Lake Winnipesaukee. Plus, Lake Winnipesaukee is a much broader and interesting lake to navigate with its 258 islands. However, both of these "grand lakes" are absolutely spectacular, and we are so lucky to have both of them within a 4-hour driving distance of each other.

This article was written by Frank Roche. Frank is president of Roche Realty Group with offices in Meredith and Laconia, NH, and can be reached at (603) 279-7046. Please feel free to visit www.rocherealty.com to learn more about the Lakes Region and its real estate market.