LRGH files for Chapter 11 bankruptcy, will stay open as Concord bids on assets 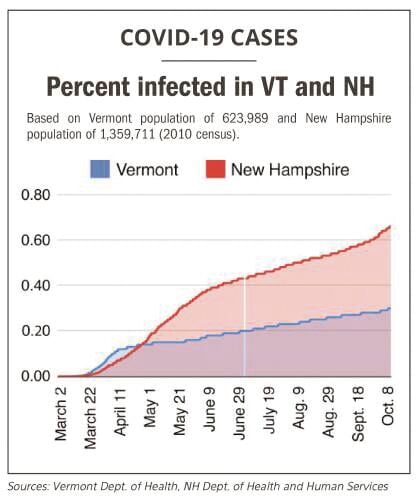 WEST LEBANON — A dozen new cases of COVID-19 in Vermont have been linked to an ice rink in the Montpelier area, state officials announced Tuesday.

And in New Hampshire, the sport also is under examination by the Governor’s Economic Re-Opening Task Force after some recent cases of COVID-19 were tied to hockey academies.

The 12 cases in Vermont were connected to a youth and adult hockey programs that both use the rink at the Central Vermont Memorial Civic Center in Montpelier, though not at the same time. Contact tracing was underway for the hockey cases, Health Commissioner Mark Levine said during a Tuesday news conference.

He said it was unclear whether the virus was transmitted through play, or through carpooling, travel or team gatherings. The youth team has asked its participants to get tested and the health department recommends testing for the adult players, Levine said.

The state also announced several new infections at schools on Tuesday, and Levine said there is some overlap between the hockey infections and schools.

In New Hampshire, D.J. Bettencourt, chairman of the Governor’s Economic Re-Opening Task Force, said in an emailed statement Tuesday that new guidance for hockey is expected within the next week after “there have been some recent incidents, specifically with hockey academies, that ... present a unique challenge.”

The Union Leader reported last week that the Rinks at Exeter temporarily suspended programs for three of its youth hockey teams after about a dozen players and a staff member tested positive for COVID-19.

“The Governor’s Office, the state division of public health and the Attorney General’s Office are actively working with rink owners and hockey programs to craft additional guidance specifically addressed to those organizations,” Bettencourt said. “In the meantime, the state is in close and constant contact with hockey leaders across New Hampshire to make it clear what the current guidelines require and how to maintain compliance. Our goal is focused on finding ways to keep players on the ice in a safe manner for all involved.”

Upper Valley youths play in travel leagues in both states. An Upper Valley athletics official confirmed that some athletes here have quarantined because of exposure to a schoolmate involved in a club hockey program who had tested positive.

At a news conference last week, Vermont Secretary of Education Dan French said he expected a task force would issue guidance for winter sports by the end of October.

Given the high level of contact involved in wrestling and the large number of people involved in indoor track, he said he was “not optimistic” those sports would be allowed.

But others such as basketball and hockey likely could take place with mitigation efforts in place, French said at the time. He said practices were likely to begin in late November and games in January.

Vermont health officials announced several COVID-19 cases in schools, including at the Windsor School, on Tuesday.

The Windsor case was a member of the staff who does not have “prolonged contact with teachers or students,” Windsor Southeast Supervisory Union Superintendent David Baker said in a phone interview.

“It was a pretty isolated case,” he said.

The staff member quarantined on Thursday and received the positive result on Friday, Baker said. The “two or three” other employees who work with the person who tested positive are now in quarantine.

After consulting with the Vermont Department of Health, Baker said there was no need to quarantine or test any other members of the school community. The school already requires masks, 6 feet of distance between people and regular hand-washing, he said.

The state had not recommended that the schools close or move to remote learning as a result of their positive cases, Levine said. He noted that the state has not yet seen any instances of transmission in schools.

“School cases are associated with people getting the virus in the community, outside of school,” he said.

Vermont officials on Tuesday also updated the state’s quarantine rules related to New Hampshire’s Grafton County — stretching from the Lebanon-Hanover area north to Littleton, N.H., and east to Bristol and Waterville Valley — after the county experienced an increase in COVID-19 cases, at 442 estimated active cases per million people.

(Red counties on Vermont’s map — which include several counties in populous southeastern New Hampshire — have more than 800 active cases per million residents.)

Vermont allows essential travel, without quarantining, to all counties on its map, regardless of their color. Essential travel includes commuting to work, getting medical care, picking up groceries or medicine and attending school.

However, non-essential travel to and from counties that are yellow, such as Grafton, or red, require a 14-day quarantine or a seven-day quarantine with a negative test result.

“Green” counties in the Northeast with fewer than 400 active cases per million are considered safe for travel without quarantine. Sullivan County, with 278 cases per million, remains green on Vermont’s map, meaning no travel restrictions are in place.

New Hampshire announced 77 new cases of COVID-19 on Tuesday, including one in Grafton County. There are 787 total active cases in the state, including 22 in Grafton County and six in Sullivan County. Vermont announced 11 new cases on Tuesday, bringing the total in the state to 1,886, with 213 currently active. Windsor County has had 17 cases in the past two weeks, while Orange County has had two.

Material from VtDigger was used in this report. Nora Doyle-Burr can be reached at ndoyleburr@vnews.com or 603-727-3213.

LACONIA — Indoor use of ice skating rinks, including the local Merrill Fay Arena, will be halted for two weeks after 158 people were diagnosed…