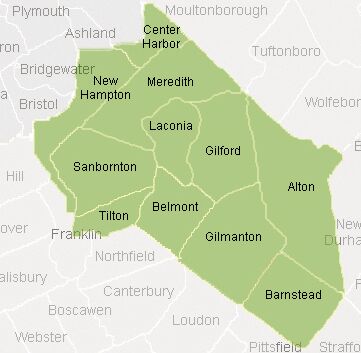 BELMONT — With the results of the 2020 census comes an obligation for the New Hampshire state government. Or, it could be seen as an opportunity. An advocacy group has been waging a statewide campaign to urge legislators to see it more as the former and less as the latter.

Passed recently in Belmont, and in town meetings across the state, was a warrant article that urges the state legislature to conduct its redistricting – the re-drawing of state representative and senate districts – in an open, fair and transparent way. The hope of Open Democracy, the organization behind the campaign, is that the public’s supervision of the process will prohibit opportunities for gerrymandering, which is the practice of dividing voters into districts in such a way that advantages one party’s chances at the expense of the other’s.

The ballot measure that Open Democracy has put before New Hampshire voters – and has seen it passed in landslide numbers – directs the town’s elected officials to send a letter to their state representatives and senators, urging them to carry out the redistricting “in a fair and transparent way through public meetings, not to favor a particular political party, to include communities of interest, and to minimize multi-seat districts.”

It’s a non-binding directive, but Brian Beihl, deputy director of Open Democracy, said the message has been clear.

“We’ve done really well,” Beihl said, noting that the article has enjoyed strong support, including in towns that reliably vote Democratic, and in towns that can be counted on to elect Republicans. “It is important to understand that this is not a partisan thing,” he said.

“It’s party leadership that has trouble with fair redistricting. The voters – Republican voters, independent voters, Democratic voters – they see this for what this is, a plea for fair, nonpartisan and transparent redistricting. We don’t want shenanigans,” Beihl said.

Yet, shenanigans is just what happened last time, Beihl alleges. John Lynch, a Democrat, was governor at the time, but the legislature, where the state’s constitution places redistricting authority, was controlled by Republicans. Their plan seemed to run afoul of Article 11 of the NH Constitution, which directs the legislature to appoint a sole representative for each municipality that has enough residents to warrant one – 3,000 in this case. In the plan that was approved a decade ago, more than 50 qualifying towns didn’t have their own representative. Instead, they shared a representative with another community.

For example, NH House District 5 represents Alton and Gilmanton, and has two seats. Both representatives are from Alton, which is the more populous community. District 2 has four seats to represent Gilford and Meredith – towns that don't share a land border and abut only on Lake Winnipesaukee – and three of the four representatives are Gilford residents.

The article circulated by Open Democracy, which requests that the redistricting process give each qualifying town their own representative, has been passed in 10 Lakes Region towns, including Alton, Gilmanton, Meredith and Gilford, and is pending in Tuftonboro and Sanbornton, and will likely be brought before Laconia City Council.

According to Beihl, the measure has been passed in 54 towns and cities, with plans to bring it before 27 more this year. It has only failed in three instances. Each time it passes, Beihl said, it “sends a message… that the public wants fair, nonpartisan and transparent redistricting.

Sandwich passed the article at its town meeting on Saturday. Howard Cunningham was one of the residents who spoke in favor of its passage.

“Our redistricted voting districts are likely to be gerrymandered,” Cunningham said, “The purpose of that is to control the vote. The net effect is to shape the vote, or in extreme cases, to predetermine the vote. It is, for the state of NH, a very serious issue, and I have to wonder whether or not, because the practice diminishes the value of any one’s vote, you have to wonder whether or not this is constitutional. It certainly is, from my point of view, mean-spirited. I don’t mind any party winning a legitimate election. I do mind rigging the election, which is what gerrymandering does.”

Jim McFarlin helped put the article before voters in Meredith. He said that he didn’t encounter much, if any, resistance. “To be honest, this is a very basic voters’ rights, small-d democracy issue.” Meredith had its own, exclusive representation for centuries, and it that was taken away a decade ago. “We lost something important in 2011, we want to restore (it).”

Don House found a similarly easy path in Belmont, where he took up the mantle of transparent redistricting. “It seemed like it didn’t require a lot of convincing,” he said, which was “a little surprising” to him because of the town’s voting record. “Belmont is a very Republican town, but it’s not along party lines, as it turned out. People voted what they thought was fair.”

The result of all those votes might be non-binding, but the message has been received. One of the people who voted in favor of the article in Belmont was Travis O’Hara, a freshman representative in the state legislature, who was appointed to serve on the Special Committee for Redistricting.

As it is his first tour in Concord, O’Hara said he doesn’t know first-hand how the process will work, but he said he is in favor of transparency. “I will be open for people to ask me questions personally,” he said. And, as far as assigning each qualifying town its exclusive representative, “If it’s in the constitution, I’ll follow it,” O’Hara said.