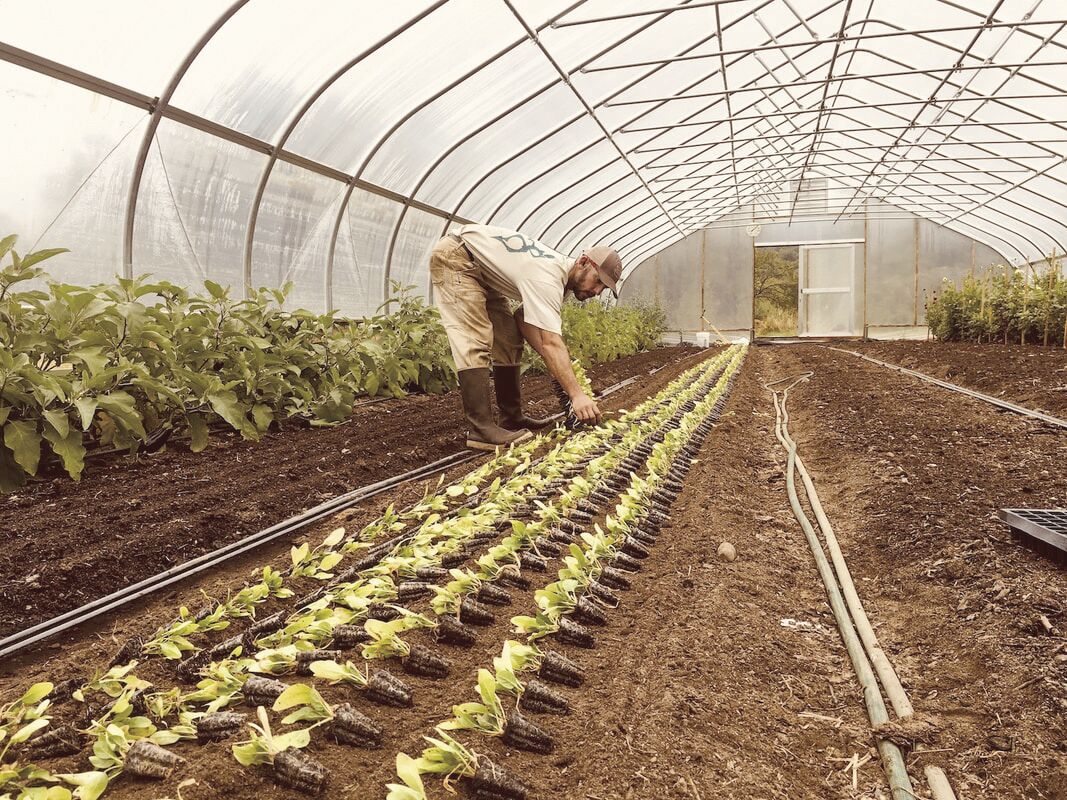 Aaron Lichtenberg of Winnipesaukee Woods Farm in Alton Bay plants winter spinach, which is used by a number of restaurants in the Lakes Region. (Courtesy photo) 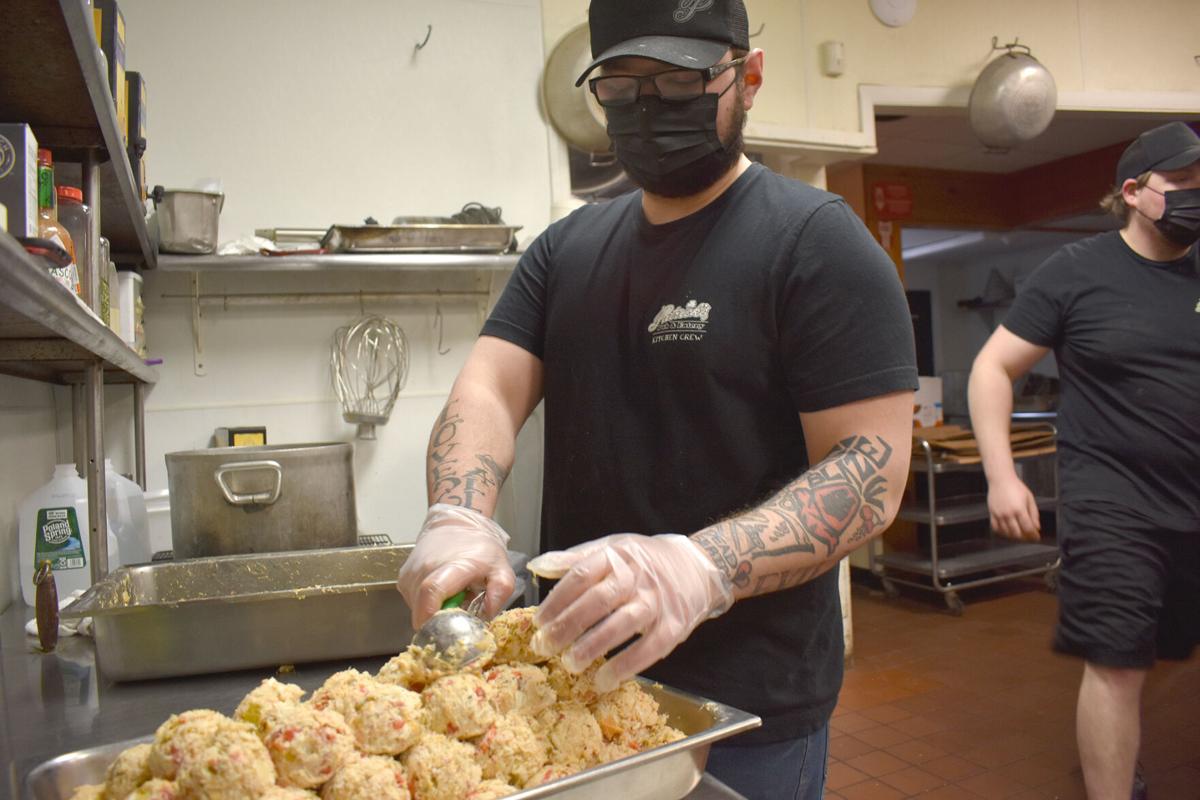 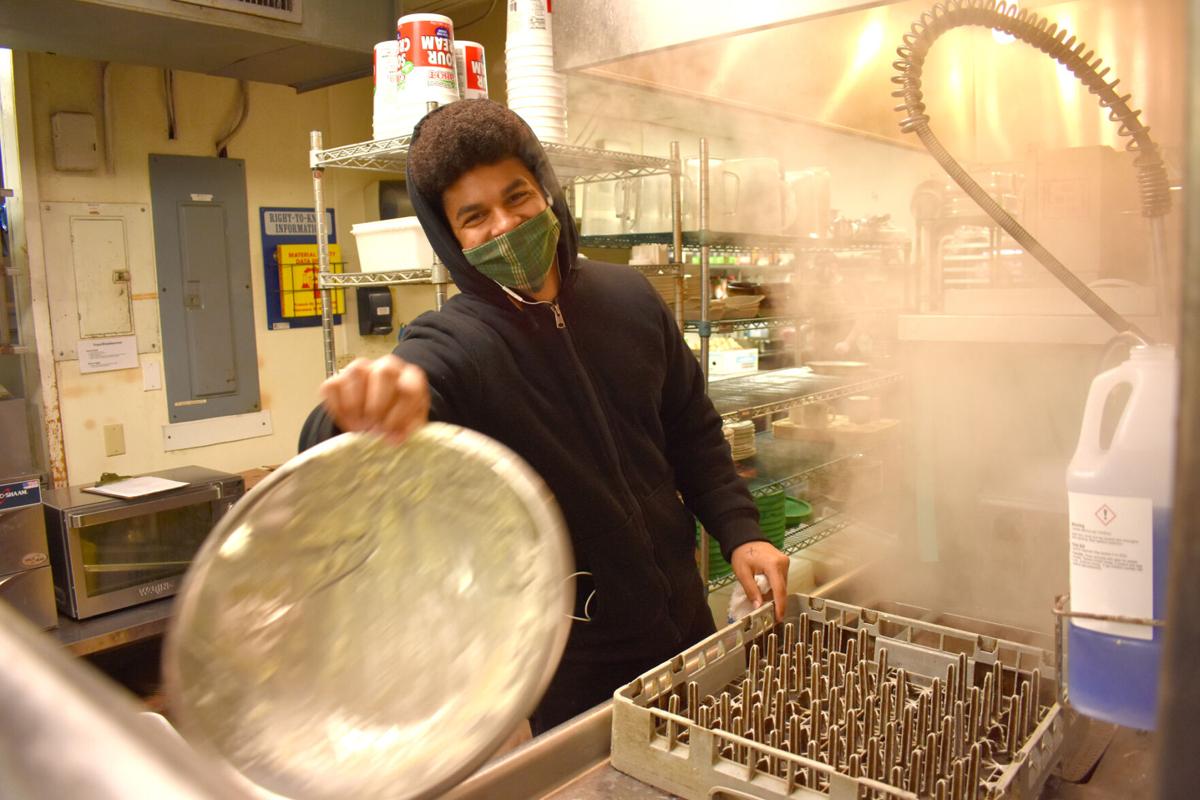 Thaddeus Landeros, dishwasher at Patrick's Pub in Gilford, at work on Friday. The business grew its takeout and delivery business over the past 12 months, and with diners becoming more comfortable with indoor seating, the kitchen might be challenged dealing with both sales streams. (Adam Drapcho/The Laconia Daily Sun photo) 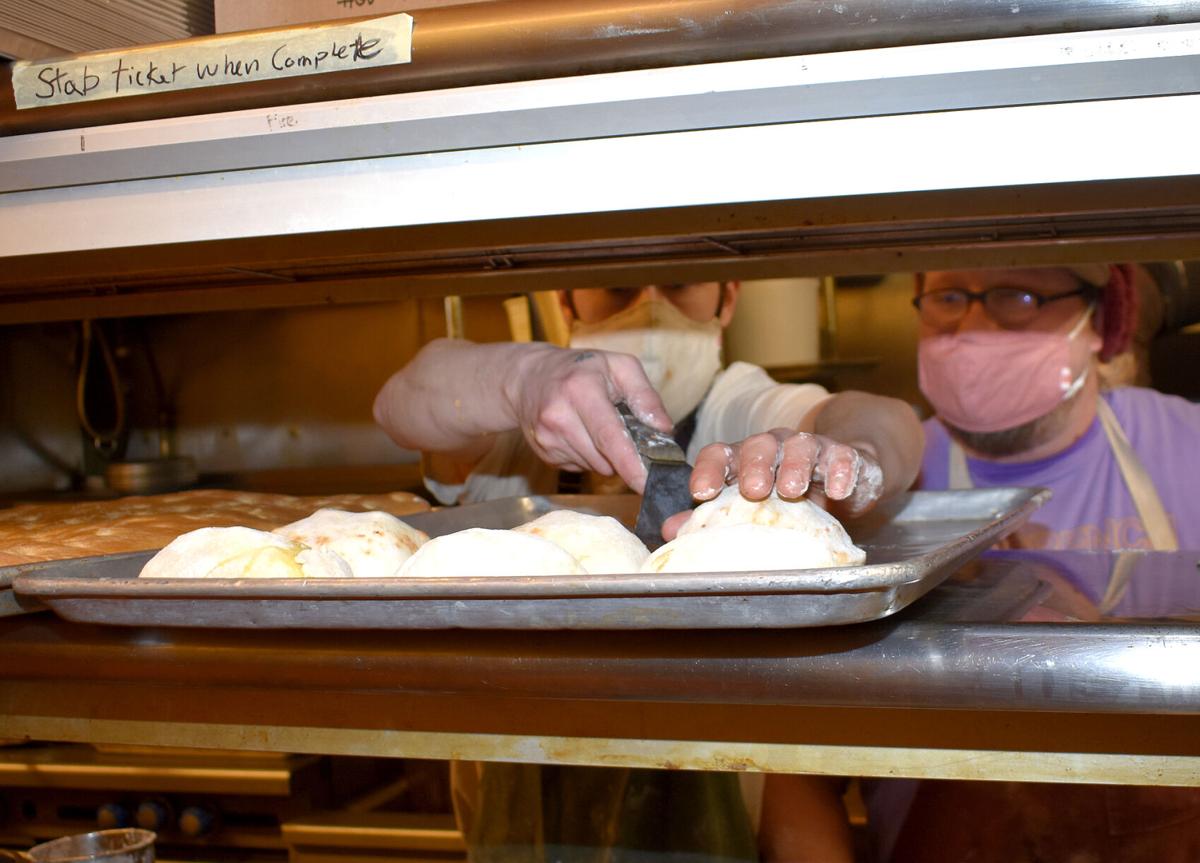 Aaron Lichtenberg of Winnipesaukee Woods Farm in Alton Bay plants winter spinach, which is used by a number of restaurants in the Lakes Region. (Courtesy photo)

Thaddeus Landeros, dishwasher at Patrick's Pub in Gilford, at work on Friday. The business grew its takeout and delivery business over the past 12 months, and with diners becoming more comfortable with indoor seating, the kitchen might be challenged dealing with both sales streams. (Adam Drapcho/The Laconia Daily Sun photo)

Mike Somers, chief executive officer and president of the New Hampshire Lodging and Restaurant Association, doesn’t mince words when he talks about the past calendar year.

“The last 12 months have been the most challenging 12 months in the history of the industry,” Somers said. “Worse than 9/11, worse than any other downturn, terrible.”

To recap, about a year ago all restaurants in the state were ordered to close their doors. When they were able to reopen, it was first for takeout only – which is great if you had a takeout-friendly business plan. Then they could serve diners, but only outdoors. Again, that was helpful to restaurants with outdoor space to set up tables. Then they could seat people indoors, but at 50 percent capacity and with a list of additional safety measures to prevent the spread of the coronavirus.

Restaurants had to navigate all of these obstacles, many of which required investments in new materials and systems, with dramatically reduced revenues.

“They had to reinvent their business,” as Somers put it.

Now, though, those restaurants that survived have reason to hope, he said, as more and more people are accessing vaccines each day, and as daily new infection and death rates continue to decline.

Restaurants are hoping that 2021 will be the year of the rebound, Somers said. Karmen Gifford, president of the Greater Lakes Region Chamber of Commerce, agreed.

“I feel that last year at this time people didn’t know what to expect and they were waiting to experience it,” Gifford said. “Now, with spring approaching, if they’ve made it this far, they’ll make it through. They are looking ahead, and even if nothing changes, the world will open up a little bit in the summer like it did last year. People are a little bit more positive than they were last year. People are ready to dine a little bit more, have an experience with friends. It’s in front of us. The vaccine has made a difference.”

Dine in or takeout?

The shutdown last year came at a particularly inopportune time for Patrick’s Pub and Eatery in Gilford, which typically makes a big deal out of Saint Patrick’s Day. The restaurant had already taken delivery of all of the perishable product it expected to serve when word came from Concord that they wouldn’t be able to throw their usual party.

Allan Beetle, one of the owners, said at one point last year, revenue for Patrick’s Pub was down 80 percent from where it usually would be.

“Slowly, slowly, it regained,” Beetle said. Outdoor seating brought revenue back to 50 percent, then indoor dining a bit more, and at the close of the 12-month mark, he said his business is off only 20 percent of where it normally would be.

“We are really pleased to be only down that much,” Beetle said. He’s feeling optimistic about the coming months, so optimistic that he thinks he might have a new challenge to solve. Prior to the pandemic, his business did a trivial amount of takeout business. That has grown to about a fifth of all sales, and if that sustains while he’s able to regain full dine-in business, his kitchen might struggle.

“One of our questions is, how to accommodate a full restaurant and takeout business,” Beetle said.

Restaurants, especially those that based their business on dine-in sales, had to make many accommodations in order to survive over the past year. Somers said diners should expect that some of those changes might be permanent – and that that’s likely a good thing.

Osteria Poggio’s kitchen never went fully dark. Even when the state said businesses had to shut down, Sweet put out a call to distributors and other restaurants to send him their perishable goods. He, as well as other cooks and chefs who were suddenly out of work, used their time to turn those meats and vegetables into take-home meals for people who were similarly affected by the sudden shutdown.

Sweet put up tables on his restaurant’s grassy lawn for the summer, but when cold weather arrived he switched to takeout and delivery only. It was a slow winter without indoor dining at Osteria Poggio, which allowed Sweet to take his business model back to the drawing board.

When he reopens to dine-in service this summer, returning patrons will notice the changes. The menu, which had always been distinct from conventional Italian eateries on this side of the Atlantic, will have an even greater emphasis on the “Done Different” part of his motto — in some dishes, he is borrowing techniques more commonly associated with Mexican or Asian cuisines, and executing them with Italian flavors and ingredients. He is bringing in a soft-serve ice cream machine, and adding a retail space with prepared food items as well as products from local crafters and artisans.

Other upgrades won’t be as apparent. The website, kitchen flow and ordering system will be streamlined and modernized, and he’s going to keep the take-out, delivery and community benefit aspects of the business that developed during the pandemic.

“It’s the silver lining,” Sweet said. “With everything terrible that’s going on, what can we do to effect positive change?”

When restaurants suffer, so, too, do those who supply them.

Aaron Lichtenberg, of Winnipesaukee Woods Farm, said he was already re-writing his business plan even before the pandemic arrived. He had been leasing land in Alton and was operating primarily as a community supported agriculture operation in which customers sign up for regular pick-ups of whatever he’s picking that week, but a change in land use pushed him to switch to a new plan, which was primarily for value-added products, such as pickles and other preserved foods, and wholesale.

“There’s a good amount of our business now that would have relied on restaurant sales,” Lichtenberg said. Instead, he’s had to improvise ways to either market that produce as is, or turn it into a shelf-stable product that could be retailed at local country stores.

Winnipesaukee Woods is now growing on land in Gilford, and Lichtenberg is looking for a crystal ball he can peek into to see what he should plant, and for whom, in the coming weeks.

“It’s been a crapshoot for 10 months, and it continues to be so. It’s very difficult to plan on volume and what to expect from many of our accounts because they’re in such a tenuous position,” Lichtenberg said. “How quickly are they going to get back to normal?”

He’s not in a position to gamble, so he said the only thing he can do is use his past experience as his predictor.

“Because I don’t know how things will pan out, I can only plan my decisions on historical data – 2020 sales are the only logical way to plan for 2021,” Lichtenberg said.

The New Hampshire Mushroom Company grows its produce in Tamworth and distributes throughout the state, primarily to restaurants and through farmers markets, said owner Eric Milligan.

Both of those markets were shut off like a light switch when the pandemic occurred, Milligan said, but you can’t explain that to mushrooms. His mushrooms take eight to 12 weeks from seeding to harvest, and they have a very short shelf life. Much of those which he picked during the shutdown went to Sweet, for his free community meals. Since the shutdown was lifted, he has been marketing through the farmers markets and restaurants that re-opened, though the demand hasn’t been nearly what it normally would be.

Meanwhile, he had employees that moved on to other careers, so he decided to shut down for the winter and upgrade his systems, which he hasn’t been able to do since he started the business eight years ago, with an improvised system that he expects to last about two years.

When he re-opens, the New Hampshire Mushroom Company will have a greater focus on educating and outfitting the public for foraging for wild mushrooms, and the main office will be turned into a retail space.

“For 2021, we are not going to be doing as much wholesale,” Milligan said, expressing optimism in the face of changing circumstances. “The company needs to pivot. I’m producing a commodity, I’m producing food. As long as I can weather the storm, I’ll pull through.”

Somers said it’s difficult to put a finger on how many restaurants have failed as a result of the pandemic, especially because so many closed temporarily.

“How many of them will become permanent closures?” he wondered, adding that it will probably be another six months to a year before the casualty count can be reported.

In the meantime, he referred to a campaign, rallyfornhrestaurants.com, that lists all of the safety measures that restaurants have adopted, and lists ways that people can support the eateries that they’d hate to see closed.

“It has been a rough stretch. Imagine the stress on an individual when it’s your family’s livelihood at stake,” and that of the owner’s employees, Somers said.

For those who are left standing, Somers said, rewards await.

“Some of the adaptations that they have had to take on, casual fine dining had to launch delivery and takeout models, new technology, had to put all kinds of safety precautions in place, many of them scaled back their menu to make it more streamlined,” Somers said. “These businesses are probably the leanest they can be with the best operational model. Hopefully, as business picks up, they will be primed to bounce back. That is what we’re hoping for.”

WOLFEBORO — In the first seven episodes of Hell’s Kitchen, viewers watched local contestant Nikki Hanna struggle to adapt to the pressure, the…