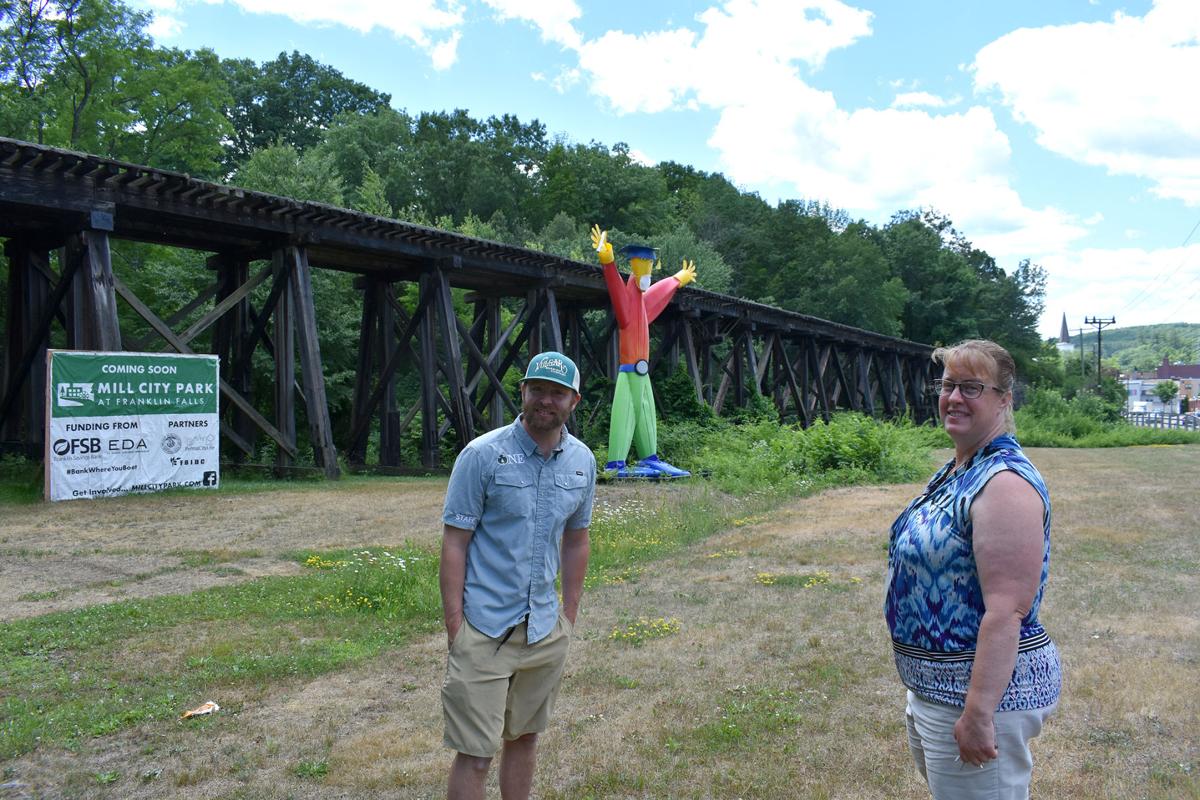 Marty Parichand, of Mill City Park, and Franklin City Manager Judie Milner, stand on land that will soon become developed as a multi-use park and a place for kayakers and surfers to access whitewater features. In the background is "Kayak Man," a sculpture created by Colby Morrill. (Adam Drapcho/The Laconia Daily Sun photo) 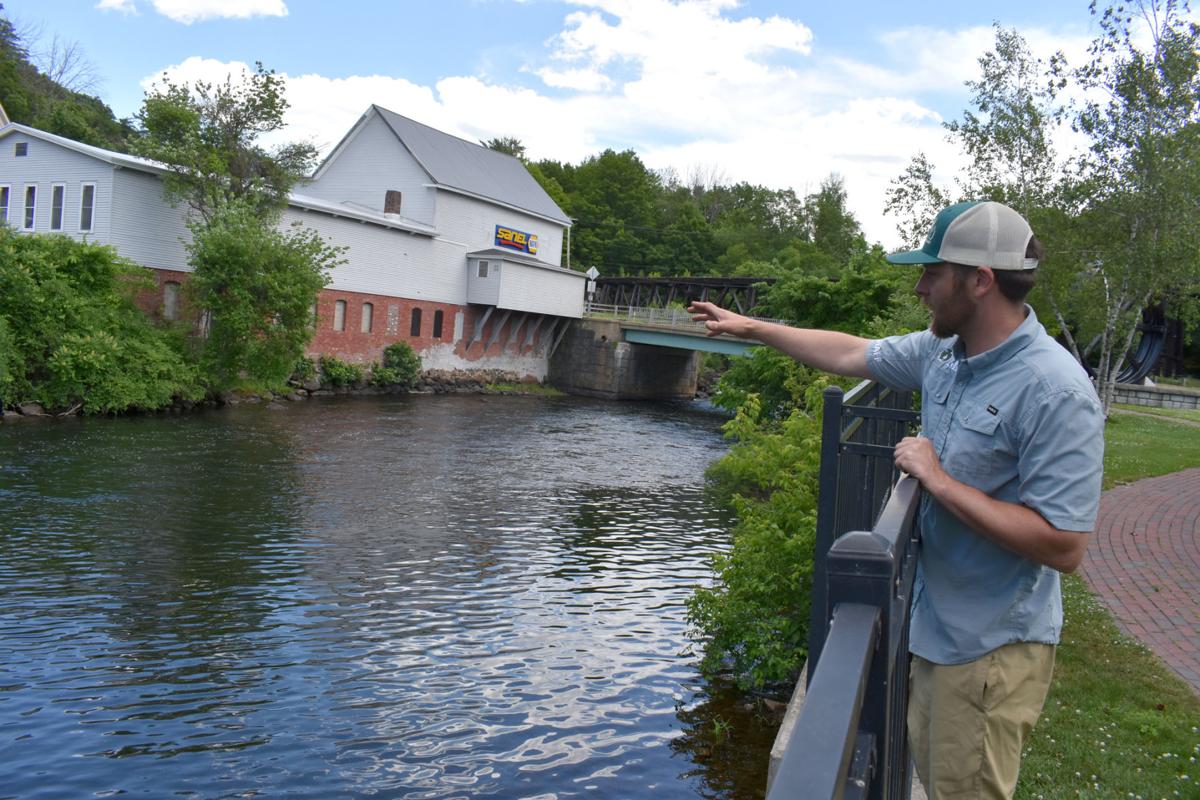 Marty Parichand, of Mill City Park, said the whitewater features that he expects will be created next summer, will bring competition-style kayak tricks to the stretch of Winnipesaukee River that flows past Trestle View Park. (Adam Drapcho/The Laconia Daily Sun photo)

Marty Parichand, of Mill City Park, and Franklin City Manager Judie Milner, stand on land that will soon become developed as a multi-use park and a place for kayakers and surfers to access whitewater features. In the background is "Kayak Man," a sculpture created by Colby Morrill. (Adam Drapcho/The Laconia Daily Sun photo)

Marty Parichand, of Mill City Park, said the whitewater features that he expects will be created next summer, will bring competition-style kayak tricks to the stretch of Winnipesaukee River that flows past Trestle View Park. (Adam Drapcho/The Laconia Daily Sun photo)

FRANKLIN — Several years ago, when Marty Parichand first floated the idea of a downtown whitewater park, it sounded to many like a pipe dream. Earlier this month, the project cleared its final and largest hurdle, and it seems like only a matter of time before Franklin becomes home to an amenity unlike anything else in New England.

That final hurdle, which the nonprofit organization Mill City Park announced on June 3, was a permit granted by the state Department of Environmental Services to change the shape of the Winnipesaukee River bottom in order to create water features that will attract whitewater enthusiasts every day of the year – not just a few days per year when the flow is unusually high, as is currently the case.

Mill City Park has the funding lined up, about $800,000, to create a stretch of whitewater features as the river passes Trestle View Park. This stretch will be for kayakers who will be able to perform tricks – or at least attempt them – while anyone in the park will have a front-row seat.

Parichand said the organization is pursuing another $400,000 in funding to create a wave feature, just upstream of the Route 3 bridge, that will allow for surfing in the river.

Mill City Park is currently interviewing construction companies to perform the work on both features, which Parichand said will likely take place next summer. Each feature will likely require eight weeks of work, and he wasn’t sure if the two projects could take place concurrently or in series.

Either way, come one day in 2021, “You will be able to surf on a surfboard in Franklin 365 days a year, as well as go whitewater kayaking,” Parichand said.

Then there are the dry parts of the project. Mill City Park also has designs for a riverside park, with 13 developed acres and 21 conserved acres, which will contain a viewing area, natural play features, a bicycle pump track, trails and camping sites. A shoreline construction permit is still needed, but, Parichand said, “We’re hopeful that we’ll be able to break ground in late August to September of this year,” on that park.

The city has also received a $640,000 grant from the Department of Transportation to convert the trestle bridge into a footbridge to connect the park to Central Street and the downtown area.

Parichand said there are whitewater parks elsewhere in the United States, but not nearby.

“There’s not one in New England, it will be totally different for this area,” he said.

Mill City Park, once opened, will join an intriguing mix of other nearby outdoor recreation which has developed in the area. The New England Mountain Bike Association has developed a series of 17 trails at the Franklin Falls Dam, and in Northfield, the Highland Mountain Bike Park offers ski lift access to the top of its network of downhill trails, with enough jumps, ramps and banked turns to keep thrill-seekers coming back. For a more sedate experience, there are two disc golf courses in Franklin, and the Winnipesaukee River Trail allows for a scenic jog, walk or bike ride. Franklin is also one of just a handful of communities in the state that still has its own public downhill ski area.

All of those features started to attract a new crowd to the area. There are two new craft breweries – Kettlehead in Tilton and Vulgar in Franklin – a co-working space on Central Avenue, and a developer has started selling luxury condos in the city. Add in the whitewater park, and there’s a buzz of anticipation for Franklin.

“I see hope in this project,” said Milner, who first came to work for the city 11 years ago as the finance manager. She remembered the first time she drove down the hill into the downtown to interview for the position at City Hall. She recalled saying to herself, “‘Wow, this town has great bones,’ but I could tell it’s very poor.”

Franklin developed where it is because of the Winnipesaukee River, Milner said.

“Franklin was a booming mill town,” she said, but that boom went bust about 50 years ago. “Since the 1970s, they’ve been struggling to reinvent themselves,” Milner said. Parichand’s vision is to look again into the river for the city’s new identity.

Parichand, who owns the paddlesports store Outdoor New England, on Central Avenue, is among the newcomers to Franklin. But his vision has been embraced by those who remember the city’s booming days.

Jason Grevior’s family has operated Grevior’s Furniture in Franklin for 90 years. He’s a fly fisherman and he remembers when the three rivers in the city were full of pollution – now, he said, “these rivers are pristine.” Parichand and Mill City Park are right to leverage the city’s most notable natural features.

“This is the best thing that ever happened to Franklin in a long time,” Grevior said. “This is where we’ve got to go.”

With the project about to become reality, Grevior said it has created a “contagious” buzz of momentum.

“We’re going to be a recreation hub of the state,” Grevior said.

LACONIA — Bob Lawton stood next to a poster in Funspot showing a fortune telling machine he once owned.