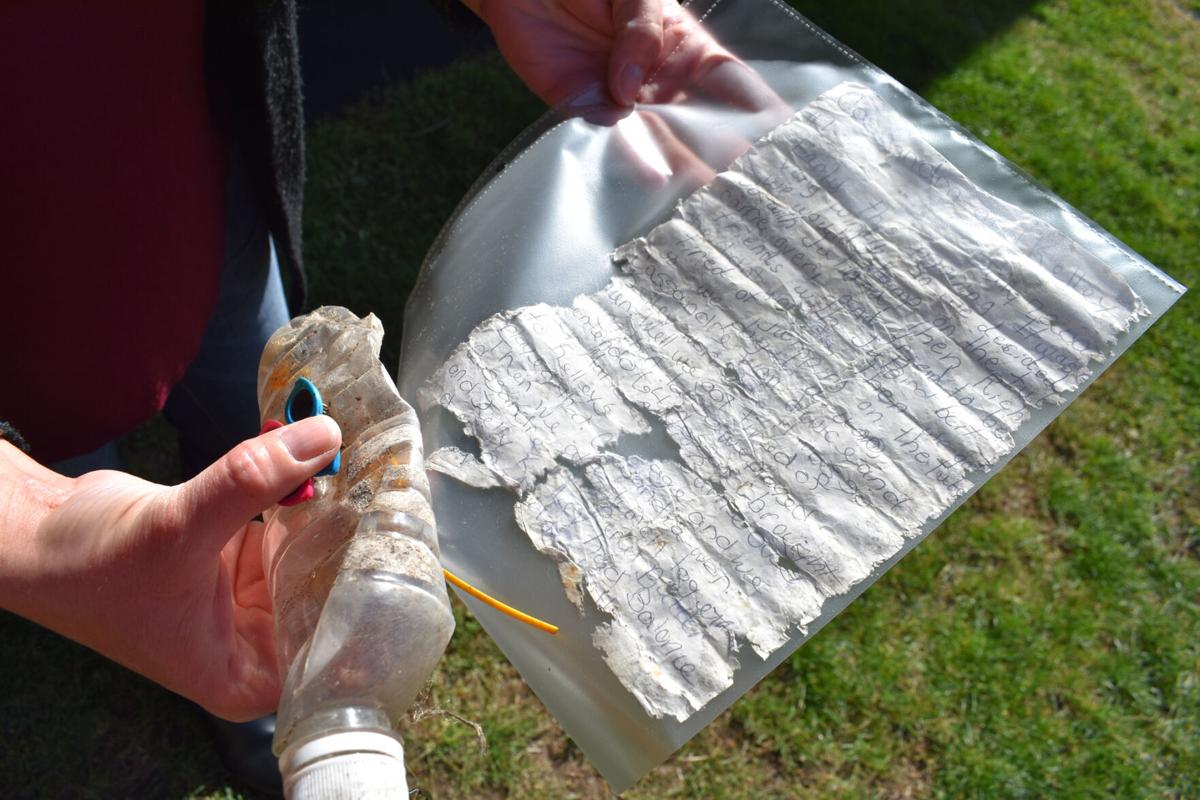 Jennifer White holds the bottle, sunglass pins, string and note that she found at the Silver Sands beach, where they had apparently been buried for 20 years. (Adam Drapcho/The Laconia Daily Sun photo) 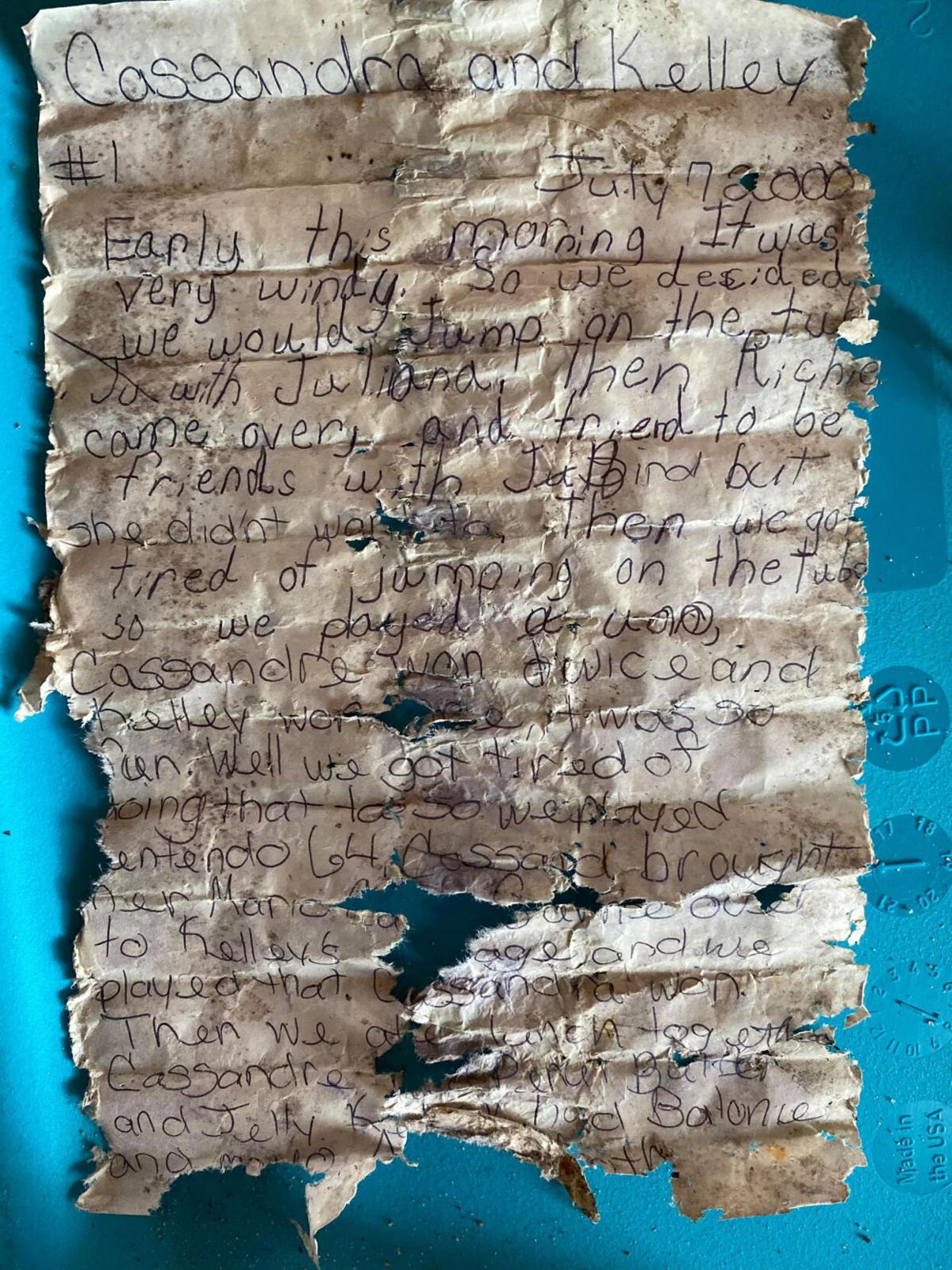 The letter that Kelley (Peck) Guzman and Cassandre Graham wrote 20 years ago, put into a plastic bottle and buried in the sand, was still legible when the general manager of Silver Sands Resort found it this week. The two authors of the letter are still friends today. (Courtesy photo) 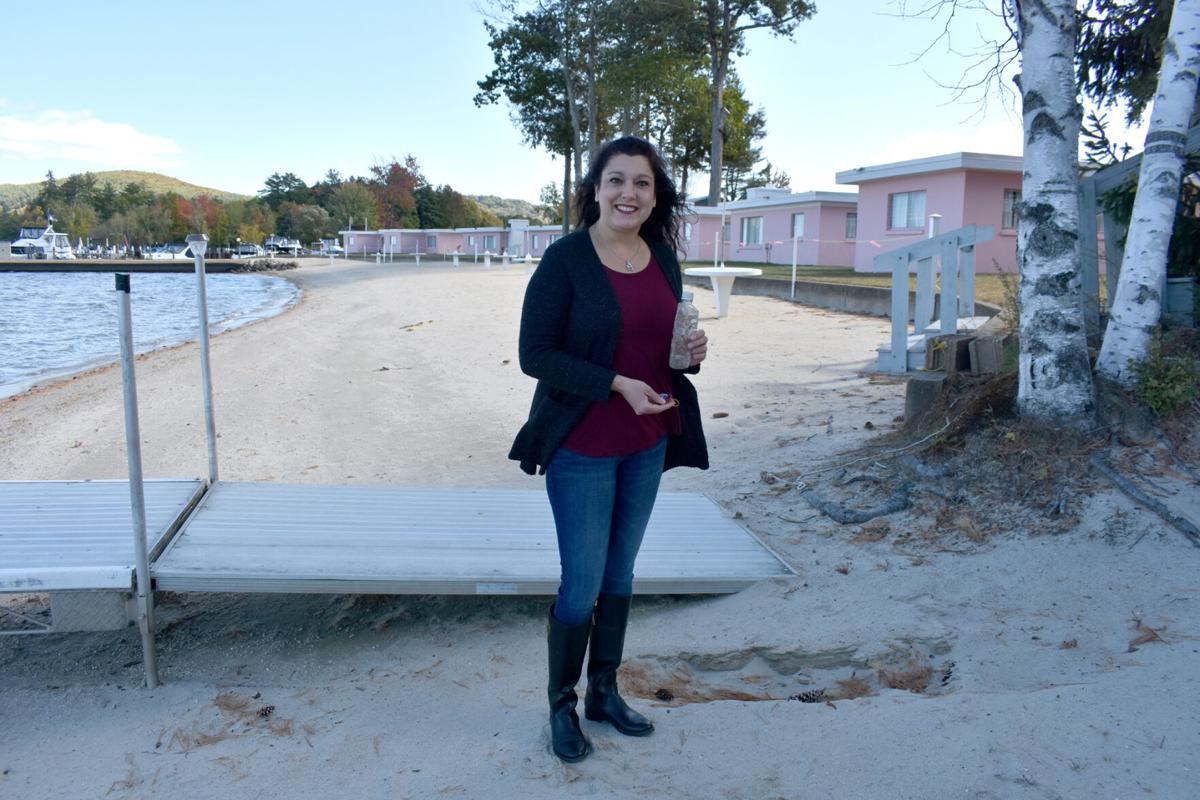 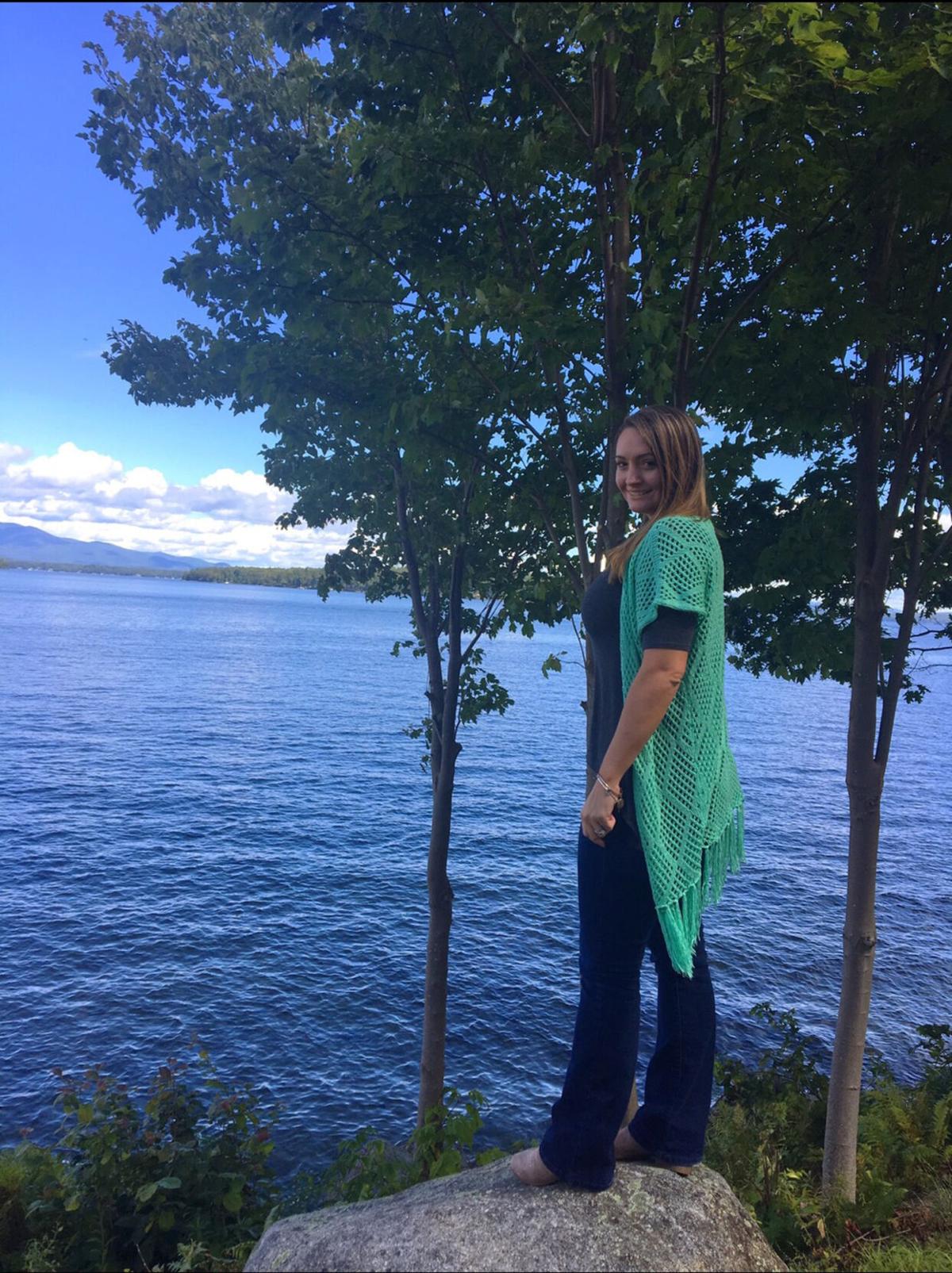 Kelley (Peck) Guzman said she brought her husband to the Lakes Region in 2017, and they have made it a goal to return each summer since. (Courtesy photo) 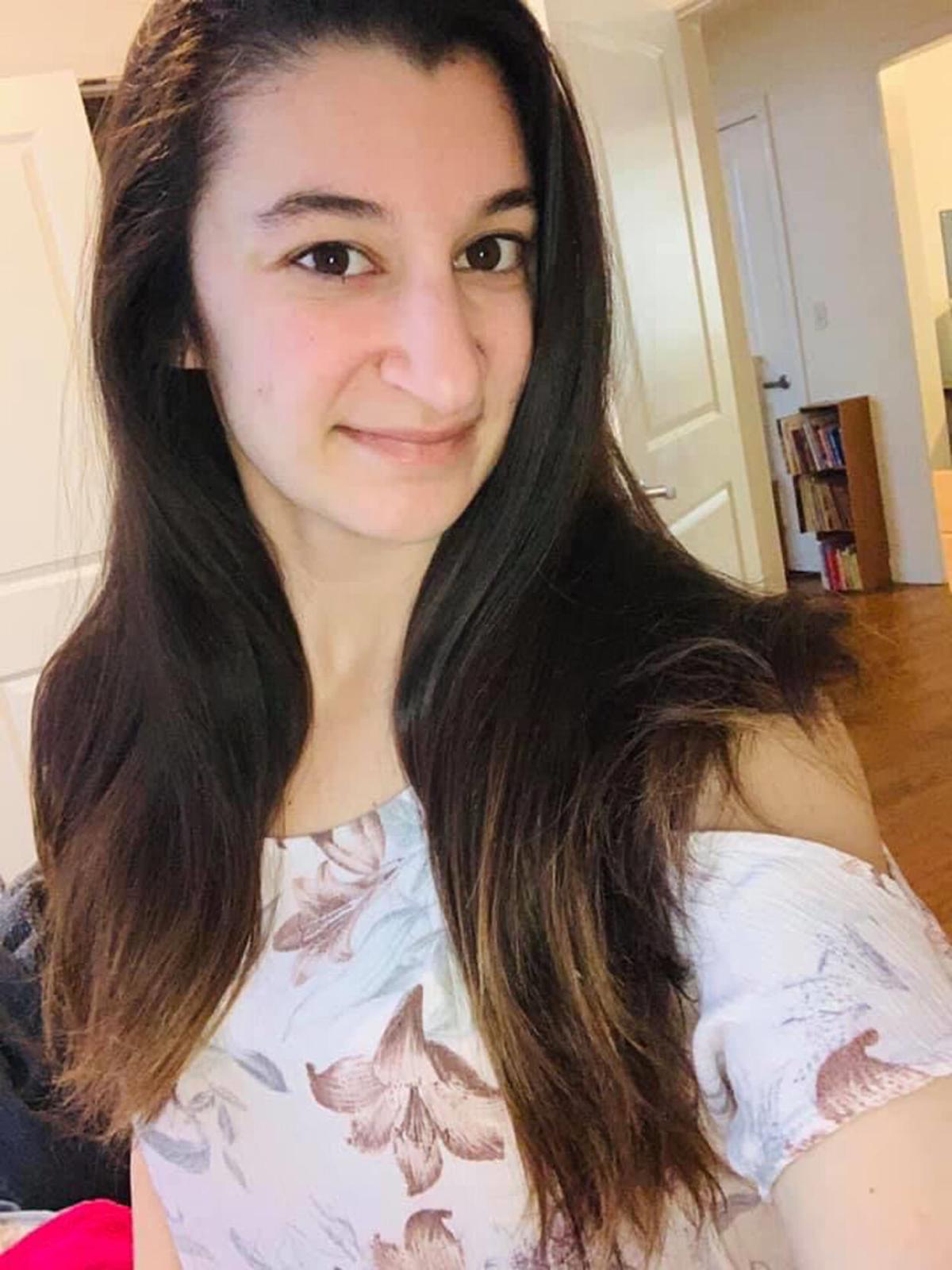 Cassandre Graham said it was "mind-blowing" to hear that the time capsule she and her friend made 20 years ago resurfaced intact this summer. (Courtesy photo) 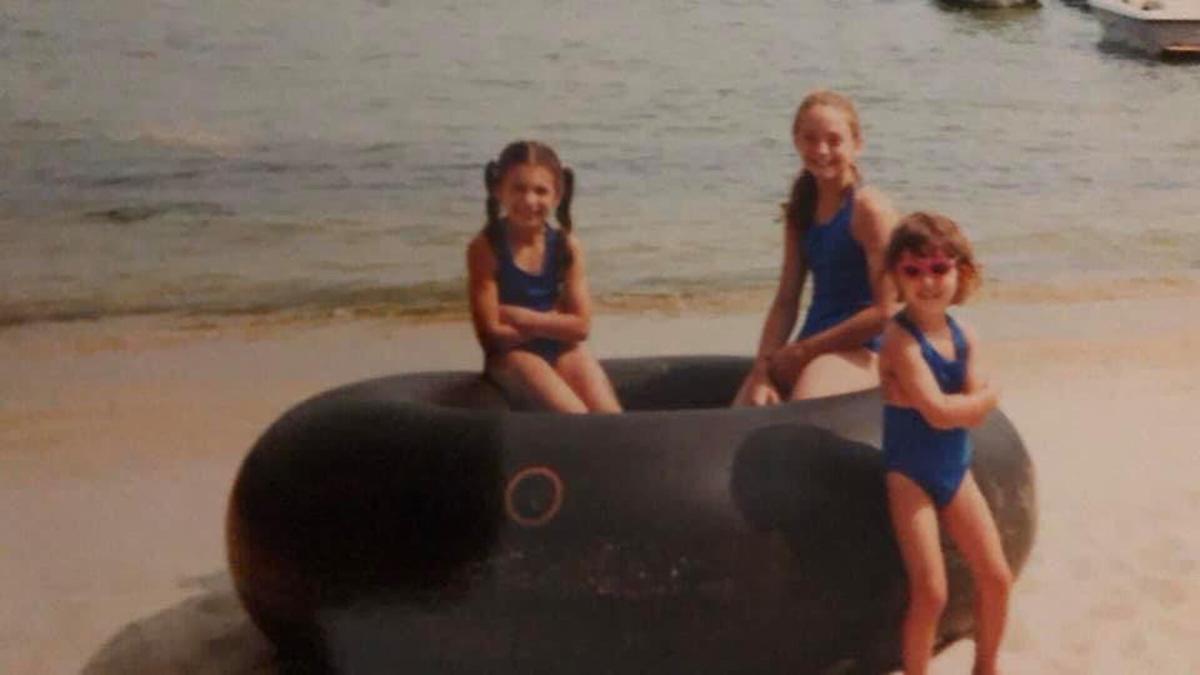 Jennifer White holds the bottle, sunglass pins, string and note that she found at the Silver Sands beach, where they had apparently been buried for 20 years. (Adam Drapcho/The Laconia Daily Sun photo)

The letter that Kelley (Peck) Guzman and Cassandre Graham wrote 20 years ago, put into a plastic bottle and buried in the sand, was still legible when the general manager of Silver Sands Resort found it this week. The two authors of the letter are still friends today. (Courtesy photo)

Kelley (Peck) Guzman said she brought her husband to the Lakes Region in 2017, and they have made it a goal to return each summer since. (Courtesy photo)

Cassandre Graham said it was "mind-blowing" to hear that the time capsule she and her friend made 20 years ago resurfaced intact this summer. (Courtesy photo)

GILFORD — Had it not been for the string, Jennifer White said she might have thrown away the muddy bottle she found this week. Instead, the flash of color caused her to take a second look, and in doing so the yellow plastic cord tethered the present to a childhood day two decades ago.

White, general manager for Silver Sands Resort, said she was performing some end-of-the-season tasks on Wednesday when she discovered something that first struck her as trash: a crumpled plastic bottle, buried a few inches deep in sand.

“We were getting ready to pull the aluminum dock out for the season. I put a shovel in the sand and, lo and behold, this came out,” White said.

The bottle was the kind commonly used to hold 12 ounces of water. The bottle was crushed, but the cap was still firmly screwed closed and, after noticing the yellow string, White saw a few other things inside: two sunglass pins from the NASWA Resort, and a rolled-up sheet of notebook paper, around which the string was tied.

“I thought at first it was a joke,” White said. But when she got the bottle back to her office and carefully emptied it, she unrolled the piece of paper and began to read.

Silver Sands is the kind of place that becomes a tradition for its guests, who often book the same cottage, for the same weeks, every summer. Visitors tend to get to know one another and develop friendships that they look forward to rekindling each summer. The paper White was reading, written 20 years ago, was the product of one such friendship.

The paper started with the words, “Cassandra and Kelley, July 7, 2000.” What followed was an account of the day the two girls had. “Early this morning, it was very windy so we decided to jump on the tube with Juliana, then Richie came over and tried to be friends but she didn’t want to. Then we got tired of jumping on the tube so we played UNO, Kelley won twice and Cassandra won once it was so fun.”

White posted pictures of her find on the Facebook group “Boaters of Winnipesaukee,” at around 1:30 on the afternoon of Oct. 6, and within about an hour she knew the identities of both girls named in the letter.

“I remember the idea of doing the time capsule,” said Kelley (Peck) Guzman, now 31, speaking on the telephone from Daytona Beach, Fla., where she works as an insurance agent and yoga instructor. “I don’t remember where we ended up burying it. I know I wrote the letter because I was the older of the two, and I misspelled her (Cassandre’s) name, so I know she didn’t write it.”

Cassandre was Cassandre Graham, who is now 28 and lives in Westford, Mass., where she works as an early childhood teacher.

The story in the bottle went on. Next up for the girls was Mario Kart, played on Cassandre’s Nintendo 64 (Cassandre won). Then it was time for a lunch break – peanut butter and jelly for Cassandre, while Kelley had “boloney.” After sandwiches, it was back outside for more jumping on the tube, and their day closed by them spending “forever” looking for beads with letters on them.

“We had a good day today and the next time we read this we will be one year older and will remember this forever.”

Guzman, who grew up in Florida, said her family would come to Lake Winnipesaukee for a two-month vacation every summer. She would make friends with other children staying at Silver Sands, but most guests would stay for just a week, maybe two. The Grahams, though, not only stayed for about as long as her family did, they also happened to be in the cottage right next to hers.

Guzman and Graham spent every day together doing, “all the things we talked about in that letter, swimming in the lake, in the pool, playing in the sand, then on rainy days we would all get together and play cards for hours and hours,” Guzman said. Waterskiing was also a frequent activity – Guzman said her dad made it his mission to teach every child at the resort how to ski, and that her brother, Jerry Peck, was a particularly adept skier. “We would do gymnastics and dances on the beach. We would even put on shows for our parents.”

Of the letter, she said, “It all sounded pretty accurate, a typical day.”

Guzman doesn’t spend as much time on the big lake as she did when she was a girl, but she is a member of the Boaters of Winnipesaukee group, and the girls have remained in touch through social media.

“We had such a strong friendship, for several years,” Graham said. “Every year, we would do everything together,” she said, often with her younger sister, Juliana, in tow.

Silver Sands not only gave Graham a lifelong friend, it also gave her brother a lasting relationship; he ended up marrying someone he met at the resort when they were both children. They had the ceremony, naturally, at Silver Sands.

Now, Graham’s parents own a piece of lakeside property, so she can escape to the lake whenever she wants to, and has discovered the joy of giving her daughter the same memories she cherishes, memories which flooded back when she heard about the bottle.

“I really miss those days because I remember how much fun they were. I haven’t seen Kelley in a really long time. Now she’s married, I have my daughter now, so it’s not like I just get up and go see her,” Graham said.

She said it was “mind-blowing” to hear that the bottle had been found, their trinkets and note still intact. “I remember putting it in there. It was crazy that it was found after 20 years. It’s crazy that it didn’t disintegrate or anything.”

Guzman also said she was “shocked” to hear about the bottle, and that, for her, it brought forth a mix of emotions as she thought of all the fun she had with her family all those years ago.

If the bottle survived after 20 years – and both women said they had completely forgotten about it until they saw the Facebook post – could there be yet more buried treasure awaiting White?

“It wouldn’t surprise me,” said Graham.

GILFORD — Boats would have to slow down in Glendale Bay under a request before a state Public Safety Department public hearings administrator.