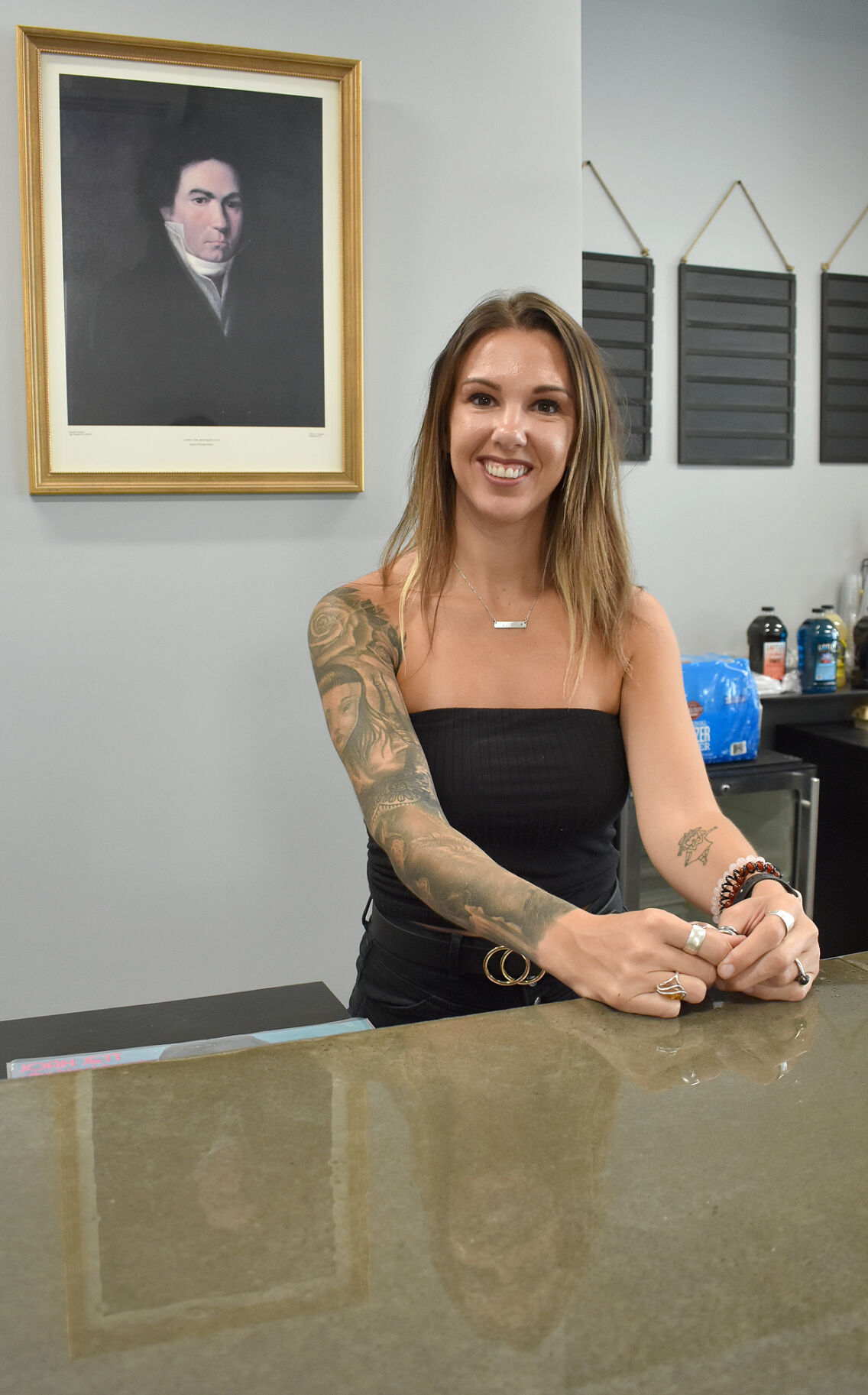 Kristin Bastille's love for music is a family trait, as evidenced by the portait of Ludwig Van Beethoven, which used to hang in her grandmother's home. Bastille hopes to open Defiant Records and Craft Beer on Main Street as soon as licensing allows. (Adam Drapcho/The Laconia Daily Sun photo) 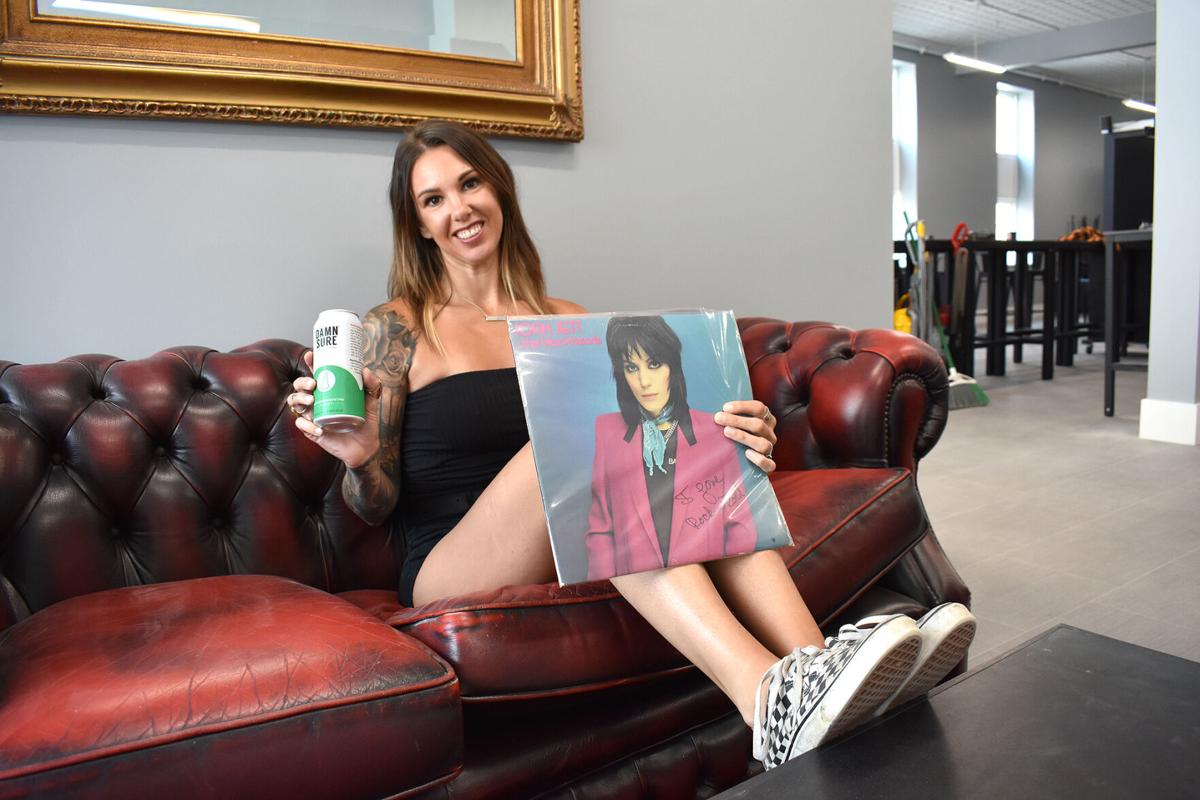 Kristin Bastille's love for music is a family trait, as evidenced by the portait of Ludwig Van Beethoven, which used to hang in her grandmother's home. Bastille hopes to open Defiant Records and Craft Beer on Main Street as soon as licensing allows. (Adam Drapcho/The Laconia Daily Sun photo)

LACONIA — The idea for one of downtown’s new businesses was inspired many years ago, when Kristin Bastille saw the 1995 film Empire Records. It wasn’t until recently, though, that she decided it was time to press play.

Bastille is the operator and one of the owners of Defiant Records and Craft Beer, which she hopes to open next week, once she gets all of her necessary licenses. The shop and taproom will be located in the Colonial Theatre building, at the corner of Main and Canal streets.

“I’ve always had a passion for music and beer,” said Bastille. She made her career in insurance, and when she wasn’t working, she spent her time going to music festivals and visiting breweries.

Along the way, two things happened. Her boyfriend, Mike Testa, who is acting as a silent partner in the business, got her into vinyl records. She said the sound quality of analogue can’t be matched, and that the rest of the experience of handling and experiencing a vinyl album is more satisfying. “It is nice to have something tangible,” she said.

The other thing was watching as downtown Laconia started to shape itself into something new. Bastille grew up in Franklin, and for her early adult years Laconia’s downtown was not the kind of place she found appealing. That’s not the case today, she said.

“I really like what Laconia is turning out to be,” Bastille said. She wanted to be part of a “small business family,” and to continue a trend started by Karen and Reuben Bassett, who started Wayfarer Coffee Roasters and Burrito Me. “They are the pioneers of what is happening in Laconia . . . I want to contribute to it.”

Defiant will have stacks of records for people to thumb through, perhaps while enjoying a glass from her rotating selection of draft or canned beers. She said she will focus on New England breweries, IPAs for sure, but also sours and ciders, as well as craft seltzers. She will also have non-alcoholic root beer on tap.

For food, Bastille said she will offer simple “pub eats.” Soft pretzels, pizza, tots. “Something that goes good with beer,” but not aimed at competing with nearby restaurants. “I’m no Trillium or Local, if you want quality food, you’ll need to go across the street.”

She thinks her storefront will attract people looking for a beer before a show, as well as the vinyl aficionados looking to fill a hole in their collection. And the one might turn into the other, she said. Common, un-collectible records will cost $1, and prices will go up to reflect rarity and quality.

Bastille is arranging a “listening corner,” with a turntable and headphones, for those who wish to hear what music sounds like on vinyl. It’s a different experience, she said, listing Queen’s epic “Bohemian Rhapsody” as an example.

“It has so many moving parts that you don’t hear with radio or on Spotify,” Bastille said. “On vinyl is a whole other level.”

More and more people are making that realization, said Dan Mack, whose business NH Vintage Vinyl has been buying unwanted collections of vinyl and stocking them in places around the state, such as at Greenlaw’s Music, across Canal Street from Defiant. He said he will partner with Bastille and Testa to keep their stacks filled.

“My business locally has been steadily increasing each month,” said Mack. “Greenlaw's has been expanding what they have for vinyl retail space, and in turn that has brought more people into the store to dig as well as kept them in the store for longer.”

He said that vinyl keeps winning more fans, even though it isn’t as convenient as digital streaming services. “Physical media brings you so much more to enjoy than just the music. The artwork, liner notes, and above average sound quality are all things that streaming music cannot deliver on,” he said. He argued that a valuable vinyl album should be considered an investment, one which will continue to hold its value in the eyes of other collectors.

If downtown is changing, Defiant is timing the trend precisely, said Karmen Gifford, president of the Lakes Region Chamber of Commerce. “I think Kristin Bastille’s vision is a perfect fit for downtown Laconia, especially with foot traffic from both the Colonial Theatre and the future events of Chaos & Kindness.” Gifford noted that Defiant will blend retail activity with gathering and socializing. “I’m looking forward to her opening and exploring the great vinyls she has collected. There is an awesome groove enhancing the vitality of downtown Laconia,” Gilfford said.