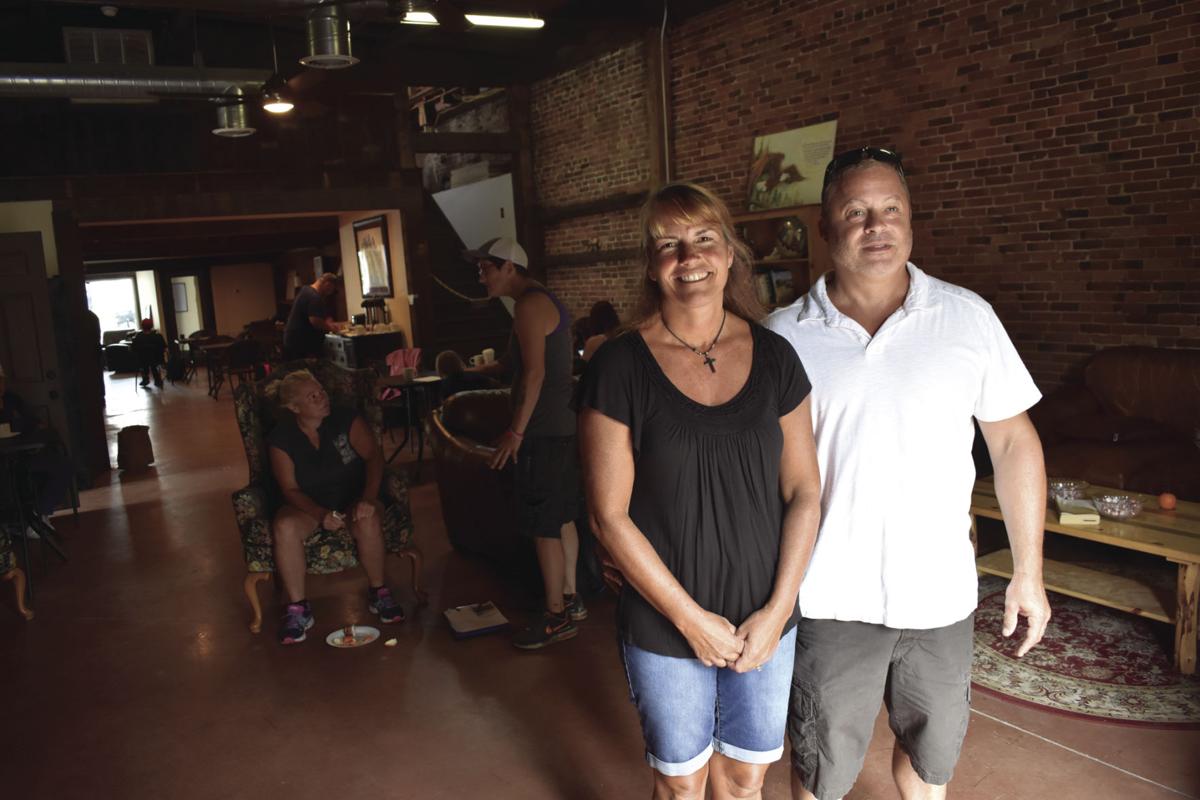 Dawn and Dave Longval opened Isaiah 61 Cafe in June, and have built up a regular crowd of guests. The cafe offers homeless people a meal and a place to feel welcome. (Adam Drapcho/The Laconia Daily Sun) 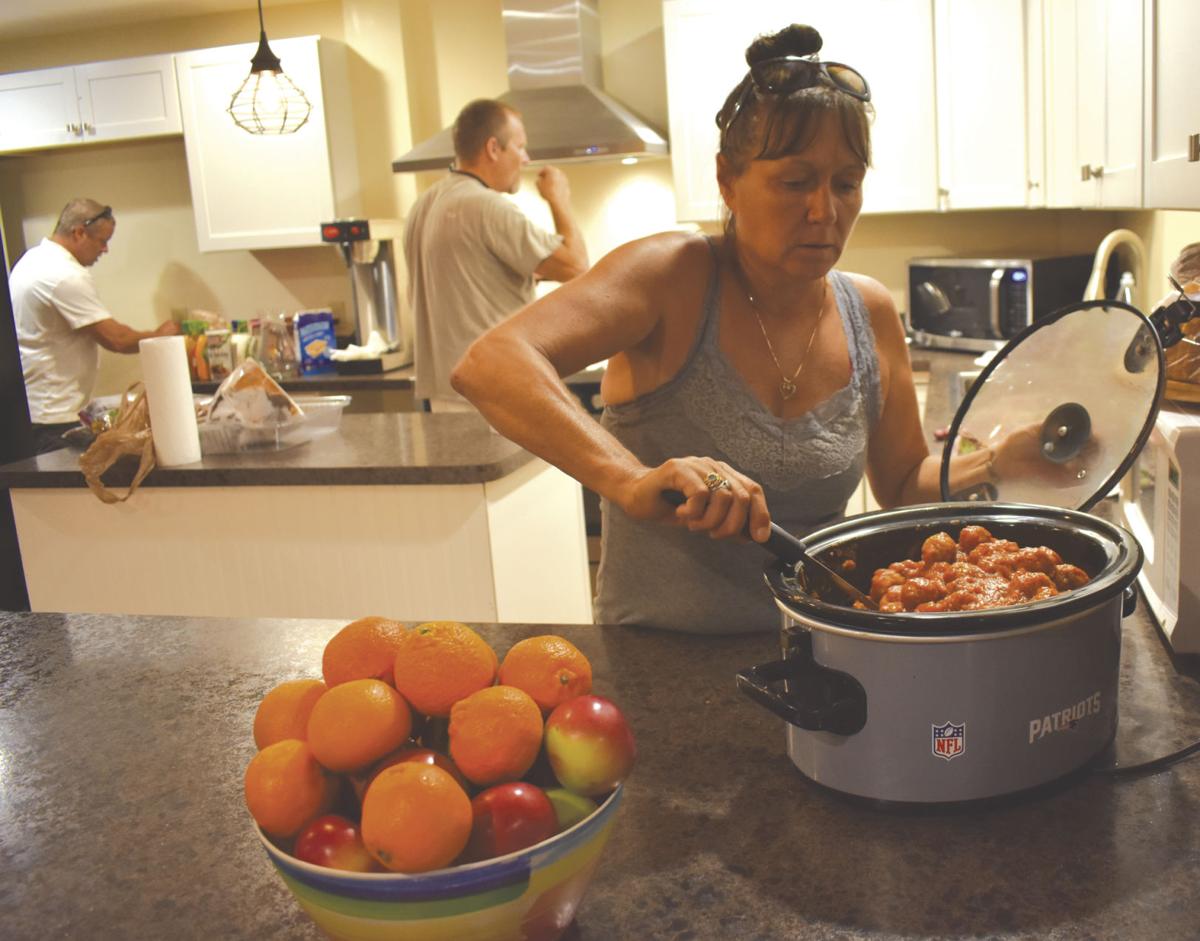 Tricia Sanville stirs meatballs, while, in the background, Matt Therrien tests a noodle. The two volunteers prepared a lunch for the guests at Isaiah 61 Cafe in downtown Laconia. (Adam Drapcho/The Laconia Daily Sun)

Dawn and Dave Longval opened Isaiah 61 Cafe in June, and have built up a regular crowd of guests. The cafe offers homeless people a meal and a place to feel welcome. (Adam Drapcho/The Laconia Daily Sun)

Tricia Sanville stirs meatballs, while, in the background, Matt Therrien tests a noodle. The two volunteers prepared a lunch for the guests at Isaiah 61 Cafe in downtown Laconia. (Adam Drapcho/The Laconia Daily Sun)

LACONIA — If you’re homeless, you can theoretically occupy any public space. But that doesn’t mean you’d feel welcome. But there is now a place downtown where the doors open for six hours, five days a week, and anyone is indeed welcome.

The Isaiah 61 Cafe, located at 100 New Salem Street, is the creation of Dawn and Dave Longval, who started the cafe to reach out to people who, in some cases, don't feel welcome anywhere else.

Both of the Longvals grew up in Amherst and lived all over southern New Hampshire, where she pursued a career in public accounting and he built a business-to-business marketing company. They also found time to have six children over a 10-year span. Then, in 2012, they bought a summer place and some rental properties in the Lakes Region, and for the past three years have been year-round locals.

As they got to know their new home, Dawn said, she thought of the 1269 Cafe in Manchester, which provides food and a space for people struggling to survive through day-to-day life.

“I said, you know what, Laconia needs this,” Dawn explained. Driven by Christian faith, she began to connect with Laconia’s homeless population by bringing her guitar, coffee, bottles of water and sandwiches to public spaces where homeless people congregate. Once a week, starting in May of last year, she began to develop a rapport with her new friends, and a handful of people grew to a dozen and beyond.

“As I saw these people and got to know them, I said, we need a building, we need a home for them,” Dawn said.

She and Dave closed on the New Salem Street building in January and spent the next five months giving it a “major renovation.” When the Isaiah 61 Cafe opened in June, it offered all who entered hot coffee, fresh fruit and bagels for breakfast and comfortable furniture to sit in until lunch is ready. On a busy day, about 50 people will visit.

Isaiah Cafe is about more than food, though. In fact, the Longvals don’t want their guests to think of it as a food pantry or soup kitchen. It also has two bathrooms with showers, laundry facilities and lockers for people to keep their valuables – such as prescription medication – secure.

There’s still more work to do. The building will need a new roof and the brick exterior is in need of repair. Dave is also renovating a second floor so that he can move his office there and they can hold Bible studies and life skills workshops there.

“We knew we didn’t have everything in place, but we knew our friends needed a place where they were wanted in the city,” said Dave.

Isaiah 61 Cafe, which opens at 10 a.m. and closes at 2 p.m., Monday through Friday, fills some basic needs – hygiene, food and water – but is really aimed at a deeper need – a sense of belonging and self-worth.

“Obviously, they have issues. Addiction, mental illness, incapable of taking care of themselves,” said Dave. “What we do is love them, persuade them to get into rehab, that this isn’t God’s plan for their life.”

But if the person isn’t interested in rehabilitation, or experiences a relapse, or even if they show up under the influence, the Longvals will only turn them away if they present a danger to others in their current state. Their only rule is that there’s no drinking or drug use on the property.

“When you continue to love them, that’s what keeps them going,” Dawn said, as she prepared to throw a baby shower at the cafe.

“They’re incredible people in a bad rut in their life,” Dave said. “If people would take the time to get to know them instead of judging them, they would see that they’ve had a hard life.”

Isaiah 61 is an all-volunteer operation organized as a nonprofit. Right now, the proceeds from Dave’s business, Concept Communications, are keeping the cafe going. The Longvals, with their board of directors, are looking to build a network of supporters to keep the operation sustainable.

Sipping a cup of black coffee and eating a banana, Wayne Otis said the Isaiah Cafe offers a place to relax without harassment, where he can come to catch up with friends without worrying about being told to move.

“It gives homeless people a place to congregate, be safe, have something to eat. I can’t tell you what it means to me,” he said. “These are good people that do this.”

Laconia woman on a mission of warmth

LACONIA — Deb Calley, 67, is at a place in her life when she isn’t putting up with it any more. A few years ago, when she saw a man and a chil…

There needs to be so many more businesses such as this in Laconia !! I used to run Lydia's Thrift Shop downtown on the Busy Corner a number of years ago. Keep up the great workk!! May God truly blessed you and all those whom you will serve!!

You guys are angels! 🙂