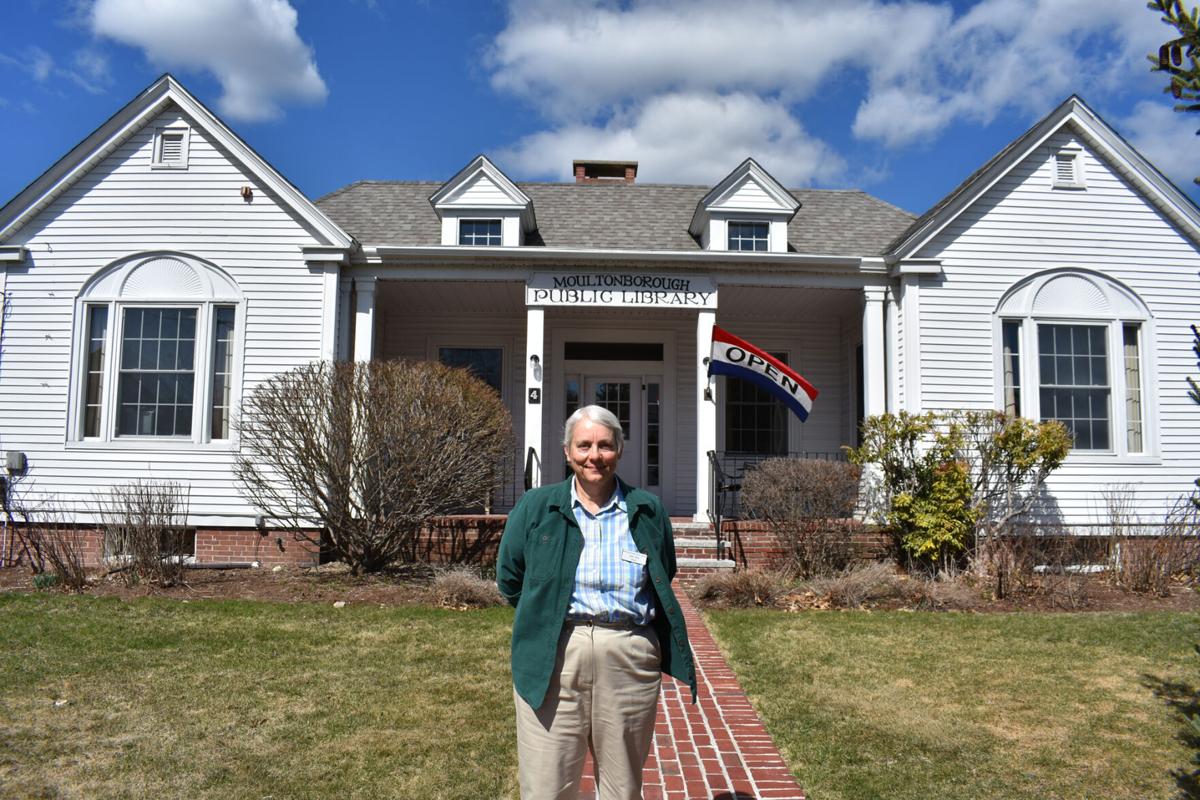 An open house will be held at the Moultonborough Public Library on Friday afternoon, April 9, to honor 38 years of service by Jane Rice. She is shown here in front of the original portion of the library, which has quadrupled in size since she started working there in 1983. (Adam Drapcho/The Laconia Daily Sun photo) 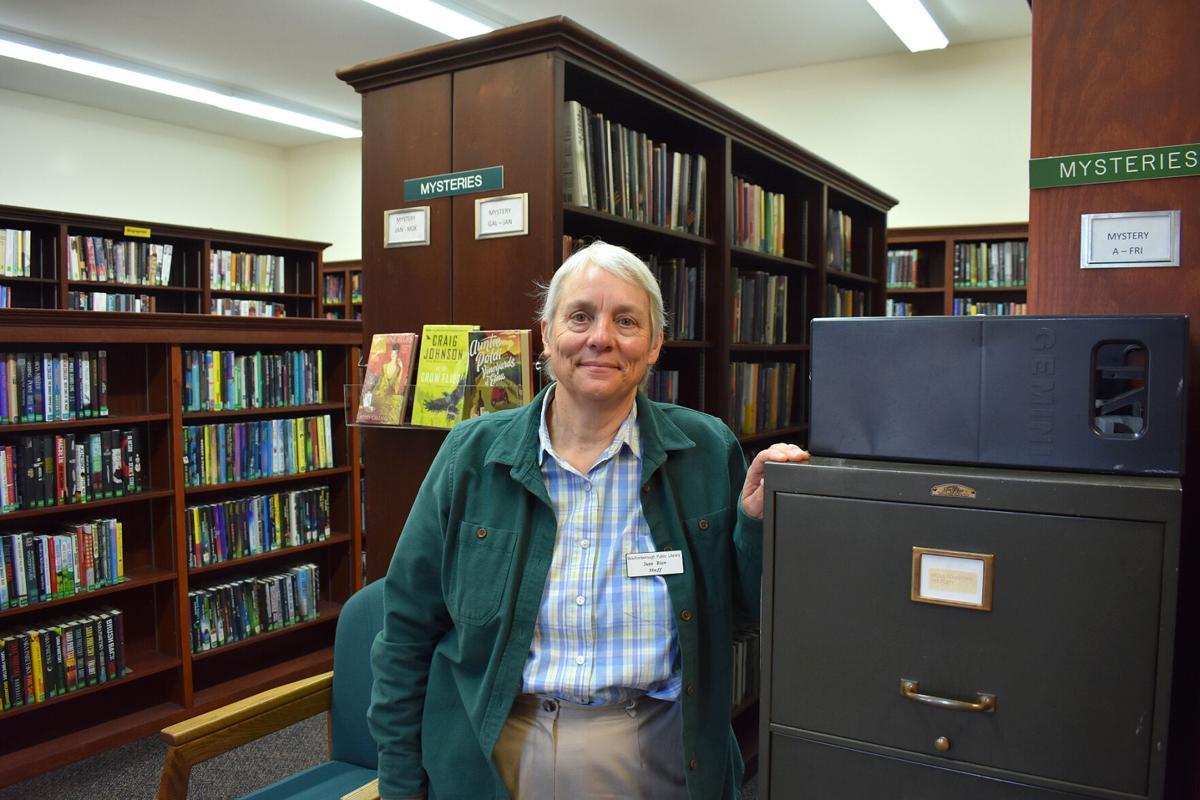 Jane Rice, who has worked at the Moultonborough Public Library for 38 years, is retiring. She is shown here in the Mystery section, a personal favorite, as well as a file cabinet of local history, of which she has become an expert. (Adam Drapcho/The Laconia Daily Sun photo)

An open house will be held at the Moultonborough Public Library on Friday afternoon, April 9, to honor 38 years of service by Jane Rice. She is shown here in front of the original portion of the library, which has quadrupled in size since she started working there in 1983. (Adam Drapcho/The Laconia Daily Sun photo)

Jane Rice, who has worked at the Moultonborough Public Library for 38 years, is retiring. She is shown here in the Mystery section, a personal favorite, as well as a file cabinet of local history, of which she has become an expert. (Adam Drapcho/The Laconia Daily Sun photo)

MOULTONBOROUGH — In 1983, Jane Rice had been working a string of part-time or seasonal jobs for years. A Laconia High School grad, she went to college for history and English, then found work at summer camps, at the NASWA Resort, for archaeologists digging at The Weirs, and wrapping Christmas presents for residents of the Laconia State School. Then she saw an opening at the Moultonborough Public Library, and the run-on sentence of her work experience finally found its period.

Today, April 9, is Rice’s final day after 38 years of serving as the town’s librarian. In her nearly four decades, she has seen the library grow and grow some more, to the point where she said it’s more essential to the community than ever. This afternoon, from 2 to 5 p.m. – and with a special recognition planned for 4 p.m. – the community is invited to the library to celebrate Rice and her retirement.

Compared to its current operation, there wasn’t much to the Moultonborough Public Library in 1983. There were two part-time employees and the building was only open to the public for a total of 15 hours each week.

“When I started it was just books, then magazines and maybe some vinyl records,” Rice said. “It just gradually increased.”

Through a series of expansions, the library is now about 7,000 square feet, which is four times its footprint 38 years ago. Staff has tripled, to six, and hours of operation have also multiplied, to 52 per week.

Library patrons have many more offerings to fill those hours with, as well.

“If anything, I think we’re a more essential part of the community because we offer so much more,” Rice said. “Now, we have so many programs. We have online programs and computers and photocopying and technology assistance, all these things that weren’t invented in the 1980s.”

To her, the programming list all adds up to one thing: community.

“I feel like we’re a true community center. We welcome everybody and offer the services that we feel that people are going to need, computers and printed books, movies, online services. Also, because it’s a welcoming place where everybody can come,” Rice said, “if you come to the library, you’ll meet people.”

It’s her love of books that attracted her to the job in the first place, and it’s that same love that has kept her in the job. She’s partial to mysteries and nonfiction, but her greatest professional joys come in finding the books that spark another’s interest.

Inter-library loans are a particularly enjoyable challenge, and the tweedier the better. A scientist at the nearby Loon Center might need a scientific research publication, and Rice said she relishes the “detective work” that is sometimes needed to track it down.

“I can find articles they need to help our loons have a successful year,” Rice said.

She also appreciates the value of a good beach read, and another of her professional achievements – the library’s annual book sale – helps supply those by the thousands.

“It all started as quite a small thing,” Rice said about the book sale. At first, it was a couple of tables of donated books set out on the front lawn to tempt people waiting for the Fourth of July parade. Now it’s the kind of thing that bibliophiles mark on their calendar: Between 900 and 1,000 boxes of books, arranged on 60 tables in the parking lot.

“We make a lot of money for the library,” Rice said, but by the sound of it, she would likely still hold the sale even if it didn’t bring in a dime. “It’s really satisfying to see so many people who really love books, walking out from the tent with an armful of books that they are going to enjoy.”

How will she spend her retirement? By not working, to start with.

“I plan to have a whole summer to myself. When the patrons come in and say what a nice day it is, I will be out there with them instead of in front of the computer, probably swimming, kayaking and enjoying the lake” she said. She has also signed up to build loon nests and plans to put her boat in the water early. “Next winter, we’ll see. I’ve hesitated to retire because I worried I would be bored stiff in the winter, but I’ll think of something.”

SANBORNTON — With one of the state’s first farmer’s markets, an historic tavern, a gazebo for band concerts and a library where everybody know…