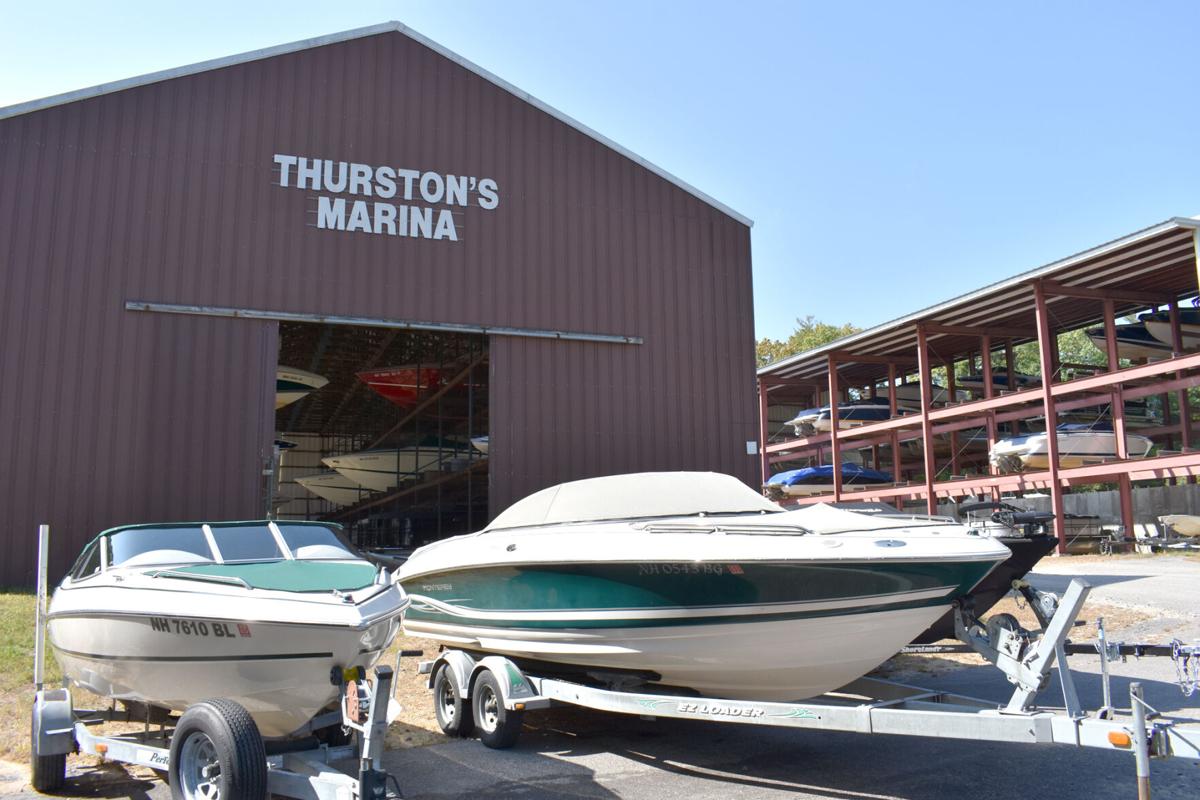 Much of the eight acres that Thurston's Marina sits on is dedicated to boat storage. (Adam Drapcho/The Laconia Daily Sun photo) 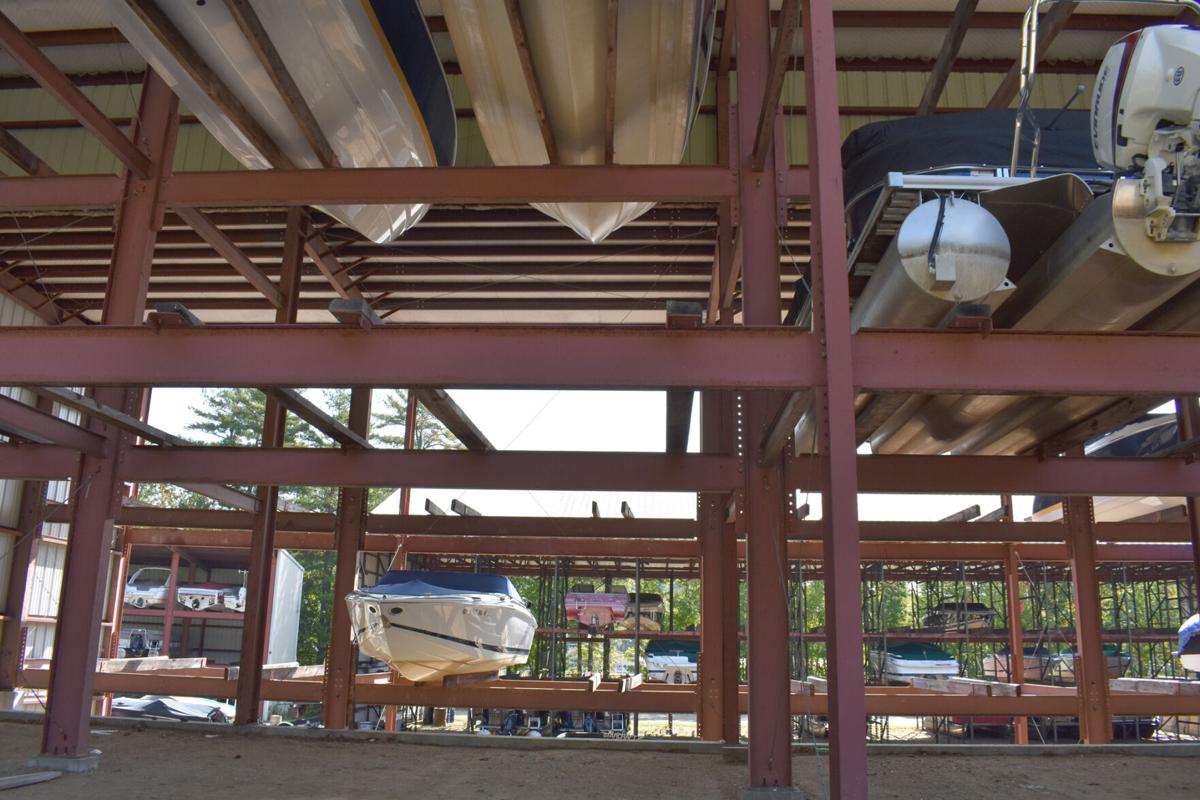 The storage racks at Thurston's Marina are filling up quickly. The business will store up to 500 boats this winter. (Adam Drapcho/The Laconia Daily Sun photo) 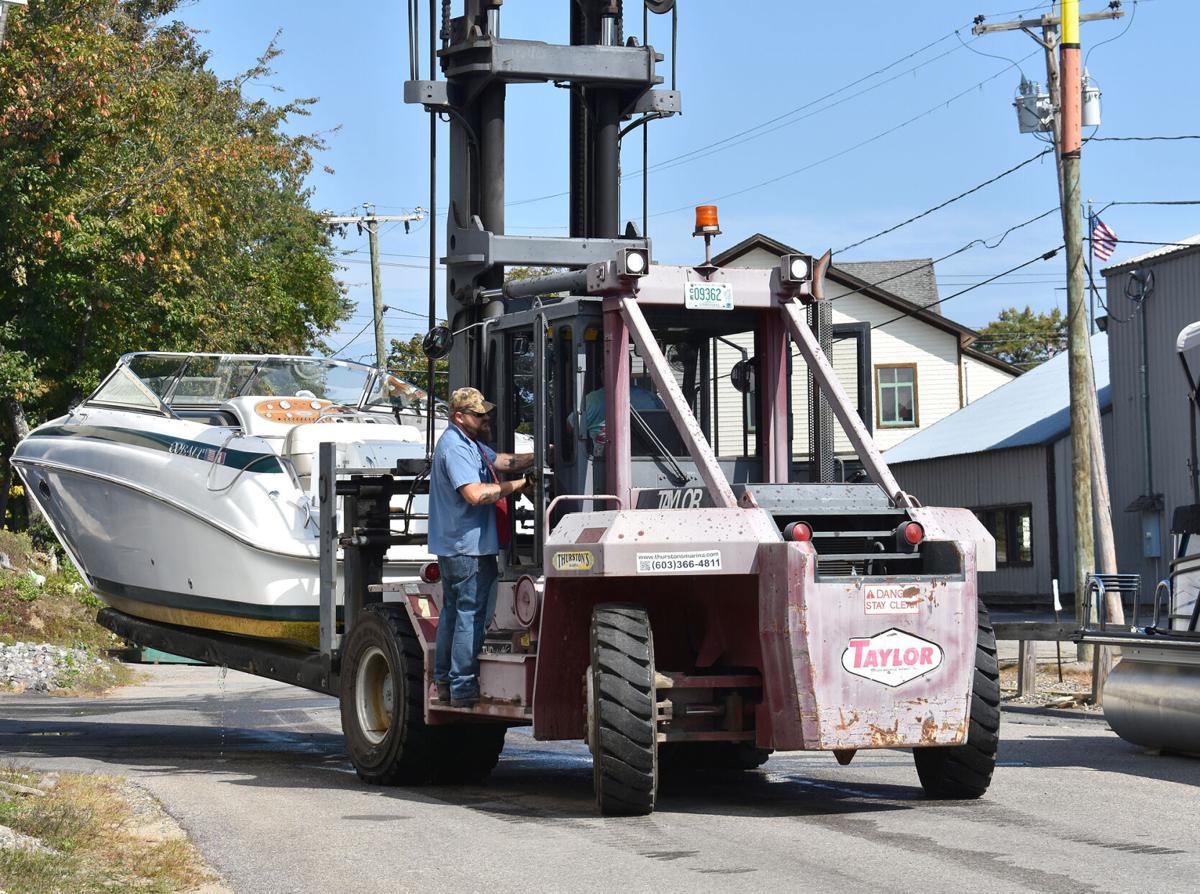 Nick Blais rides on the running board of a forklift operated by Nick Thurston at Thurston's Marina, as they move a customer's boat into a service bay to prepare it for winter storage. (Adam Drapcho/The Laconia Daily Sun photo)

Much of the eight acres that Thurston's Marina sits on is dedicated to boat storage. (Adam Drapcho/The Laconia Daily Sun photo)

The storage racks at Thurston's Marina are filling up quickly. The business will store up to 500 boats this winter. (Adam Drapcho/The Laconia Daily Sun photo)

Nick Blais rides on the running board of a forklift operated by Nick Thurston at Thurston's Marina, as they move a customer's boat into a service bay to prepare it for winter storage. (Adam Drapcho/The Laconia Daily Sun photo)

LACONIA — Columbus Day is still more than two weeks away, but people are busy taking their boats out of the water before the season-ending holiday.

Don Thurston of Thurston’s Marina at The Weirs said drought conditions are speeding up the process.

“We’re actually having a unique problem this year,” he said. “We’re being forced into accelerating our storage rate because the lake is down about 2 feet.

“Some of the boats are sitting on the sand at docks. We’ll have to have all the boats off the lake very soon.”

Some people bring their boats in for winter storage, while others schedule a pickup. It can be difficult to remove a boat from the lake if there isn’t adequate water under the vessel.

“Handling two tons of boat sitting in the mud is like trying to get an elephant out of a mud hole.”

Once the boat is at his storage facility, it is winterized and then placed into a storage rack.

The winterization must occur quickly. A freezing night could damage a boat’s engine if it hasn’t been properly prepared for storage.

“It takes time to winterize the motors,” Thurston said. “It’s a crazy fire drill. We never have enough people this time of year.”

He has an 8,000-square-foot heated service area for working on boats and making any needed repairs or modifications.

Thurston’s Marina has the capacity to store almost 500 boats.

Irwin Marine in Laconia can store 2,200 boats in facilities around the state.

Bill Irwin said the low water requires cautiousness but that there is still some good boating and warm temperatures in store before the weather turns cold.

Boat sales were good this season, he said.

“I believe people wanted to be outside, enjoy nature, family and selected friends and could do that on the lake, with boating,” Irwin said.

With increased boat sales comes increased demand for boat storage, and new facilities have been built in recent years, with more in the planning stages.

According to the National Marine Manufacturers Association, new powerboat retail sales have climbed since reaching record highs in May. They were up 22 percent in July compared to the same month a year ago.

The organization’s latest New Hampshire statistics are from last year, when new powerboat retail sales were up 2 percent over 2018. These sales have been increasing in the state for the last four years. Total marine expenditures for new powerboat, engine, trailer and aftermarket accessories totaled $209.5 million in New Hampshire last year.

Now that it’s the time of year for people to put away their boats, a little sadness can set in, but Bill Irwin points out it won’t last forever.

“One of the best days of the year is when people put their boats back in the water in the spring. People will look forward to it. Spring is right around the corner.”

Boating experts say it's time to call it a season

It has been a great season for boating – and if you need a second opinion, head to a local marina and ask to see all the empty space in their …