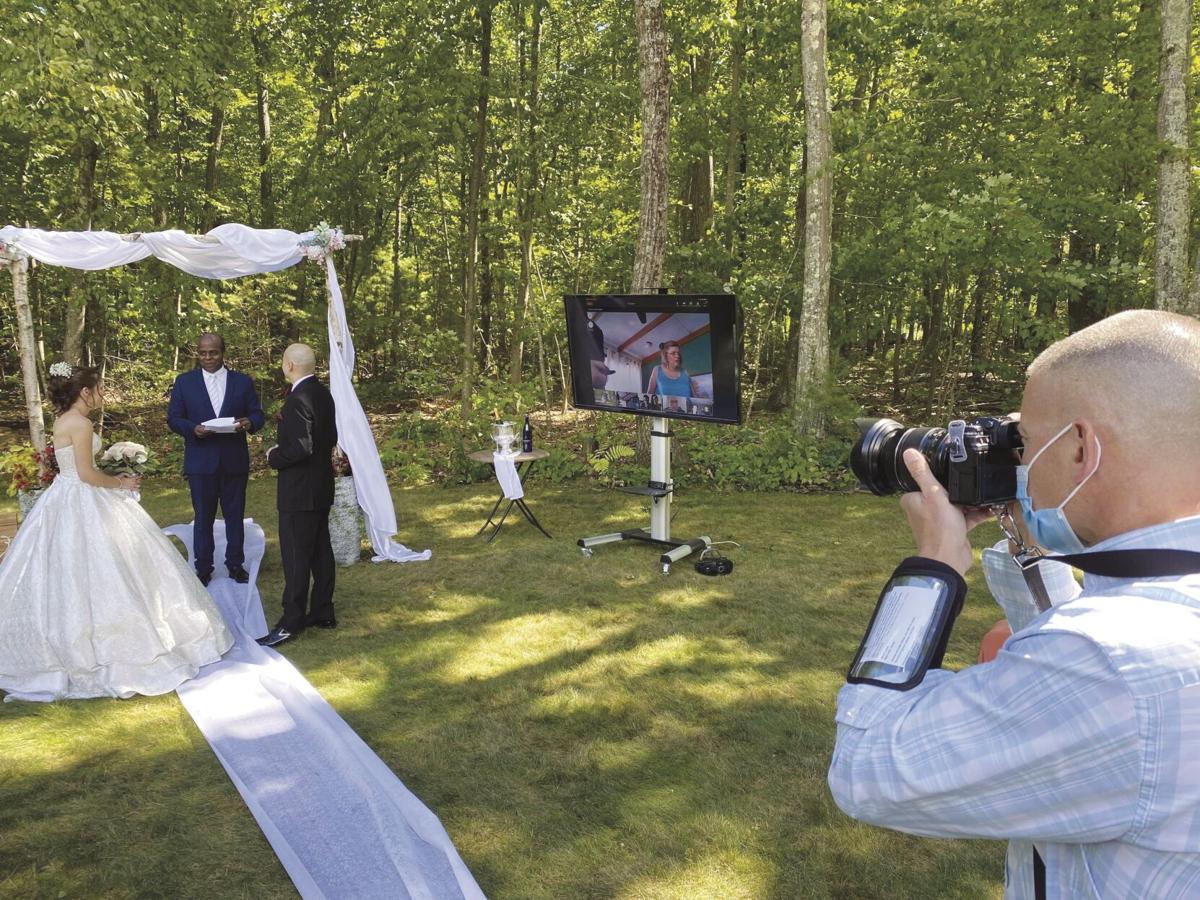 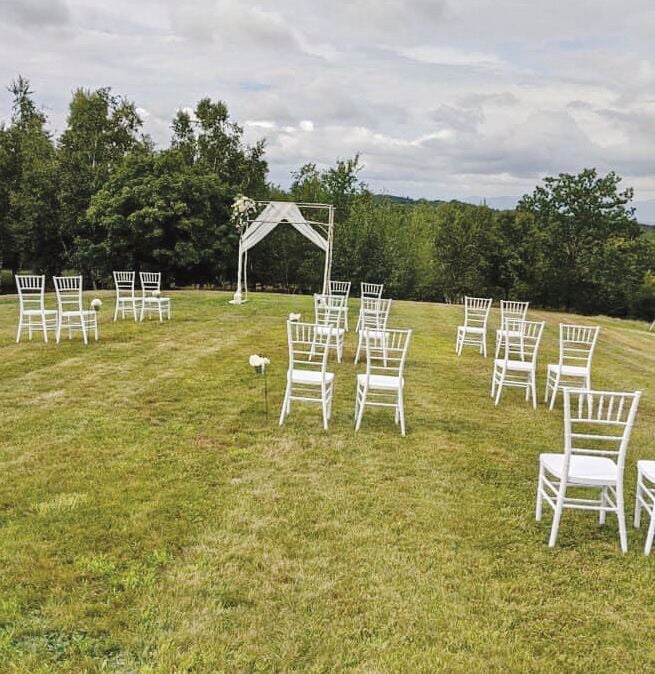 Chairs were spaced out for Bryan and Irma Keeler’s wedding at Birch Hill Farm in Gilford. (Courtesy photo/Irma Keeler) 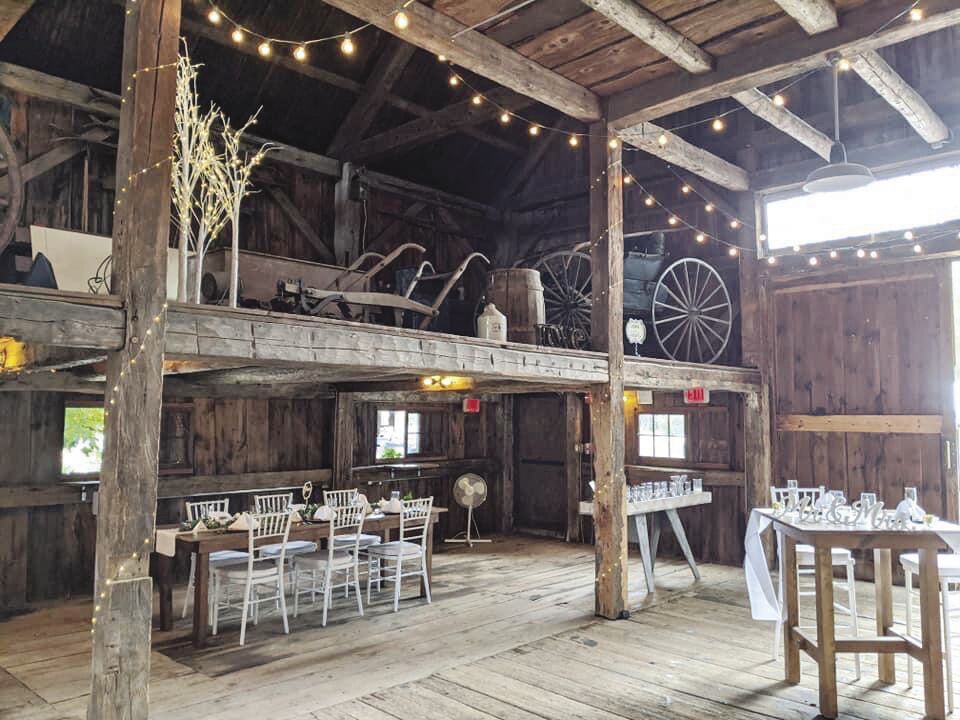 There was plenty of space in between tables for Bryan and Irma Keeler’s wedding reception in the barn at Birch Hill Farm in Gilford. (Courtesy photo/Irma Keeler)

Chairs were spaced out for Bryan and Irma Keeler’s wedding at Birch Hill Farm in Gilford. (Courtesy photo/Irma Keeler)

There was plenty of space in between tables for Bryan and Irma Keeler’s wedding reception in the barn at Birch Hill Farm in Gilford. (Courtesy photo/Irma Keeler)

Irma Krupic’s dream wedding was a mere couple weeks away when COVID-19 started to become big news in the first week of March.

Then a week later, now only two weeks away from her boarding a plane for her destination wedding with her fiance, Bryan Keeler, the situation got murky. Schools were closing, professional sports leagues shut down, and workers were forced to work from home. In a couple days, Jamaica, where the couple’s wedding was planned, closed its borders to visitors.

After 18 months of planning, Irma and Bryan’s wedding would not happen on the scheduled date of March 28.

“At the time the first wedding was canceled, with all of the stress of planning it, it was horrible,” said Irma Keeler (her married name), a Laconia native who now lives in Canterbury. “No one really gets married in March, so we felt like we were the only ones affected.”

Keeler said she really didn’t think about an alternative option for a couple months - partly due to not knowing if she was getting a refund from the Jamaican wedding plans and the uncertainty of whether venues would be able to host it. State and federal restrictions on gatherings and social distancing were being implemented everywhere.

It wasn’t until her sister saw a newspaper ad for a “Tiny Wedding” at Birch Hill Farm in nearby Gilford that she started to catch wedding fever again.

The package offered flowers, photography, up to 50 guests, an outside ceremony, reception, dancing in the 1700s barn, and virtual streaming for those who cannot attend.The Birch Hill staff does all the work and couples don’t have to plan anything.

“Honestly, we didn’t have any plans to reschedule our wedding with the refund up in the air,” said Irma Keeler, who ended up with 30 guests. Bryan’s 92-year-old grandfather was able to attend, something that wouldn’t have happened in Jamaica. “Since we wanted to keep it small and (Birch Hill) had everything included we weren’t stressed about who was and wasn’t there.”

The ceremony had two chairs together, spaced six feet from the next set. During the reception there were four farm tables where Irma and Bryan sat groups together like her family, his family, and workers.

When Birch Hill owner Mary Anne Baron was losing practically all of her summer reservations and her fall dates were seeing fewer guests due to restrictions and attendees’ concerns with larger gatherings, she knew she had to think of something to recoup lost money. With all the venue’s events on her property either outside or in a barn with no heat, her season is limited.

“The ‘Tiny Wedding’ idea was an idea for a bridal rescue,” Baron said. “I felt there was a market for smaller weddings. The barn becomes a big dance party and it doesn’t feel cavernous and it works for smaller groups.

“I am not making as much money, but I am getting a lot of (website) hits from people interested.”

Peter Clayman, co-owner of NH Images and Video in Nashua, has been in business for 17 years. With weddings making up 90 percent of his photography business, he is down 80 percent so far this year compared to last. So he and his business partner, Jamie Wood, who handles the videography, had to get creative.

He joined Baron to be the exclusive photographer for the Tiny Weddings, while also taking on many more elopements than he has ever done (or had time for). He has done photo shoots for high schoolers who didn’t have a prom and taken photos of a funeral for a veteran. He also hooked up with a real estate company out of Colorado, which used his photography services.

“I had no clue it would be this crazy,” Clayman said. “I think what was happening at the end of March we kind of had our ‘oh (expletive)’ moment that this year was going to be gravely affected. In April we had an epic flood of inquiries, reschedules, and checking our availability for next year. Overnight, we were looking at 2020 as a good year and all of a sudden we were empty.

“I went for a long stretch from March until June before I was back to even doing smaller weddings. That was unheard of (for me).”

Clayman has many open weekends for the rest of the wedding season that runs until the end of November in New Hampshire. He has had to stop using many of his contributors.

Susanne’s Weddings, a florist in Hampstead, surprisingly has a lot of work on the weekends, but each event has decidedly fewer guests.

“I’m booked doing a wedding every weekend, even though I didn’t start up again until the end of June,” said owner Susanne Cutuli, who noted that in a normal year 99 percent of her business is for weddings. “I lost 150 weddings this year, either postponed or moved to next year.

“(Many couples) are still getting married on the day they were going to, but they are definitely not the weddings they had planned.”

The Chesterfield Inn, in Chesterfield, a small town in the southwest corner of the state, has a similar plan to Birch Hill with its elopement package - a bouquet, small cake, Prosecco for a toast, and dinner for two. At $700, it is something couples that book at the spur of the moment after original plans blow up due to the coronavirus.

“(The elopement option) is a big seller these days,” said Judy Hueber, who with her husband, Phil, has owned the inn for 33 years. “We don’t make as much money but I don’t see us doing weddings for 50 people until COVID passes. It’s just too many people together.”

Chesterfield Inn, which could fit up to 60 people pre-coronavirus, has also seen a fair share of small weddings. The events are now hosting no more than 20 guests.

“We have done several weddings since we reopened, but they were very small, from two to 12 people,” Hueber added. “People are canceling big weddings and opting for small celebrations with close family and friends. They are putting off big parties until COVID goes away.”

Cutuli, Clayman and Baron are now hoping to enjoy a spoil of riches in 2021 that will feature rescheduled bookings, as well as many new events. They said the hectic schedule will force them to work many more hours, hire additional staff and do a lot of juggling.

“We’re going to have quite a ripple effect in 2021,” said Clayman.”It’s actually a good-news, bad-news situation.We’ve had to transfer so many events to next year that it is handcuffing our ability to bring in new business. But the good news is we are stacked up for next year.”

Is there a future in remote working?

When the coronavirus pandemic hit, industries around the region were left scrambling to figure out how to make the switch to working remotely.