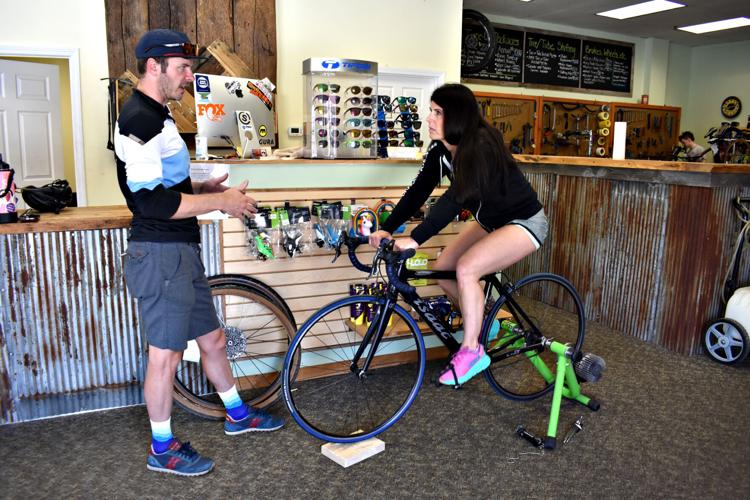 Myles Chase, of MC Cycle and Sports in Laconia, explains to Melissa Aupperle how to get comfortable with her bike on the road. (Adam Drapcho/The Laconia Daily Sun photo) 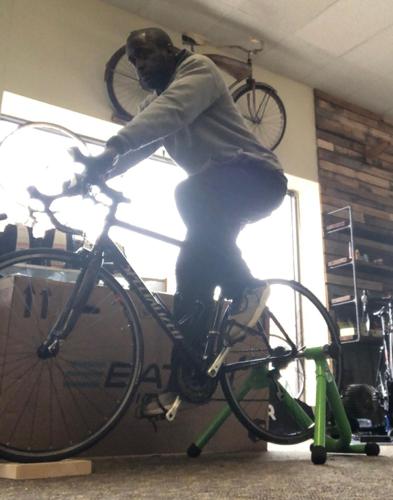 Antonio Coates takes a few spins on a bicycle provided by MC Cycle and Sport. Coates is one of the two members of The Laconia Daily Sun's Rookie Academy, which is training to take on the IRONMAN 70.3 Timberman triathlon on Sept. 18. (Courtesy photo)

Myles Chase, of MC Cycle and Sports in Laconia, explains to Melissa Aupperle how to get comfortable with her bike on the road. (Adam Drapcho/The Laconia Daily Sun photo)

Antonio Coates takes a few spins on a bicycle provided by MC Cycle and Sport. Coates is one of the two members of The Laconia Daily Sun's Rookie Academy, which is training to take on the IRONMAN 70.3 Timberman triathlon on Sept. 18. (Courtesy photo)

The question, "Want to sign up for a 70.3-mile triathlon?" might have sounded more appealing when the event was more than six months away, but now that there's just three months left, the faces of the first-time participants who agreed to the challenge no longer bear the excited optimism they had in February.

"Now it's really focus time," said Melissa Aupperle, who, along with Antonio Coates, agreed to be part of The Laconia Daily Sun's inaugural Rookie Academy. The idea behind the program, first developed by the Laconia Citizen during the first iteration of the Timberman triathlon, is to take two local people who have never participated in a triathlon, and see if they can reach the finish line of the IRONMAN 70.3 Timberman Triathlon if the material roadblocks are removed from their training.

The tone might have changed now that they are fewer than 100 days from the event, but Coates and Aupperle have already been training for months. Thanks to in-kind support from Bootlegger's, Fit Focus, The Wellness Complex, MC Cycle and Sport, The IRONMAN Foundation and Peak Triathlon Coaching, Aupperle and Coates have already begun to reshape their bodies, steel their minds, and build their support teams in order to complete the 1.2-mile swim, 56-mile bike ride and 13.1-mile run on Sept. 18.

"I feel confident about it," said Coates, describing some of the lessons he's learned so far.

He has already had challenges to his training, which is something he anticipated. What he didn't expect was from where those challenges would come. He has been thrown curveballs in his personal life, which has taught him that it's a virtue to show vulnerability in his social circles. And by showing that vulnerability, he has been returned stronger than before.

"There's a lot of strength in vulnerability," said Coates, explaining that support from his "church family" has helped him deal with stumbles without losing sight of his goal. "It's about sharing, and keeping your mind set on goal. For me, that's Christ... Keep your eyes set on Christ, that's the only one that will get you through it."

Aupperle has her own support team in the form of the Recycled Percussion boys — Justin Spencer, Ryan Vezina and Tony Zane have all become serious triathletes since Justin and Ryan completed the 2021 Timberman on a whim. Aupperle has leaned on their expertise, and their workouts, to help keep herself moving in the right direction.

"Consistency is key," Aupperle said, in order to maintain momentum. "It means that you don't feel like you're starting over all the time." She said she devotes time every day to training, for seven to ten hours each week. "It's not just run, bike and swim," she said, adding that she includes strength training, working sore muscles with a foam roller and massages, and dynamic warm-ups.

Running was something both Aupperle and Coates had some comfort with before they started training, and swimming was one of the first areas that Colin Cook, of Peak Triathlon Coaching, focused on this winter. They've been building their stamina on stationary bikes as well, but now it's time for them to log miles on genuine asphalt.

The world of high-performance bicycles can get confusing, and expensive, quickly. But beginner triathletes should steer away from purpose-built triathlon bikes and look for a bicycle made for general road racing, said Myles Smith of MC Cycle and Sport. Triathlon bikes have a different geometry that, while providing some advantage on race day, will be uncomfortable and unstable every other day of the year.

"They're really only good for triathlons," Chase said, and aren't worth the eye-watering cost unless they're sought for 140.6-mile events. "Road bikes are ideal," Chase explained.

So, then, which road racer should the beginner triathlete buy? Chase said it's more important to pay attention to the number on the frame than the brand name. Whether buying new or used, shoppers should know what size frame is right for their stature. The most common mistake he sees is riders getting the "right" bike in the wrong size.

"It really comes down to fit," Chase said.

Equipment manufacturers will then roll out a stream of other temptations, such as aerodynamic helmets, carbon fiber-soled shoes, and ultralight wheels, but Chase said the smartest money is spend on something he can't stock on his shelves.

"You can buy all the gear you want, and you can make marginal gains, but a proper training program from a certified coach is going to save you huge amounts of time," Chase said.

It's better to spend time in the saddle than browsing for accessories online. Chase suggests getting as familiar with the bike as possible, including with the shifting mechanisms, and in all of the main riding positions. For getting-to-know-you rides, he suggested The WOW Trail, Upper and Lower Bay roads in Sanbornton, and Shore Drive by Ellacoya State Park in Gilford. Then take the bike to the Timberman course itself.

"Get familiar with it on the race course," Chase said. "On large (mileage) days, ride segments of the course." That way riders won't be surprised by a curve or crest come Sept. 18.

With the Fourth of July each year comes a discussion around fireworks. Is it time for a new way to celebrate? Click the image below to answer