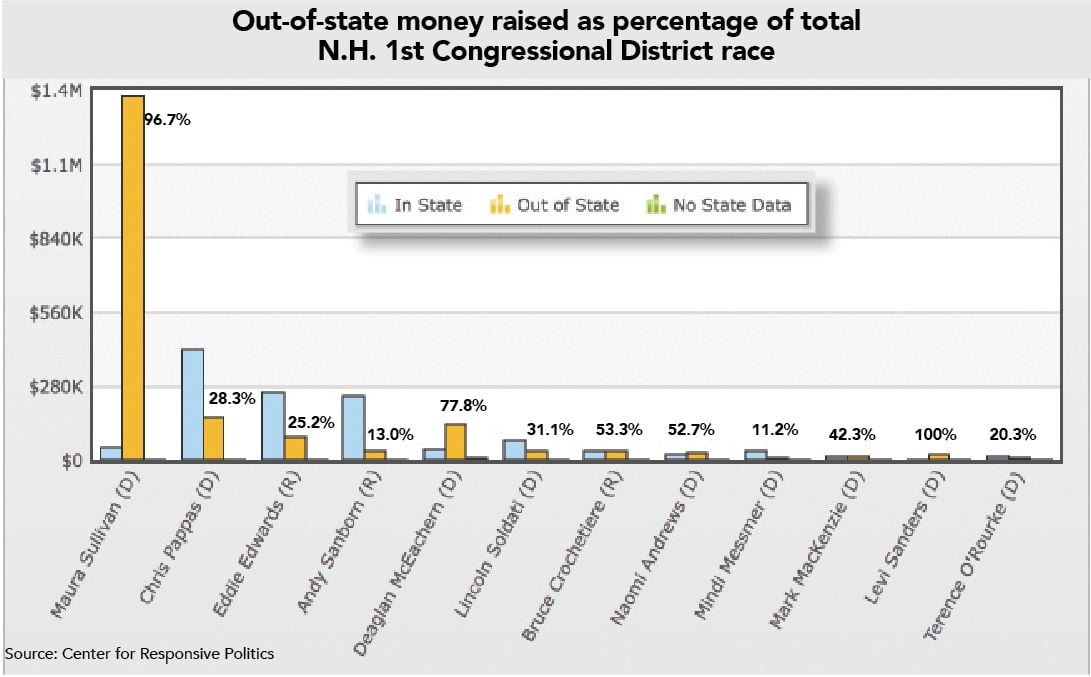 LACONIA — Maura Sullivan, who is seeking to succeed Democratic Rep. Carol Shea-Porter, has received a higher percentage of out-of-state individual contributions than any other major U.S. House candidate in the country this election cycle, according to the Center for Responsive Politics.

A total of $1.37 million, or 96.7 percent of her individual contributions, come from outside New Hampshire and $46,648, or 3.3 percent, are from in-state donors, the nonpartisan research group says on its OpenSecrets.org website.

Congressional candidates in small states often have high levels of out-of-state contributions, experts say. Control of the House is in play and New Hampshire’s 1st Congressional District is highly competitive, having switched back and forth among Republicans and Democrats for the last decade.

Also, Sullivan has extensive contacts outside the state, having served as a captain in the U.S. Marine Corps and as assistant secretary in the U.S. Department of Veterans Affairs in the Obama administration.

For her part, she makes no apology for fundraising success and says every dollar will be needed to keep the seat in Democratic hands and to regain control of the House in the fall.

Still, 96.7 is an eye-popping statistic.

Dante Scala, an associate professor of political science at the University of New Hampshire, said the size of the state factors in.

“New Hampshire is not a large state and there are not that many donors in it,” he said. “Once you get past a certain number, the more money you raise, the larger the percentage of out-of-state donors is going to be. If you’re going to be raising that kind of money, it’s safe to say the majority is going to come from out of state.

“Of course Sullivan has all sorts of connections. She could make a case to donors around the country who are Democratic, ‘This seat is essential to a Democratic majority and I’m uniquely positioned to win that seat.’

“I could imagine a donor in California or New York that would be interested.”

“It’s all about the Democratic majority,” Scala said. “An awful lot of women are winning Democratic nominations to run for Congress. Sullivan is well educated. She certainly fits. She has the look and the sound of a potential winner.”

Executive Councilor Chris Pappas, whose family has owned and operated the Puritan Backroom restaurant in Manchester since 1917, is No. 2 in fundraising to Sullivan in a field of 11 Democratic candidates.

Pappas has raised $665,975, 71.7 percent from in-state contributors. On the campaign trail, he touts that most of his money comes from within the state, while other candidates have attacked Sullivan for out-of-state contributions and her short residency in New Hampshire. She moved to Portsmouth in the summer of 2017, a few months before Shea-Porter announced she would not seek re-election.

Sullivan has also been criticized for the $54,000 in contributions she has received from people with ties to Bain Capital, the Boston-based private equity firm that was once led by former Republican presidential candidate Mitt Romney.

Pappas came into the campaign with good name recognition, while Sullivan has been able to boost her recognition through campaign advertising and media coverage.

A recent poll by Saint Anselm College showed Pappas with an advantage over Sullivan in favorability, 53 percent to 42 percent, and name identification, 79 percent to 70 percent. The margin of sampling error was 6.9 percent.

Given her fundraising success, Sullivan could build further support through campaign spending, and her numbers could come up further, Scala said.

“She already has shaped the race and will continue to do so,” he said.

Candidates who take a lot of out-of-state contributions could be subject to criticism that they don’t sympathize enough with constituents, but Scala said that, realistically, they still have to pay attention to voters and to concerns from their home district.

In any case, whoever wins the primary will likely see an inflow of national contributions, given the competitive nature of the race and the fight for control of the U.S. House, he said.

Whitney Larsen, Sullivan’s campaign manager, said that congressional races are expensive and in order to keep this House seat under Democratic control, a candidate has to demonstrate fundraising success.

“Maura is the leading fundraiser in New Hampshire's First District, for both Democrats and Republicans,” Larsen said. “And she is the only Democrat in the race who has demonstrated the ability to raise the resources necessary to keep this seat blue.

“The stakes are too high to not work hard to bring in every dollar she can to ensure that this seat doesn't go to a far-right Trump ally.”

She said that as of June 30, the last campaign finance reporting deadline, Sullivan received contributions from 2,786 people, and 577 of these contributions, about 20 percent, were from New Hampshire.

“Maura is proud of the support she has received from students at UNH, moms who are worried about affording the high cost of health care, former Obama Administration officials, people she went to graduate school with, and individuals she served in the military with,” Larsen. “People are stepping up and contributing to Maura's campaign because they know she is going to be an effective advocate for the people of New Hampshire."

At a recent candidates forum, Sullivan spoke of her determination to leave no stone unturned to keep the seat in Democratic hands.

"I am not going to look women in the eye the day after the election and say, 'I'm sorry I didn't work hard enough for you,'" she said.

“We are at a critical point in our democracy and the stakes are too high."

Larsen said that at least nine female candidates who are seeking to flip House seats from Republican to Democratic control have announced raising $1 million this past quarter, including six who have outraised Republican incumbents.

Sen. Maggie Hassan is another New Hampshire Democrat who has seen an inflow of out-of-state money.

In previous 1st Congressional District races dating back to 2000, no candidate approaches Sullivan’s percentage of out-of-state contributions. The closest was in 2016, when 59.2 percent of Shea-Porter’s contributions came from out of state.

On the Republican side of the 1st Congressional District Race, Andy Sanborn, has the biggest campaign warchest. He has $838,294, of which $511,116 is self financing.

All told, Democratic and Republican candidates in the race have raised $4.6 million and spent $1.6 million.

The Center for Responsive Politics relied on Federal Election Commission figures through June 30 for its contribution information.

The center provided a list of candidates ranked by percentage of out-of-state contributions. A number of candidates who have collected a relatively small amount of money, from $500 to about $20,000, had as much as 100 percent of their contributions from out of state. That group included Levi Sanders – the son of U.S. Sen. Bernie Sanders – who lives outside of the district and has raised all of his money from outside the state, according to the Center for Responsive Politics' list.

So what? Until Citizens United is gone, nobody should he expected to unilaterally disarm in a contest. Politics is very Machiavellian without reasonable constraints on outside money. My beef is that money as speech means if you can't afford to donate, you don't have the power of speech. This disenfranchises millions. A really dumb system