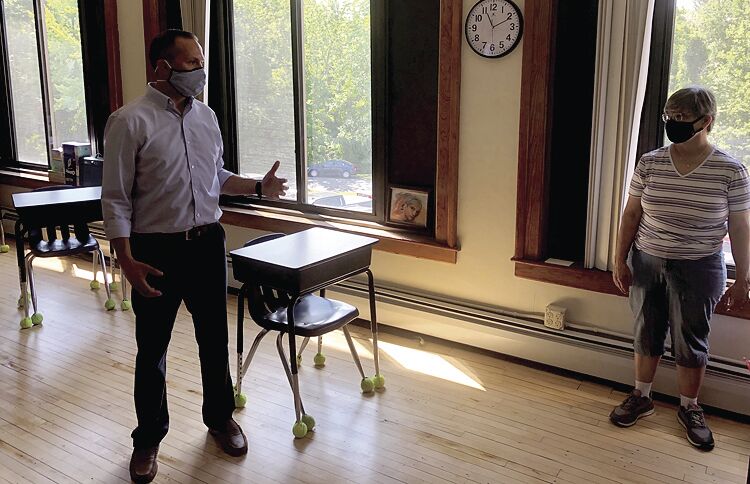 Vincent Schuck, head of Holy Trinity Catholic School in Laconia, discusses the possible layout of a classroom with teacher Maria Vertetis. Holy Trinity is scheduled to reopen on Sept. 1 with about 20 more students than it had last year — an enrollment increase of about 33 percent. (Michael Mortensen/The Laconia Daily Sun photo) 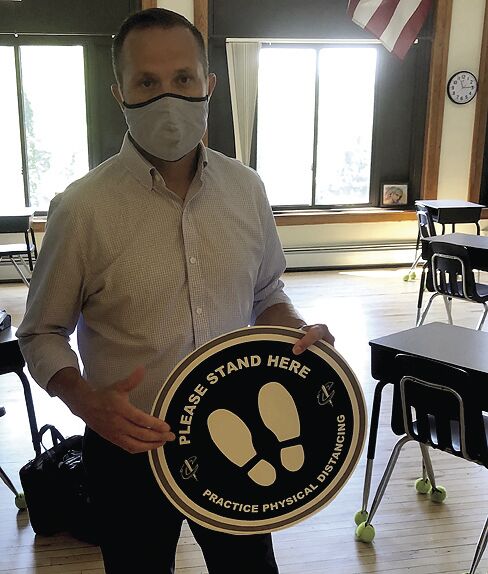 Vincent Schuck, head of Holy Trinity Catholic School in Laconia, holds one of a number of signs that are being put up around the school to enforce social distancing. (Michael Mortensen/Laconia Daily Sun)

Vincent Schuck, head of Holy Trinity Catholic School in Laconia, discusses the possible layout of a classroom with teacher Maria Vertetis. Holy Trinity is scheduled to reopen on Sept. 1 with about 20 more students than it had last year — an enrollment increase of about 33 percent. (Michael Mortensen/The Laconia Daily Sun photo)

Vincent Schuck, head of Holy Trinity Catholic School in Laconia, holds one of a number of signs that are being put up around the school to enforce social distancing. (Michael Mortensen/Laconia Daily Sun)

LACONIA — As public schools around the Lakes Region continue to work out the details about the safest way to reopen next month, some families have decided to start sending their children to private schools, or are seriously considering the move.

With smaller class sizes, private schools are finding they are able to resume school as usual — or fairly close to it — while conforming to the multitude of guidelines put out by state and federal agencies designed to minimize the spread of coronavirus.

Holy Trinity Catholic School and Acton Academy, both in Laconia, say they have seen a surge of interest among parents, and expect to start the year with significantly higher student bodies.

Trinity’s Head of School, Vincent Schuck, anticipates enrollment will be one-third higher than it was last year. He said there will be more than 75 students when the school reopens on Sept. 1, compared to the 56 students who attended the pre-K-through-8 school in the last school year.

Schuck is quick to point out that parents who are transferring their children to Holy Trinity are doing so mainly because of the school’s religious identity. But he acknowledges that the decision made earlier this summer to resume full-time, in-class instruction – while public schools were still grappling with possible remote learning or hybrid models – was also a factor in their decision.  “Parents were looking for certainty,” Schuck said. The return to the normal school routine “was the push they needed,” he added.

The increased interest comes at a time when the Diocese of Manchester announced a transfer incentive program a month ago. It offers elementary students from non-Catholic schools $1,500 off tuition during their first two years. Non-Catholic high school transfers will receive a $3,000 grant incentive.

Schuck sees the tuition break as giving parents another incentive, but not as the primary motivator.

Mary MacIntosh, the head of Acton Academy, is planning to welcome between 12 and 15 students to the school that opened last year with four students in a former residence on North Main Street.

Like Schuck, MacIntosh said parents were drawn to Acton largely because of the school’s distinct philosophy.

“Children learn core skills at their own pace,” MacIntosh said. “We engaged students in such a way that they can follow their passions.”

Because class sizes are small — in the case of Holy Trinity there will be no more than nine students in a class — it will be possible for students to be spaced more than 6 feet apart, and so eliminate the need for students or teachers to wear face masks.

At Holy Trinity, students will only need to wear masks when they are in the hallways or in the toilet facilities.

“They won’t need to wear masks for more than five minutes at a time,” Schuck said.

Acton students, likewise, will not have to wear masks in most situations. Plus, students will spend a lot of their school time in an outdoor classroom, MacIntosh said, including when the weather gets cooler.

MacIntosh said parents she talked with told her that while they were attracted by Acton’s educational approach, many hesitated to disrupt their child’s existing school routine, but the pandemic made them think twice.

Before COVID “they were thinking, ‘Let’s not make a big change,’’ MacIntosh said. “But hey,” she added, “we’ve been forced into a big change.”

Sant Bani School in Sanbornton, the area’s largest private day school, said their enrollment is projected to go up, but not significantly.

Charlie Britton, the acting head of school, said he expects this year’s enrollment will top off at around 145 students, an increase of five students. He said the school has received several inquiries from parents in recent weeks.

While schools emphasized everything they are doing to make the 2020-21 school year look as normal as possible, there will be differences.

For instance, Holy Trinity students will be eating lunch in their classrooms, not in the cafeteria.

Both Holy Trinity and Sant Bani have put athletics on hold until further notice, and music classes like chorus will not be taking place.

And Holy Trinity now features lots of signs around the building, showing students where to stand if they are waiting to use the restroom, the movement of traffic down the hallways, and the maximum number of people allowed in a particular room at one time.

“It will be different,” Schuck said of Holy Trinity’s routine. “But there’s order to it.”

LACONIA — At a time when health is at the forefront of most people’s minds, the new head of Holy Trinity School is announcing a partnership th…