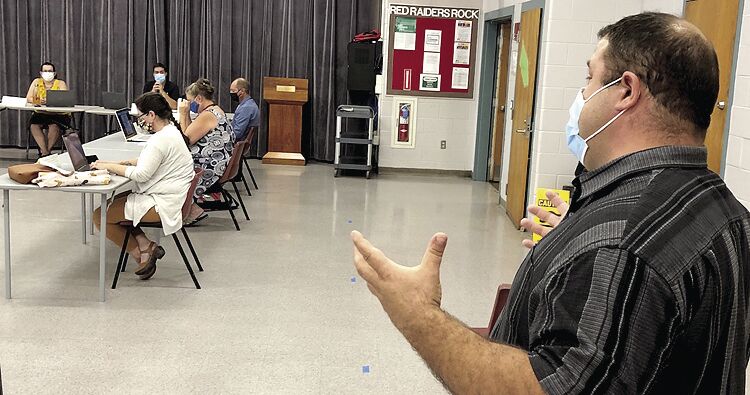 Travis Dickinson, a parent with two children in the Shaker Regional School District, tells the School Board Tuesday that remote learning instituted in March was unsatisfactory, and students need to be in school full-time. The board approved a hybrid learning plan that would have students coming to school twice days a week and engaging in remote learning the other three days. (Michael Mortensen/Laconia Daily Sun photo) 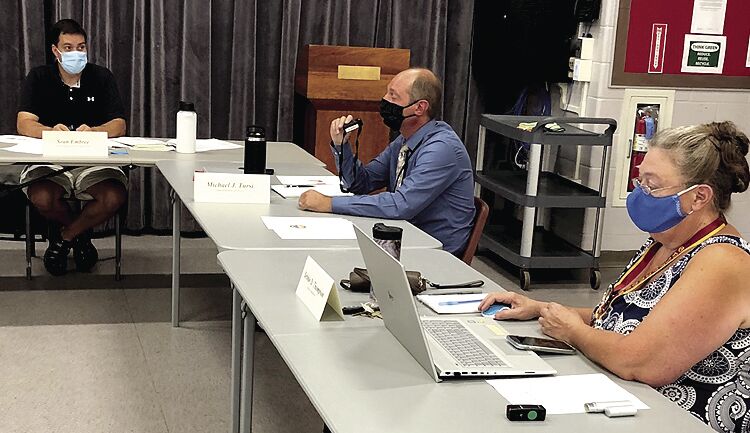 Shaker Regional School District Superintendent Michael Tursi, center, explains how the hybrid learning plan will work once the 2020-21 school year resumes on Sept. 9. Under the plan, students will come to school two days a week and do remote learning from home the other three days. Listening at left is School Board Chair Sean Embree. (Michael Mortensen/Laconia Daily Sun)

Travis Dickinson, a parent with two children in the Shaker Regional School District, tells the School Board Tuesday that remote learning instituted in March was unsatisfactory, and students need to be in school full-time. The board approved a hybrid learning plan that would have students coming to school twice days a week and engaging in remote learning the other three days. (Michael Mortensen/Laconia Daily Sun photo)

Shaker Regional School District Superintendent Michael Tursi, center, explains how the hybrid learning plan will work once the 2020-21 school year resumes on Sept. 9. Under the plan, students will come to school two days a week and do remote learning from home the other three days. Listening at left is School Board Chair Sean Embree. (Michael Mortensen/Laconia Daily Sun)

BELMONT — Students in the Shaker Regional School District will split their time between in-school instruction and remote learning when classes resume in six weeks, the School Board decided Tuesday.

The decision to use the so-called partial access-hybrid model came in a 6-0 vote at the end of a 1 hour, 45 minute meeting during which the board heard an overview of the school reopening plan by Superintendent Michael Tursi. The board also listened to comments and questions from parents and school staff.

Under the plan, students would come to school for a full day two days a week, with remote instruction the other three days. All students would be engaged in remote learning on Mondays. Half of the students will attend their respective schools on Tuesdays and Wednesdays, and the other half on Thursdays and Fridays.

Also, the plan requires students and staff to wear face masks whenever they are in the school, and students must also have a mask on when riding on a school bus.

Parents will be asked to screen their children for COVID symptoms every day before they leave for school. Tursi said it would be impractical to screen all students when they arrive at school. Also, the latest CDC guidelines state that schools should not screen students en masse, in part due to privacy concerns, according to Irene Mackes, school nurse at Belmont Middle School.

Calling the plan “a proposal and framework,” Tursi said administrators would take a hard look at the hybrid arrangement in early October and could potentially recommend changes to the plan prior to the Columbus Day weekend.

Tursi said the committee, which helped craft the recommendations, settled on the hybrid model for a variety of reasons: the coronavirus pandemic is continuing; it gives the district time to monitor the status of COVID-19 during the fall; it allows for increased social-distancing; and because students and staff need time to adjust to the different procedures and schedules at school.

Sept. 9 will be the first day of class, 1½ weeks later than originally scheduled. Tursi said the extra time would allow school staff to be better prepared for all the new procedures they and students will have to follow.

Some parents were clearly disappointed that students would not be returning to school full-time. They told the board their children had struggled with remote learning and had fallen behind in their studies. In addition, they said, because of the lack of in-person contact with teachers and friends their children were getting depressed and were having other emotional problems.

Travis Dickinson, who has children in Belmont Middle School and Belmont High School, told the board that remote learning has put an undue burden on parents who are ill-equipped to take such an active role in their children’s education.

“We provide clothing, food, and shelter for our children,” Dickinson said. “We are not educators. I lean on you for that. Remote learning was in no way adequate.”

But high school teacher Scott Lounsbury said under the circumstances schools are obligated to take extraordinary steps which have led to the hybrid model in an effort to minimize the possibility of the virus being spread in school.

“The only way we know (the precautions) are not working is if the kids get sick,” he said.

Dickinson suggested that the schools have morning and afternoon sessions as a way to get more classroom time.

But Tursi said that was not practical, partly because it would result in much higher transportation costs.

The Shaker District, which serves Belmont and Canterbury, currently uses 12 buses to transport students to and from school. Ten of those buses have a normal capacity of 77 students, but under social distancing guidelines those buses will be limited to 28 students, he said.

Tursi said half sessions would require the district to use more buses, which would be an additional cost. Moreover, he added, there was a question about whether the bus company would be able to hire enough drivers to handle additional runs.

Parents will be asked to consider providing transportation for their children. That could free up space on school buses, depending on the response, Tursi said.

“We are trying to maintain as much normalcy as possible,” he said.

The superintendent said with the board having approved the basic hybrid learning plan, school staff would now work to come up with a more detailed plan. He said school officials need to know how many parents will be unwilling to let their children attended in-school classes, and how many members of the school staff will be unwilling to return while the pandemic is continuing.

“The next step is determining what staff that can return and those that cannot.” Tursi said.

School Board Chair Sean Embree said although the 18-page school reopening plan goes into detail, there are questions that still need to be answered.

“I don’t know how our staffing will look like. I don’t know if we have enough staffing capacity for having half the number (of students) in the buildings,” he said. And, he acknowledged, like many parents he is worried how deviating from the normal school routine might harm the students’ education.