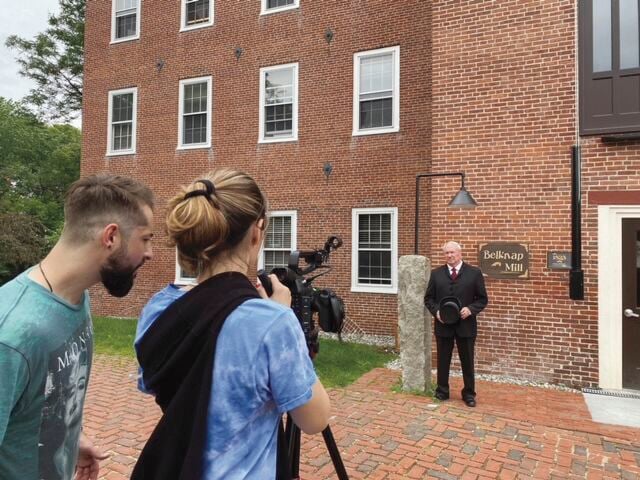 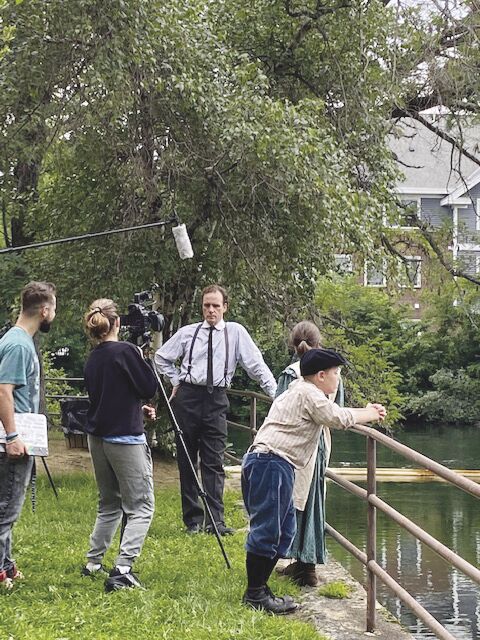 The cast of the Belknap Mill's new educational film prepares for a scene by the river. (Courtesy photo/Johanna Halperin) 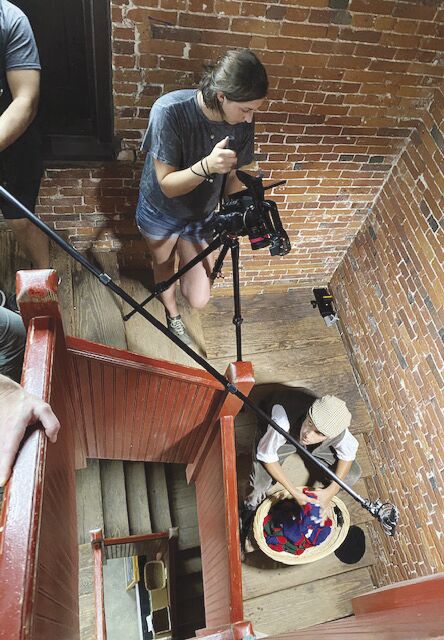 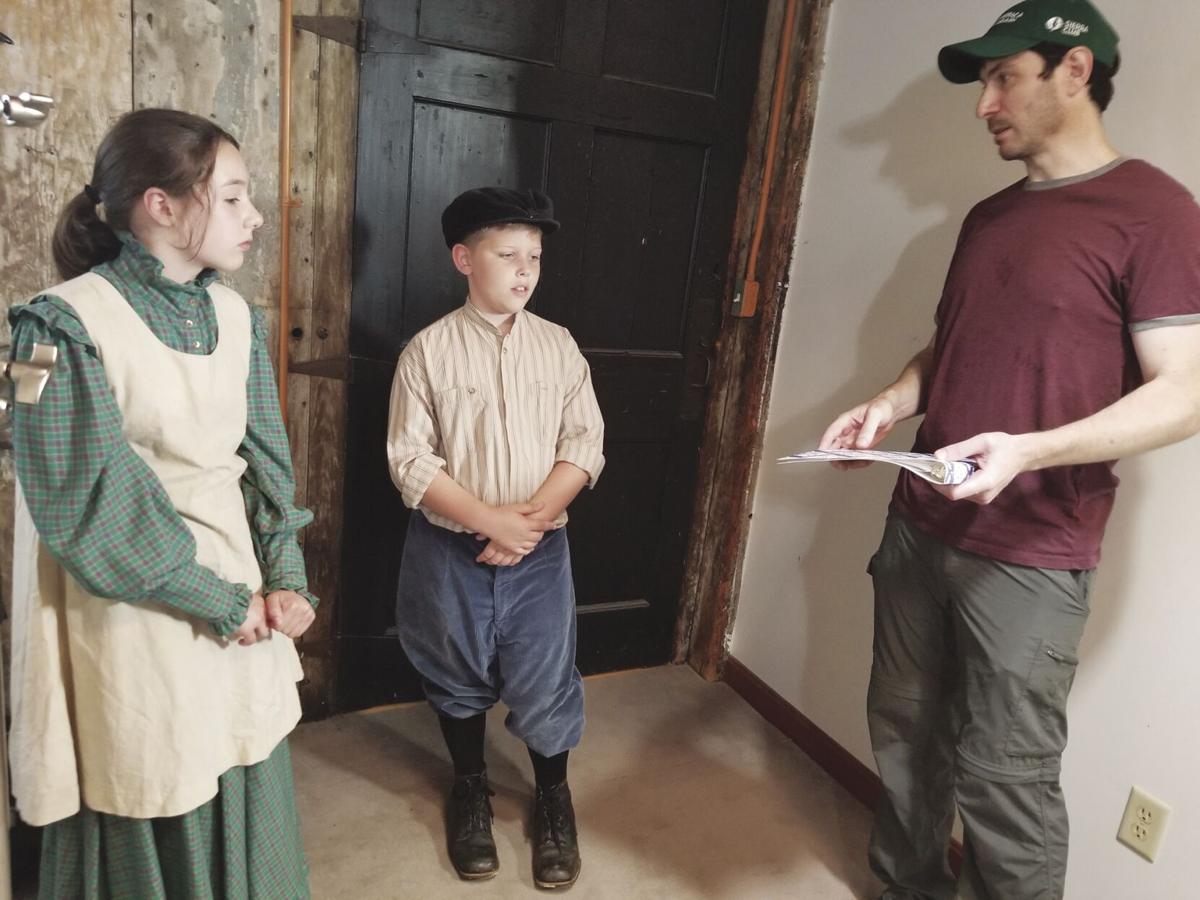 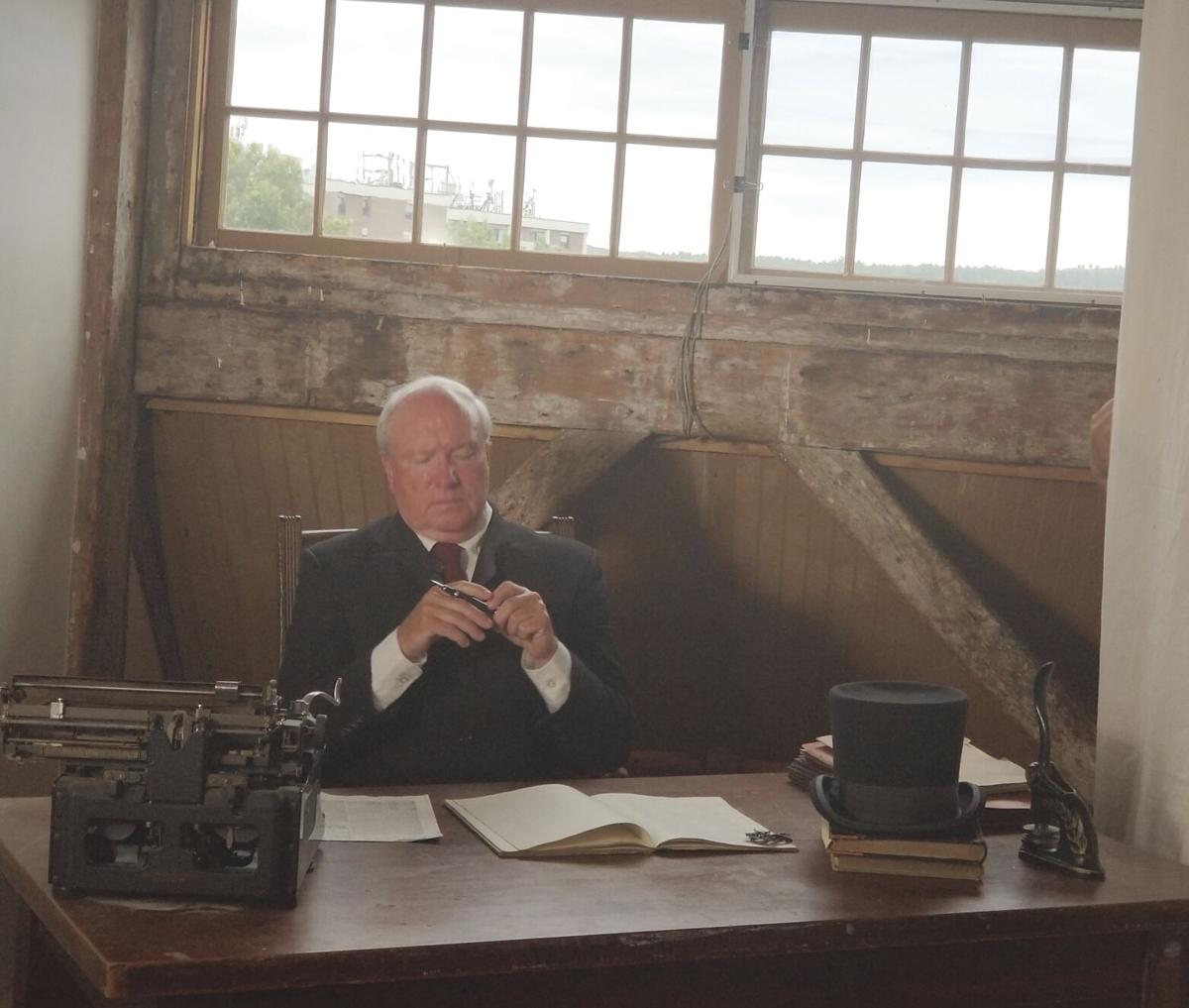 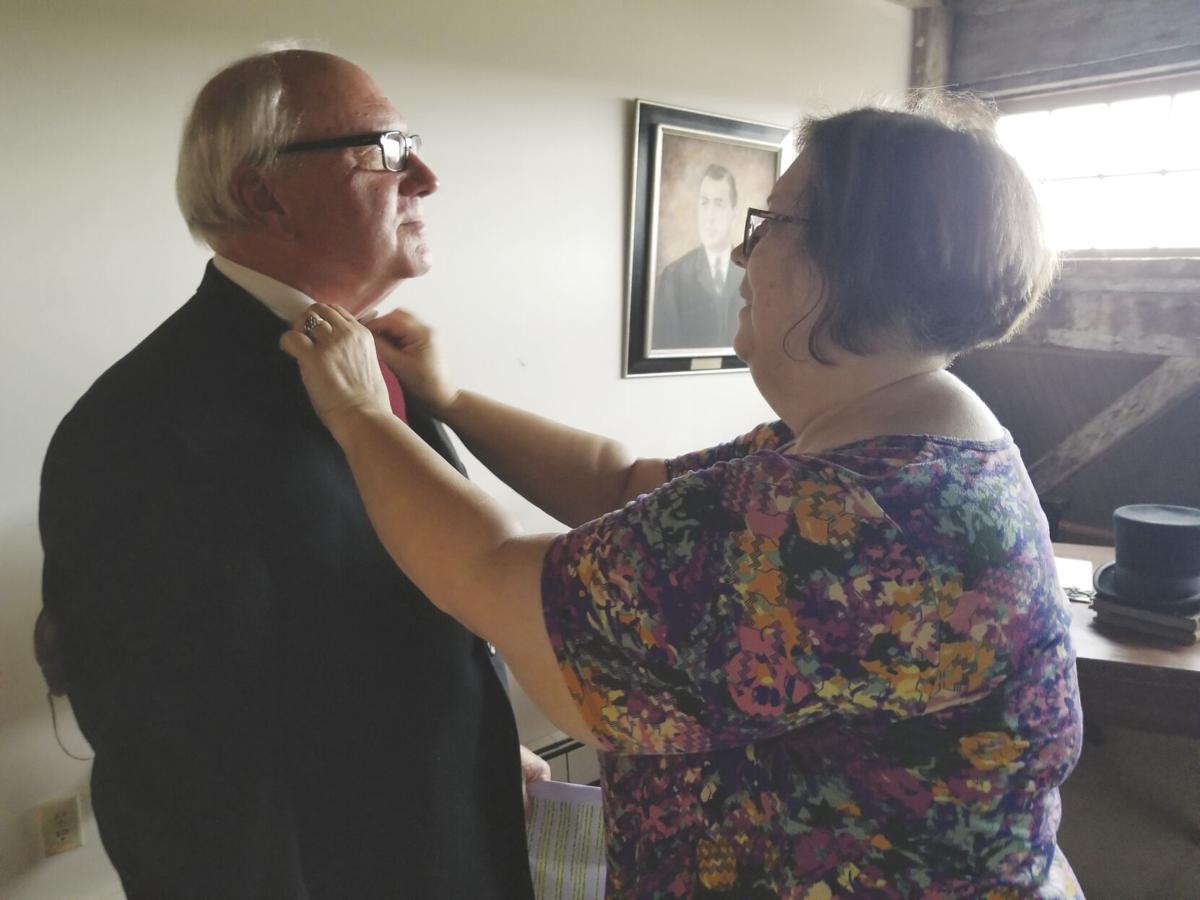 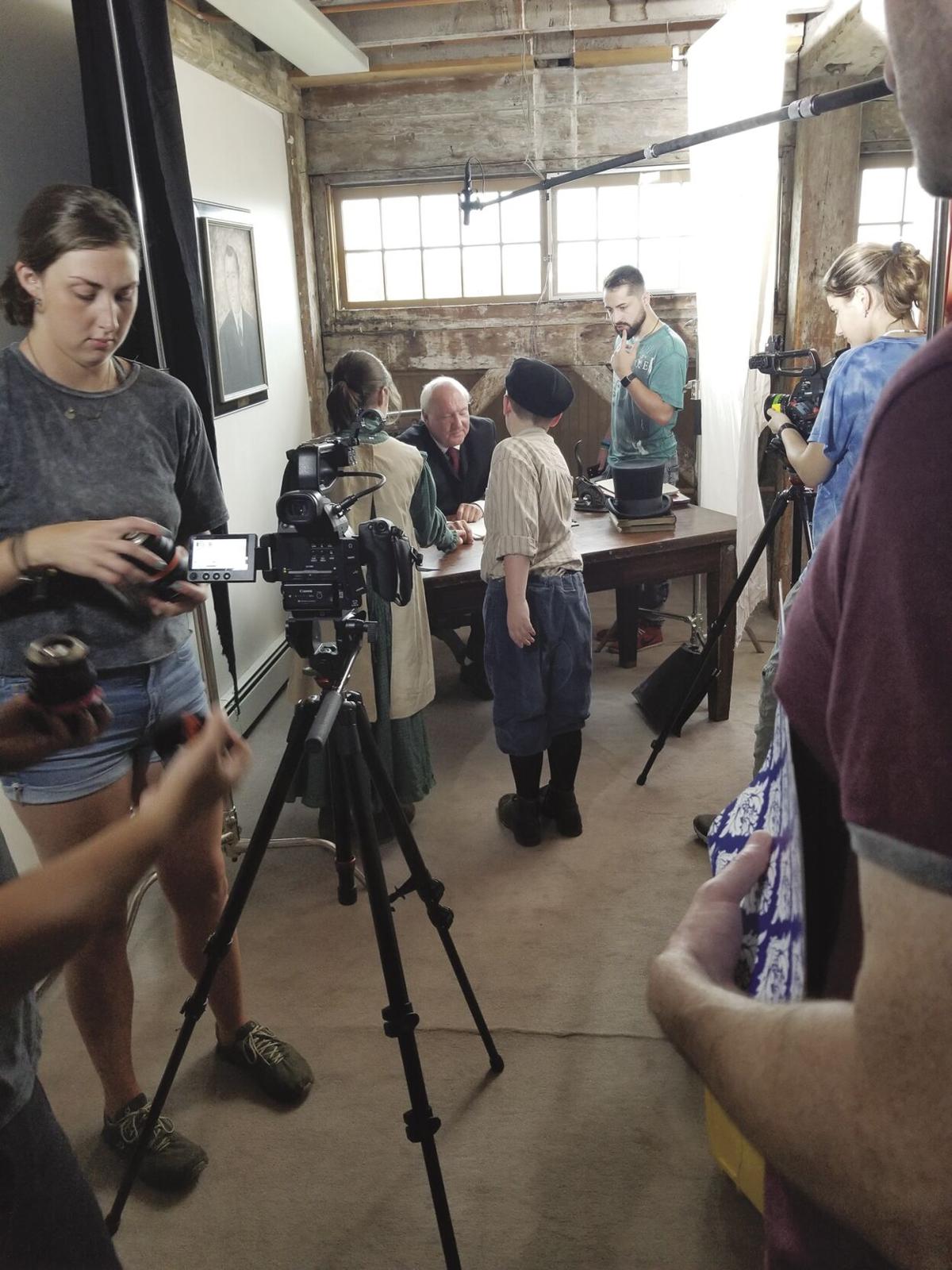 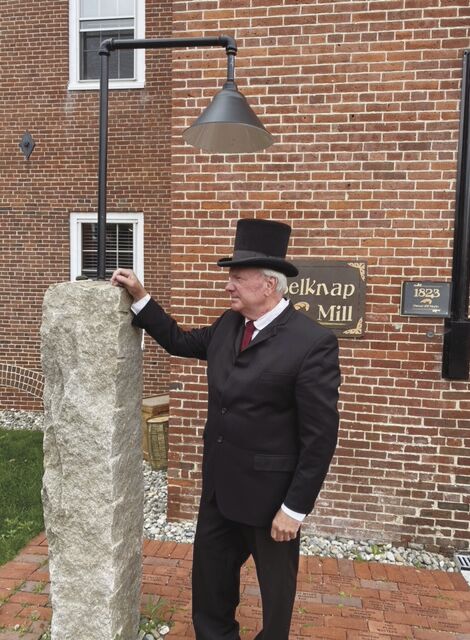 The cast of the Belknap Mill's new educational film prepares for a scene by the river. (Courtesy photo/Johanna Halperin)

LACONIA — In a stern voice sprinkled with fatherly kindness, J.P. Morin — historic owner of the Belknap Mill, portrayed by Ray Dudley of Gilmanton — gives a pep talk to two children who are about to start work.

“Come on in! Don’t dally. I’ll expect a lot of you because I expect a lot of all my employees! Do your job well, and you may end up a successful man like me. I started as a mill worker, and one day I was able to buy the whole mill,” Morin says.

It is 1918, the time of World War I, and American soldiers overseas are in desperate need of something that this mill manufactures — wool socks.

Morin, a French-Canadian immigrant, purchased the mill in 1913. For decades his advice has been passed down to schoolchildren and other visitors. Now the sock factory and Morin’s message will be immortalized in film.

On Saturday and Sunday, the Belknap Mill became the stage for a dramatization of the factory as it was in 1918, an adaptation of the original school field trip that is being made into an educational film, “A Day in the Life of a Mill Worker.” In December, it will be distributed to New Hampshire schools and available to classrooms across the country.

“It’s culture and heritage,” said Karen Prior, executive director of the Belknap Mill Society. “It’s sharing the history of New Hampshire. Many of the workers were immigrants. It shows the evolution of this community. If we don’t understand our history, how can we begin to understand our future?”

“To snap your fingers and make these kids turn from today back to 1918 was a great idea,” said Helga Stamps of Bristol, a docent who has conducted Belknap Mill field trips since 1999. “It’s too good to let it go.”

For 25 years, each spring until the COVID-19 pandemic hit, approximately 1,500 New Hampshire schoolchildren from Manchester to Littleton have toured the mill. They learn what it was like to work here a hundred years ago, when this was a militarily strategic factory and a leader during New England’s industrial boom.

Built in 1823, it also is the nation’s oldest unaltered textile mill, one of the first run by hydroelectric power, and is considered a living masterpiece.

For most people, these are little-known facts, tidbits of history that usually vanish from memory in a week or so. With the film, the mill and its past will become more widely known — and certainly more widely remembered.

Barbara Pitsch, a resident of Manchester and Moultonborough, designed the original interactive program in the mid 1990s, when day-long field trips were embraced by school districts, which is rarely the case now, she said. Experiential learning of American history has slipped from favor, field trips compete with instruction time and gasoline has become more expensive.

“History is a detective story,” said Pitsch, who served on the board of the New Hampshire Historical Society when she created the program that inspired the film. “It’s putting together clues. Mill towns like Laconia, Franklin and Manchester have such a storied history. It’s important for kids to understand the economics of these places. The same pressures are still there. We’re still talking about the kinds of businesses that should come to town. It’s really important for all citizens to have an understanding of that as they revitalize and rebuild their hometowns.”

The film, produced by TS Event Productions in Nashua, features 11 amateur actors from New Hampshire, including eight from the Lakes Region. For them it was a crash course in the history of Laconia, industry and technology — a rare eye on the city’s Franco-American heritage.

“I didn’t know Laconia was so innovative. A lot of original patents came from Laconia,” said Jennifer Shaffner, a city resident and veteran of school and community theater who plays Laura Brochu, the highest paid female worker in the factory’s employee records. Her job as looper entailed closing the toes on socks that would be shipped overseas — a key role at a critical time.

Portraying Brochu also gave Shaffner a closeup of what life might have been like for her great grandmother, who emigrated from Quebec to work in a mill in Nashua, and lived nearby with her fellow mill workers, like many immigrants who arrived from French-speaking Canada to settle and work in Laconia.

In the early 1900s the City on the Lakes hummed with a network of factories fabricating everything from complex machinery to tools for machine repair, needles and wool. Morin diverted the Winnipesaukee River to run beneath the sock factory, introducing hydroelectric power — an innovation that enabled second shift workers to toil by electric light instead of far more dangerous candlelight.

“We all hear horror stories about mills and how people were locked in,” said Shaffner. Morin “treated employees more like family. It was definitely one of the better mills to work in, than say, New York City at the time.” Their work week consisted of six, 10-hour days, and a good wage was 17 cents an hour.

The film, made possible by a $10,000 grant from New Hampshire Humanities, was conceived first as an adaptation to the COVID shutdown, when no one could visit the Belknap Mill in person, Prior said. Now it will facilitate remote learning in far-flung locations, spreading the Northeast’s industrial history.

“This is part of the cultural heritage of this region. It’s important for children to understand that their lives have similarities and differences to others in their community, then and now. This is a way for kids to get a handle on what kids would have been doing 100 years ago, day to day,” said Johanna Halperin of Powerhouse Theater Collaborative, who wrote the script. She and her husband, Bryan Halperin, who directs the film, co-founded the Winnipesaukee Playhouse and currently run the theater program for the Inter-Lakes School District.

In the movie, Shaffner’s favorite lines are what she says to Melodia Champagne, played by Kyra Felice of Rumney, a seventh grader at Mountain View Charter School in Plymouth. Melodia asks why females can’t become superviors or machine fixers. Brochu responds, “Maybe some day you can do any job you want and get paid what men get paid.”

“That’s still relevant today,” said Shaffner, “and I like that it’s part of the film.”

In the film, Kyra plays a finisher, which requires checking socks for imperfections and pairing them before they’re shipped. “It was the last job in the process of making socks,” said Kyra. It was also, at 13 cents an hour, the lowest paid job for women. “Back then women still couldn’t vote. It was really cool to see how far we’ve come since then.”

For most, the film was a crash course in professional acting, with one rehearsal by Zoom and one in person last week.

“I’m pretty nervous, but it feels pretty cool,” said Tanner Olson, 11, of Gilford, who plays Alphonse Dupont, a turner boy — a job which entails turning socks inside out for machine stitching, then turning them right side out when they’re done.

The hands-on lesson was an eye-opener to the realities of factory work. “eels could get stuck in the gears at the powerhouse. I learned about different jobs at the mill, and that girls were treated differently than boys. Boys could be turner boys, mill owners, pay masters, machinists and machine fixers. Girls could be knitters, loopers and finishers,” Tanner said.

For Pitsch and others who pioneered the original immersion experience, as well as the actors, the project seemed like a fitting climax.

“This film becomes part of the history of the mill,” said Dudley, an award-winning actor, now semi-retired, who performs in commercials and community theater. “I’m really excited for that alone. It was an honor for me to do this.”

Peter Josephson came from Henniker to play Fred Paquette, the machinist who runs the mill’s hydroelectric powerhouse — a series of turbines and gears fueled by river water.

At the time, eels swam upriver and frequently got stuck in the underwater workings — and the men and boys climbed down to extract them. In the movie, “I tell the kids to look down the pit to see if there are any live eels down there. There are, but they don’t want to go down and get them,” Josephson said.

He said he remains awestruck by what he learned. “It’s just mind boggling what this whole town system was like when these mills were open.”