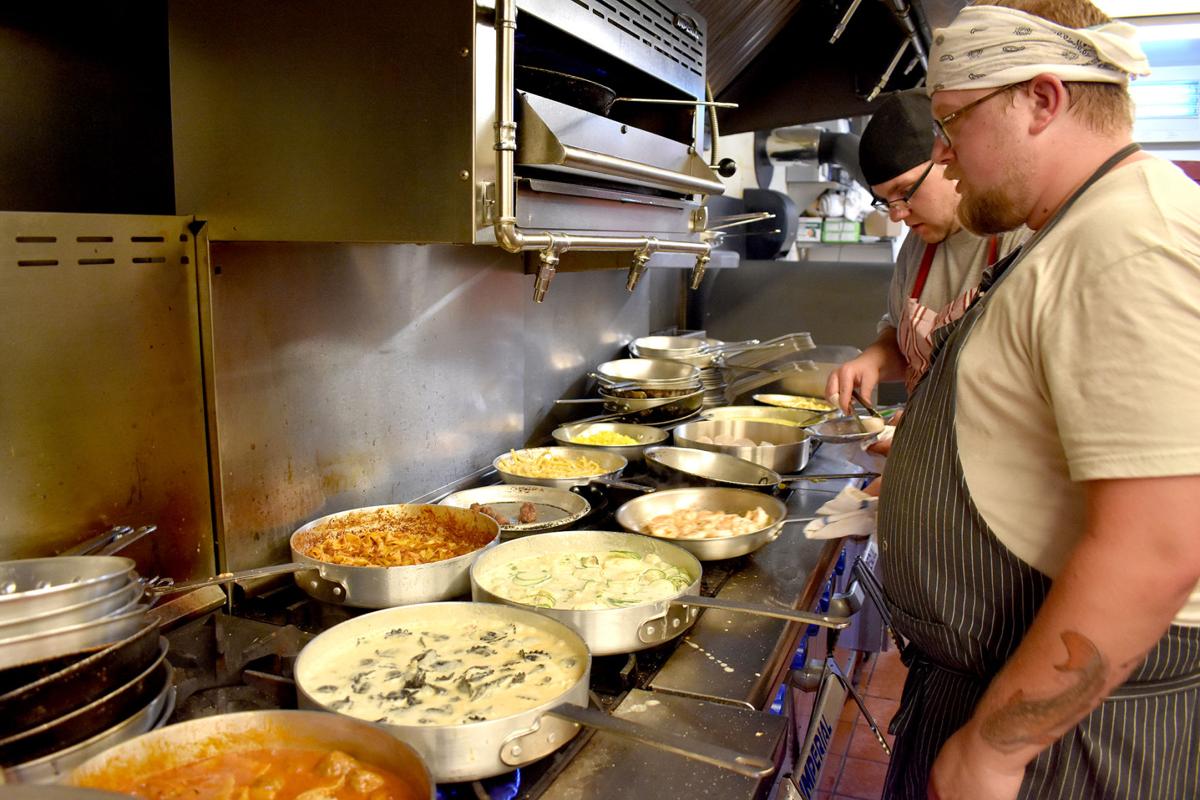 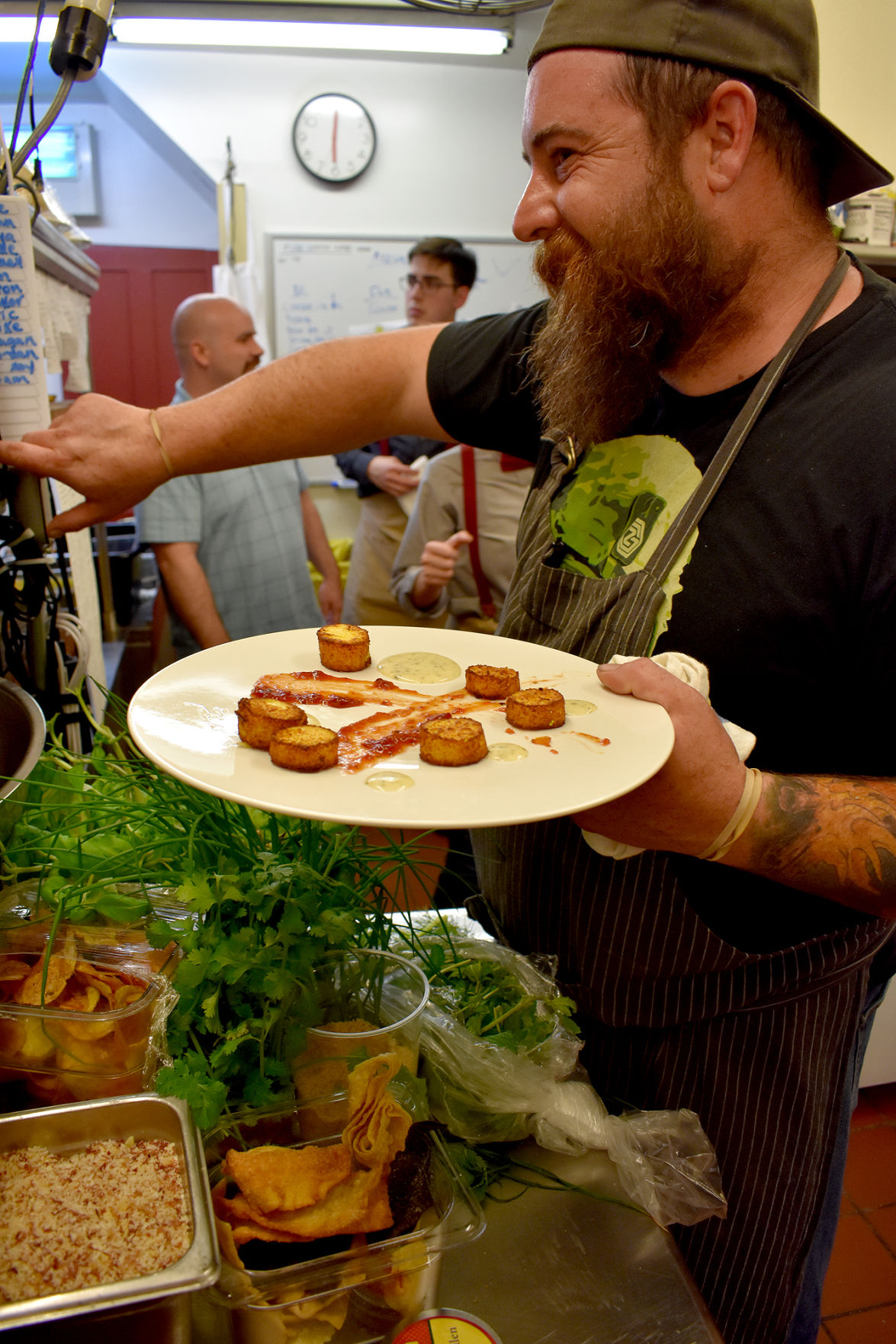 Chef Kevin Halligan prepares to put fresh basil leaves on a plate of polenta bites at the soft opening of Osteria Poggio on Thursday. The restaurant is located in the Center Harbor mansion built by John Coe in the 1820s. (Adam Drapcho/The Laconia Daily Sun) 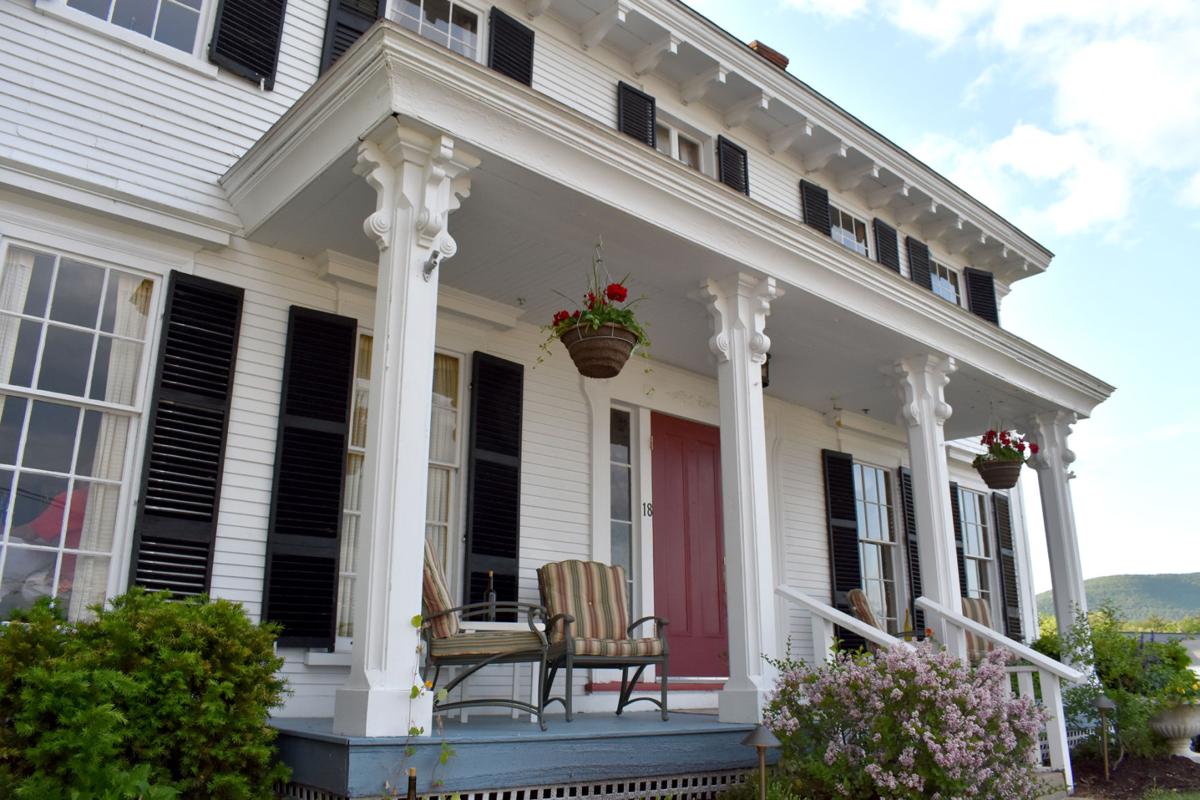 Built in the 1820s, the mansion in the center of Center Harbor has housed three successive restaurants. When inhabited by its orginial owners, John and Lavinia Coe, it was a part of the underground railroad. (Adam Drapcho/The Laconia Daily Sun)

Chef Kevin Halligan prepares to put fresh basil leaves on a plate of polenta bites at the soft opening of Osteria Poggio on Thursday. The restaurant is located in the Center Harbor mansion built by John Coe in the 1820s. (Adam Drapcho/The Laconia Daily Sun)

Built in the 1820s, the mansion in the center of Center Harbor has housed three successive restaurants. When inhabited by its orginial owners, John and Lavinia Coe, it was a part of the underground railroad. (Adam Drapcho/The Laconia Daily Sun)

CENTER HARBOR — There’s an element to Italian food that appeals to Kevin Halligan and Kaylon Sweet. Both chefs, tattooed and bold in personality, don’t depend on your acceptance.

That’s the approach that Sweet has taken as chef at Osteria Poggio – “Tavern on the Knoll” in Italian – which opened its doors on Friday. Osteria Poggio is occupying the historic structure at 18 Main Street, which most recently housed Lavinia’s Relaxed Dining and, for many years prior, The Coe House, named after John Coe, who built the mansion nearly two centuries ago.

Osteria Poggio is the latest local venture for restaurateur Kevin Halligan. He proved local conventional wisdom wrong five years ago by opening Laconia Local Eatery, which showed that a fine dining restaurant could survive on (almost) exclusively local produce and meats. A few years later, Halligan doubled down on his commitment to local goods by opening Local Provisions, a butcher and seafood shop on Main Street.

Osteria Poggio continues the farm-to-table theme, but on a new scale. With two floors of dining – three, counting the two-person cupola – the 130-plus capacity is by far the greatest application of the ingredient philosophy.

This isn’t Halligan’s first time cooking at 18 Main Street. From 2002-04, when he was barely an adult, Halligan interned in The Coe House kitchen in the evenings, and in the mornings was the “toast guy” at a popular breakfast place in Moultonborough.

Halligan will be available to help expedite orders in the Osteria Poggio kitchen, but it will be Sweet’s kitchen.

Sweet’s entry into cooking started in a fast-food restaurant in Hudson, where he got a job as a line cook on the closing shift.

“I decided I enjoyed it quite a bit, started cooking for fun with my manager, a Brazilian guy named Bruno.” Sweet had so much fun experimenting with food that he decided to enroll in the culinary program at Southern New Hampshire University. His talent was soon recognized, and he was selected to spend a semester at the Apicius International School of Hospitality in Florence, Italy, and to cook at the James Beard House.

He’s cooked at five-star restaurants and is practiced in molecular gastronomy. Sweet’s interest in food comes from a simpler place, though, as evidenced by a job he took as director of food service for a local summer camp. He cooks less for the brain, more for the soul.

“I really love to cook, I really love Italian,” he said. “In its complexity it’s simple, in its simplicity it’s complex.”

Americans tend to think of Italian food as one style, though each region of the peninsula has its own techniques and palates. What lies underneath all of them, though, is a desire to honor the ingredients.

Osteria Poggio held its soft opening on Thursday night. Sweet said that they hoped that 150 of their invited guests would show up for dinner, instead they served 315.

“I’m so proud of the crew, they did such a good job,” said Sweet. “It’s all about building a team, building a family here, and making people feel like part of the family when they come in.”

By 8 a.m., the kitchen crew was back at work to prepare for the first official night of service on Friday.

There was much to do. All of their pasta is made fresh, in-house, thanks to a machine imported from Italy. The same goes for their gelatos, and the rest of the desserts are made fresh in-house.

The menu will have to change several times each year, as available ingredients come into and out of season. Sweet and Halligan said that they plan on offering five hot and five cold appetizers, salads and wood oven-baked pizzas, a half-dozen pasta dishes and about as many entrees.

Sweet wants his customers to see something on the menu that stirs a memory, and for them to then be a little surprised when the dish is put in front of them.

“A lot of it is stuff people could recognize. We want to push, we want to make things more than what they are,” he said. On the current menu, the lamb bolognese dish is sprinkled with crystalized mint, and the halibut is served with preserved lemon, pickled chiles and saffron aioli.

“We’re trying to pick those nostalgic points and move it ahead of that.”

“I don’t think there’s any really good Italian food in the state,” said Sweet. “We’re just out here to be the best that we can be.”

Osteria Poggio is open for dinner Wednesday through Sunday, beginning at 4 p.m.

CENTER HARBOR — It hasn’t been quite two years since the doors opened at Osteria Poggio, an Italian restaurant in the historic Coe mansion. Ye…