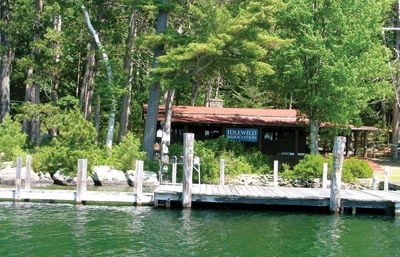 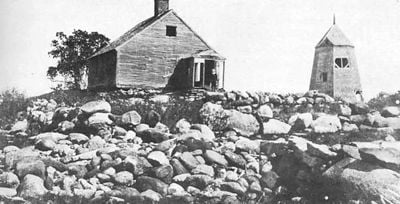 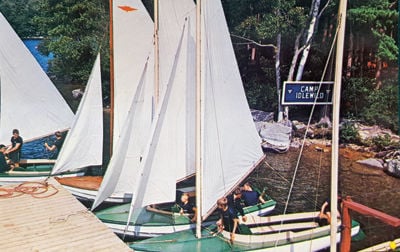 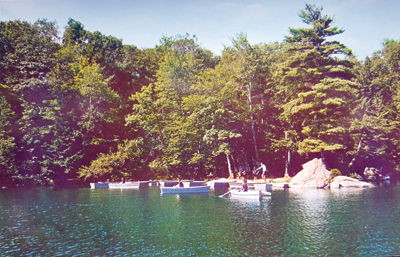 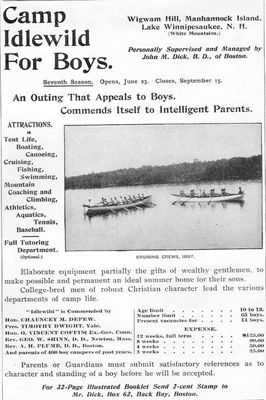 TUFTONBORO — Cow Island, which at 522 acres is the third largest island on Lake Winnipesaukee and is the second largest non-bridged island on the lake, has a colorful and far-reaching history, having served as home to the first herd of Guernsey cattle imported to America, as the site of a wind-powered grist mill and as the home to the Camp Idlewild, the longest continuous running private boys camp in the United States, which operated from 1891 until 1975. It was also the place where Archie comic strip creator Bob Montana spent many summers and worked on his art.

And, while descendants of the cattle raised on the island made it all the way to Antarctica with Admiral Byrd's 1933 expedition, it appears that there is no evidence to support a frequently made claim about Cow Island that the man who built the grist mill, Paul Pillsbury, went on to form the Pillsbury Flour Company in Minneapolis, Minnesota. So there's no link to the Pillsbury Dough Boy.

Nancy DePorter, a real estate agent for Keller-Williams in Wolfeboro, who has since 1967 has summered on Little Bear Island, located next to Cow Island, says that it is a common misconception that Paul Pillsbury went on to found the flour company. The Pillsbury company records show that the company was founded in 1872 by Charles Alfred Pillsbury and his uncle, John Pillsbury, both of whom were born in New Hampshire, Charles in Warner in 1842 and John in Sutton, in 1827. They could very well have been related to Paul Pillsbury, who was born in Boscawen in 1798, and, after running the Cow Island property, moved to Andover, Mass., in 1843, but that is not clear.

Located in Tuftonboro, just west of Tuftonboro Neck, the island has two distinct parts, a 300-acre northern half and a 200 plus southern half which are joined by a narrow isthmus. The nearest islands are Little Bear, Ragged and Sandy and Long Island, which is located in Moultonborough.

DePorter wrote on the Keller-Williams website that shortly after the War of 1812 the owners of Cow Island, who resided at the time in Dover, sent Paul Pillsbury to the island where he erected several buildings on the island, including a wind-powered grist mill on the highest peak of the island.

"The mill itself was 40 feet high and three stories tall. The timbers to build the mill were hewn on the mainland and brought across the ice. The mill was very popular for grinding flour and feed for cattle as it was the only mill in the near vicinity. The mill stood for 90 years and was destroyed in a bad storm about 1902. In 1935 the New Hampshire Guernsey Breeders Association built a replica of the mill and there are some pieces of the original mill within the replica.

"Guernsey cows were brought to the island in 1831 by Captain Prince. He had seen the cows at the Isle of Guernsey and brought over two heifers and one bull. These were the first recorded Guernseys in the United States and even though initially there were only the three, the herd eventually grew to 40 and this farm became known as a very productive dairy farm," she wrote.

The American Guernsey Association website says "In 1830 or 1831, a merchant captain named Prince brought a bull and two heifers around 1830 from Britain to Boston. Prince, who lived in Roxbury, sent a bull and a heifer to his farm on the 520-acre island now named Cow Island in Lake Winnipesaukee. Paul Pillsbury cared for the cows, which grew to a herd of 40."

Many of the Guernsey cattle which were traced to the line developed by Prince were sold to Pillsbury families living in the Hopkinton, Boscawen and Warner area with Moody Pillsbury acquiring a bull and a heifer in late 1842. according to Guernsey Association records. Many family members also made fishing trips to Cow Island.

Of all the Guernsey cattle that can claim Cow Island as their ancestral home, Iceberg is perhaps the most celebrated. Iceberg was a bull calf born to Klondike some 275 miles north of the Antarctic Circle during Admiral Byrd's 1933 expedition.

The grist mill produced flour, much of it from wheat grown by John Boody on nearby Long Island, and was so highly regarded that seeds were purchased by the federal government and shipped to farms in the Midwest. And, in an age where roads were uniformly bad and the lake was the favored place to move goods, the mill flourished. It was replaced with a replica by the Guernsey Association, which reported "In 1933, the New Hampshire Guernsey Breeders' Association organized a pilgrimage on a beautiful fall morning and some 90 Guernsey enthusiasts with their friends cruised down Lake Winnipesaukee, a distance of 18 miles, to the beautiful island, towards the eastern end of the lake with the beautiful Ossipee Mountains as background. Through the efforts of Commissioner of Agriculture Felker, Mr. Caldwell, and Mr. H.H. Blake of Concord, together with other interested friends, the ancient name of this Island, Cow Island, was changed the previous winter by the New Hampshire Legislature to Guernsey Island in America. The group evidences of the old Pillsbury farm buildings, sill of the old windmill, cornerstones of the house and barn, as well as the stone walls around the paddocks.

"It was then determined that some effort should be made to permanently mark this the home of the first Guernseys registered in the Herd Book and these same men were chosen as a committee. It was soon found from the sentiment of the surrounding country that the old windmill which had served such an admirable purpose to the entire neighborhood in the early days, and which had stood for a landmark for nearly 100 years would be the most appreciated marker. Consequently, an appeal was made to the Guernsey breeders of America and a sum of money sufficient to reproduce the mill was cheerfully given.

"In September, 1935 another Pilgrimage was made to the Island and the mill was formally dedicated and turned over to the custody of L.D. Roys, owner of the island, who conducts Camp Idlewild there. The occasion was honored by Governor H. Styles Bridges, and many notable and interested persons."

Roys had purchased Camp Idlewild in 1921 and the camp had already been in business for about 30 years, having been founded by John M. Dick of Boston around 1891. An early brochure advertising the island as a summer camp said that it had been in business for seven years and that among those recommending the camp was a former governor o the state of Connecticut.

Camp Idlewild for Boys was located on Wigwan Hill on Manhannock Island in Lake Winnipesaukee according to the brochure, which featured an 1897 photo of campers in larger racing boats and the words '"An Outing That Appeals to Boys, Commands Itself to Intelligent Parents." The camp was for boys aged 10 to 18 and had a capacity of 65 campers, who lived in tents and were offered boating, camping, cruising, fishing and mountain climbing, as well as baseball, tennis and swimming.

Over the years of the ownership of the Roys family, Camp Idlewild expanded to become the largest camp on Winnipesaukee, hosting as many as 400 campers who lived in cabins and took part in activities such as sailing, canoeing, riflery and archery, water skiing, and horseback riding with a stable of 18 horses, as well as a large variety of arts and crafts activities along with baseball and tennis and mountaineering and canoeing trips. The camp had 200 acres and horse trails all over the interior of the island. It was a daily stop for the Uncle Sam mailboat, and later the Sophie C, delivering mail to the campers as well as milk, ice cream mix, flour, and all kinds of provisions for feeding the campers and staff. All of the cooking and baking was done on the island and meals were served in a large dining hall, which also served as an assembly area for the camp.

Nancy DePorter says that she can remember the sight of horses being transported to the island on a large barge which brought them in from Harilla Landing on Long Island. She says that it was common for parents of the ldlewild campers to rent cabins on Little Bear Island when they came to visit their children.

Ed Roys took over ownership of the camp from his father, and in the 1970s the camp closed and large lots of at least five acres on which summer homes would be built were sold. A large part of the property, including the dock area, the former windmill site and playing fields as well as the dining hall area and Sunset Beach were preserved as a common area for all of the landowners, who are members of the Idlewild Association, which is housed in the former camp store near the dock area, which is closed to the public.

The island currently has a restaurant, Mama Lucy's, which might just be one of the lake's best kept secrets. Nestled near Gus' Lodge, named for former Camp Idlewild Music Director Gus Mazocca, the restaurant only serves large family-sized gatherings of 20 or more people and reservations must be made at least a year in advance for the five-course meals.

Among those who have enjoyed the large gatherings at Gus' Lodge is Peter Spanos of Laconia, a state representative with a long history in the hospitality industry who was a camper at Idlewild in 1968 and 1969. "They're a lot of fun and the food is great" says Spanos.

There is also another bit of history on the island which is currently for sale, a small 340-square-foot cedar cottage with a massive fireplace on Windswept Island, which is right next to Cow Island and looks south with a view of the "broads'' and the Belknap Mountain Range. The cottage was a summer retreat for Bob Montana, creator of the Archie comic strip and comics, who is said to have created many of his comics right on the little island.

The property is listed on the Roche Realty website as being under agreement.

There is a small public beach on the north side of Cow Island with a trail leading to a large, forested area which is owned by the town of Tuftonboro. Members of the town's Conservation Commission and other town officials recently visited the area with an eye to improving the appearance of the approximately 100 foot beach and reportedly have had offers from Camp Belknap to provide help in cleaning up the beach area and improving access for townspeople.