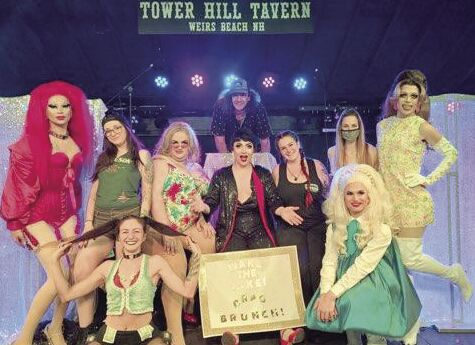 Tower Hill Tavern owner Anthony Santagate, top, gets his picture taken with the stars of last Sunday’s Drag Queen Brunch that brought the curtain down on the Wake the Lake weekend in The Weirs. (Courtesy photo) 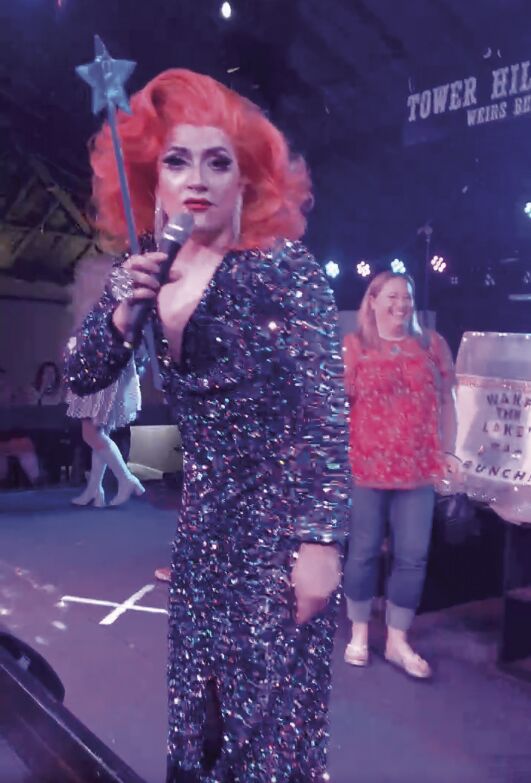 A performer holding a magic wand regales the audience in this screenshot from a video of Sunday’s Drag Queen Brunch held at the Tower Hill Tavern in The Weirs.

Tower Hill Tavern owner Anthony Santagate, top, gets his picture taken with the stars of last Sunday’s Drag Queen Brunch that brought the curtain down on the Wake the Lake weekend in The Weirs. (Courtesy photo)

A performer holding a magic wand regales the audience in this screenshot from a video of Sunday’s Drag Queen Brunch held at the Tower Hill Tavern in The Weirs.

LACONIA — What’s become an annual thing – the Wake the Lake block party hosted by several Weirs Beach bars – featured live music on outdoor stages on both Friday and Saturday night last weekend. But it might just have been the performance on Sunday morning – a drag queen brunch – that made the most noise.

“I never heard the upstairs as loud,” said Anthony Santagate, owner of Tower Hill Tavern and The Big House nightclub, and organizer of Wake The Lake. The second floor of his tavern was at its 250-person capacity, he said, “all full of women screaming at the top of their lungs.”

Santagate created Wake The Lake as a way to lengthen the busy season at Weirs Beach, which typically stays sleepy until Laconia Motorcycle Week in June. He has similar events, such as a blues festival, Biketemberfest and a Halloween party, which seek to stretch the season past Labor Day.

Last year’s Wake The Lake was postponed due to COVID, but if this year’s festival is any indication, the summer of 2021 is going to be a hot one at Weirs Beach. The weekend, Santagate said, was, “Great, everything went fabulous, everybody had a good time.” And the good times were given a rousing sendoff on Sunday morning with the drag queen brunch, a new addition that Santagate said is sure to become a regular part of his offerings.

Although he had never heard of a drag queen performance being held in the Lakes Region, Santagate said that he knew them to be successful in Key West. He was looking for something to put an exclamation mark on the end of the weekend, and when one of his employees mentioned the possibility, Santagate found exactly the punctuation he was seeking.

“It was good timing, it got dropped right in my plate. My bartender said, ‘My friend’s a drag queen.’” Santagate said. “I knew it was going to be OK, because I know the shows do well. It seemed like the right thing to do at the right time. It really topped off the Wake The Lake, I had a line going down the street at 10 in the morning.”

The shows feature males who dress as glamorous female performers, then take the stage to delight the audience.

“There’s a lot of theatrics involved, some group involvement, it’s a lot of fun and some of them can sing really well,” Santagate said.

It might seem like an odd pitch for Weirs Beach, with its close association with motorcycle culture. Indeed, one social media user criticized Tower Hill Tavern for promoting a “sickness,” but that lone post was quickly swamped by other users who promoted a live-and-let-drag philosophy, and yet others who chimed in about how much they enjoyed the show.

Richard Morten, from Laconia, said he was “very surprised” to hear about the show at Tower Hill Tavern. He associates the venue with hard rock concerts and motorcycle culture, and those types of places don’t usually reach out to drag performers. Yet, he said, he didn’t hesitate to don his wig, apply his makeup and slip on a dress to arrive as “Miss Vivian.”

Morten went to school for theater and has been performing for most of his life. About 12 years ago he got into burlesque theater and got the bug to perform, “When You’re Good to Mama” from the musical Chicago. That song is written for a bawdy female character, so, Morten said, “I threw on a dress and some makeup,” and “Miss Vivian” was born.

Morten has developed his drag character over the years, including hosting several burlesque performances. Performing in drag employs all of the usual theater tools, he said, yet is more liberating.

“I can say and do anything that I would never do as myself,” when in drag, Morten said. “Raunchy jokes, things like that.”

Morten saw some of the critical comments on social media, but wasn’t deterred.

“There were quite a few comments in different threads of people who weren’t welcoming to the show, but they don’t have to go,” Morten said. And, apparently, they didn’t. “I thought it would be a lot of fun, I didn’t expect there to be quite so many people. Everyone was very excited and had a really, really good time. People were very friendly and nice.”

In a good drag show, Morten said, the performers take the audience along for the ride.

“It’s very high energy, outrageous jokes and performances. There’s such incredible talent in the ladies in the show, the audience feeds off of that energy,” Morten said.

The only problem with the show was having to turn people away, Santagate said. He is already scheduling the next drag queen performance, which he hopes to book for the Fourth of July Weekend.

“I’ll have to do it at The Big House next time. It has a bigger floor,” Santagate said.

“If anyone gets to go see a drag show, they should,” Morten said. “They’re a lot of fun.”

The sickening has come to New Hampshire.