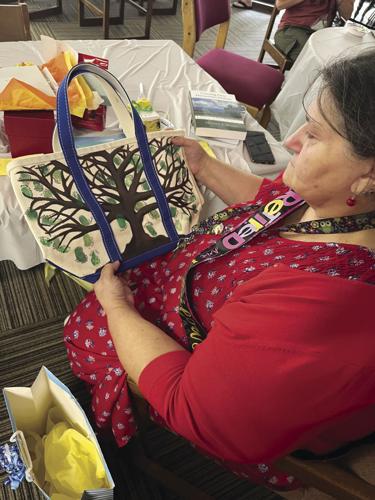 Lewis' coworkers celebrated her with a retirement party and gifts, including a tote bag with each teacher's signature. (Catherine McLaughlin/The Laconia Daily Sun photo) 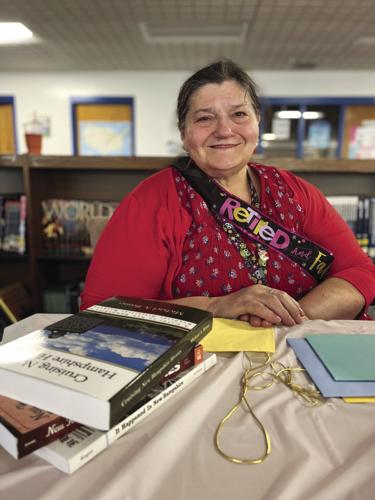 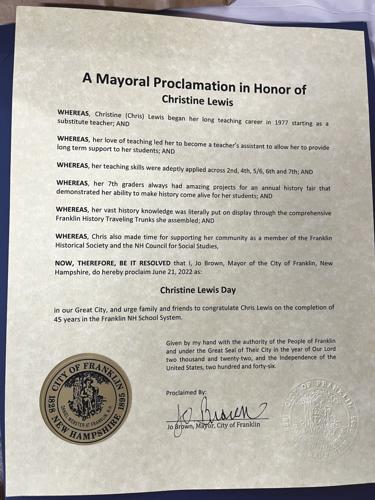 Lewis' coworkers celebrated her with a retirement party and gifts, including a tote bag with each teacher's signature. (Catherine McLaughlin/The Laconia Daily Sun photo)

FRANKLIN — Christine Lewis taught nearly 3,000 students during her 45 years in Franklin schools — she did the math.

Lewis, a social studies teacher who taught seventh grade for more than 10 years of her tenure, retired at the end of this school year. Franklin Mayor Jo Brown honored Lewis at a ceremony in her honor by declaring June 21, 2022, Christine Lewis Day in the city.

Brown’s proclamation celebrated Lewis’ reach within the district — having worked in grades two, four, five, six and seven — the high quality of student history projects produced by her pupils, the incorporation of her vast historical knowledge into her classroom, and her support of local history through her membership in the Franklin Historical Society and New Hampshire Council for Social Studies.

“Chris has always been an incredibly hard working and giving person,” said Principal Ken Darsney, pointing to several small, banana-themed gifts — bananas are a personal gimmick of Darsney’s — around his office that Lewis had given him during his years at FMS. “She understands the personal part of working relationships like no one else I’ve ever seen.”

“For an hour a day, four times a week she would come into my class during her off times and help kids with their reading,” Charnley said. “And it noticeably helped boost up our reading scores,” which had been down since the start of remote learning.

“Though she worked 45 years here, she’s done hundreds of years worth of contributions to this community,” Darsney said.

Lewis grew up in New Jersey and got a degree in education from William Paterson University. After a brief stint in business – which she “absolutely hated” – a friend convinced her to move to New Hampshire. Knowing her interests lay in teaching, she started part-time work as a teacher’s aid. Then, after working there as a long-term substitute, Lewis took a full-time position teaching a combination fifth and sixth grade class at Franklin’s Paul Smith Elementary School.

“It was harder than I anticipated it would be,” Lewis said. During her early years she would stay at school until 11 p.m. The school was open concept at the time, which Lewis said “made it feel almost like you were competing with the other teachers.”

Lewis taught social studies at FMS until nine years ago, when she stepped into the Title I department, which provides supplemental instruction and support for students who need it. Lewis was also in charge of staff development and school recertification at LMS.

Her proudest moments were in the achievement of her students, notably through history projects in conjunction with the Franklin Historical Society. Lewis, as an involved member in the local history community, always sought to direct student learning of history through the lens of city and state history. Some of these student projects appeared in the Franklin Historical Museum.

As an extension of this passion, Lewis will continue to work with the Franklin Historical Society on their Traveling Trunks project, a program where trunks that use the local area and history to introduce core learning concepts – such as map reading, flora and fauna, and historical movements – can be checked out by teachers and schools for use in classrooms.

She hopes these programs both propel students to go out and engage with their city and also develop a sense of hometown pride.

“There’s been so many negative things said about this community. But so much positive is coming,” and it helps students to see that, Lewis said.

Now, with schools locally and nationally struggling to hire and retain teachers, Lewis’ nearly five-decade long commitment not just to the profession but to a single district is extraordinary.

“The biggest challenges when I started were kids talking too much and chewing gum,” Lewis said. “Now it’s gotten a lot more complicated. Children now come with a lot of baggage. They don't get the support they need at home. There’s more interferences now.”

She said that social media, along with the strains of the pandemic, added extra responsibilities for teachers. “They’ve lost so much,” she said. “It changed the dynamics in the classroom… It’s harder to keep their attention.”

To teachers who are frustrated and struggling, Lewis said, “Don’t give up. It does change.” She commended the teachers who succeed her for facing the challenges of today. “So many great teachers don’t get the credit they deserve,” she said.

Lewis said the most rewarding part of her career was knowing that, even if only for a few, she made a positive difference in the lives of her students.

“Above all, I really cared,” she said. “I remember there was this one girl, she wouldn’t give me the time of day when she got here. Now she’s a leader. Of course, she had a lot of teachers. But I’m proud to see that.”

Charnely emphasized this quality in Lewis. “She is so caring,” Charnley said. “She really loves the kids.”

Darsney noted that the drive to better the lives of students is a unifying quality of Franklin staff.

“There are people here, people who could work anywhere,” Darsney said. “But they choose to work at Franklin because it's the kind of district you go to when you want to know you can make a difference in a kid's life.”

Since it is impossible to purchase the same number of hot dogs and buns, what do you do? Do you get more buns or more dogs? And what do you do with the extra? Click the image below to answer