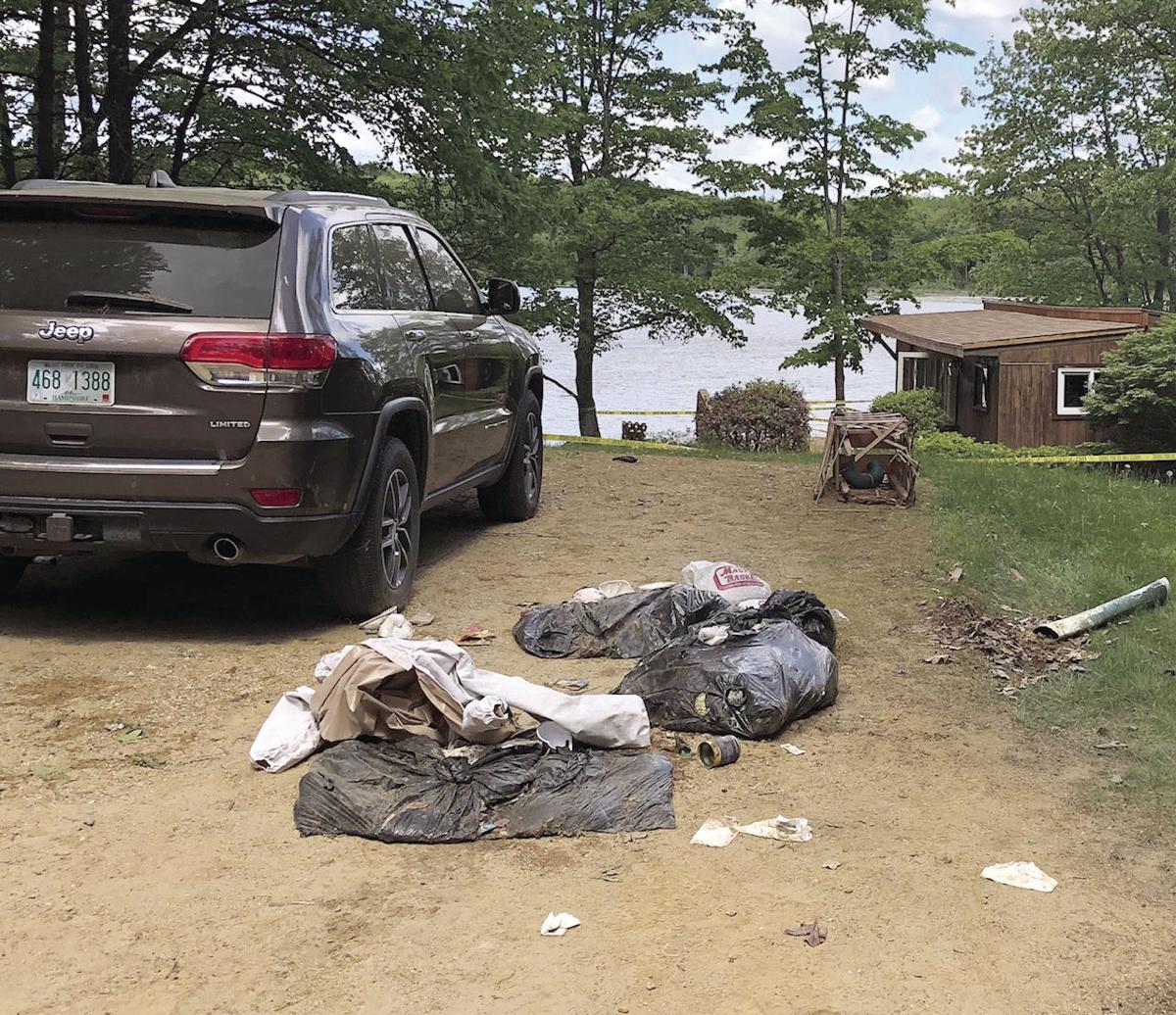 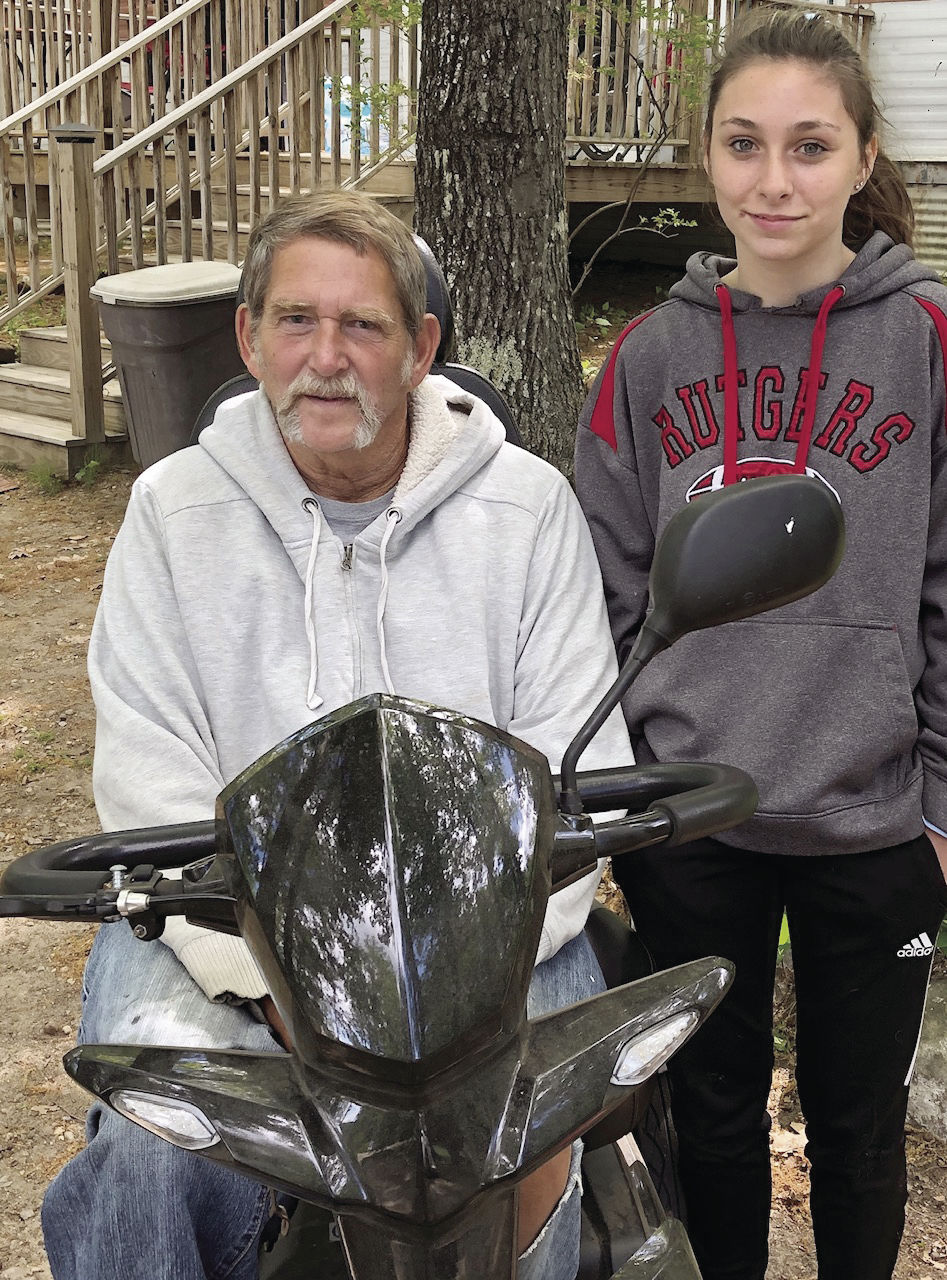 Bob Vayda sits on his scooter chair in front of his home that faces Lakeshore Drive in Gilmanton while his 13-year-old granddaughter Kaylee Vayda stands beside him. The two recalled the harrowing hours Sunday when the occupant of a house diagonally across the street from Vayda’s place started shooting — first at children and later at police — leading to a seven-hour standoff which ended when the man took his own life, police said. (Michael Mortensen/The Laconia Daily Sun photo)

Bob Vayda sits on his scooter chair in front of his home that faces Lakeshore Drive in Gilmanton while his 13-year-old granddaughter Kaylee Vayda stands beside him. The two recalled the harrowing hours Sunday when the occupant of a house diagonally across the street from Vayda’s place started shooting — first at children and later at police — leading to a seven-hour standoff which ended when the man took his own life, police said. (Michael Mortensen/The Laconia Daily Sun photo)

GILMANTON — For seven hours on Sunday, the Shellcamp area was like a war zone after a man fired shots at a group of youngsters, then fired on police officers who converged on the lakefront house in an ultimately unsuccessful attempt to get the barricaded man to surrender.

The seven-hour siege ended about 10 p.m. after a robot and a drone were maneuvered into the single-story house at 139 Lakeshore Drive and confirmed there was a dead man inside the dwelling.

Gilmanton Police Chief Matthew Currier on Monday identified the dead man as Brenton Johnson. The cause of death was a self-inflicted gunshot wound, he said. There were no other injuries, he added.

“There was a ton of shots,” said Bob Vayda, who lives diagonally across the street, at 5 Canoe Lane.

When the first police from Gilmanton and Belmont arrived on the scene, police said the man fired shots at them, prompting a call for reinforcements.

“Officers were unable to proceed closer to the house because of the gunfire,” Currier said in a prepared statement released Monday afternoon.

Between 20 and 22 members of the Belknap Regional Special Operations Group were dispatched to the scene soon after the first shots were fired. As soon as that SWAT team arrived they, too, came under fire, with several bullets hitting the unit’s armored personnel carrier.

Ultimately that SWAT team was augmented by State Police, a SWAT team from Strafford County, the Central New Hampshire SWAT team, and dozens of police agencies from around the state, including the Laconia and Manchester police departments which each sent drone teams. The Gilmanton Fire Department was also called in and stood by at the scene.

Police ordered some residents to shelter in place, while heavily armed SWAT officers helped evacuate others to houses that were further away from where the shooter was.

On Monday morning, Vayda was outside his house along with his granddaughter, Kaylee Vayda. The yellow crime-scene tape around the shooting scene was clearly visible from Vayda’s front yard.

Kaylee Vayda said three youngsters had been going around the rural subdivision along Shellcamp Lake to see if residents would hire them to mow their lawns. When they went onto the front deck at 139 Lakeshore Drive, a man standing behind a screen door pulled a pistol and threatened them. Moments later shots were fired, she said.

Kaylee Vayda, 13, was a few houses down the road with some other children when the first shots were fired. She and the other youngsters rushed up the street to see what was happening.

One of the boys with Kaylee was shouting, “Don’t shoot at my little brother,” she recalled.

Kaylee said she and the other children took shelter in a nearby house while the first floor of the dwelling “was covered in cops.” Eventually SWAT team officers provided cover as the children and others were evacuated to a safer place several hundred yards down Lakeshore Drive.

Bob Vayda said officers told him and his wife to take shelter further up Canoe Lane, but when he told police that their physical disabilities made that impossible, they were told to hunker down in the bedroom at the rear of their mobile home.

Vayda said it appeared the shooter had a shotgun and a long gun.

Mark Harris, who lives at the upper end of Canoe Lane, said at one point he could hear bullets hitting trees near his house.

Harris and Vayda said they could hear when the officers fired teargas canisters into the house in an effort to dislodge the shooter.

Moyer said there was “multiple use” of gas in an effort to get the shooter to surrender. He said he was unsure exactly how the gas was deployed, but said police typically start by firing pepper spray and then move to stronger forms of aerosol agents which irritate the eyes, throat and lungs.

Police used an armored vehicle to push over trees close to the house and to break a hole in the side of the building. A State Police camera-equipped robot and then a small drone controlled by a Manchester police officer were sent inside the building. Video sent back from both devices showed a man dead inside the dwelling.

Vayda said Johnson did not associate with other people in the neighborhood.

“He kept to himself. I would see him walking his dog, but he was always down in the woods,” she said, referring to the trees that were close to the house. “I never saw him on the road.”

Moyer said the Sheriff’s Department delivered a demand for payment of rent to the residence on April 15. He said no one was at the house when the sheriff’s deputy arrived and the officer left the notice at the door, which is standard practice. The notice was delivered at the direction of a law firm, he said.

The property is owned by Max Brown, according to Gilmanton tax records.

A message left at a phone number listed for a Max Brown was not immediately returned Monday afternoon.

According to the real estate website Zillow, the two-bedroom house has 542 square feet of space and was built in 1965.

LACONIA — An 80-year-old man was injured during a home-invasion theft in which firearms, including an assault rifle, were taken.